This week’s edition of Good News Friday is one still enjoying the glow from yesterday’s Yom Ha’atzmaut.

Here is an incredible video from Boomerang, an Israel-advocacy group – bringing us support and love from… Saudi Arabia of all places!

Part of this video appears in another Boomerang video with messages of support from all around the world, including from some other very unexpected places!

Kol hakavod to the team at Boomerang, particularly Ezri Tubi, for these videos. It is worth following them on Facebook at the link and subscribing to their YouTube channel. But more than that, huge thanks to all those wonderful supporters of Israel. Some of them must be particularly brave for going against the fashionable anti-Israel trend in their countries.

Let’s hope that these supporters, particularly those from Arab countries, are the harbingers of better times to come.

It is equally heart-warming and uplifting to see how much support there is for Israel amongst its Arab population (starring the wonderful Sara Zouabi amongst many others):

Once again, huge “likes” and kol hakavod to these wonderful patriotic and loyal citizens of Israel who put the lie to the myth that the Arabs are oppressed or discriminated against by Israel. yes, there is always room for improvement, but we all have so much to be proud of and to be thankful for.

The torchlighters of the Yom Haatzmaut ceremony are always special people who have ei4ther made extraordinary achievements or who represent the best of Israeli society. This year, the nation’s favourite was Marie Nachmias, a tiny little lady, over 90 years old, who fostered 52 special needs children as well as rearing her own 8 children. Her blessings to the nation are beautiful and moving, and… well… they just bring a huge smile to my face.

Throughout her lifetime, Maria Nahmias offered tenderness and support to 52 foster children on the margins of society, as well as eight children of her own. On Wednesday, a nation gasping for serenity got a small taste of the all-encompassing love she offered to those that needed it most over the years. 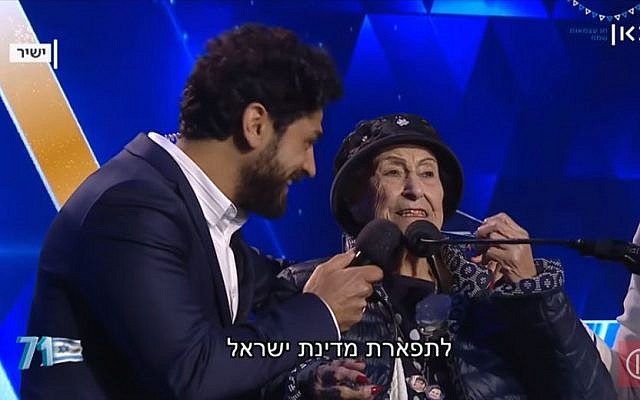 Lighting a torch at the 71st Independence Day celebrations on Mount Herzl, the “mamo” (“mother” in Tunisian-accented French) of Afula managed to bring together fractured, quarrelsome Israel in a way few others could. Her appearance appeared to spark a rare moment of national unity that has been praised for breaking through traditional divides in Israeli society.

The honor, one of the highest acts of recognition Israeli society can confer, was given to the 93-year-old great-great-grandmother for an almost unbelievable feat: quietly, and far from the public eye, taking into her home dozens of children no one else wanted — children abandoned by terrified parents in hospitals because they were born with physical deformities and diseases.

You can read at the link how Marie fled Tunisia ahead of the Nazi invasion in WWII, and then arrived to poverty-stricken Israel where she first lived in a tent camp and then moved to Afula:

In 1973, her son Shaul was wounded during fighting in the Yom Kippur War, an event that would put her on the path to becoming a foster-mother to dozens.

“My son was in a combat unit, and was wounded when he tried to rescue his commander. He was hospitalized for a long time. I took an oath and prayed that he get well, together with all the other soldiers. I vowed that if God gives me my son back, I’d be willing to do any mitzvah or mission that is given to me,” she told the Ynet news site last month.

God heard her prayer, she said, and her son recovered, becoming a municipal social worker in the city. One day, he called her and said he had a little girl who needed a home.

“That’s how it started. She was the first,” she said.

Nahmias would go on to foster 52 children, Jewish and Arab, with every imaginable physical defect and difficulty. They came from the Afula social services department, but not only from there. Children arrived on Nahmias’s doorstep from around the country, and even from beyond Israel’s borders.

“They knew everywhere that she was willing to take in and raise any child. Her message was that every person was made in the image [of God], no matter their origin,” her daughter Ricky told Ynet.

From her eight biological children — two, daughter Sari and son Shaul, passed away — she has over 100 descendants, including great-great-grandchildren.

At the ceremony Wednesday night, host Aviv Alush, who stood beside Nahmias as she began to recite the statement written for her by the ceremony’s planners, broke from the rigid text, turned to Nahmias and said, “Mamo, bless us, bless Israel.”

Nahmias, sitting in a wheelchair and smiling broadly in her heavy jacket against the night’s unseasonable cold, did not hesitate.

“May Israel be blessed, from all my heart, God will hear me, and the righteous [in Heaven], that it [Israel] rises ever upward, that we grow, that our soldiers don’t fall anymore — from all my heart, that the Jews and the Arabs and the Christians and the Druze, tomorrow we will all become one single hand,” she said. “We are all made by God, may he give us peace, and next year, may there be another 10 million [of us]…”

Nahmias was still mid-blessing when the audience, including Prime Minister Benjamin Netanyahu, responded with a raucous standing ovation, drowning her out.

Alush then nudged Nahmias to finish her set statement, which concluded, “for the splendor of Israel.” Nahmias stumbled on “splendor,” paused, smiled sheepishly and apologized, “I’m so excited.”

Watch the video – it brings tears of joy and emotion to my eyes:

As for the unity that Mrs. Nahmias brought to the nation:

The moment, with Nahmias too excited to talk, seemed to unite Israelis across every divide.

A critic in the left-wing Haaretz broadsheet lavished praise on her ability to “break down walls of prejudice and disdain” for Mizrahi Jewish women and deliver “a beautiful and enlightened blessing.”

Right-wing Arutz 7 enthused that she “captivated the audience.”

The Haredi website Kikar Hashabbat informed its readers that Nahmias “overflowed with blessings and thrilled everyone.”

What a wonderful woman! She is the true embodiment of an Eshet Chayil – a woman of valor – and a true tzadeket, a righteous woman.

May we all merit to meet such wonderful people as Marie Nachmias, as well as loyal supporters of Israel from around the world, all through our lives.

I hope these sweet thoughts will help bring us a Shabbat Shalom – and may this Shabbat be quieter and safer for our brothers and sisters in the south of Israel than it was last Shabbat.