Another week has rushed by and it’s time for another Good News Friday installment. This week we’re going for an international flavour.

My first item simply highlights the incredible distance Israel has travelled in a mere 71 years, and demonstrates the strength of Israel’s diplomatic and military standing. This week Israeli F-35’s took part in a military training drill alongside US and UK forces: 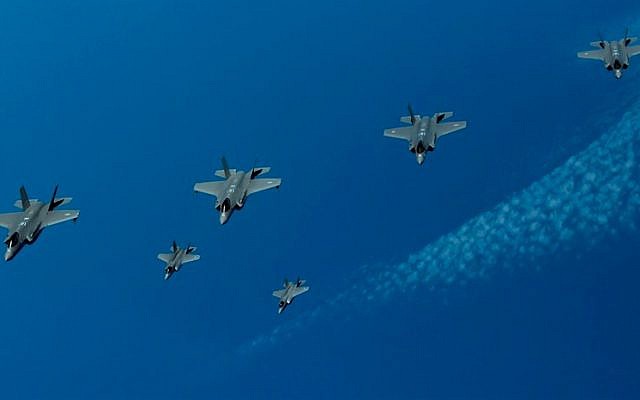 F-35 fighter jets from Israel, the United States and the United Kingdom take part in an aerial exercise over the Mediterranean Sea on June 25, 2019. (Israel Defense Forces)

This marked a significant show of military cooperation between the three countries.

The Israel Defense Forces received the fifth-generation stealth fighter from the United States’ Lockheed Martin defense contractor in late 2016 and declared it operational roughly a year later. In 2018, the Israeli Air Force revealed it had used the F-35 operationally — including at least once over Lebanon — making it the first military in the world to do so.

On Tuesday, the United Kingdom said its F-35 fighter jets had also conducted their first missions, flying sorties over Iraq and Syria as part of the fight against the Islamic State terror group.

The joint drill, which included dogfights between the F-35 fighter jets, was dubbed “Tri-Lightning,” a reference to the aircraft’s official designation, the Lockheed Martin F-35 Lightning II.

“The first international air exercise involving Israeli F-35 planes alongside foreign F-35 planes was held yesterday. The exercise was held over the Mediterranean Sea and simulated survival scenarios and defense against varying threats from advanced aircraft, including the F-35 plane,” the IDF said in a statement.

The Israeli Air Force said it planned to hold additional international exercises with the stealth fighter jets in the future in order to “advance its capabilities.”

This is the kind of news that Israel’s founders, and even its later leaders, could only have dreamed about. Kol hakavod to the IDF and to the military forces of the US and the UK, may this training help in eliminating all our enemies.

One of Israel’s erstwhile adversaries has been making friendly overtures recently. Bahrain in the Gulf was the venue of the US-led economic workshop, and its foreign minister Khalid bin Ahmed Al Khalifa made some unusually friendly comments about Israel:

“We see it as very, very important,” Khalid bin Ahmed Al Khalifa told The Times of Israel on the sidelines of the “Peace to Prosperity” workshop.

Peace to Prosperity workshop in Manama, Bahrain, on June 26, 2019. (Courtesy)

“We see it as very, very important,” Khalid bin Ahmed Al Khalifa told The Times of Israel on the sidelines of the “Peace to Prosperity” workshop.

Khalifa also stressed that his country recognizes Israel’s right to exist, knows that it is “there to stay,” and wants peace with it.

In an interview in his suite at Manama’s posh Four Seasons hotel, Khalifa did not commit to normalizing diplomatic ties with Israel in the near future, but unequivocally affirmed Israel’s right to exist as a state with secure borders. 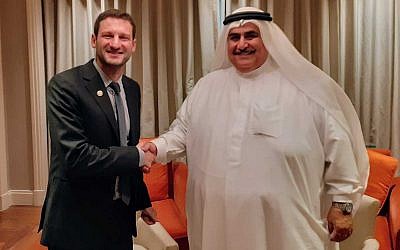 Bahraini Foreign Minister Khalid bin Ahmed Al Khalifa (R) speaks with the Times of Israel’s Raphael Ahren on the sidelines of the Peace to Prosperity workshop in Manama, Bahrain, on June 26, 2019. (Raphael Ahren/Times of Israel)

“Israel is a country in the region… and it’s there to stay, of course,” he said.

“Who did we offer peace to [with] the [Arab] Peace Initiative? We offered it to a state named the State of Israel, in the region. We did not offer it to some faraway island or some faraway country,” Khalifa continued, referring to a Saudi-backed peace framework.

“We offered it to Israel. So we do believe that Israel is a country to stay, and we want better relations with it, and we want peace with it.”

While Bahrain might be only Arab state, besides Egypt and Jordan, to publicly acknowledge Israel’s right to exist, “we know our brothers in the region do believe in it” as well, he said.

Jason Greenblatt, President Donald Trump’s top Middle East negotiator, led Jewish prayer services at a synagogue in Bahrain this week during the conference there that rolled out the economic portion of the Trump administration’s peace plan.

Greenblatt mustered an Orthodox minyan — a quorum of ten adult Jewish males — for morning services Wednesday at the synagogue, which dates to the 19th century. Participants were among the businessmen, officials, journalists and think-tank employees attending the conference.

“It was an amazing experience to see everybody here together,” she told i24, an Israel-based news channel. She could not remember the last time the synagogue had shacharit, or the morning prayer service

Greenblatt posted a picture of the service on Twitter:

A special opportunity to daven(pray) this morning with a minyan(quorum) in a synagogue in Bahrain. Great way to start today. I was asked what I prayed for- two things: my family, who I miss deeply and of course for peace. This is an example of the future we can all build together pic.twitter.com/kqHlEZyvoT

Watch a video of the prayer service:

While there is still a while to go until Israel has proper open and friendly relations with the Gulf States, this is all very good news and shows that we are heading in the right direction.

And now for something completely and utterly different. I just discovered a very funny yet educational Facebook page, written in Hebrew, called “Statusim in Aramaic“. The owners publish translations of popular songs, poems and stories into Aramaic, just for the fun of it it seems.

This week the owners issued a challenge. if they get enough likes they will produce an Aramaic language version of Waze, the social-media operated traffic update app. The challenge was duly taken up and within hours they received over a thousand likes – and the Aramaic version was launched. You really have to be a Hebrew speaker – and understand a smattering of Aramaic too – to appreciate the very funny side of hearing driving instructions in such an ancient language. (Yes, I know Hebrew is also ancient, but it has been revived and is used in everyday activities, as opposed to Aramaic which is used only for study).

צא ולמד –  Listen and enjoy 😀  Listen out for the translations for “roundabout”, “speed trap”, and of course the measurements are in Amot rather than in meters. 🙂

Wishing you all a safe peaceful and quiet weekend. Shabbat Shalom everyone!