Posted on 6 September 2019 by anneinpt

I have a crazy, very difficult week this week (family illness again) but I still want to post a Good News Friday installment, if only for the sake of my sanity. It’s going to be a bit of a mix this week because I missed a fair bit of the news while sitting in the hospital.

The most salient event this week was a staged “evacuation of wounded soldiers” by the IDF after a missile attack on one of their positions in the north by Hezbollah, firing from Lebanese territory. 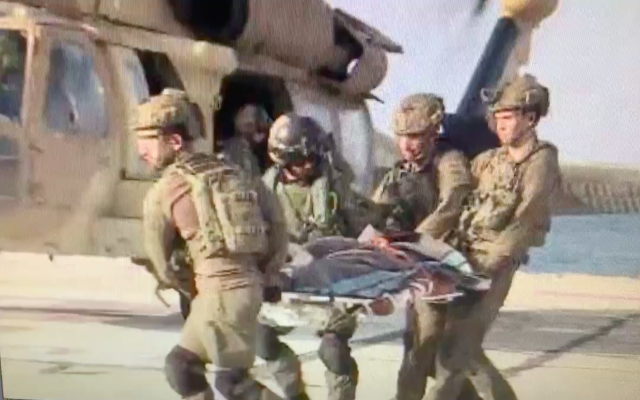 A ‘wounded’ IDF soldier, in a staged evacuation, at the scene of an APC that was struck by a Hezbollah anti-tank missile on the Lebanon border on September 1, 2019. (Screen capture/Twitter)

It all began last week when Israel retaliated against drone attacks on Israel by the IAF bombing Iranian targets in Syria, Lebanon and even Iraq in order to prevent a mass drone attack against Israel.

The Iranians and their proxies felt their honour needed avenging (even though it was they themselves that started this round) and launched a counter-attack against Israel, shooting anti-tank missiles at IDF positions in northern Israel.

From my first link above:

After the armored vehicle was struck Sunday afternoon, the army dispatched a helicopter to the scene and two apparently bleeding and bandaged soldiers were filmed being evacuated.

The Iran-backed terror group quickly took responsibility for the missile strikes, saying in a statement that its fighters “destroyed an ‘Israeli’ military vehicle on the Avivim barracks road [in northern Israel] and killed and injured those in it.” Hezbollah even made a point of saying it did not interfere with the medical evacuation operation.

The IDF initially declined to comment further on the operation, and only a few hours later said that there had been no casualties in the attack. Shortly after the IDF chopper evacuated the apparently wounded soldiers to Haifa’s Rambam Medical Center, they were released without receiving any medical care, the hospital said.

Later Sunday evening, after Israel carried out extensive strikes in Lebanon in response to the missile attack, it emerged that the two “wounded” soldiers had in fact been part of a staged rescue operation planned ahead of time. Israel apparently hoped that Hezbollah, thinking it had inflicted casualties, would conclude that it had retaliated sufficiently for a pair of Israeli strikes on Hezbollah and Iranian targets late last month, and hold its fire.

The staged evacuation followed Hezbollah’s firing of several anti-tank guided missiles that hit an army base as well as the military APC.

This whole story makes me smile at the chutzpah of the IDF in playing psychological warfare with Hezbollah. However I do wonder at the wisdom of publicising that it was all a fake. Surely that defeats the purpose.

In any event, thank G-d there were no casualties on our side, and we inflicted plenty of damage on our enemies. Kol hakavod le’Tzahal!

Even better, the US blocked a UN Security Council statement on the incident that did not specifically condemn Hezbollah. Kol hakavod to the US, huge thanks from Israel for standing by us. What a refreshing change from times past.

Still on the subject of the IDF, the Israeli Air Force is scheduled to conduct joint exercises with the Royal Air Force over the skies of Britain: (h/t Tip Brian G):

Israeli military aircraft will be flying over the UK in a joint exercise for the first time ever this week, as part of a three week multi-national coordination effort with Britain’s Royal Air Force as well as German, Italian and US planes. 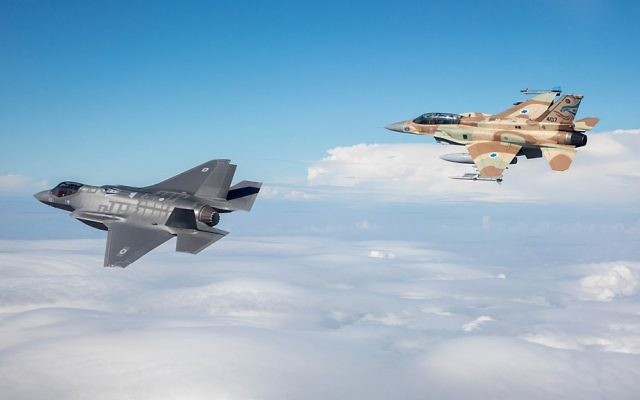 For UK-Israel defence cooperation, Exercise Cobra Warrior marks a landmark moment, and the training based at RAF Waddington in Lincolnshire is expected to last until 20 September.

The five nations possess some of the most advanced fighters in the world and the RAF described the exercise as “high intensity large force tactical training” involving around 50 aircraft, which the Israeli delegation said would be a great help.

“We are happy and proud to participate in the Cobra Warrior exercise,” said Brigadier General Amnon Ein-Dar, the Israeli Air Force (IAF) head of training.

“This is the first time IAF fighter aircraft are deployed to and flying in Britain. The deployment will help improve IAF readiness and capability. We view this exercise as the highest standard of training, an excellent opportunity for mutual learning and bolstering cooperation between partners.”

“The RAF welcomes the participation of our Air Force colleagues from other nations,” said Group Captain Robert Barrett. “We welcome the opportunity to train alongside all of the participating nations’ forces on this challenging exercise.”

The UK and Israel already spend hundreds of millions of pounds purchasing each other’s defence equipment, and next year the military partnership looks set to solidify, as Israel hosts RAF pilots taking part in Blue Flag 2020, Israel’s largest international air exercise. It will be the first time that RAF jets will have trained in Israeli airspace.

This is excellent news for both countries. Kol hakavod to all the military brass who arranged this exercise. May it help promote peace and safeguard the security of both nations.

And now for something completely different. Here is the story of some dedicated parents of children on the spectrum or with autism, who fought to establish a “communications class” in their own town, rather than having to bus them long distances to their special classes. The town in question is Karnei Shomron, and my very own daughter Hadassah is the secretary of the school in question, whose head teacher Malka Shirazi stepped up to the challenge, with the help of the Mayor Yigal Lahav:

After endless psychological tests and umpteen trips to what we called “toy doctors,” both were classified with what was once called Asperger’s syndrome, and since 2013 has been found under the diagnostic umbrella of autism spectrum disorder (ASD). It is estimated that one of every 100 children in Israel is on the autistic spectrum. They were referred to a gan tikshoret (communications kindergarten), small classes replete with treatments, specialists and therapies integrated into daily curriculum to assist with social behavior.

There was no such option for tikshoret in our town. While there was a “small class” designated for children with learning and language disabilities, it was inappropriate for children with communication issues. Hence, the boys were bused out before 7 a.m., to a kindergarten in Elad, 31 km. away, and they came home again around 5 p.m. It was a very long day for kindergarteners.
I began talking to other parents of children with ASD in Karnei Shomron. They painted a bleak picture for services in the Shomron.

Special tikshoret schools and classes are sparsely scattered throughout the country. If there are none near the home of the child, the child is provided transportation by the school system with an escort. For me, first grade meant either “shipping out” my children to a special class, or mainstreaming them locally with an aide. While mainstreaming is the ultimate goal for most children, in large Israeli classes without specialized help, children with autism can get lost.

I told the local school authorities, in my halting Hebrew, that to me, it didn’t make sense to send children outside the community when the entire focus of a communications class is to help children socially integrate. The social system for Israeli youth is so vital. I didn’t want to ship my boys out of town anymore. Then I broached the subject of bringing a tikshoret class here – to Karnei Shomron. I was told that first we had to find other children and then we had to find a school willing to host such a class.
I joined Facebook groups, wormed my way into WhatsApp groups and I begged every mommy I knew to send out queries in Hebrew and in English to help find other parents of children with ASD in the Shomron who were also looking for a national religious first grade. We needed four to form a class. The class maximum is eight.

Within hours of releasing my phone number on social media, parents called me from all over the Shomron, and even from the far reaches of Binyamin, all with children designated ASD, some going to first grade, others a year or two away. As I fielded one call, another would come in. With a lot of help from my Hebrew-speaking mommies, we compiled lists of tikshoret-eligible children interested in staying local. The first week we had our four and the number kept growing. Now we had to find a school to agree to take us.

The first school turned the idea down flat. It was clear during our meeting that our children were not welcome there.

Yigal Lahav, the mayor of Karnei Shomron, has a niece with autism. He understood the need to keep our children nearby and to give them the education they needed and deserved. He assured us that we could make this happen and that he would stand behind us.

We approached the principal of the Lapidim School in Karnei Shomron, Malka Osnat Shirazi.

Even though it meant adding two new caravan classrooms to Lapidim, a school already bursting at the seams, Shirazi was enthusiastic about the notion of adding on.

“I believe it is so important to integrate children on the autistic spectrum within our school,” she assured me. “It is vital that these children, who often have difficulty communicating and forming friendships, remain in a familiar environment and interact with our warm community. Here they will receive full therapeutic and educational services. And I am certain having them here will enrich the lives of everyone in the school.”

With enough children to make it happen, and a school to accommodate us and Lahav’s and the community’s support, we recently received word that our first grade tikshoret class is really happening here in Karnei Shomron. As I write this, teachers are being trained by the Matya organization that monitors ASD children in the Shomron. And the icing on the cake, a brand new tikshoret kindergarten is also starting here in Neveh Menahem, to be managed by Ariel University educators. Small children no longer need to be schlepped.

“Children with ASD should be educated near their homes, families and friends,” Lahav asserted as he showed me the memo confirming the programs. “They deserve that personal touch.”

And with a newly minted final stamp of approval from the Education Ministry, a special communications class is finally coming to Lapidim in Karnei Shomron. And, for other communities with very special children, “if you build it, they will come.”

This is such a wonderful, feel-good story with a happy ending for all concerned. Huge kol hakavod to the parents of these special hildren who did not give up in the face of adversity, but fought to attain what should be theirs by right. And of course huge kol hakavod to Lapidim head teacher Malka Shirazi and to Karnei Shomron Mayor Yigal Lahav. Halevai that every school district will follow their example!

Wishing everyone a peaceful quiet Shabbat, and a healthy week ahead. Shabbat Shalom!