This post is not going to be a regular Good News Friday post though it will contain what I consider several good news items.  In any event the news keeps overtaking me before I can get around to writing a post.  The one thing I am not going to write about is the indictments against Binyamin Netanyahu. My own views are pretty clear on the subject but I’m not prepared to air them in public as yet. I’m waiting to see how things develop.

What I do want to write about is what appears to be a new Israeli policy regarding the rocket fire from Gaza. Until last week, every round of rocket fire was followed by the IAF bombing empty buildings, even if they were ostensibly strategic targets. There was definitely no disincentive to the terrorists to cease their rocket fire. The only way the attacks stopped was when Israel conceded to their demands for cash, easing of the blockade in some way, or some other extortionate demand.

Well, Israel has a new Chief of Staff, Gen. Aviv Cochavi and the name of the game is “no more Mr. Nice Guy”. Following the Islamic Jihad rocket fire the air force counterstrikes killed 34 Palestinian terrorists, a death toll far higher than in previous rounds of fighting.

An added benefit, if that’s the right term, to this round, codenamed Operation Black Belt, was that Hamas stayed entirely out of the fighting, to the extent that they banned the usual riots and violence on the Gaza border, even preventing the launch of incendiary kites and balloons into Israel.

After the close of Operation Black Belt, rockets were suddenly launched into northern Israel from Syria, possibly in retaliation for the attempted assassination last week of a terrorist leader in Damascus, and possibly in revenge for the Trump administration’s acceptance of the legality of the settlements. In retaliation Israel hit back extremely hard at Iranian targets in Syria, killing at least 11 fighters:

The report claimed that multiple weapons depots operated by Iran’s Quds Force were destroyed in the attacks, along with Syrian surface-to-air missile batteries.

Eleven fatalities have been confirmed, SOHR said, including seven ‘foreign combatants’, a phrase used by the observatory usually to refer to Iranian soldiers operating in Syria, though the group could not confirm if all of the seven foreign soldiers were Iranian.

A senior Israeli security official confirmed that the rules have changed, we’ll hit back for every attack:

“We’re changing the rules of the game and the equation. We will respond to even relatively small attacks, even if the effect is limited, our response will be very harsh. We will not accept Iran firing at the State of Israel.”

Despite the increased intensity of Israel’s retaliation, the official said the IDF was still not attacking targets in Iran itself, but may strike closer to home if Iranian forces continue attacks on Israel.

“We still haven’t hit and haven’t threatened the head of the Iranian ‘octopus’, but it’s possible to see the attacks moving from the hand to the arm, and approaching the head.”

A fascinating bonus to the Israeli airstrike in Syria is what appears to be an Israeli counter-missile defense system for their airforce. The Syrian missile system became confused and their missiles were “returned to sender”!

Something very strange seems to have happened during the Israeli Air Force’s large-scale attack on Syrian and Iranian targets in Syria overnight.

In a video released by IntelliTimes, which is reportedly of the Syrian missile system launching rockets at the Israeli Air Force last night, one clearly sees Syrian missile after missile become “confused”, turn around, and return to the ground and explode…

The blog estimates that this may indicate a loss of radar lock after the launch, or another proactive action that prevented the missiles from starting their course toward the target.

Security sites reported in the past that Israel wanted to install radar blocks on its F-35 aircraft which would enable the aircraft to bypass enemy radar systems. Similar reports have suggested that the IAF F-35 planes are equipped with a system that prevents its detection by enemy radar.

There is a lot of speculation as to how Israel could have done this. Whatever the method, this could be a game changer.

Watch the video showing how this happened:

This is an incredible development, and even if there had been speculation about Israel’s capabilities beforehand, to see it in action is something else altogether.

Thank G-d for these miracles and thank the brilliant engineers who developed these systems!

With the new strong Israeli stance in mind, it is very interesting to learn that some Arab thinkers are calling to abandon boycotts of Israel and to engage with it instead:

Boycotting Israel is a failure, and has only helped that country while damaging Arab nations that have long shunned the Jewish state, according to a small new group of liberal-minded Arab thinkers from across the Middle East who are pushing to engage with Israel on the theory that it would aid their societies and further the Palestinian cause. 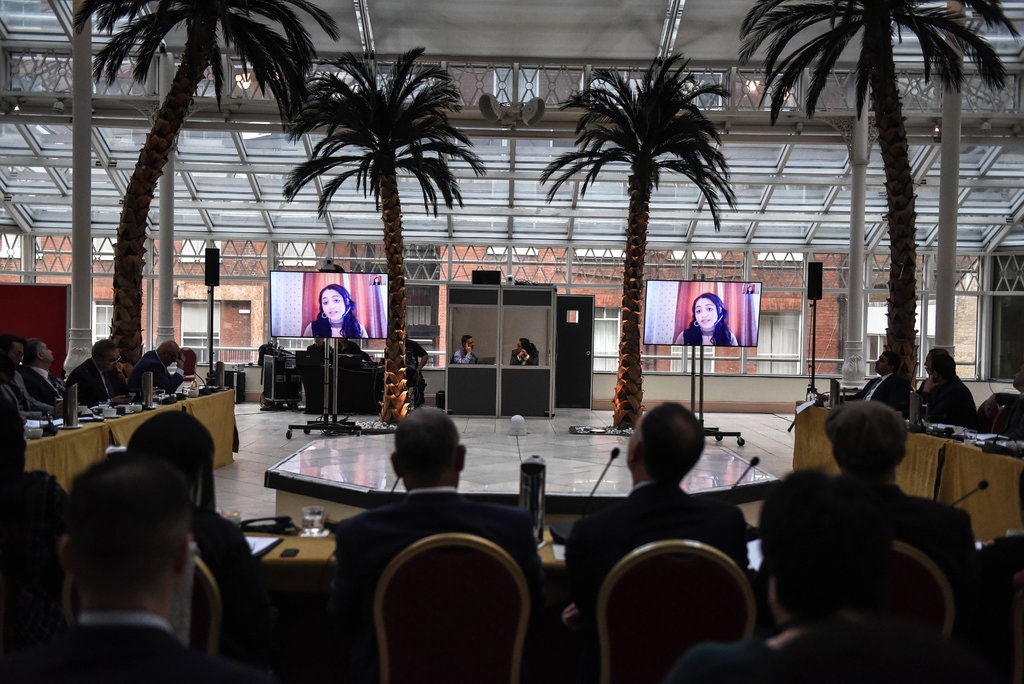 Eglal Gheita, an Egyptian-British lawyer, speaking via video link to the Arab Council for Regional Integration in London.Credit…Mary Turner for The New York Times

The group has brought together Arab journalists, artists, politicians, diplomats, Quranic scholars and others who share a view that isolating and demonizing Israel has cost Arab nations billions in trade. They say it has also undercut Palestinian efforts to build institutions for a future state, and torn at the Arab social fabric, as rival ethnic, religious and national leaders increasingly apply tactics that were first tested against Israel.

“Arabs are the boycott’s first — and only — victims,” Eglal Gheita, an Egyptian-British lawyer, declared at an inaugural gathering this week in London.

Calling itself the Arab Council for Regional Integration, the group does not purport to be broadly representative of Arab public opinion. Its members espouse a viewpoint that is, to put it mildly, politically incorrect in their home countries: Some have already been ostracized for advocating engagement with Israel and others said they feared retribution when they return.

Still, the few dozen members include more than a few well-known figures in places as far-ranging as Morocco, Libya, Sudan, Egypt, Lebanon, Iraq and the Persian Gulf, many of whom have begun to speak out, to varying degrees, in favor of engagement with Israel. The most recognizable name — to Western eyes, at least — may be that of Anwar Sadat, nephew and namesake of the Egyptian president who struck the first Arab peace treaty with Israel. He is also a critic of President Abdel Fattah el-Sisi who was expelled from Egypt’s Parliament in 2017.

One of the council’s main organizers, Mustafa el-Dessouki, the Egyptian managing editor of an influential Saudi-funded newsmagazine, Majalla, said that as he has wandered the region in recent years he has met many like-minded Arabs “who had kind of been waiting for somebody like me to come along.”

Of course it’s not all rainbows and roses, most of these liberal Arabs still hold some very harsh views of Israel; and some of these thinkers are being ostracised in their home countries for their daring views, but the very fact that they have organized themselves into an official group and have gone public with their opinions shows that the Arabs are starting to face up to reality. Give it another 100 years and there may yet be peace. But every great journey starts with a small step, and this group certainly forms the first steps towards acceptance of Israel.

Kol hakavod to them all on their courage in very difficult circumstances.

And on this hopeful note I wish you all Chodesh Tov and Shabbat Shalom. This week we welcome the new month of Kislev, the month in which Chanuka falls, the festival which celebrates the victory of the Jews over the Greeks, the few over the many, the weak over the strong. This seems to reflect this week’s headlines!