Another very Good News Friday edition this week: we are delighted to welcome our latest grandson, born on Sunday to our daughter Vered and Pini, a little brother to Shaked. ❤

An Arsenal fan at 4 days old!

The brit will take place pG on Sunday, and I will update with the baby’s name.

Wishing Vered and Pini huge Mazal Tov!  May the baby bring them lots of nachat and may he be a great playmate to his big sister. Mazal tov too to our parents (the great-grands) and of course to the entire family. 🙂

Moving on to “regular” good news, here’s a very funny item about a 2,000 year old ketchup factory that was discovered in Ashkelon 😀 (via Reality):

Almost two millennia before tomato ketchup made its appearance on tables, ancient Romans had their own mouth-watering condiment that turned every dish into a delicacy: garum, a fermented fish sauce that bears some resemblance to the modern Asian one. A recent discovery revealed that the popular dressing was not only consumed but also produced in ancient Israel: fermenting vats employed for its preparation were discovered in Ashkelon, the Antiquities Authority (IAA) announced on Monday.

“This is a rare find in our region, and very few installations of this kind have been found in the Eastern Mediterranean,” the IAA’s Tali Erickson-Gini explained in a statement. “Ancient sources even refer to the production of Jewish garum. The discovery of this kind of installation in Ashkelon is evidence that the Roman tastes that spread throughout the empire were not confined to dress but also included dietary habits.”

“Long before pasta and pizza, the ancient Roman diet was based largely on fish sauce. Historical sources refer to the production of special fish sauce, that was used as a basic condiment for food in the Roman and Byzantine eras throughout the Mediterranean basin. They report that the accompanying strong odors during its production required its being distanced from urban areas, and this was found to be the case since the installations were discovered approximately 2 km. from ancient Ashkelon,” he explained.

The juxtaposition of an ancient sauce-factory with the modern version of ketchup just tickled my funny bone. This little country never ceases to amaze me with its incredible discoveries!

The study – led by Dr. Haggi Mazeh, head of the department of General Surgery at Hadassah-University Medical Center on Mt. Scopus, and Dr. Iddo Ben-Dov, senior physician in the Department of Nephrology – was published in the journal Cancer, Epidemiology, Biomarkers and Prevention.

Thyroid biopsies are done using a procedure called fine needle aspiration. Because the needle is so thin and therefore the specimen is very small, in as many as 30% of cases, the test results are unequivocal.

Mazeh said that if one’s results are inconclusive, then it is recommended that the patient repeat the biopsy. If it remains inconclusive, the patient is left with two options: to purchase an expensive – $3,000, according to Mazeh – commercial molecular examination or undergo partial or complete gland removal surgery.

In the first phase of the study, conducted at Hadassah-University Medical Center in Ein Kerem, 274 thyroid specimens were taken from patients – some benign and some malignant. The researchers identified the different expressions of microRNA in malignant and benign thyroid nodules and create a microRNA panel against which they could compare nodule samples.

“When we saw that it was possible to differentiate between benign and malignant relationships, we took samples from another group of 35 associations with an unequivocal answer and saw that the differences in the expression of the microRNAs were able to correctly identify the nature of the relationship – whether it is benign or malignant – at 94% accuracy,” Mazeh concluded. “This is a breakthrough, since this level of accuracy is higher than the other commercial and expensive tests available on the market today.

“We tested patients and tried to predict if they have cancer or not,” Mazeh continued. “It turned out that our microRNA panel is very accurate.”

This is a wonderful development with the potential to save thousands of lives, and to prevent so much unnecessary suffering. Kol hakavod to Dr. Haggi Mazeh and Dr. Iddo Ben Dov and their research team at Hadassah on this fantastic discovery.

Speaking of modern times, the high-speed rail line between Jerusalem and Tel Aviv has FINALLY opened this week! – only about a decade late! (via Suzanne): 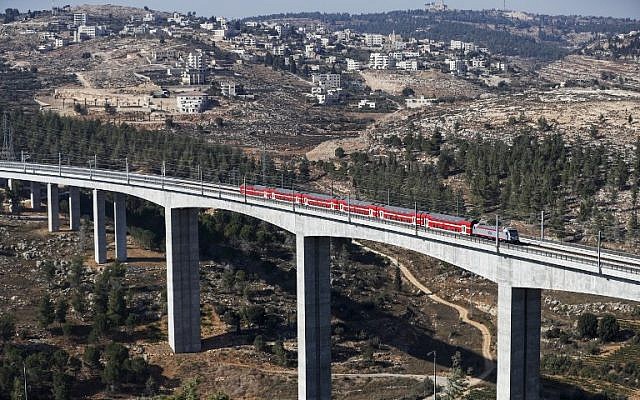 A section of the high speed Jerusalem-Tel Aviv train line on the outskirts of Jerusalem, on September 25, 2018. (Ahmad Gharabli/AFP)

While the Israel Railways’ Jerusalem – Tel Aviv high-speed train line first opened last year, direct service was not offered, and passengers seeking to travel from one city to the other were forced to transfer to a second train at Ben Gurion Airport.

On Wednesday, however, the train line began direct service between the capital and Tel Aviv, ending the need for transfers at Ben Gurion. 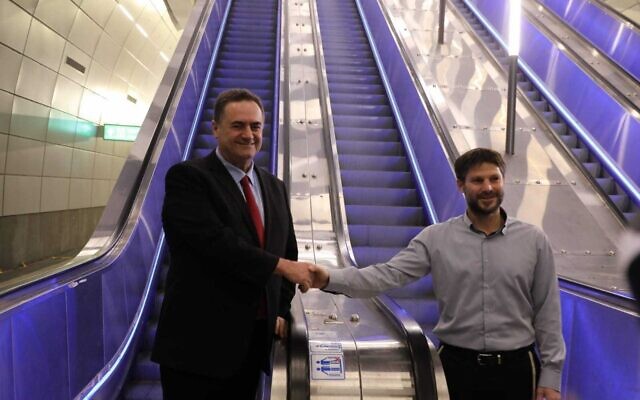 “For us, this is a moment of celebration,” said Maixner. “Today we are sending the first train with passengers from Jerusalem to HaHagana station, linking Jerusalem to Tel Aviv with the high-speed train line.”

“This is the first time since the War of Independence that a new transportation channel has been opened linking the capital to Tel Aviv, and that is beautiful. The project is huge and very complicated in terms of engineering and infrastructure, and also in terms of the technology involved.”

The line is an engineering achievement for Israel, as the train’s speed — expected to deliver passengers from Jerusalem to Tel Aviv in about 30 minutes when it is finally fully operational — is achieved by cutting a straight line through the mountainous highlands around Jerusalem in a steady downward slope toward the coastal plain. Mountains are traversed via five long tunnels at a combined length of 38 kilometers, and valleys crossed by eight bridges stretching 7.5 kilometers, the highest of them, at over 100 meters above the ground, setting a record for Israel’s highest bridge.

The line, whose launch date has been delayed numerous times over the years, has been operating on a provisional basis from Jerusalem to Ben Gurion international airport since September 2018. Though limited to just 400 passengers per run, and despite repeated and highly publicized delays and even breakdowns, some 3 million trips were logged in the 16-month testing period.

Huge kol hakavod to everyone involved throughout all the years of delays, complications and overrun budgets. Maybe now there is finally a direct train between the two cities, Mashiach can actually arrive! (Maybe riding on the train?).

Talking of which, one last piece of good news for this week, quietly and behind the scenes, Jewish prayer has returned to the Temple Mount – not overtly and not officially, but it is a very good step in the right direction:

Jewish worshipers are able to pray on the Temple Mount with what appears to be the tacit consent of police forces at the site, The Jerusalem Post observed during a visit there on Thursday.

Despite the insistence by Israel Police that there has been no change in the decades-old policy, Jews now pray – in full view of the police – in an unobtrusive and inconspicuous manner.

A senior Wakf Department official said he was unaware of any change in the status quo on the Temple Mount, but warned that any change would lead to renewed protests and spark a strong response from Arabs and Muslims.

Led by Rabbi Eliyahu Weber and joyfully singing “Let us go up to the Temple,” a quorum of 10 Jewish men ascended the Temple Mount on Thursday morning at the beginning of non-Muslim visiting hours at 7:00 a.m. This reporter joined the group as it toured the compound.

The group began the typical counter-clockwise tour of the site accompanied as usual by several police officers. It began at the Mughrabi Gate and worked its way around the eastern side of the esplanade, stopping at various points and eventually leaving out of the Chain Gate on its western side into the Muslim Quarter of Jerusalem’s Old City.

Upon reaching the eastern gate of the Dome of the Rock shrine, Weber and the group of Jewish men, and two women, stopped for between five and 10 minutes to recite the cantor’s repetition of the central Amidah prayer, including the components for congregational participation.

A kohen, a member of the priestly line, gave the blessing to the worshipers that is part of the daily morning service.

The service – a truncated version of the full morning prayer service – was conducted in a very discreet manner, but the worshipers were nevertheless clearly participating in a discernible Jewish prayer service.

After the service was finished, the group continued with their tour, stopping again for 15 or 20 minutes to listen to a lesson by Weber on a page of Talmud.

Weber and other worshipers pray the morning service every day, and the afternoon service is also recited.

Huge kol hakavod to Rabbi Eliyahu Weber for his persistence in holding Jewish prayer at our holiest site, and for having the common sense to do so discreetly and incrementally.

May all our prayers be answered לטובה  – for the good.

Wishing everyone a Shabbat Shalom, and Happy Chanukah! (It starts on Sunday night).

May we continue to celebrate only in smachot.