A very wet and cold week has passed by and has brought us huge amounts of rain.  So huge in fact that the Kinneret rose 23 cm in one day! When you consider the size of the lake the amount of water that has fallen is almost unbelievable.

In the last 24 hours, the Sea of Galilee has risen by 23 centimeters. This morning (Thursday), the current sea levels are at 211 meters and 10 cm below sea level, according to the Kinneret Authority.

Since the beginning of the rainy season, the Sea of Galilee rose 80 cm. The current water level is at 1.9 meters high from the bottom red line and 2.3 meters away from the top red line, marking a full Sea of Galilee.

See the pictures below to see the dramatic rise in the water level of the Kinneret:

The rains – which in Israel are usually called “rains of blessing” – גשמי ברכה – broke a 50 year record, which despite the blessing of filling up the Kinneret and our underground aquifers, also brought widespread havoc and flooding, and sadly brought tragedy too.

At least a thousand people attended Motti’s funeral and President Rivlin wrote a condolence letter to the family:

“Dear brave Ben Shabbat family,” the president wrote. “Moti risked his live to save a family whose car was stuck in the rising tides. In those seconds, when action comes before thought, a person’s true character is seen.

“His bravery, his refusal to be a bystander, his courage, touched all our hearts and are examples of humanity and mutual responsibility of the highest order,” Rivlin wrote. “Please, on behalf of the people of Israel, accept my sincere condolences at this difficult time.”

May his memory be for a blessing.

The internet is awash (pun intended heh heh) with videos and pictures from the floods. Here are a couple – one from the Tel Aviv area (with accompanying song “let the heavens rejoice, the sea and its fullness will thunder” which I guess is pretty appropriate).

EDIT: I missed a very clever pun! DavidinPT in the comments pointed out that the caption “ישמחו השמים – Yismachu Hashamayim” (let the heavens rejoice) – has been written “wrongly”, forming a Hebrew pun. The word Shamayim was written שמאים with an א instead of י – making the word sound more or less the same. But the meaning is radically different.  “Let the insurance adjustors rejoice”. 🤦🏽‍♀️😝

The second video is an aerial view of Nahariya after the floods.

The streets of Tel Aviv and the surrounding area. pic.twitter.com/uok8qu1G6D

Mt. Hermon in the north is covered by a deep layer of snow, although the site is still closed to visitors because of the bad weather. The views are terrific though: 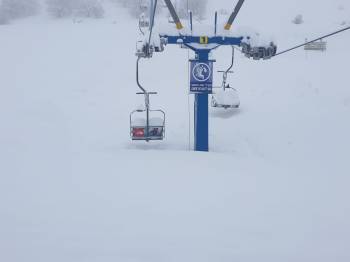 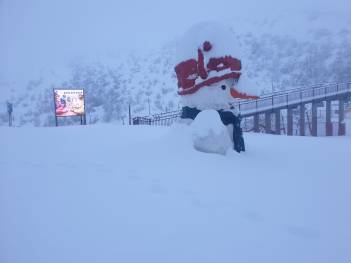 Let us pray that the rains will continue but only as “rains of blessing”, with no more damage and no more tragedies.

Moving now to something completely different. In very timely news considering the ramifications of the Soleimani killing last week, Israel this week unveiled its latest weapon: a Laser gun to shoot down missiles! (Via DavidinPT):

The Defense Ministry’s Research and Development Directorate revealed a breakthrough in laser technology on Wednesday, saying it is expected to complement the country’s Iron Dome anti-missile system.

The new laser-based system is built for the interception of rocket, mortar, and artillery threats, aerial drones and anti-tank missiles. It will undergo testing in the coming months with the goal of having it operational within a year and a half.

The new technology was unveiled by the directorate chief Brig. Gen. Yaniv Rotem, who said it would alter Israel’s ability to defend itself strategically.

… The laser-based interception, which is silent and invisible, is based on electric laser technology rather than the chemically based lasers used up to now.

As a result of the technological breakthrough, the Defense Ministry has launched three programs for the development of high-energy laser demo systems in cooperation with defense industries, Rafael and Elbit Systems:

Last Thursday, meanwhile, the Israel Police unveiled a new laser system designed to intercept airborne incendiary threats sent from the Gaza Strip. According to Channel 12 News, although the system is operational a deploy date was not immediately given.

Dubbed Light Blade, the system is said to resemble Iron Dome in its technology. It will tackle incendiary balloons and kites, which have started countless fires in the southern border vicinity communities over the past two summers, as well as drones.

While most developments over the years – both in Israel and abroad – have been ineffective, significant achievements have been made over the past year and a half as a result of collaboration between the ministry and defense companies, including Rafael and Elbit Systems, as well as academic institutions. The breakthrough recently made by the ministry is based on the precision of the laser beam, which can be focused on long-range targets and which can overcome atmospheric disturbances such as clouds and dust storms.

According to Oster, the ministry was able to take several laser beams and, with an advanced algorithm, connect them to get one strong beam that is able to intercept and take down a variety of threats.

“During a war, missile interceptors will at one point run out, but with this system, as long as you have electricity, you have a never-ending supply,” he said.

“This is a weapon that you can’t see or hear,” Rotem said, adding that while it is not free since it runs on electricity, every interception will only cost a few dollars, as opposed to interceptor missiles that can run into the thousands.

The use of two different and complementary technologies – kinetic air-defense-like systems, such as the Iron Dome, and laser platforms – “is a game-changer,” Rotem said.

This new laser “anti-missile” sounds like something out of science fiction! What a fantastic invention! Kol hakavod to the various Ministers of Defence (Avigdor Liberman, Naftali Bennett, et al) and of course to all the personnel at Rafael and Elbit who were involved.

And now to conclude, harking back to last week’s post about the Siyum HaShas, the huge crowds who gathered at various events round the world caused a wonderful Kiddush Hashem – a sanctification of G-d’s name through their cordial and respectful behaviour.  Last week I mentioned the reactions of some of the Met-Life stadium staff to the respectful behaviour of the participants.  Now read the following letter below, sent from the Wembley Arena in London. (click to enlarge):

What an incredible Kiddush Hashem! Besides the actual #siyumhashas event with over 6,000 participants which is amazing in itself. Kol hakavod to everyone involved. pic.twitter.com/MJEF91uLZj

In addition we have the beautiful sentiments expressed by one of the Met-Life stadium officials: 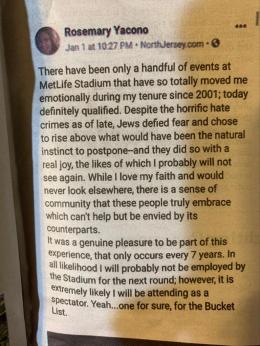 Kol hakavod once again to all those who took part in the hard work of studying the Talmud every day for seven and a half years, and who started the cycle all over again without stopping. And of course a huge yasher koach to everyone who took part in the celebrations and brought respect and honour to Am Yisrael and a Kiddush Hashem.

This week the family are celebrating the Barmitzvah of my niece’s son, so I would like to add a hearty Mazal Tov to Talya and Yuda, and their son Ariel. Wishing the whole family lots of nachas!

Shabbat Shalom to everyone, may you all keep warm and dry while the rain falls outside.