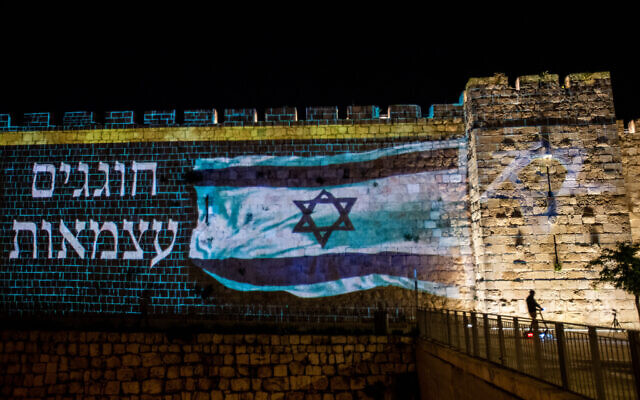 It’s Yom Ha’atzmaut, Israel’s Independence Day, and, as we note every year, the country swings in a mad but so-Israeli kind of way from the mourning, sorrow and remembrance of Yom Hazikaron to the flag-waving patriotism and general merry-making of Yom Ha’atzmaut.

Sadly this year the celebrations were much more subdued due to the constraints of the coronavirus pandemic, which involves self-isolation, social distancing and so much more. However, Israelis have never been known to let a bad situation get them down, and as we saw with Pesach and then Yom Hazikaron, we have found many inventive ways to celebrate.

Prayers marking the transition from the mourning of Yom Hazikaron to the celebrations of Yom Haatzmaut were held, not in synagogues, but on street corners, in car parks, on balconies and in parks throughout the country, with limits on numbers, masks were worn and 2 meters distance between worshippers. It’s amazing how one can manage when one needs! We went to the minyan at my brother’s car park (I brought a beach chair to make life more comfortable ☺). The prayers felt even more earnest than usual, because of the situation and because we are so grateful that we have finally been allowed to hold prayer services, even if only outdoors and in limited numbers.

As is traditional, the highlight of the service was the blast of a Shofar followed by a rousing rendition of “Next year in Jerusalem!”.

All around I could hear other minyanim, each carrying on at their own pace, some with musical accompaniments, some with professional-sounding chazanim (cantors) and it gave us such a wonderful feeling of unity and joy!

Local municipalities tried to add to the celebrations with music trucks, singers in town squares with residents looking on from their balconies, and fireworks.

The central Yom Ha’atzmaut ceremony took place at Har Herzl in Jerusalem with torch-lighting and music but with no audience.

Knesset Speaker Benny Gantz on Tuesday called for national unity to fight the coronavirus pandemic at the annual torch-lighting ceremony for Israel’s 72nd Independence Day, while warning the health crisis could yet worsen.

“From here, I’d like to spread hope. We are experiencing difficult times, and we must prepare for no less difficult times that still await us,” said Gantz. “We are facing an enemy that is testing our health and our humanity, and teaching us a national and social lesson on mutual responsibility. Every one of us is responsible for the lives of their brothers. Mutual responsibility and cooperation are our path to victory.”

He spoke at a prerecorded Independence Day event at Jerusalem’s Mount Herzl military cemetery, as the country watched from home amid a curfew to prevent gatherings.

“We are at the start of the 72nd Independence Day. We will continue to build a nation that is greater than the sum of its parts,” continued Gantz. “A model society that is not afraid of challenges, and looks ahead with hope. A society in which we, the leaders, take responsibility, work for you, the citizens of Israel, care for the unity of the nation and uphold democracy and human rights for all. A society that has some chutzpah and is out of the box, but is also stable and strong.”

A video message from Netanyahu was also featured at the torch-lighting ceremony. The event honoring 12 outstanding individuals for their contribution to the country was this year focused on saluting medical staff fighting the virus. Though traditionally helmed by the parliament speaker, last year Netanyahu successfully pushed to speak at the event.

“We’ve never had an Independence Day like this. We’re far apart physically, but we’ve never been closer,” said Netanyahu in the video address, praising medical staff and security forces who are enforcing the rules.

“A day will come when the hugs will return… but we’re not there yet, because the pandemic is still here,” he said.

Lighting the first torch, Gantz invoked his Holocaust survivor parents and career as an Israel Defense Forces chief of staff and dedicated the honor to the medical personnel combating the virus, security forces, the Knesset, the Israeli soldiers whose bodies are being held in Gaza and the two Israeli captives there, and all Israelis. 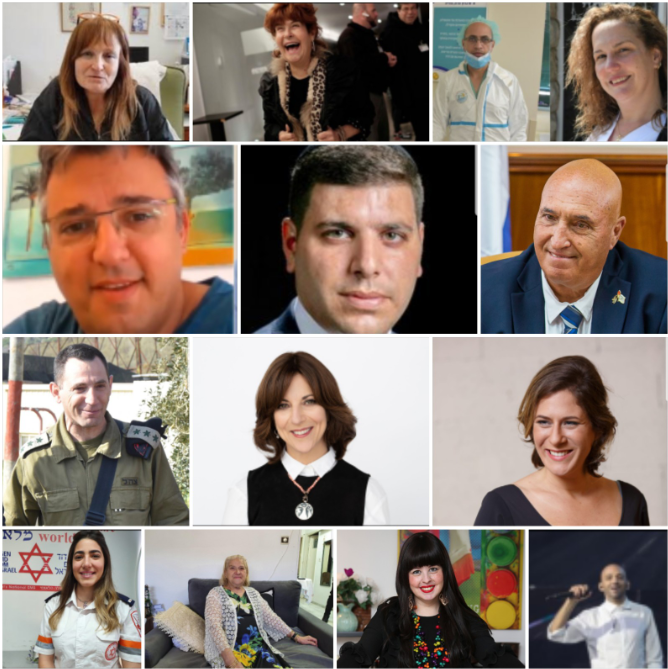 The torch lighters for Yom Haatzmaut 2020

Watch the singer Idan Raichelas choking up with emotion in his speech as he thanked the health workers, the security forces, and his family and supporters, before he lit up the torch:

Apart from the joy and the ceremonies, there is another very interesting aspect to this year’s Independence Day.

Not many people know that the San Remo declaration, which is essentially the founding document of Israel’s re-establishment, was signed exactly 100 years ago today, on the 5th Iyar 5680, 23rd April 1920. It is eerie how the date reappeared on the day independence was declared by David Ben Gurion on 5th Iyar 5708, 14th May 1948.

There is a fascinating monograph by Prof. Ephraim Karsh of the BESA Center of Bar Ilan University on “How the Jewish National Home entered International Law” which is worth a read. Here is just a small excerpt:

There is probably no more understated event in the history of the Arab-Israeli conflictthan the San Remo Conference of April 1920. Convened for a mere week as part of the post-WWI peace conferences that created a new international order on the basis of indigenous self-rule and national self-determination, the San Remo conference appointed Britain as mandatory for Palestine with the specific task of “putting into effect the declaration originally made on November 2, 1917, by the British Government [i.e., the Balfour Declaration], and adopted by the other Allied Powers, in favour of the establishment in Palestine of a national home for the Jewish people, it being clearly understood that nothing shall be done which may prejudice the civil and religious rights of existing non-Jewish communities in Palestine, or the rights and political status enjoyed by Jews in any other country.”1 This mandate was then ratified on July 24, 1922 by the Council of the League of Nations—the postwar world organization and the UN’s predecessor.

The importance of the Palestine mandate cannot be overstated. Though falling short of the proposed Zionist formula that “Palestine should be reconstituted as the national home of the Jewish people,” it signified an unqualified recognition by the official representative of the will of the international community of the Jews as a national group—rather than a purely religious community—and acknowledgement of “the historical connection of the Jewish people with Palestine” as “the grounds for reconstituting their national home in the country.”2

And this year is exactly the 100th aniversary of the San Remo conference which opened on 5th Iyar 1920. At which all the major powers who represented the 3 branches of Christianity Catholic, Protestant and Russian Orthodox agreed to award Eretz Yisrael from the sea to the Jordan to the Jews. Theologicslly this released us from the שבועה [oath to G-d] not to return to our homeland. Fascinating that this Divine milestone also happened on  [5th Iyar] ה” אייר

And now to conclude this post, here is a magnificent rendering of the prayer we say every Shabbat, asking G-d to bless the State of Israel.