It’s a strange Friday-Shabbat this week, from the sadness of Asara BeTevet to the happiness of Shabbat, and it’s a bit discombobulating (I love that word!) to add some good news to the mix.

It’s also a very short day as Shabbat begins so early in the middle of winter.

But there is excellent news – even as Israel heads into its third (and hopefully last) lockdown starting on Sunday, Israel rapidly rolls out its corona vaccination campaign. 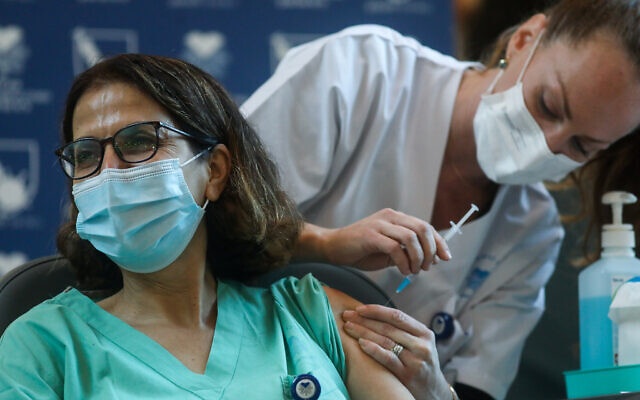 We began this week with the over-60s (including myself and most of my family) and health-care workers, and will hopefully soon begin vaccinating education system workers. Residents of old age homes and nursing homes will also be receiving the vaccine in the coming week. Israel is second (at the moment) in the world in the number of vaccines administered per 100 population.

In fact fears of low vaccine demand were turned on their head as vaccination centers and health fund call centers were overwhelmed by demand:

Israel was expected to end the fourth day of the vaccine campaign that began Sunday with more than 150,000 residents having been immunized. The number of vaccination centers and vaccines administered are doubling every few days. Health Minister Yuli Edelstein announced Wednesday that hospitals will operate vaccine centers beginning next week, further increasing immunization capacity.

By next week, some 200 immunization sites should be operating around the country. The HMOs have plans to operate mobile vaccination clinics that will travel to isolated communities and people unable to leave their homes.

The government announced they hope that Israel will achieve herd immunity by Pesach!

Israel’s vaccination drive is off to a flying start, getting shots to the population much faster than the United Kingdom, which was the first Western country to ask citizens to roll up their sleeves.

“The eve of Passover is almost three and a half months from now and I have no doubt that we will be able to celebrate the Seder with our families because of the vaccine,” said Jonathan Halevy, president of of Jerusalem’s Shaare Zedek Medical Center, in a press briefing this week.

“Before mid-April a critical mass of the Israeli population will be vaccinated, which will lead to herd immunity,” he predicted.

Last Passover was spend under strict lockdown and people were banned from celebrating with families, in what many Israelis considered a psychological low point of the pandemic.

After Britain and Israel comes the United States, which started vaccinating on Monday and has injected 0.19% of the population.

I hope they are not being over-optimistic, but certainly by the spring or early summer we can hope that the worst of the pandemic will be behind us.

This is wonderful news to take us into Shabbat. On that note I wish you all Shabbat Shalom!  💐

This entry was posted in Slice of Israeli life, Technology and tagged coronavirus, Good News Friday, vaccine. Bookmark the permalink.