Purim has started (or is starting) around the Jewish world, and we are celebrating a “triple Purim” which is quite a rare event. It started tonight at sundown and lasts till tomorrow night when Shabbat begins. But in walled cities like Jerusalem, Purim falls a day later which means that this year it falls on Shabbat. However the Megillah cannot be read on Shabbat, nor can mishloach manot be given. So the Megillah is read on Friday along with the rest of the country, on Shabbat “al hanisim” is added in the prayers (in Jerusalem), and mishloach manot are distributed and the festive meal is eaten on Sunday! Lucky Jerusalemites, spreading the festivities over 3 days whereas we “ordinary” Jews have to cram it all into one day! (Thanks to Elchanan for the edit).

This Purim marks a special anniversary worldwide. It has been a very strange and extremely difficult year, the year of the pandemic, which began exactly a year ago, with the parties and celebrations of last Purim. Of course in hindsight the government, all governments, should have locked down before then, but the pandemic was too new, too much of an unknown, to be fully understood.

But in the depths of the pandemic who could have dreamed that we would now be emerging “from darkness to light”, and that our mourning would be turned into celebrations, as it says in the Megillah, even if only a much more minor scale than in previous years.

So let us celebrate the good news for once. Israel is leading the world in the percentage of its population being vaccinated against the coronavirus, and the excellent news emerging from the Israeli vaccination campaign is that after two doses the Pfizer vaccine is 95% effective against the virus:

Maccabi Healthcare Services, which covers over a quarter of all Israelis, said in a statement that only 608 people had tested positive for COVID-19 more than a week after receiving the second of two required Pfizer doses.

The comparison was against a group of 528,000 Israelis with similar backgrounds who did not receive the vaccine, Maccabi said. Of those, 20,621 tested positive.

“By comparing the proportion of new cases between the vaccinated and yet-to-be vaccinated groups, efficacy of the vaccine in Israel is currently estimated at 95%, seven or more days after receiving the second dose,” Maccabi said.

Most of the 608 infected vaccinees reported only mild symptoms, such as a headache or cough, Maccabi said. Some 21 required hospitalization, seven of whom had severe symptoms, it added.

Nearly 44% of Israel’s 9.1 million citizens have received at least one shot of the Pfizer vaccine, making the country the largest real-world study of its efficacy.

On Wednesday, Clalit, Israel’s largest healthcare provider, reported a 94% drop in symptomatic COVID-19 cases among 600,000 people who had received both Pfizer doses.

This is such good news that it hardly needs repeating. Of course there are still many unknowns, but for now, life is gradually opening up in Israel, still on a restricted scale, but far better than we could have hoped for a year ago. Let us pray that this is the beginning of the end of the pandemic.

In an effort to encourage more people to get vaccinated, in an only-in-Israel moment, the city of Bnei Brak, an ultra-Orthodox city near Tel Aviv, offered free cholent and challah  (yes, it did sound like a Purim joke! ☺) to whoever arrived to get vaccinated. Other cities offered other yummy treats including hummus and pizza to entice the population:

A person receives a pizza after receiving the vaccine, at Clalit Health Services in the Israeli city of Bnei Brak,  on Feb. 15, 2021. Photo by JACK GUEZ/AFP via Getty Images.

The jokes came fast and furious. “There’s already an anti-cholent group organizing, the ‘kugelers,’” one observer quipped. “They should be careful. Cholent can have dangerous side effects,” joked another.

But the lampooning didn’t stop the program, which was an unmitigated success from the start. At least 2,000 residents who hadn’t vaccinated — many who hadn’t even looked into setting appointments to do so — showed up to the vaccination center last Thursday for the city’s free bags of cholent, dished out with bread rolls and soda.

In Bnei Brak, which was the first to experiment with freebies, one person joked that it wasn’t a vaccination drive with cholent given out, but a cholent drive with a vaccination giveaway, and the quip holds some truth

A whole social scene has evolved around the Thursday night cholent tradition. By offering cholent on Thursday night at the vaccination center, the city was attempting to tap into that scene and get young people to come for both some beans and a shot.

In Petah Tikva, where skepticism about the vaccine is concentrated among aging immigrant populations, especially Russian speakers, the municipality on Monday began handing out blintzes, the traditional cheese-filled cigar-shaped wraps; and pirozhki, the stuffed, fried pies sold by street vendors throughout Russia and Ukraine that Wikipedia calls “a stereotypical part of Russian culture.” The most familiar and comfortable of comfort food.

The city also hired a musician to play folk tunes to go along with the nosh and bring in passersby. [I must have missed all this since I was one of the first to be vaccinated. I think I shall start a protest. I want my blintzes NOW!. 😛  -anneinpt]. 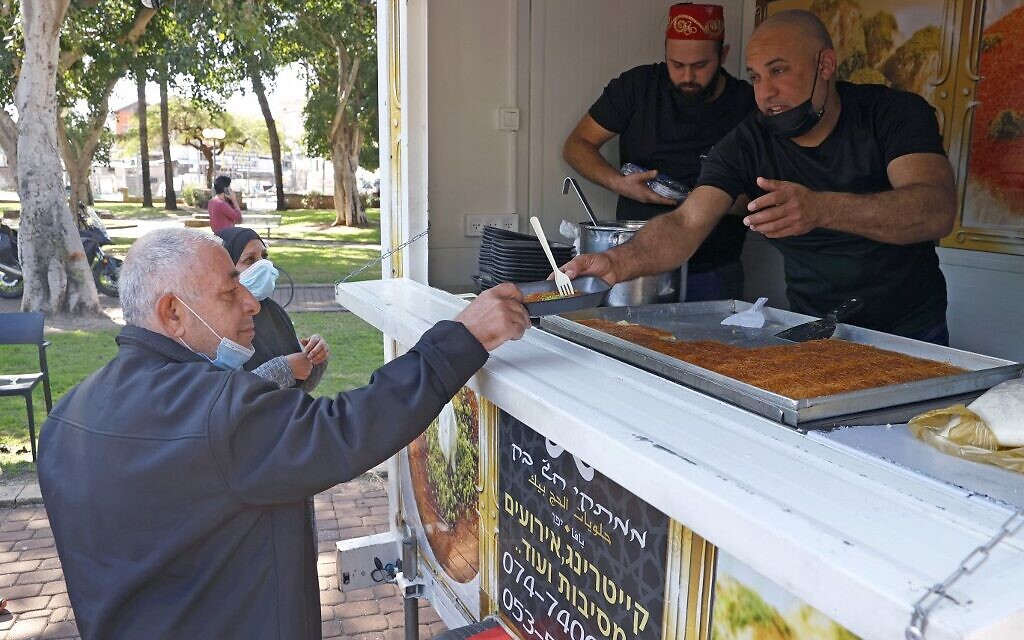 A man receives a slice of Knafe after receiving the Covid vaccine in Tel Aviv, on February 16, 2021. (JACK GUEZ / AFP)

Tel Aviv has offered free hummus and knafe in Jaffa, which has a large Arab population, and free espresso in northern areas of the city, where people flock to cafes like moths to a light.

Many places not necessarily targeting specific groups have offered free pizza, which is easy, cheap and almost universally loved. Who wouldn’t get a shot for a free pizza?

I love the way this country works! 😀

And now to some other good news, almost buried by the news of the vaccinations has been the extraordinary outbreak of peace between Israel and the Gulf states. I admit I was slightly sceptical about this newfound love of our Arab neighbours, and thought it might only be “cupboard love” for the State of Israel, and not for the Jewish people. However I have happily been proven wrong, as we read that the Jewish communities of six Gulf states have combined forces to form a Beth Din of Arabia! (A Beth Din is a Rabbinical court). It sounds almost mashiach-zeit – the days of the Messiah, it is such an unlikely phrase.

As Jewish life has become more public in Bahrain and the United Arab Emirates, Jews from across the Gulf countries are forming the Association of Gulf Jewish Communities. The new organization, the first of its kind, will include Jews and Jewish communities from the UAE, Bahrain, Oman, Qatar, Kuwait and Saudi Arabia, it said Sunday in a statement.

“During the pandemic, many of us started attending the Jewish Council of the Emirates’ pre-Shabbat Zooms, where we met each other,” said Houda Nonoo, the first female Bahraini ambassador to the United States (2008-2013) and the first Jewish ambassador from an Arab country. “That ultimately became the genesis for the creation of the Association of Gulf Jewish Communities, because as we got to know one another on the call, we realized that there were certain resources we could share.”

“While each community is independent, they share a common goal and vision: for Jewish life in the GCC to flourish for the benefit of both residents and visitors,” it said in the statement. “Under the spiritual leadership of Rabbi Dr. Elie Abadie, based in Dubai, and President Ebrahim Dawood Nonoo, based in Bahrain, the group is partnering on different communal programs and services so that their resources will enhance each other. The association’s board consists of members from all six Gulf countries, who together will forge the path forward for growing Jewish life in the Gulf.”

The group will include a Beth Din of Arabia (Jewish Court), which is in the process of being established to assist with issues pertaining to personal status, inheritance and the voluntary resolution of business disputes. There will also be an Arabian kosher certification agency.

If anything represents “venahafoch hu” – and it was turned upside down as it says in the Megillah, it is this news from the Gulf. How refreshing it is to learn how many people want to throw off the prejudices of the past and open up a new era.

My last item is directly connected to Purim: A mid-15th century Megillat Esther, the scroll of Esther that we read on Purim, originating in Iberia, has been gifted to the National Library of Israel in Jerusalem:

A mid-15th century Sephardic Esther scroll which was gifted to the National Library of Israel
(photo credit: NATIONAL LIBRARY OF ISRAEL)

The Iberian Esther scroll is one of the oldest surviving renditions of the biblical tale of Esther taking up her noble destiny to save the Jewish people from the evil Haman.

Experts determined that the mid-15th century scroll was written by a Jewish record-keeper around 1465, prior to the expulsion of Jewish populations from Spain and Portugal at the end of the century.

It was the only complete 15th century megillah currently being held in private hands prior to the donation. There are only a few of these complete megillahs worldwide, and those from the pre-expulsion period in Spain and Portugal are “even rarer, with only a small handful known to exist,” the National Library said.

Curator at the National Library Dr. Yoel Finkelman said that the gifted scroll was “an incredibly rare testament to the rich material culture of the Jews of the Iberian Peninsula.

“It is one of the earliest extant Esther Scrolls, and one of the few 15th century megillot in the world,” Finkelman added. “The library is privileged to house this treasure and to preserve the legacy of pre-expulsion Iberian Jewry for the Jewish people and the world.”

The Esther scrolls detail the miraculous events that took place in Persia 2,300 years ago when the Jewish people were saved by the actions of Mordechai and Esther from Haman and King Ahasuerus’ decree to exterminate the Jewish population.

What a wonderful treasure to be gifted to the Jewish nation! Kol hakavod to the Jesselson family on their generosity.

I wish you all Happy Purim, Purim Same’ach! May this Purim mark the beginning of our turnaround back to normal life.

Shabbat Shalom to you all as well.