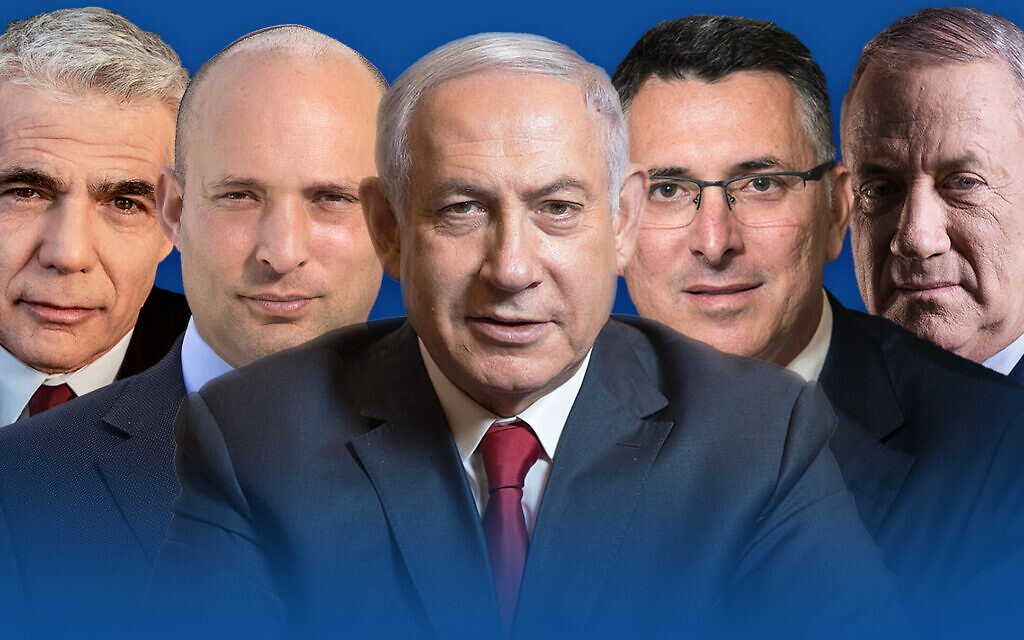 Here we go again – the fourth round of elections in two years. I feel a bit despairing and bit apathetic, and not particularly full of hope that anything major is going to change. But I shall not cede my right to vote and try to influence the leadership of this crazy country.

Like the last round of elections, last March, this year’s election is being held as a “socially distanced democracy“, however surreal that may sound:

Preparing for a national election in a pandemic, Israel is making unusual changes to its normal routine for Tuesday’s vote, including placing ballot boxes in virus wards.

“It’s the first time we have needed to make arrangements for voting in quarantined wards and for an election in a pandemic, but we are meeting the challenge,” David Ratner, spokesman at Rambam Medical Center in Haifa, told The Times of Israel.

There are 38 polling stations in COVID-19 wards. In some institutions, the station will circulate among virus wards. Hadar Elboim of Jerusalem’s Hadassah Medical Center said, “We have three coronavirus wards at the moment, and a mobile polling station will move between them, to give all patients a chance to vote.” 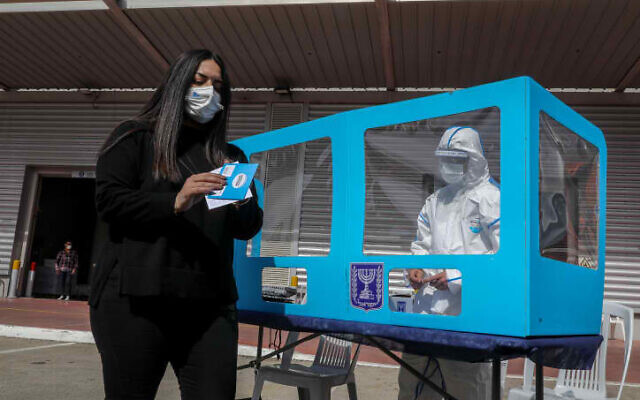 A worker of the Central Election Committee wearing protective gear during a demonstration of special polling station ahead of the upcoming elections, at the central elections committee warehouse in Modi’in, on February 23, 2021. (Flash90)

She said that today the logistics are manageable, but earlier in the pandemic, when there was less experience with PPE, it would have been challenging. “At the start of the pandemic, working with this protective equipment was very hard and time-consuming, and running polling in virus wards would have been hard,” she said. “But today, dealing with protective gear is quick and easy.”

As well as catering to hospitalized patients, election authorities needed to make provision for citizens who are sick with COVID-19 at home or quarantined because of contact with a carrier.

As for the elections and politics themselves, many Israelis are fed up with the endless rounds of voting over the past couple of years:

Facing an electorate worn down by a series of campaigns and the coronavirus pandemic, candidates made their final push in recent days with a series of TV interviews and public appearances at shopping malls and outdoor marketplaces. The campaigns increasingly reached into people’s personal space with a constant barrage of get-out-and-vote texts that made cell phones ding and buzz at all hours. 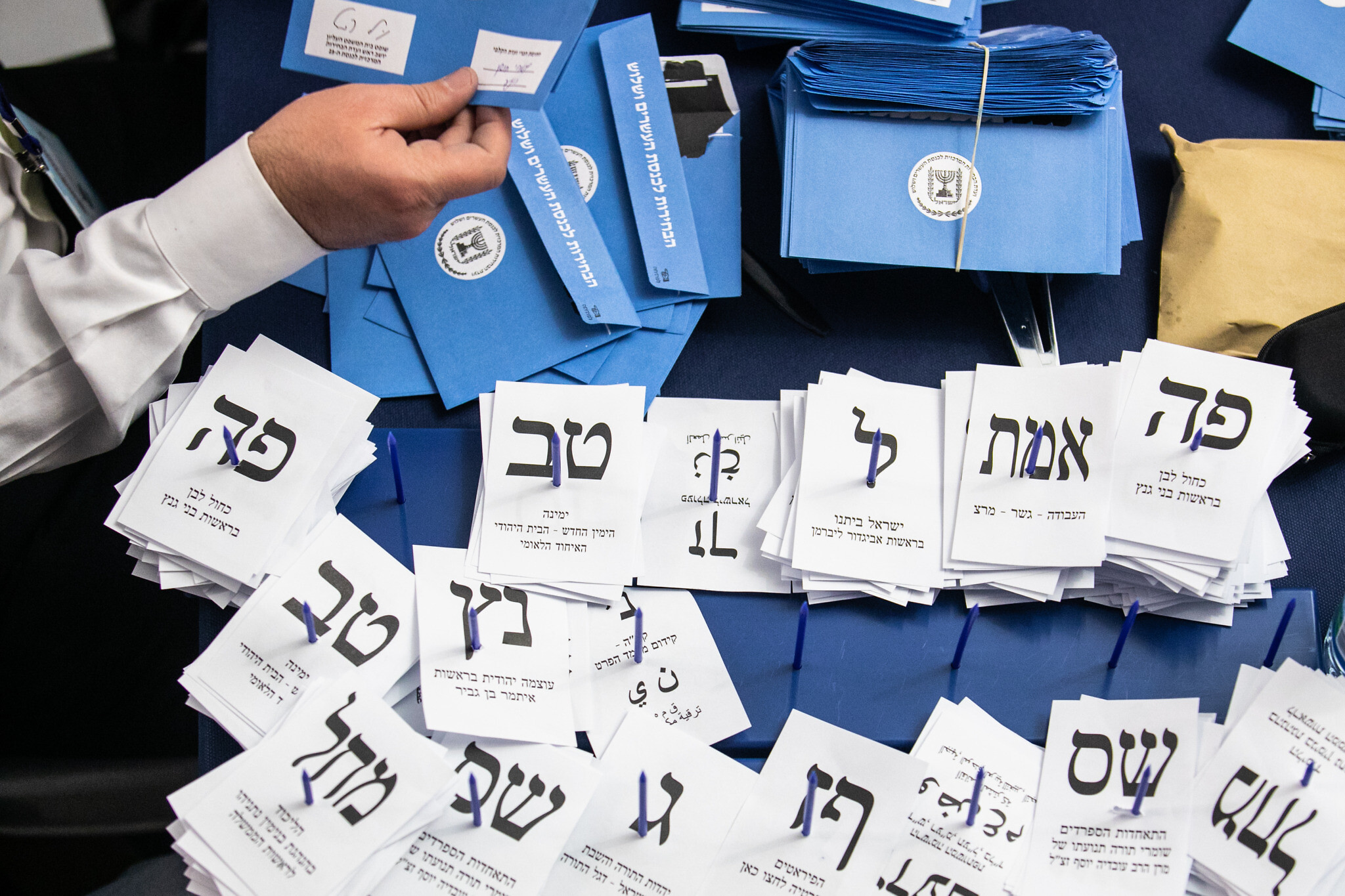 Voting slips and envelopes for the Israeli elections

Netanyahu has portrayed himself as a global statesman uniquely qualified to lead the country through its many security and diplomatic challenges. He has made Israel’s successful coronavirus-vaccination campaign the centerpiece of his reelection bid, and pointed to last year’s diplomatic agreements with four Arab states.

Opponents accuse Netanyahu of bungling the management of the coronavirus pandemic for most of the past year. They say he failed to enforce lockdown restrictions on his ultra-Orthodox political allies, allowing the virus to spread, and point to the still-dire state of the economy and its double-digit unemployment rate. They also say Netanyahu is unfit to rule at a time when he is on trial for multiple corruption charges, a case he dismisses as a witch hunt.

Israelis vote for parties, not individual candidates. No single party list of candidates has been able to form a governing majority in Israel’s 72-year history.

Netanyahu’s Likud party and those led by his rivals will be looking to smaller, allied parties as potential coalition partners. The party that can cobble together a majority coalition gets to form the next government — a process that is expected to take weeks.

Here is a good summary of the personalities and parties involved:

Tuesday’s election was triggered by the disintegration of an emergency government formed last May between Netanyahu and his chief rival to manage the coronavirus pandemic. The alliance was plagued by infighting, and elections were triggered by the government’s failure in December to agree on a budget.

Netanyahu is hoping to form a government with his traditional religious and hard-line nationalist allies. These include a pair of ultra-Orthodox parties and a small religious party that includes openly racist and homophobic candidates.

Netanyahu’s rivals have accused him of causing the past two years of paralysis in hopes of forming a more favorable government that would grant him immunity or protect him from prosecution.

His challengers include Yair Lapid, Israel’s opposition leader whose Yesh Atid party has emerged as the main centrist alternative to Netanyahu.

Netanyahu also faces challenges from a number of onetime allies who have formed their own parties after bitter break-ups with the prime minister.

They include former protege Gideon Saar, who broke away from Likud to form “New Hope.” He says the party is a nationalist alternative unburdened by corruption charges and what he says is a cult of personality that keeps Likud in power.

Yamina party leader Naftali Bennett, another former Netanyahu aide, could emerge as the kingmaker. A hard-line nationalist politician who was formerly Netanyahu’s education and defense minister, Bennett has not ruled out joining a coalition with the embattled prime minister, allowing him to court both sides in future coalition talks.

The personality politics have so overtaken the race that there’s been almost no mention of the Palestinians, after years of frozen peace talks.

If you want to understand how Israel’s convoluted electoral system works, read this article from the Times of Israel: The painfully complicated act of voting in an Israeli election.

For an overview of the candidates, watch this video

If you missed 'Four Elections in Two Years | An expert analysis of the Israeli election' w/ @Jerusalem_Post 's @LahavHarkov & @haaretzcom 's @ChemiShalev, moderated by @dmweinberg, it's your lucky day. Catch the #briefing at https://t.co/FF1atk29X4 #Israel

A shorter version of the issues at the center of the elections, via the Times of Israel, can be listened at this link.

May the best man or woman win! And may Hashem guide the hand of all the voters and our leaders. Maybe it is symbolic that today is 10th Nissan, the day that the Children of Israel crossed the Jordan into Israel. Maybe today’s vote will represent a modern day version of “crossing the Jordan”, and bring us to stability and peace for at least 4 years if not 40 years!

1 Response to Israeli Elections – round 4