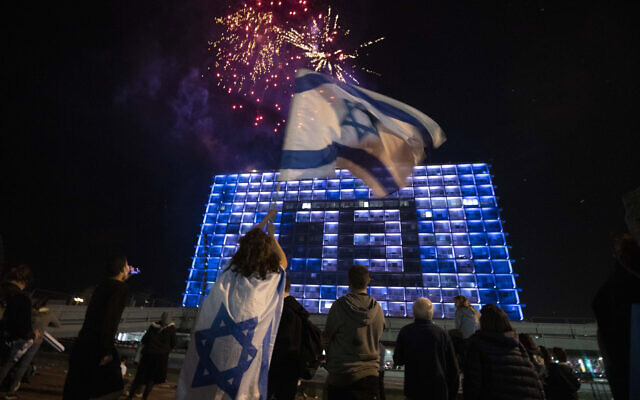 Last night we attended the prayers in Petach Tikva’s historic Central Synagogue. It has been closed for a couple of years for renovations, which continued throughout last year’s lockdown, and the result is outstanding! The historic charm and authenticity have been preserved while improving safety, acoustics and comfort. 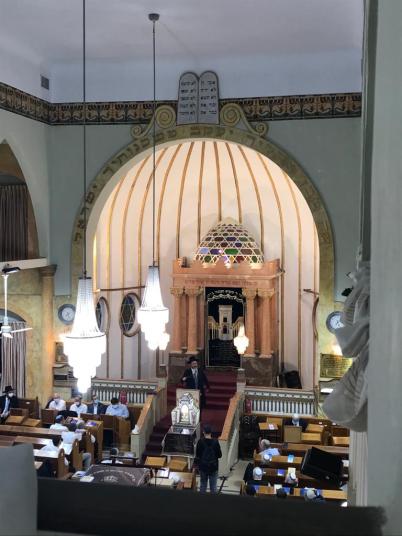 The prayers themselves were as uplifting and inspiring as ever, with the chazan accompanied by guitar, darbouka and trumpets.

The central Yom Ha’atzmaut ceremony took place at Har Herzl in Jerusalem with torch-lighting, parades, music and more. Besides the fantastic flag-bearers forming clever formations, the highlight was the 12 torchbearers:

Torch-lighters at the main event included doctors and nurses representing medical teams who have been at the frontlines of battling the coronavirus pandemic; Rabbi Eitan Schnerb, whose daughter Rina was murdered in a 2019 terror attack in the West Bank and who founded a non-profit aiding the needy in the city of Lod; Shira Isakov, who survived a murder attempt by her husband and has become a vocal advocate against violence toward women, alongside the neighbor who helped save her life; Abie Moses, head of an organization that helps victims of terror attacks; Major Maor Cohen, who volunteers with children with cancer; Zipi Harpenes, a school principal in Beersheba; Gabriela Sztrigler Lew, who volunteers in the Shalom Corps doing community work around the world;

Not mentioned here are the 102-year old Yemenite teacher who spoke and lit the torch like a man 50 years younger! And the very moving story of two Arab-Israeli nurses whose actions touched the nation during the corona pandemic: 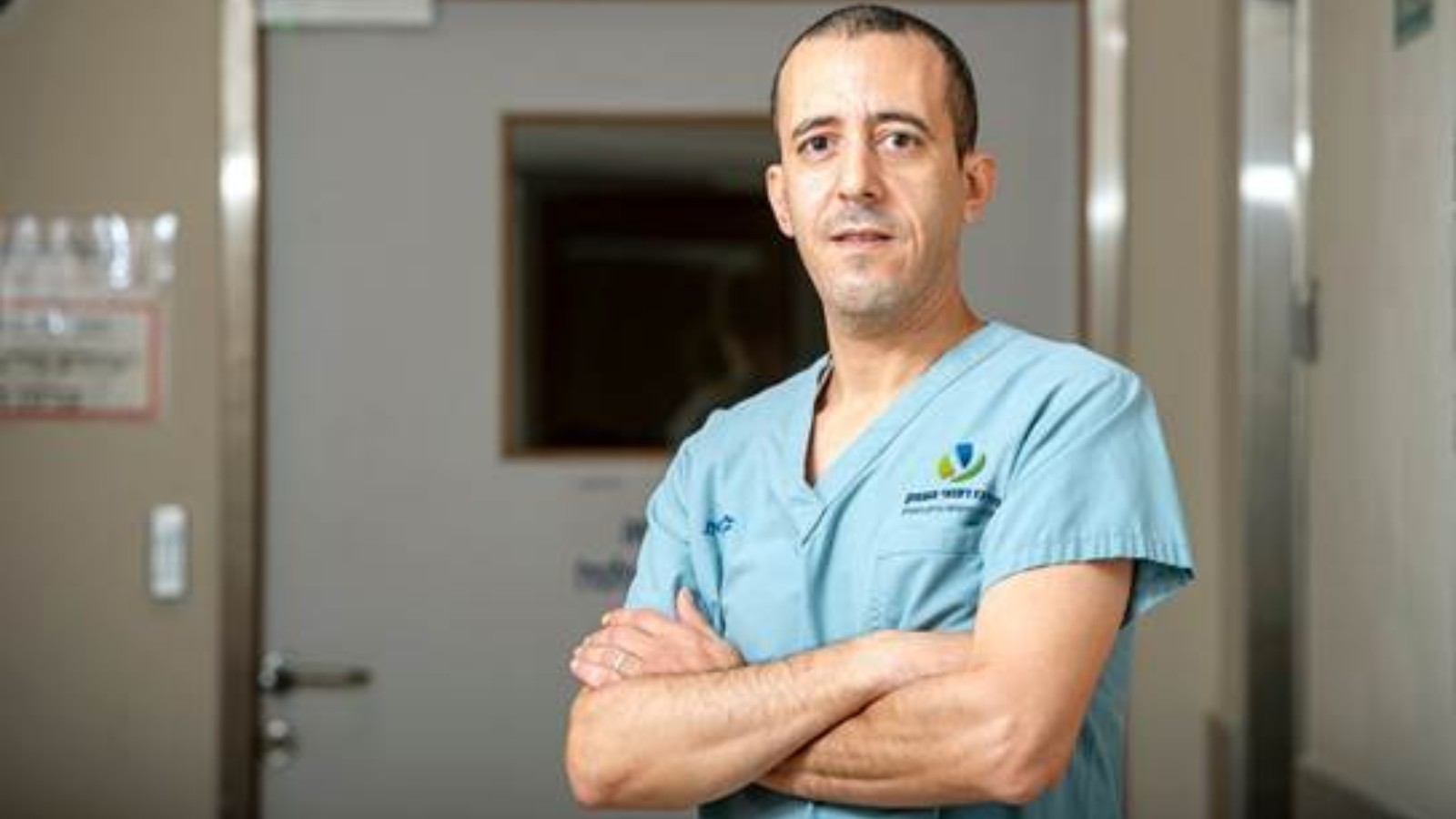 Ibrahim was on duty recently when a religious elderly Jewish patient was nearing his end.

“The patient’s family would not make it in time for the inevitable farewell. Maher, trained in Jewish studies, applied his knowledge and deeply empathic spirit at that critical moment,” Rich tells ISRAEL21c.

“In a phone call with the man’s family, Maher the Muslim nurse recited aloud in Hebrew the Shema Yisrael prayer –‘Hear O Israel, the Lord our God, the Lord is One.’

“His act of loving empathy, kindness and understanding went far beyond the norms of nursing and in that brilliant timeless moment, he personified the spirit of Emek and Israel,” Rich says.

Giat, who was born in Yemen, is a “mori” (a religious teacher and spiritual mentor) and Torah scholar, as well as the owner of a spice shop in Ashkelon where he dispenses natural medicines. 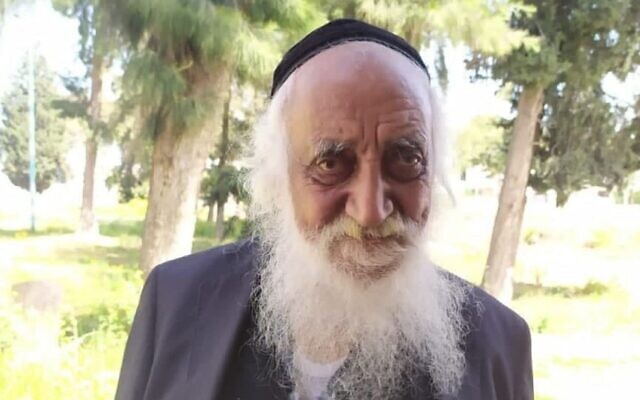 Giat’s medicinal expertise is acquired from ancient methods, passed along through the generations. He bases his remedies off the practices of Maimonides, the influential medieval Sephardic Jewish philosopher and physician.

The 102-year-old serves as a guide to those who turn to him for advice, expertise and blessings. He continued to work during the pandemic, inviting people into his home, where he provided spiritual assistance to many in accordance with the unique tradition of Yemenite Jews.

Giat also volunteers as a Torah scribe and many of his Torah scrolls have been donated to synagogues across the country.

Giat explained his “secret” to living a long life. “First of all, it comes from the blessed Holy One,” he told Ynet.

“Giat, a representative of the older generation, a native of Yemen, symbolizes the pioneering, influential and overflowing aliyah of all Yemenite Jewry to Israel,” they said.

“His material and human spices, the materials from which true love is made, along with his volunteer work as Jewish scribe, express the Israeli spirit, in all its virtues,” they said.

You can watch the entire show here:

In an incredible turn of history, Israel – which is used to being vilified and shunned by the rest of the world – was honoured by several world landmarks being lit up in blue and white in honour of Yom Ha’atzmaut:

Buildings and landmarks across the US and the globe lit up in blue and white Tuesday evening in celebration of Israel’s 73rd Independence Day. 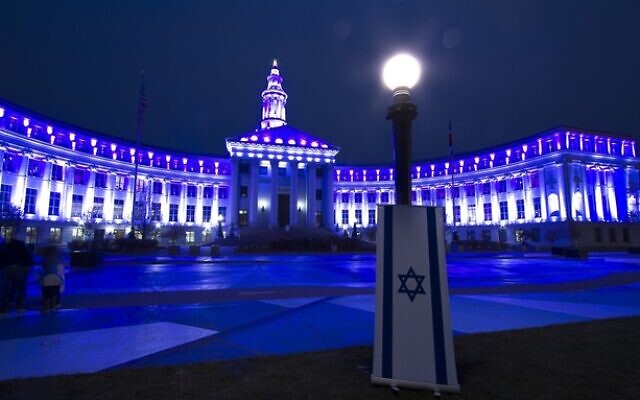 Denver’s city call lights up in blue and white in honor of Israel’s Independence Day on April 14, 2021. (Israeli-American Council)

The initiative, which in the US was spearheaded by the Israeli-American Council, saw New York’s Cuomo Bridge along with city halls in Austin, Beverly Hills, Boston, Denver, Hollywood, Houston, Las Vegas, Los Angeles and San Francisco light up in the colors of Israel’s flag.

Tonight, we will light in BLUE and WHITE to commemorate Israel Independence Day.

Outside the US, Ukraine joined in on the festivities, lighting up its city hall in Kyiv in blue and white. In Zagreb, Croatia, an Israeli flag was being projected on a fountain in the city center. In Uzbekistan, the Israeli flag was being projected on a hotel overlooking the central Amira Temura Square in the country’s capital of Tashkent. Similar gestures were seen in Vancouver, Winnipeg, Ottawa, San Paulo and Vilnius.

My favourite Israeli commentator Sivan Rahav Meir had beautiful inspiring words as she wrote about the 12 torchlighters:

No political argument can ruin this special mix. Anyone looking for an explanation will have to go back one day, to the speech given by the Chief of Staff, who opened his words with our Matriarch Rachel, reminding us that we are part of a large and eternal plan, and quoted what was said to Rachel: “And the children shall return to their borders”. This is what it looks like when they start returning.

To celebrate this year’s Independence Day, a beautiful song, “Listen to me my brother” was performed by veteran Israeli singer Yehoram Gaon and Yishai Levi:

The words are so fitting as the theme of this year’s Yom Ha’atzmaut is brotherhood. May we merit to see many more years of love and brotherhood in this crazy, wonderful little country of ours, till 120 and beyond!