I haven’t written one of these Good News Friday posts for a very long time, but today suddenly the muse has overtaken me. I have just a couple of items but they brought a smile to my face and I hope they will do the same for you too.

First we finally have some good news on the corona front: serious covid cases have dropped to the lowest level in 2 months:

The number of patients hospitalized in serious condition due to the coronavirus dropped to 460 on Friday, the lowest recorded number in nearly two months.

Of those patients, 349 were unvaccinated, 68 received only two of the three vaccine doses, and 29 patients had received all three shots.

Researchers at the Weizmann Institute of Science said earlier this week that the total number of serious coronavirus cases could fall to as low as 250 by the end of the month.

There were 2,064 new COVID cases confirmed on Thursday, with active infections standing at 31,868 on Friday morning.

Of the over 100,000 samples tested on Thursday, 2.14 percent came back positive, also the lowest recorded rate in over two months.

Israel — the first country to officially offer a third dose — began its COVID-19 booster campaign on August 1, initially rolling it out to those over the age of 60. It then gradually dropped the eligibility age, eventually expanding it to everyone aged 12 and up who received the second shot at least five months ago.

Israel is also beginning to relax its quarantine rules for primary school children:

As cases fall, the Health Ministry and Prime Minister’s Office said Thursday that beginning next week, students in towns with low COVID-19 case rates will be able to avoid the quarantine mandated for those who come in contact with a coronavirus carrier.

This is all very good news – so if you haven’t already, go and get vaccinated! Protect those children and adults who can’t be vaccinated.

And now for something completely different. Last year Israel and the Gulf States signed the Abraham Accords (which I admit I was doubtful about at first) heralding a period of goodwill and normalization between Israel and the Arabs – something that Israel’s founders – and even ourselves only a couple of years ago – could only have dreamed of.  And both sides are now enjoying the fruits of what we all hope will continue to develop into a good friendship.

Last week Israeli Foreign Minister Yair Lapid visited Bahrain on a first Israeli ministerial visit since the accords were signed, and inaugurated Israel’s embassy in Manama, and the two sides also several agreements on water, sports and the environment: 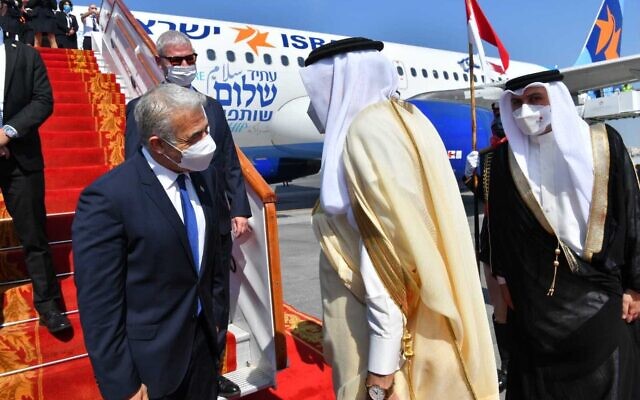 He is set to open Israel’s embassy in Manama later in the day, and to sign agreements on water, environment and sports.

Lapid was received on the tarmac by Bahrain’s Foreign Minister Abdullatif al-Zayani.

He is set to open Israel’s embassy in Manama later in the day, and to sign agreements on water, environment and sports.

Lapid was received on the tarmac by Bahrain’s Foreign Minister Abdullatif al-Zayani.

Earlier this month, longtime diplomat Eitan Na’eh was tapped to serve as Israel’s ambassador to Manama. The nomination of Na’eh — who is still serving as an envoy to the United Arab Emirates pending his confirmation — came on the same day that Bahraini Ambassador to Israel Khaled Yousef al-Jalahmah met Lapid in the Knesset and presented the foreign minister with his credentials.

Two weeks later, Jalahma officially presented his credentials to President Isaac Herzog, a day before the one-year anniversary of the signing of the Abraham Accords.

Jalahma said it was “a great honor” to be Bahrain’s first ambassador to Israel, adding that he was “confident that this historic step will lay a solid foundation for relations between our two countries, based on the values of tolerance and coexistence between peoples, beliefs, and religions.”

Since becoming foreign minister in June, Lapid has also visited the United Arab Emirates and Morocco, two countries that Israel has normalized relations with over the past year.

These visits and accords are no mere political conveniences. The Muslim citizenship seem very interested in learning about Jewish life, as the Jewish High Holy Days were celebrated in the Gulf countries:

Ebrahim D. Nonoo, leader of Bahrain’s Jewish community and president of the newly founded Association of Gulf Jewish communities (AGJC), whose goal is to develop Jewish life in the region, told JNS that “the best thing about Rosh Hashanah this year is that we are able now to advertise it. We are saying ‘Happy New Year’ to our Bahraini friends and government officials. It’s beautifully really out in the open now.”

He added “for us, in Bahrain, it’s about reciting the prayers, which we will be doing at home. But at the same time, we are sending packages of honey, pomegranates and other traditional Rosh Hashanah items to [Muslim] Bahraini families so they can join us in experiencing Rosh Hashanah.”

The largest Rosh Hashanah event in the region is slated to take place in Dubai, the UAE city that boasts the largest Jewish community, with an estimated 500 practicing Jews.

‘This is going to be an amazing experience’

Alex Peterfreund, a co-founder of Dubai’s Jewish community, its cantor and an AGJC board member who arrived in the country from Antwerp, Belgium, in 2014, told JNS that the community will be hosting services and kosher meals for several hundred guests in a local hotel under the leadership of Rabbi Dr. Elie Abadie, the Jewish Council of the Emirates’ (JCE) senior and resident rabbi.

Similar to comments made by Nonoo, Peterfreund said “the biggest difference between this Rosh Hashanah and in previous years is that we were a group of Jews coming together in a discreet way, and now it’s much more open and people feel more comfortable.”

He added that “in the past, some people were insecure and hesitant, and that is much less the case this year.”

Peterfreund said another big difference is that this year, local Muslims from Dubai would be joining the group to take part in the festivities.

Happily, and in stark contrast to the cold peace with Egypt, relations between Israel and the Gulf are mutually friendly, and a delegation from Bahrain is presently in Israel: 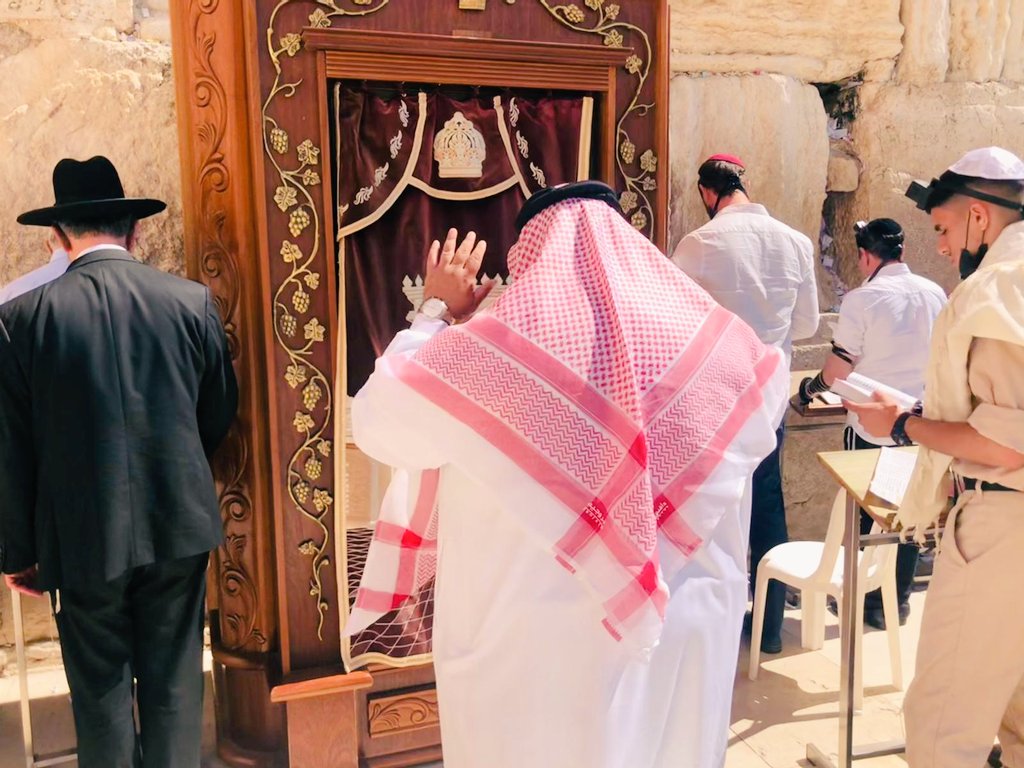 Adil Hirabi from Bahrain prays at the Kotel

Just this week, Aldhirabi, whose Twitter bio says is an expert member of the Union of Arab Trainers and a certified trainer of the Council of Arab Economic Unity of the League of Arab States, and a member of the Sharaka organization  which connects the people of the Gulf and Israel for a brighter future, posted this beautiful tweet:

Peace through food! What a joy it is to sit down for dinner in #Israel, with our dear friends from #Bahrain, who are here with the @sharakango delegation! Even more special that @lightstonea, who played such instrumental role in #AbrahamAccords, could join! pic.twitter.com/tNGcXAyBKy

If we didn’t see these pictures with our own eyes, could we ever have believed it? Mashiachzeit indeed!

And regarding the cold peace with Egypt, perhaps they are “catching the peace” from the Gulf, because the first official EgyptAir flight between Cairo and Tel Aviv  landed at Ben Gurion Airport this week:

There are now due to be four nonstop commercial flights a week between Ben Gurion International Airport and Cairo.

Until now, the only flights between Israel and Cairo were operated by Air Sinai, a subsidiary of EgyptAir, which operated the flights in unmarked planes without the Egyptian flag. 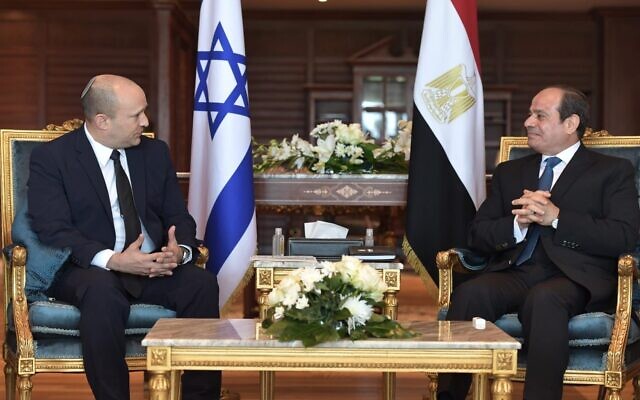 Prime Minister Naftali Bennett met with Egyptian President Abdel Fattah el-Sissi in Sharm el-Sheikh two weeks ago, marking the first public visit to Egypt by a serving Israeli leader in more than a decade. Following his visit, Bennett said he’d held “an important and very good meeting” with the Egyptian leader, in which the two “laid the foundation for deep ties moving forward.”

An Israeli flag was perched behind Bennett as he sat across from Sissi for a photo opportunity; the flag appeared in full when it ran in Al-Ahram, the Egyptian regime’s most well-known mouthpiece.

The news barely made a ripple in Israel or in the international media, but in fact this is extremely important and hopefully signifies a thawing of relations between the two countries.

And to cap it all off, yesterday was the 44th anniversary of my Aliya to Israel! Best decision of my life!

Wishing you all Chodesh Tov and Shabbat shalom.