Posted on 9 November 2021 by anneinpt 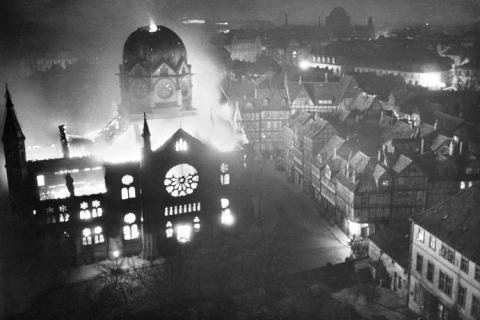 It is the 83rd anniversary of Kristallnacht tonight, the massive pogrom against the Jews organized by the Nazi regime in Germany in 1938, signalling the beginning of the Shoah, the planned genocide of the Jews. There had in fact been many anti-Jewish laws enacted over the years since Hitler came to power in 1933, but Kristallnacht marked a new level of violence.

As always I would refer you to my Family History pages, and in particular the account written by my father Oskar Prager of his experiences as a 9 year old boy in Fuerth, Germany, on Kristallnacht. I quote his story here:

I was 9 years old a the time but remember everything as if it were today.

At about 2 in the morning having been asleep, I was woken up very
roughly and rudely by a man in brown uniform which I recognised his being a man of the S.A. (Stormtrooper). He and his mates broke into our apartment, broke down the door and got everyone up, shouting get up and dressed and out in the road. I was the eldest of 4 children, the youngest were twin girls of 2 years.

Well with all the shouting and screaming, we all got dressed and in the street were marched to a plaza in the middle of the town. It was freezing cold, foggy, and the sky was red and the air smelled of something burning. When I wanted to ask questions they yelled at me to keep quiet and walk. The streets were covered in glass shards and every now and again I saw bits of furniture, books, etc. lying in the road. Having arrived in that plaza we had to stand in rows, nobody was allowed to say and even whisper anything to anyone, and finally about 6 or so in the morning, having stood there for at least 3 hours, we were all marched to a sports hall.

There must have been about 1000 people or even more, of all ages from babies in prams to old people with canes. Having arrived in this sports hall, again we had to stand and men were separated from their wives and families. About 7 or so in the morning, one of these brown-shirts came to my mother and told her to go home with us but not to talk to anyone in the street. It was just about getting light.

When we got home we found the apartment in relative good order. The front door was of course broken. However, my father was not with us, and I asked my mother what happened to him and she said she had no idea. Obviously, there was no question of going to school. We actually had an apartment above the school building since my father was the director of the school.

At some time later in the day, he appeared at home and I could not recognise him at first as his beard had been shaved off. He said that the Gestapo told him to go home since he was the director of the school, and re-open the school as soon as possible as the law of the land demanded that children go to school. However, I do want to add that there were some men of the community I never saw again. Most of the men were sent to a concentration camp, Buchenwald or Dachau and possibly others. Some came back after some weeks but only for a short time. Most were released if they had possibility of emigrating from Germany and to get a release from a camp, they had to show that they have got or could get a visa imminently.

My father’s family were lucky enough to escape by the skin of their teeth on the last boat out, and arrived in England as part of the Kindertransport program. However my father’s grandmother did not manage to escape and eventually died in Theresienstadt.

The rest of my father’s story and my family history can be read at the various links within the Family History page in the main menu above.

Israel is commemorating the 83rd anniversary of Kristallnacht by lighting up synagogues around the country all night – in memory of the synagogues that were set on fire and destroyed in Germany on that terrible night.

Israel is preparing to commemorate the 83rd anniversary of Kristallnacht, the Night of Broken Glass, a pogrom that targeted Jews in a series of attacks throughout Germany and Austria on the night of November 9, 1938.

During the pogrom, synagogues were heavily damaged and thousands of Jewish-owned businesses were destroyed. Estimates of the fatalities during the attacks vary – with low figures citing around 90 deaths – and as many as 30,000 Jewish men were arrested.

To commemorate Kristallnacht, International March of the Living, a Holocaust education program, launched an initiative known as Let There Be Light.

The movement encourages people and places of worship to leave their lights on during the night of November 9 to show solidarity with victims of hate.

See this beautiful video of synagogues around the world lit up in commemoration from a couple of years ago.

The post below is from Sussex Friends of Israel who write:

These are the worrying words of the German Ambassador to the U.K.
Worrying but absolutely necessary.
If this doesn’t scare you, I fear little will
#NeverForget #NeverAgain

As I have written in every post about Kristallnacht, I always mention the rise in antisemitism because it appears that the lessons of history are not being taught or learned. It is getting worse from year to year, and the last year feels like a new record, possibly exacerbated by the coronavirus pandemic and all the conspiracy theories surrounding it and the vaccines. Just read this article by i24 News on the rise in antisemitism on social media for one small example:

The movement, which released its study on Wednesday, is the only organization in the world working to monitor and report antisemitic content online, and eradicate hate speech in a variety of languages ​​and across seven major social networks, with the help of hundreds of volunteers from around the world.

The Middle East was the most important source of antisemitic content, followed by Europe and the United States.

Add to the mix the last conflict between Israel and Hamas in May, and the rise in Jew-hatred and violence against Jews around the world reached record levels, both in Europe and the United States.

Theodore Herzl, in his seminal book Der Judenstaat (the Jewish State) where he proposed the establishment of a Jewish state in order to eliminate antisemitism did not take into account that the modern State of Israel would become the Jew amongst the nations, and that antisemitism does not die, it just changes its outward appearance. Not only has antisemitism not disappeared completely, but it has morphed into an additional mutant – anti-Zionism, or rather anti-Israelism. Instead of targeting Jews antisemites now target the Jewish state.

If we remain united, whether we are in Israel or the Diaspora, and no matter what denomination of Judaism we are, and if we can retain our faith in Hashem, we will not only survive but thrive.