Chanukah Same’ach! Our own Chanukah Menorah lit up at the window

Chanukah has begun here in Israel, and windows are lighting up all over the country with candles and oil lamps twinkling in the dark.

At my sister – doughnuts and all!

At our daughter’s house, with the grandchildren’s lights as well.

My favourite, a Chanukiya made of balloons, standing 5 floors high in Schneider Children’s Hospital in Petach Tikva

Chanukah is one of my favourite chagim, since it requires very little preparation but lots of eating! 🙂

But beyond the physical military victory there occurred an amazing miracle of a spiritual nature – the miracle of the single cruse of pure oil that was found, which enabled the rededication of the Temple to take place. The oil was only enough to burn for one day, while 8 days were needed to prepare a new batch of pure olive oil for the Menorah. The miracles continued when that little cruse of oil sufficed for the full 8 days. Thus we celebrate Chanukah for 8 days, lighting candles each night of the festival.

For more background and history of Chanukah read Aish.com.

This year there is some great news in the Israeli headlines for a change: President Isaac Herzog, known for his dovish views, lit tonight’s first candle in Hebron at the Cave of Machpela (or the Cave of the Patriarchs). 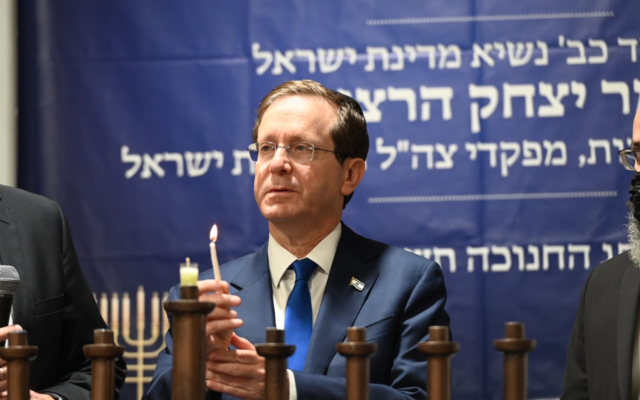 President Isaac Herzog lights the first Chanukah light at the Cave of Machpela in Hebron, Chanukah 2021

I was even more impressed that he didn’t cave in (‘scuse the pun, I couldn’t resist!) to the dire threats from the Palestinian Authority who cannot accept that Hebron is the birthplace of Judaism, and one of our holiest sites, the place where our forefathers and foremothers Abraham and Sarah, Isaac and Rebecca and Jacob and Leah are buried. The chutzpah of the Palestinians to not only not concede that Hebron is holy to the Jewish people, but to threaten our own President with violence if he lights a Chanukah candle there, is beyond the pale.

Palestinian Authority warns President Isaac Herzog against "storming" Cave of the Patriarchs in Hebron: "A provocation to the feelings of the Muslims."

I think the PA needs English lessons because they don’t seem to understand the meaning of the word “storming”:

I don’t think I have ever seen a slower “storming” in my life!

All joking aside, President Herzog’s candle lighting in Hebron went off safely with all due pomp and circumstance, including the former IDF chazan and choir:

The president was accompanied by Shai Abramson, Chief Cantor of the Israel Defense Forces, who took part in the candle-lighting ceremony Sunday evening.

“I am glad to light the first Chanukah candle with you here, in this holy place, the tomb of the Patriarchs and Matriarchs. My connection and my family’s connection to this place stretches back many generations.”

“Forty-five years ago to the month, Israel’s ambassador at the United Nations, my late father Chaim Herzog, later the Sixth President of the State of Israel, recited the verses from the ‘Chayyei Sarah’ Torah portion that we read in synagogues just a few weeks ago on Shabbat. The verses in which the Torah presents, quite atypically, the story of the purchase of the field of Machpelah in intricate detail. And thus, United Nations ambassadors sat there and heard the whole story.”

“They heard how our Patriarch Abraham purchased the field from Ephron the Hittite at full price. In a break from common practice, it was agreed that these verses would be circulated as an official document of the United Nations—a document that proves and exemplifies our connection to the Cave of the Patriarchs. And thus, the title deed for this holy site became an official document of the United Nations Security Council.”

“Brothers and sisters,” President Herzog said during the ceremony, “even today, with all of the difficulties – and won’t ignore the complexities for a second – the Jewish historical connection to Hebron, to the Tomb of the Patriarchs, to the legacy of the Patriarchs and Matriarchs, is beyond a doubt.”

“Recognition of this connection should be above debate.”

“When we are united around the wonderful light of the Hanukkah candles, it is important to respect Israeli statehood and its principles, and to listen to the ‘other’, to respect those who are different, to build bridges and to maintain our togetherness, of course without infringing on the rights of any individual or community, in terms of their beliefs or ideals.”

“We won’t agree about everything, but we must always remember that ‘We are all the sons of one man,’” Herzog continued, quoting from the weekly Torah section in Genesis.

The President also prayed at the Tomb while he was there: 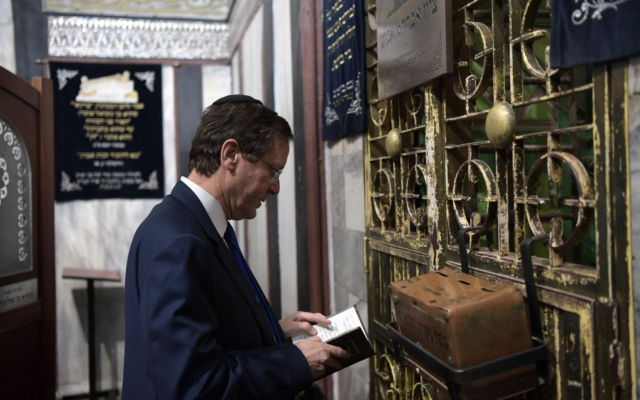 President Isaac Herzog prays at the Cave of Machpela in Hebron, Chanukah 2021

Today, as happened 2,000 years ago, there are those amongst our own nation who object to our sovereignty over our holy places.

In the days of the Maccabees those people were called Hellenists and they sided with the Greeks who wanted to strip all vestige of religion from the Jewish people. Today they are the surreal leftist organizations who object to Jewish sovereignty over Jewish holy sites, on the mistaken or malicious assumption that these lands do not belong to us. And today, as 2,000 years ago, we will triumph.

Happy Chanukah everyone! Enjoy the festival and the lights!