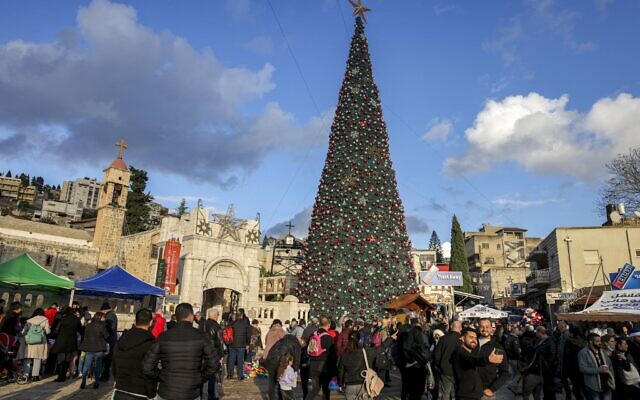 The giant Christmas tree outside the Greek Orthodox Church of the Annunciation in Nazareth, Israel on December 18, 2021. (AHMAD GHARABLI / AFP)

I would like to wish all my Christian readers and friends a Merry Christmas and Happy New Year. May 2022 be a year of good health, peace, happiness and prosperity for all of us. May this cursed plague be gone from us. Last year I prayed that we should all be able to return to a semblance of normality, without the spectre of the coronavirus hanging over us.  In the middle of the year we thought our prayers had been answered. Sadly it was a fleeting episode, and the virus it is still with us, though we now have the huge benefit of vaccines and various treatments for those who become infected, so it is with a measure of hope and optimism that I pray that we will see the end of the pandemic in 2022.

Unfortunately the festive season brings with it the annual bash-Israel article in the media. This year the anti-Israel, even anti-Jewish polemic was delivered by Justin Welby, the Archbishop of Canterbury who disgracefully accused Israel of being responsible for the plight of Christians in the Holy Land and for driving them out. As he should well know, this is a libel and slander of the first degree. Despite the isolated incidents of Jewish anti-Christian acts – which are roundly condemned by all responsible Israeli citizens and the entire spectrum of the Israeli political echelon – it is well documented that the sorry state of Christians in our region is mainly at the hands of the Muslims who treat them like dhimmis (second class citizens) whereas in Israel the Christian community is happy and thriving.

Israel’s Christian community grew by 1.4 percent in 2020 and numbers some 182,000 people, with 84% saying they were satisfied with life in the country, the Central Bureau of Statistics said in a report released ahead of Christmas.

The report, released Tuesday, came several days after Christian leaders in the Holy Land warned that their communities are under threat of being driven from the region by extremist Israeli groups, and called for dialogue on preserving their presence.

However, the statistics released by the CBS painted a different picture, indicating the community was growing and prospering, with particularly high tertiary education rates compared to the rest of the population.

The report also found lower numbers of Christians signing up for unemployment benefits compared to the Jewish and Muslim populations.

According to the CBS, 84% of Christians are satisfied with their life: 24% answered “very satisfied” and 60% were “satisfied.”

The Jewish Board of Deputies in the UK sent a sharp protest to the Archbishop and called for a meeting to discuss his disturbing claims:

In a letter to the arcbhishop, Board president Marie van der Zyl expressed “great regret” that she felt the need to respond to the article, which highlighted attacks on church sites and clergy as a reason for the decline of Palestinian Christians.

In her response, Mrs van der Zyl said that assaults on the Christian community in the Holy Land by “extremists” were unacceptable.

But she took issue with the article’s explanations for the long-term time of the Christian population.

“In the past century, both in Israel’s heartlands and the West Bank, the demographics show that the Palestinian population has increased significantly,” she noted.

“If the overall Palestinian population has greatly increased, but the Palestinian Christian population has significantly declined, then clearly there are more complex reasons than those raised in the article, which appeared to attribute this decline to Jewish settlers and the barrier built to halt the wave of terror attacks of the Second Intifada.”

She also took issue with some snidely anti-Jewish references made by the Archbishop:

She said she was “especially troubled” by a reference in the article to “the first Christmas” which “allows for the possibility of comparison to current events,” she said.

She was also concerned about a reference to the Christmas story taking place against “the backdrop of a genocide of infants” – an allusion to King Herod’s actions in the Gospel of Matthew. “I found this reference troubling,” she said, “because of the potential linkage which could be made between Christianity, Jews and the killing of children in any current context”.

This was “particularly distressing because I know that you have advocated for policies that support Jewish communal concerns. I fear that rather than encouraging reasoned dialogue on the issues you raise, this may in fact divide communities.”

It is heartening to learn that many British politicians also expressed fury at the Archbishop for his “blinkered remarks”:

The Archbishop of Canterbury has been accused by British politicians of being “blinkered and partial” amid a furious backlash over church warnings about the treatment of Christians in the Holy Land.

Supporters of Israel have pointed out that the state is almost alone in the Middle East in providing safety and tolerance for all religions. Sir Eric Pickles is one of a number of British political figures concerned by the Sunday Times article.

Tory peer Lord Pickles said he was “disappointed in the blinkered and partial view on where the real problem for declining Christian numbers in the region lies”.

Theresa Villiers, vice chairwoman of Conservative Friends of Israel, said: “It is unfair to attribute blame to the State of Israel, which is one of the only countries in the region which protects freedom of religion.

“The reference in the article to the Christmas story taking place against a backdrop of the killing of children is especially disturbing.”

Robert Halfon MP said it was “incredibly sad” that the archbishop had taken such a “one sided view”.

He added: “Israel is a haven for Christians and many have been persecuted across the Middle East especially by extreme Islamists. It was only few weeks ago he compared climate change to the Holocaust. It seems that to the CoE hierarchy, at best Jews don’t count and at worst, Israel and Jews can be humiliated whenever convenient.”

Jake Wallis Simons, the new editor of the Jewish Chronicle, slammed Archbishop Welby in a blistering article in the Spectator:

Yesterday, Mr Welby and Hosam Naoum, an Anglican bishop in Jerusalem, jointly penned an article in the Sunday Times entitled: ‘Let us pray for the Christians being driven from the Holy Land’. In it, they drew readers’ attention to the ‘frequent and sustained attacks by fringe radical groups’ in Israel, arguing that this was behind the sharp decline in the Christian population in Jerusalem. Nowhere else in the region. Only the Jewish state.

About half way down, the clergymen did briefly say that ‘in Israel, the overall number of Christians has risen’. They also acknowledged that ‘Christians in Israel enjoy democratic and religious freedoms that are a beacon in the region’. But these comments — inserted, one presumes, for the sake of accuracy — were quickly pushed aside. The Archbishops took care to remind readers that the ‘first Christmas’ had taken place ‘against the backdrop of the genocide of infants’, carried out by King Herod. ‘There’s not much in there about lullabies and cuddly farm animals,’ they wrote. The negative parallels were hard to ignore.

Marie van der Zyl, the president of the Board of Deputies, British Jewry’s representative body, has already responded with a fiery letter to Mr Welby. ‘In the past century,’ she wrote, ‘both in Israel’s heartlands and the West Bank, the demographics show that the Palestinian population has increased significantly.’

It goes without saying that no ‘fringe radical group’ in Israel has ever carried out anything like the Easter Bombings in Sri Lanka. The Archbishops were curiously silent on who these ‘fringe radical groups’ are or what motivates them. Yet in the examples they pointed to, cases of arson and vandalism against church buildings, it is hardline Jews who have been blamed. These attacks must of course be condemned. But this does not detract from the fact that overall, Christians in Israel are flourishing.

…. As a case in point, the first-ever Arab to hold a permanent appointment as a Supreme Court justice in Israel was Salim Jubran, a Christian — who sat in judgment over former prime minister Ehud Olmert. Much of this is thanks to schools run by the Christian community itself. But it should be noted that Christian schooling is a rarity in the Middle East. In Israel, they operate freely and with the full support of the state.

Compare this to the routine anti-Christian carnage across the region, which the Foreign Office has described as ‘coming close to genocide’. A government report stated that ‘the inconvenient truth is that the overwhelming majority (80 per cent) of persecuted religious believers are Christians’. This ranges from routine discrimination in education, the workplace and wider society all the way to kidnap, assassination and mass murder against Christian communities. It might not be the Holy Land, but surely such persecution deserves at least a mention by the Archbishops.

In countries like Syria, Yemen, Saudi Arabia, Libya and Egypt, the anti-Christian oppression is carried out by Islamist terrorists; in Iran, Algeria and Qatar, it is the state that carries out systematic discrimination and persecution. The effects are depressing. The Christian population in the region has declined from 20 per cent a century ago to just 5 per cent today (echoing the almost total exodus of Jews that took place in the late 1940s and 1950s).

Yet this Christmas, the Archbishop of Canterbury is ignoring all this to draw our attention to the Jewish state alone, which by his own admission is a ‘beacon in the region’, in the pages of the Sunday Times. Yes, Christians in the Holy Land deserve greater protection. Yes, attacks by Jewish hardliners are appalling, as is all sectarian violence. But by far the greater Christian persecution lies elsewhere in the Middle East.

To counter this depressing news, as I have done in previous years, I offer you some only-in-Israel Christmas events:

Did you know? Every year near Jerusalem's Jaffa Gate, hundreds of local #Christian residents receive trees for #Christmas for free! This year, #Santa came to help! Merry Christmas to all of our Christian followers!🎄🎅🏽 pic.twitter.com/ofilkQ6M06

LTC Ihab Shlian is the highest-ranking Armenian Christian in the IDF.

He is one of 100s of Christians who serve alongside Jews, Druze & Muslims.

We all stand together in defense of Israel.

We wish him and everyone celebrating a Merry Christmas. pic.twitter.com/JzdqX4TypH

Prime Minister Naftali Bennett addressed the Christian community in Israel and the world, wishing them all a Merry Christmas.

Merry Christmas to all those celebrating in Israel and around the world. pic.twitter.com/tAAXLaGpHi

I echo the words of the Prime Minister and wish all my Christian friends a peaceful, joyful festive season and I wish Merry Christmas to all those celebrating!

6 Responses to Wishing Merry Christmas to my Christian friends