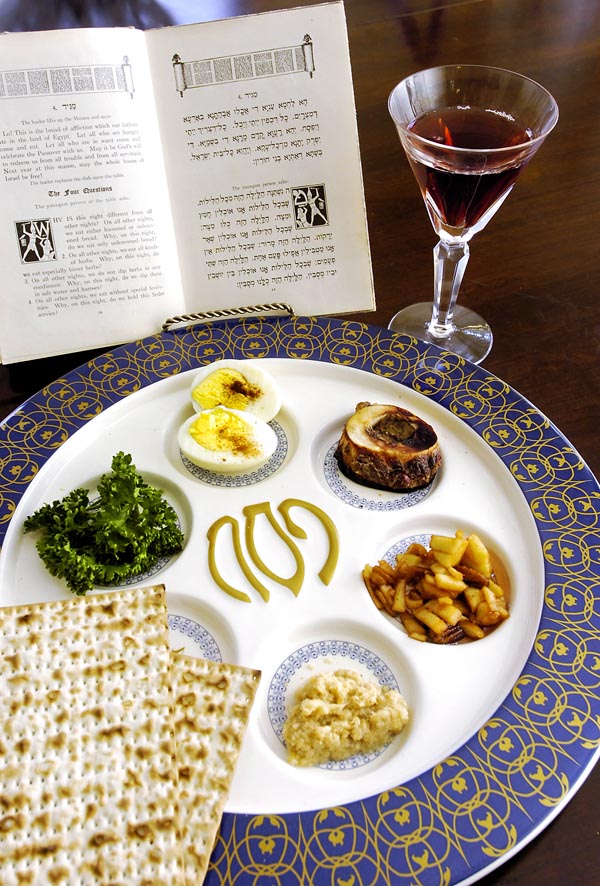 Chag Same’ach! The Seder plate, Matza, wine and the Hagaddah

The festival of Pesach (Passover) festival begins tonight and lasts until Friday the 2nnd, but since Shabbat follows straight on, we’ll be keeping 8 days until after the Shabbat. If you would like to learn more about Pesach, have a look at Aish’s website or Chabad.

We’re heading out to our daughter and son-in-law (and their many children!) for the Seder, together with our younger son and a good friend – so it’s definitely not going to be a quiet Seder night!  During the intermediate days of Chol Hamo’ed we hope to go on day trips to Jerusalem and other sites around Israel   And then the 2 day finale to Pesach will be spent at our older son and his family. That does not look like it will be any quieter than the first day! 😀

Just in time for the chag, a fantastic archeological discovery was uncovered in northern Israel: the oldest text in Hebrew on a tablet on Mount Eval:

Archaeologist Dr. Scott Stripling and a team of international scholars held a press conference on Thursday in Houston, Texas, unveiling what he claims is the earliest proto-alphabetic Hebrew text — including the name of God, “YHWH” — ever discovered in ancient Israel. It was found at Mount Ebal, known from Deuteronomy 11:29 as a place of curses.

If the Late Bronze Age (circa 1200 BCE) date is verified, this tiny, 2-centimeter x 2 centimeter folded-lead “curse tablet” may be one of the greatest archaeological discoveries ever. It would be the first attested use of the name of God in the Land of Israel and would set the clock back on proven Israelite literacy by several centuries — showing that the Israelites were literate when they entered the Holy Land, and therefore could have written the Bible as some of the events it documents took place.

“This is a text you find only every 1,000 years,” Haifa University Prof. Gershon Galil told The Times of Israel on Thursday. Galil helped decipher the hidden internal text of the folded lead tablet based on high-tech scans carried out in Prague at the Academy of Sciences of the Czech Republic.

The curse tablet was discovered in earth originally taken from a cultic site at Mount Ebal, near biblical Shechem and today’s Nablus. Mount Ebal appears in Deuteronomy 11:29 as a place of “curses” and is revered by some Christians and Jews as the place where the biblical Joshua built an altar as commanded in Deuteronomy 27. It is described in Joshua 8:31 as “an altar of unhewn stones, upon which no man had lifted up any iron.” 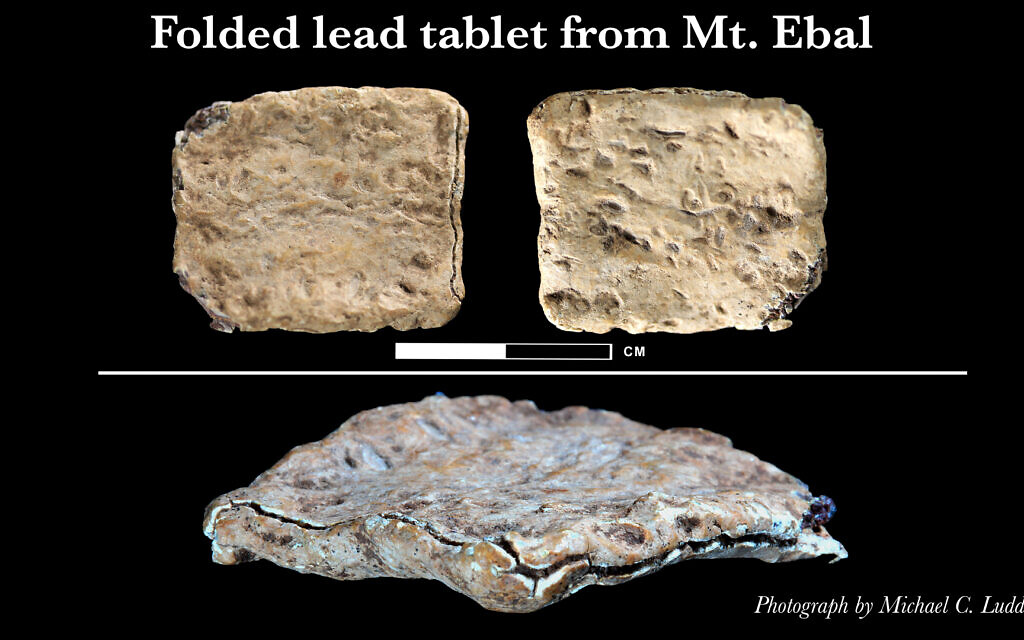 Views of the outside of the arguably Late Bronze Age lead curse tablet discovered on Mt. Ebal in 2019. (Michael C. Luddeni/Associates for Biblical Research)

The site known is known by locals as “Al-Burnat,” or “top hat” in Arabic, and is regarded by archaeologists as an exceedingly rare and significant illustration of early Israelite settlement. It is the only one of its type in the area. A consensus of archaeologists date the clearly cultic site to the early Iron Age, somewhere around the 11th century BCE, or when the Israelites evidently began to settle the land of Canaan. Other archaeologists push that date back to the 12th century or Late Bronze Age.

The scans were read by Galil and Pieter Gert van der Veen of Johannes Gutenberg-Universität Mainz. Speaking with The Times of Israel, Stripling said the reading includes the words “arur” (cursed) and “YHWH” (including the three main letters of the tetragrammaton).

“We recovered 40 letters, 40 on the inside and outside of the tablet. And they were all in this proto-alphabetic script which dates to the Late Bronze Age,” said Stripling.

Galil told The Times of Israel that the text is largely written in an archaic proto-Canaanite script, with some letters coming from hieroglyphs. The latest date of the epigraphic analysis would put it circa the 12th century, while some elements are dated to even earlier.

The majority Hebrew-language text, he posited, was written by Israelites as an internal legal document, a form of social contract, warning the person under contract what would happen if he did not fulfill his obligations.

It is always fascinating and even more so it is gratifying that our history and our Tanach are being confirmed in front of our eyes and the world. With all the denial and usurpation of our history, how wonderful to see our history come to life in our day.

And on a lighter note, here is the Israel Philharmonic Orchestra in their Pesach medley. Two years ago they played a similar medley on zoom as we were in the first and harshest lockdown from corona. How wonderful that we have returned pretty much to normal again and we must give thanks to Hashem as well to our previous and present leaders for getting us through this pandemic.

I would like to wish all my readers, along with all of Klal Yisrael, a chag kasher vesame’ach – a happy and Kosher Passover. May we all merit to celebrate in rebuilt Jerusalem “speedily in our days” as we say in the Seder.

Wishing you all Shabbat Shalom and Chag Kasher Ve’Samea’ach!