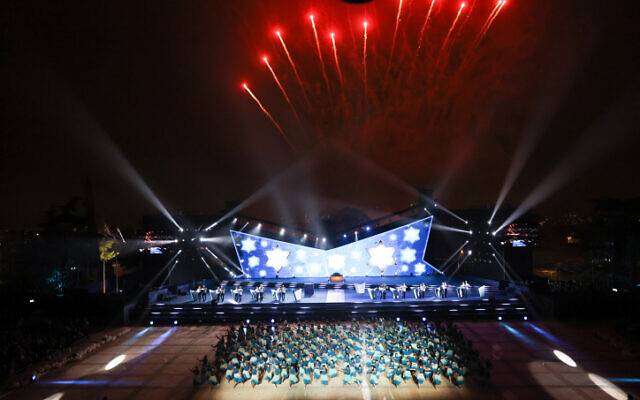 Fireworks light up the skies at the 74th anniversary Independence Day ceremony, held at Mount Herzl, in Jerusalem, on May 4, 2022. (Yonatan Sindel/Flash90)

Prayers marking the transition from the mourning of Yom Hazikaron to the celebrations of Yom Haatzmaut were held in synagogues throughout the country. For a change I attended the services at my niece’s shul on the other side of town and I thoroughly enjoyed and was inspired by the musically accompanied prayers.

Others watched the beautiful ceremony on Mt. Herzl in Jerusalem with the traditional 12 torch-lighters who were honoured for their contributions to Israeli or Jewish society, followed by flag bearers and other pyrotechnical displays. This year for the first time, both Jerusalem and several other municipalities used silent fireworks in consideration of those suffering from PTSD. Calls for unity within Israeli society were the key points of the various speakers:

“Right now, between these two days, with the transition that is so tough and so Israeli, we manage but for a moment to truly be one,” Knesset Speaker Mickey Levy said in a keynote address at the main state ceremony marking the start of Independence Day at Mount Herzl.

“We manage for a moment to not let any division get between us. And if we could do it yesterday, and we can do it tomorrow, I believe we can manage to do it every day; to choose to see the good in each other, to choose to brighten people’s faces, to choose partnership over division, to be together in this home for us all.”

PM Naftali Bennett spoke similarly about the need for unity:

“74 years of statehood has taught us that when the people of Israel are united – no one can beat us,” said Prime Minister Naftali Bennett at the state ceremony marking the 74th Independence Day.

“Dear citizens of Israel, Independence Day is a day of great pride for all of us,” said Bennett. “National pride in what we’ve gone through together, and in what we have achieved here together.”

The prime minister pointed to the hi-tech industry, the healthcare system and the opportunities provided to the periphery, saying “thank God, Israel can provide a livelihood for anyone who is looking for one.”

Concerning the security situation, Bennett stressed that “even though our enemies do not rest for a moment from trying to harm us, the State of Israel is stronger than ever.”

“The IDF, the Shin Bet and the Mossad are intensifying at an unprecedented rate: with lasers, missiles, cyber and above all – by investing in our bold and good soldiers,” said Bennett.

Bennett reiterated the message he stated on Remembrance Day, stressing that sectarianism destroyed the Jewish state in the Second Temple Period and that “a sovereign and united Jewish state has never survived here for more than 80 years.”

“Here we are in the eighth decade of the State of Israel,” said Bennett. “The decade we have never succeeded [in getting through]. This time we have another chance, a third chance for the Jewish people. This time we must, simply must succeed.”

“We must not allow hatred to capture us, to control us. We need to see each other with a good eye, to believe that the other also wants the good for the state, even if his opinion is completely different. We should all always place the good of the state above our sector, above our self-interest,” said the prime minister.

Bennett made a short video clip with a powerful message for Yom Haatzmaut:

Israel has achieved so much in just 74 years 🇮🇱

We’ve built a strong country with a booming economy and we recently ranked #9 happiest country in the world.

Want to know our secret? pic.twitter.com/TchA1cs4Q1

Returning to the ceremony at Har Herzl:

Maskless and crowded together with few coronavirus restrictions for the first time in two years, Bennett and thousands of others gathered at Mount Herzl for the ceremony, including recent arrivals fleeing Ukraine and Russia, as well as government leaders and other dignitaries.

As in past years, the highlight of the evening was a traditional torch-lighting ceremony honoring extraordinary citizens and others who have contributed to the country and Jewish communities.

Among those lighting beacons were Elizaveta Sherstuk, the head of the Jewish community center in Sumy, Ukraine, who helped hundreds escape the Russian invasion and is continuing to provide critical support in the devastated border city.

“This is the acknowledgment of the importance of what we do,” she told The Times of Israel, ahead of the ceremony.

The parents of Shira Banki, killed by a religious extremist in 2015 while marching in Jerusalem’s Gay Pride parade, also lit a torch, dedicating it to “those who choose to teach what is good, rather than condemn what is bad, who work toward bringing people closer and not pushing them away, connecting and not separating, fixing and not taking revenge.”

Also among the torchlighters was the commander of the police’s Yamam anti-terror unit, his face hidden by a mask. The man, whose name was also kept under wraps, was chosen to represent members of Israeli security forces working undercover or in sensitive posts and unable to reveal their identities — a first.

The glitzy ceremony was accompanied by what organizers called a “quiet pyrotechnics” display instead of the usual fireworks that light up the night sky. Many cities have chosen to forgo such displays this year out of respect to veterans suffering from post-traumatic stress disorder.

You can watch the ceremony here:

On Thursday morning and early afternoon, Air Force aircraft will do a flyover of much of the country, a popular and iconic feature of celebrations.

This year, the military will add a flyby over the West Bank city of Hebron and the adjacent settlement of Kiryat Arba. It will be the first time the flyby passes over that particular area, but not the first time for all West Bank communities. The IDF said the move was not a political statement, but related to the size of the community.

Tomorrow as is our custom we will be heading out to our children for the family “mangal” – BBQ – with lots of noise and fun, while millions of Israelis head to the beaches, the north, national parks, hiking trails or just hanging out with friends. And of course we will all be avidly watching the International Youth Bible Quiz. The deep and wide knowledge of these youngsters astounds me anew every year.

Just a small tweet from the United Arab Emirates illustrates how far Israel has come in its relations with its Arab neighbours. A message like this would have been unthinkable a mere few years ago. May these wonderful relationships continue to blossom and thrive!

חג עצמאות שמח! 🇮🇱
Congratulation Israel on 74 years of Independence! Today we celebrate #YomHaatzmaut, the day on which #Israel signed their independence in 1948 🇮🇱 pic.twitter.com/11PUMWmbyB

May we merit to see many more years of love and brotherhood in this crazy, wonderful little country of ours, till 120 and beyond!