Roots trip to Germany 13th May 2015, Day 3: Michelstadt and Stolpersteine

Our third day in Michelstadt centered less around the Jewish and family aspect, and more on the general history and background of the town.

Otto and Heidi took us on a lovely tour of the town, viewing the historical center and the town hall, built in 1484.

The wall of the “old town” of Michelstadt, from the hotel car park. Our grandparents and mother lived just next door to the tower, next to the synagogue 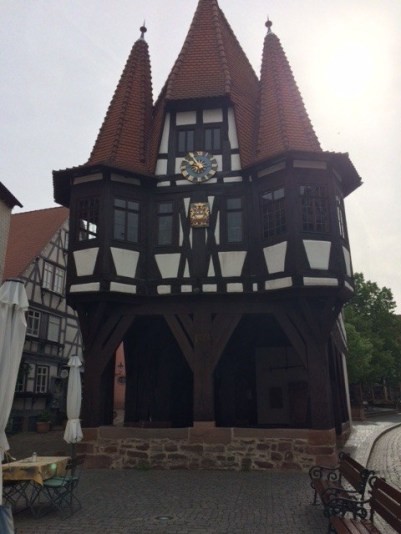 The historic town hall, built in 1484

We continued with a view of the “thieves’ tower” – the old prison, followed by a trip to the old “tithes office” – what would nowadays be called the Revenue or Income Tax offices. Maybe we should have seen these in the reverse order. 🙂

The Thieves’ Tower in Michelstadt

Continuing our walk through town, we admired the historical church, completed in 1490, with its magnificent interior and vaulted ceiling, and followed that with a walk to the town’s castle, occupied today by the current Count’s mother, with the Count and his family living in the beautiful house opposite.

Palace of the Count of Erbach-Furstenau, situated in Michelstadt

A short while later we were given a guided tour of Einhard’s Basilica, built in the early 9th Century. Einhard was Charlemagne’s chronicler and confidant. This Basilica is one of the very few Carolingian buildings that have largely survived intact.

This very interesting day returned full circle to recent history and the present day with a reception held in Michelstadt’s Town Hall by the Mayor, Stephan Kelbert, the vice-mayor and several other local dignitaries and citizens. Mayor Kelbert gave a very moving speech (simultaneously translated by Otto Haag) where he welcomed us as the family of survivors from Michelstadt, acknowledged the evil perpetrated by the Nazis, and explained how the town was determined to commemorate and memorialize the Jewish citizens of the town who were murdered in the Shoah. He described how the project of the “Stumbling Blocks” began and was carried out, and we then saw a short presentation of pictures of the stones being placed and their “inauguration ceremony”. (Apologies for the quality of the photos. The lighting wasn’t very bright). 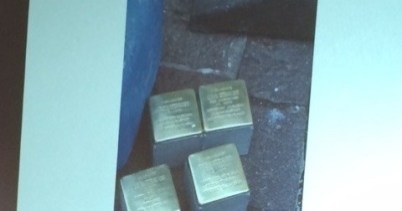 Picture from the presentation of the implanting of the stumbling blocks in Michelstadt. The Mayor stands on the left, looking on

Picture from the presentation: townspeople of all faiths join hands in prayer after the inauguration of the stumbling blocks 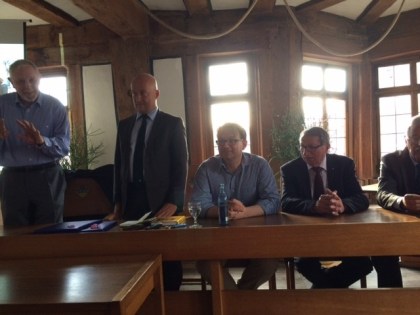 The Mayor presents David with a book

David gave a short impromptu speech in reply where he thanked Otto and Heidi Haag, Mayor Kelbert and the townspeople for their warm welcome to us and for all their courageous efforts in commemorating their Jewish citizens. He also made an important point for us personally: the years that our grandparents, our mother and her siblings lived in Michelstadt were the good years, and they had a perfectly normal happy childhood in the town. The family only moved to Frankfurt after a false accusation was made against our grandfather by a local Nazi in the local newspaper, even though the accusation against our grandfather was thrown out by the courts – by a Nazi judge at that!

The reception concluded with another surprise for us: the Mayor presented us each with a beautiful book about the Odenwald region, while we surprised the Mayor in return with a book about Israel. Great minds think alike!

From the Town Hall we proceeded back to our hotel, Zum Gruenen Baum, itself a historic building (about which more in a later post), to a dinner held in our honour by the same townspeople and Mayor. This time there were no speeches, just lots of conversation, laughter and football commentary (this last courtesy of my other half who was following a match between Bayern Munich and Barcelona). 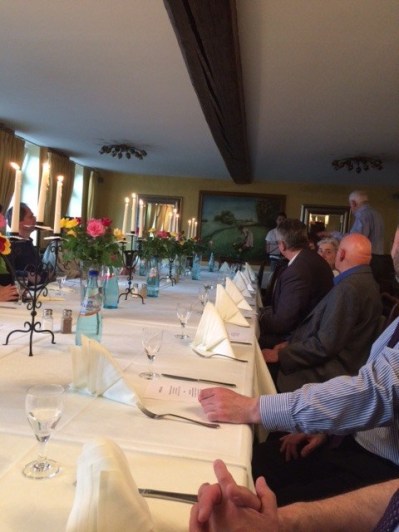 A word of thanks on behalf of our family was given by my husband who is fairly fluent in German. In his own family tradition he claimed the last word, expressing our gratitude to the Mayor, Church leaders, lay people and ordinary citizens of the town who made such great efforts to make us feel welcome and honoured, and who are so clearly sincere in the wish to “make good”, to correct the injustices of the past.

And of course, once again our boundless thanks to our hosts and organizers of our visit, Otto and Heidi Haag.

Our next day (Wednesday) day 4, was another extremely intense day with a visit to Frankfurt, our grandfather’s home town. More on that in the next post.