Turkey’s election results – good for Israel and the Kurds?

Some good news emerged from Turkey last week after their parliamentary elections.

1. Elections results are in and Turkey’s ruling AKP Party lost it’s parliamentary majority. As it remains the country’s largest party,  the question is what kind of governing coalition President Recep Tayyip Erdogan and Prime Minister Ahmet Davutoglu can cobble together. Opposition leaders say they’ll push for early elections if AKP is unable to form one.

And what does Erdogan’s bloodied nose mean for Israel? Citing a YNet report I couldn’t find online, i24 News wrote:

All of his potential partners – the nationalists, the Kurds and the Social Democrats – have criticized his hostile attitude toward Israel, believing that given the regional circumstances, Turkey should have joined forces with Israel to stand against their mutual enemy – Iran, according to the Israeli web site Ynet.

The experts interviewed by Ynet agree that Erdogan will have to balance his policy toward Israel and stop his rantings against the Jewish state in order to take into account his partners. This could be even more pronounced if the foreign minister is a member of one of his future coalition partner or partners and not of his Islamist-rooted AKP . . .

According to some analysts Erdogan may now be more concerned about his political survival than about fighting Israel – although this could have the opposite effect: as a result of his weakness, he could increase incitement against Israel in order to increase popular support for himself.

As a preliminary to possibly increasing such anti-Israel incitement, an AKP leader blames the Jews and Crusaders for the AKP’s election loss.

In the wake of the inconclusive elections results Burak Bekdil asks “Now what?”  First he provides an overview of the results:

Turkey’s “Election 2015” overcame justified fears of major ballot-box fraud, which many thought would reinforce the ruling Islamists and pave the way for a worse-than-Putinesque totalitarian rule for President Recep Tayyip Erdogan.

The election results themselves are best proof that any potential vote-rigging in favour of Erdogan was too little or too unsuccessful to become a game-changer: The ruling Justice and Development Party (AKP) needed at least 330 seats in parliament in order to rewrite the constitution in the way Erdogan wants; it got merely 258, not enough even to form a single-party government — leaving them in the minority in parliament for the first time since the AKP came to power in 2002.

Ironically, the AKP objected to the Supreme Election Board’s vote recounts in two provinces and three towns — all too small to change the fact that Erdogan is the lonely sultan in his spacious, $615 million presidential palace.

The elections results were as follows:

Any party will need a simple majority of 276 seats in Turkey’s 550-member legislature in order to govern alone. Preliminary results put the parties’ seats in the Turkish parliament as follows (with percentage of the popular vote garnered in brackets):

Turkish Kurds celebrate in the streets after their election gains

The HDP are the most interesting winners:

This party was the indisputable winner of the election. It managed to pass the national threshold of 10% needed for parliamentary representation, by surprisingly winning 13% of the national vote. The Kurds, under one roof of a political party, are in the Turkish parliament for the first time in the country’s history. The HDP campaigned against the AKP and Erdogan, but in favour of the continuation of peace talks with Kurdish rebels. It advocates autonomy for Turkey’s overwhelmingly Kurdish southeast. Its charismatic leader has ruled out any constitutional change that would make Erdogan an executive president, or that would form a coalition government with the AKP.

Bekdil then analyses the various options facing Erdogan for creating a coalition, or alternatively calling for early elections. 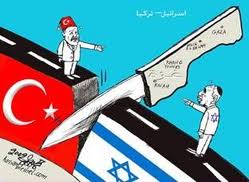 The big question for us in Israel is will Erdogan’s election setback mean improved relations with Israel?

The setback to Erdogan’s regime comes against the backdrop of the Turkish leader’s ongoing anti-Israel foreign policy stances and anti-Semitic rhetoric.

“Particularly since the Gezi Park protests in 2013 [against Erdogan’s increasingly authoritarian rule], Erdogan and other leaders of the AKP have spent a lot of time railing against various foreign interests that they claim do not have Turkey’s best interest at heart,” Michael Koplow, program director of the Israel Institute think tank, told JNS.org.

For example, during the recent election campaign, Erdogan lashed out at the foreign media for criticizing him—and floated an anti-Semitic conspiracy theory in the process. At a rally, he said that “Jewish capital” funds the New York Times and that the newspaper has consistently criticized Turkey’s leaders dating back to the days of the Ottoman Empire.

While the recent elections results were a setback for Erdogan’s ambitions to seize more power, they are unlikely to change Erdogan’s behavior, according to Koplow.

“His behavior has become more divisive and erratic over the last few years,” Koplow said. “It really started when the AKP hit its peak of power in 2011 and then when the AKP started to get criticism for the first time in 2013. I don’t think we can expect his behavior to change for the better. The Erdogan we see now is here to stay.”

Efraim Inbar, a professor of political studies at Israel’s Bar-Ilan University and director of the Begin-Sadat Center for Strategic Studies (BESA), is not optimistic about AKP’s imminent political downfall and does not expect a change in Turkey’s attitude toward Western nations and Israel.

“The struggle over the soul and identity of Turkey continues,” Inbar told JNS.org, explaining that while “the election is definitely a blow to the AKP, [the party] still remains the major political force in Turkey.”

Yet Dr. Harold Rhode—a distinguished senior fellow at the Gatestone Institute think tank and the former Turkish Desk Officer at the U.S. Department of Defense—is encouraged by the possibility that Turkey’s Republican People’s Party (CHP), which won 132 seats, as well as the Nationalist Movement Party (MHP) and the Kurdish Peoples’ Democratic Party (HDP), which gained about 80 seats apiece, may be considering forming a governing coalition that leaves out AKP. Other analysts, however, consider AKP’s absence from a coalition to be an unlikely scenario.

If a coalition is created without AKP, then “something very good will likely happen,” Rhode told JNS.org, saying that Israel “should begin a rethinking” of its relationship with Turkey in the event of that scenario. But Rhode cautioned that the Jewish state should “wait to see that things are actually happening the way it appears.”

The writers continue with a description of the major changes that have occurred in Turkey as a result of the elections:

The Syrian civil war was also a major factor in determining the outcome of the election.

“The AKP’s Syria policy is deeply unpopular throughout Turkey, but especially with Kurds in southeastern Turkey,” Koplow said.

Indeed, many Kurds were upset with the Turkish government’s response to the Islamic State terror group’s siege on the Syrian-Kurdish town of Kobani earlier this year.

“Many Kurds were convinced that Turkey was supporting the Islamic State, some even believe that Turkey created the Islamic state as a way to tamp down Kurdish nationalism,” Koplow said. He added that “historically the AKP drew a lot of support from conservative and religious Kurdish voters,” but the AKP’s policy in Syria was “the number one reason the Kurdish HDP party got past the threshold in the recent election and will keep support going forward.”

“I don’t see any signs that Turkey is going to shift their Syria policy,” said Koplow.

“People are also talking on the phone in the most vitriolic way against Erdogan,” whereas beforehand they were afraid to do so, he said.

In Turkish media, there is also a visible change. During the Erdogan era, Turkish newspapers have been frequently hit with huge tax-evasion lawsuits and have had to pay huge fees. To offset this cost, editors hired journalists who published pro-Erdogan content., Now those journalists are being fired. The media is essentially telling Erdogan to “go to hell,” Rhode said.

Returning to the question of Israel-Turkey relations, the picture looks slightly more optimistic than before:

“Whether [the bilateral tension] matters is another question, given that Turkish-Israeli bilateral trade is at its highest point ever, and it has only increased since the big [diplomatic] falling out in 2010,” Koplow said. “Economic relations are actually humming along quite nicely.”

Indeed, despite strained political relations, annual trade between Israel and Turkey stands at a robust $4 billion.

“Both Turkish and Israeli businesses would like their governments to put their agendas aside and resolve their differences,” said Koplow, who added that he doesn’t see that happening “as long as Erdogan and Netanyahu are in power.”

But Rhode is more optimistic, noting that he personally knows pro-American and pro-Israel officials “within the senior leadership of all three of the [non-AKP] parties.”

Anything that reduces the power of the would-be Caliph Erdogan and his AKP party can only be a good thing for Israel and the west.

4 Responses to Turkey’s election results – good for Israel and the Kurds?