Combatting BDS – Should we fight it or ignore it?

BDS is never far from the headlines, more often than not in the shape of #BDSFails (attempts at boycotts that were spectacular flops). For example in recent weeks we have seen the second-largest German bank, Commerzbank, shut down an anti-Israel BDS account  (via Reality) after Israeli Security Minister Gilad Erdan remarked that banks face”potential legal, reputational and ethical consequences.” And that’s not all:

In February, the Post reported that the French bank BNP Paribas shut the account of the BDS Campaign in Germany that was held by the bank’s subsidiary DAB in Munich.

The Post’s investigative series on BDS accounts in Europe has led to the closure of six accounts of pro-BDS organizations. The network of BDS accounts occasionally overlaps with the shadowy world of Palestinian and Iranian terrorism and unfettered movement in the EU.

Last week, the Austrian bank Bawag shut down the account of the Austria-Arab Culture Center, which had hosted convicted Palestinian terrorist Leila Khaled, who participated in the 1969 hijacking of a TWA jet. A year later, she hijacked EL AL flight 219. Khaled was in Europe as part of a speaking tour.

It’s not only banks that have joined the anti-BDS fight. US States have joined in the battle too:

New York Governor Andrew Cuomo signed an executive order last week punishing companies in the state that engage in BDS activity. For Cuomo to sanction the companies, they are required to have business with the state government.

“It’s very simple. If you boycott against Israel, New York will boycott you,” Cuomo said at the time.

Similarly, many academic institutions, both in the US and the UK, have rejected boycott calls despite the triumphant racket that the BDS bigots raise.

Israel’s economy has also not been negatively affected by BDS, and Israel is not isolated either diplomatically or culturally. Read through my recent “Good News Friday” posts to get an idea of how many international music stars have appeared in sold-out concerts here. And just this week (via Reality) the renowned actress Helen Mirren heaped praise on Israel and rejected calls to boycott Israel as she hosted the Genesis Prize ceremony.

So who is affected by BDS? Well, first and foremost BDS actually has an adverse effect on the Palestinians – the reverse of what the boycotters claim they want.

It has also greatly impacted on Jewish communities in the Diaspora, as Legal Insurrection reports:

The goal of BDS is to get a hold of the microphone at a church’s national assembly or a student government’s legislative body and spout anti-Israel propaganda into the assembly hall and make life difficult for Jews in American society. BDS is not merely an assault on Israel’s economy and reputation, but an attack on the Jewish Diaspora, which has historically been an important part of the pro-Israel community in the U.S.

If Michael Oren, Israeli Ambassador to the United States can’t finish his talk at UC Irvine, then what chance does an average Jew have in being treated fairly in a classroom at this school?

BDS activism has done more than poison the atmosphere on college campuses. BDS is also factor that has set an increasing number of Democrats against Israel. And that was the point.

One major negative effect that BDS has had on Israel is to make the country “poisonous”  internationally. Despite the fact that the boycotters wish to cause economic damage, they are very happy if they only manage to bring about a psychological association between Israel and trouble.  Thus a theatre might think twice about putting on an Israeli play if they know they are going to be picketed and suffer demonstrations outside the door. Or a company might reconsider ordering Israeli products if they can expect boycott calls (even if ineffective) or other harassment of its workers.

So what can or should be done to combat BDS?

Recently two historic conferences were held on this subject, marking the (very overdue) start of the battle against BDS:

At the United Nations this week, a large group of Israel-supporters convened to “Build Bridges, Not Boycotts” at an “International Summit” sponsored by the Israeli Consulate — and a dozen major organizations — whose purpose was to help train “Ambassadors Against BDS.”

On May 25-26, the newly launched Academic Engagement Network (AEN) held its first national conference. Organized by Advisory Council Chair Mark Yudof and Executive Director Kenneth Waltzer, the conference brought together some 100 or so academics to strategize about dealing with the crowning issue of our day on college campuses: the increasing hostility to Israel and Jews, as both fueled and epitomized by multiplying campaigns to boycott and divest from the Jewish state.

However, since we are Jews, we would be surprised if there were not dissenting opinions regarding this battle. Rabbi Jill Jacobs, executive director of T’ruah: The Rabbinic Call for Human Rights, wrote two op-eds, one in the Jerusalem Post and one in the Times of Israel, decrying the New York State anti-BDS law, saying it tramples free speech and will backfire.

Quoting from the JPost:

I don’t support BDS either. But the more the Jewish community yells about BDS, the more we malign and attack BDS leaders, and the more we try to deflect attention to better news from Israel, the more we prove the stereotype that the pro-Israel community has little regard for Palestinians.

There is no doubt that the BDS movement tolerates too much anti-Semitism, provides cover for anti-Semites gleeful about Israel’s every misstep and legitimizes those who call for wiping Israel off the map. But most of the students and other activists who have joined the BDS movement do not come to it through hatred of Israel or Jews, but rather through horror at the very real human rights violations suffered by Palestinians living under military occupation. Such activists are looking for nonviolent means of protest, only to find that Jewish establishment leaders reject every such strategy and tactic, from BDS to the UN to the International Criminal Court.

Now, with the precedent set by Governor Cuomo, these activists may even come to find their rights to free speech limited and will likely blame the Jewish community.

Jacobs gives much too much credit to those who join the BDS movement. They are not so much aghast at “the occupation” but rather they join in because they seek a thrill; the youngsters especially love the “radical chic” idea of “non-violent resistance”. The good of the Palestinians is not nearly as important as “sticking it” to the Israelis.

She continues with the tired old trope of “the military occupation” and the settlements being the root of all evil, and if only it would end, BDS would come to an end. This of course ignores the statements of the BDS founders themselves, as we are shown “In their own words” at the BDS Cookbook:

“BDS represents three words that will help bring about the defeat of Zionist Israel and victory for Palestine.”
–Ronnie Kasrils

“[Israel] was Palestine, and there is no reason why it should not be renamed Palestine.”
–Omar Barghouti, Founder, Palestinian Campaign for the Academic and Cultural Boycott of Israel 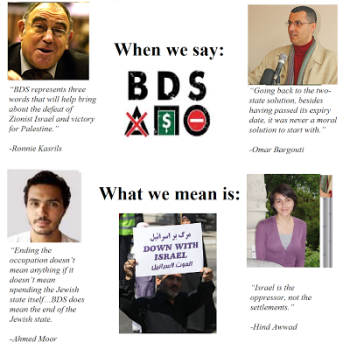 So what should be done? Enact laws? Or comply with the demands of the boycotters and end the “occupation and settlements” if not commit national suicide?

Interestingly there is a third way, and that is to stop talking about it and stop fighting it altogether! Ari Soffer, editor of Arutz Sheva explains that we should deny BDS the oxygen of publicity, for that is what they thrive on: (emphases are mine):

Among the more predictable speeches and one-liners, there were several important truths expressed. In particular, Prime Minister Binyamin Netanyahu, in a pre-recorded message, correctly noted that the BDS movement will never succeed in its declared goal of enacting a global boycott of Israel. Even within Europe, the hub of much anti-Israel agitation, Israeli trade figures are rising. The odd B-list celebrity’s cancelled tour, or a boycott of an Israeli cosmetics store in London, isn’t going to bring the Jewish state to its knees. (Shortly after publication of this column, a Bloomberg report illustrated just how massively the BDS campaign is failing.)

And they know that. At most, those behind the BDS campaign see a genuine global boycott, divestment and sanctions campaign against Israel as a far-off, very long-term goal, certainly not realizable at this time, if ever. Their main and immediate objective is in fact far simpler, and aimed closer to home: Create a brand, rally the troops behind it, and set about dismantling and shouting down all organized opposition in the grassroots arena – be it on campus, on the streets, or in the halls of power.

In that, they have been far more successful. Indeed, their brand is so powerful that even pro-Israel groups use it, coming up with new “anti-BDS” campaigns and initiatives almost every other day it seems. We are being played like the proverbial fiddle. By perpetually “fighting BDS” we further energize its brand, puff up the egos of a mostly pathetic array of extremist activists by screaming about how dangerous they are, while simultaneously succeeding only in accentuating the sense of fear and intimidation felt by “our own”.

Soffer has not only identified the problem, but he has come up with a simple and practical solution:

Create our own brand.

Or rather, recreate it. Because really, the formula for winning over the hearts and minds of the public – on university campuses, in the media, on the streets and in the halls of power – has been lying in our laps this whole time: Zionism.

No, not “pro-Israelism”. Not beaches, diversity, high-tech and liberal democracy. All of these are lovely things, and promoting “brand Israel” as an aside won’t do any harm at all. But none of that can ever replace our most powerful conceptual weapon: the Jewish story.

Imagine: An indigenous nation – one of the oldest still around today – ethnically-cleansed, scattered, oppressed, murdered, forcibly assimilated, brought to the very edge of annihilation, returning to its ancestral homeland after 2,000 years, against all the odds. And then, when confronted by the forces of imperialism, the tiny, beleaguered people which defies history fought and defeated scores of far mightier armies. They outlasted the Ottomans, defeated the mighty British Empire, and smashed the (first British- then later Soviet-led) Arab armies whose openly stated goal was to exterminate us and re-install the “pax-Arabia” (mostly in the service of their masters in London or Moscow).

Today, free and independent in our land, regressive forces from both the East and the West continue to buffet our liberated homeland, all as we continue to slowly and painstakingly rebuild Hebrew civilization in Eretz Yisrael, and shake off the legacies of two millennia of slavery, exile and oppression.

Read the rest of Soffer’s article. He is not a head-in-the-clouds dreamer. He recognizes that there are times when BDS must be tackled head-on and cannot be ignored. But we should stop holding conferences and making “sky is falling!” pronouncements. We should pay heed to his concluding words:

And we must certainly stop defining all of our actions by the other side’s terms. Every “anti-BDS” conference, every social media meme screaming “Is THIS an apartheid state?!”, is simply pouring fuel on the fire and further perpetuating those very myths.

Instead, we must embrace the narrative of Zionism, wholly and without any ifs or buts, and confront “BDS” and every other hateful acronym armed with our own, far more potent, independent narrative.

I think he makes some very good points. However I wonder if any of us have the strength of character to do as he recommends. I certainly hope so.

9 Responses to Combatting BDS – Should we fight it or ignore it?