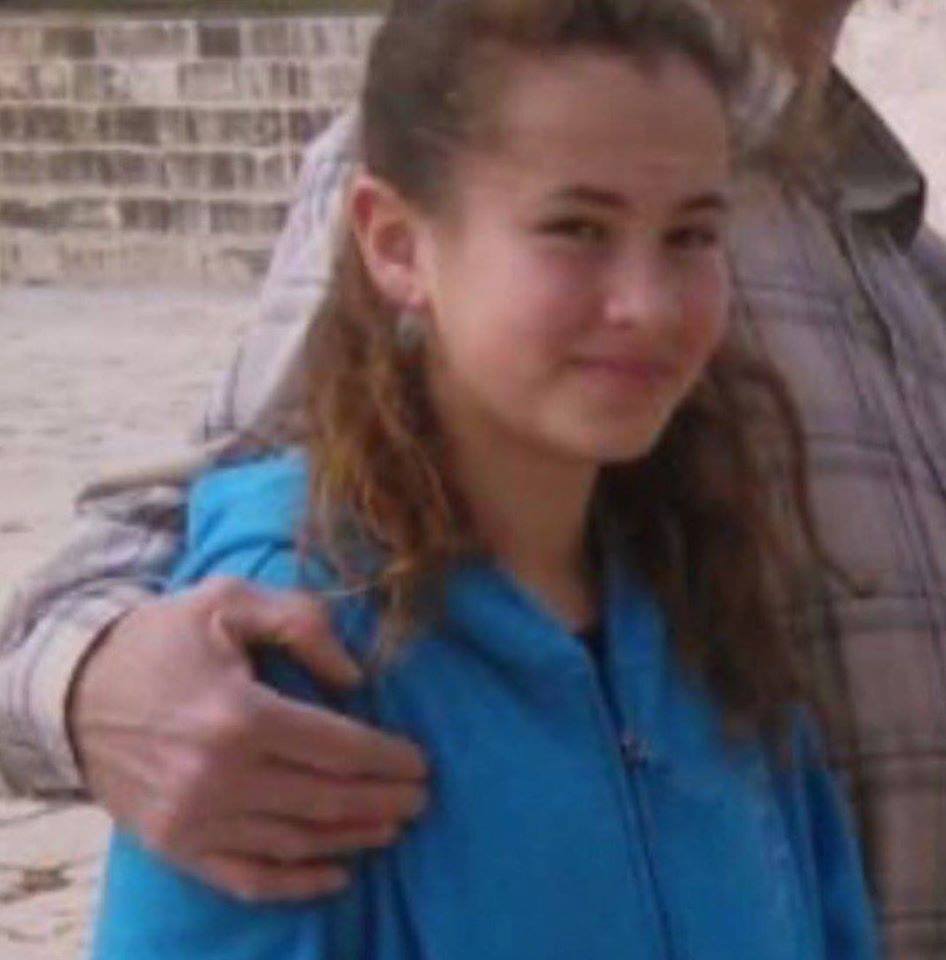 Dreadful news today from the town of Kiryat Arba, near Hebron. Hallel Yafa Ariel, a 13 years old schoolgirl, was asleep in her bed when a Palestinian terrorist, in his teens himself, jumped the security fence of the town and ran towards the Ariels’ house. There he stabbed Hallel eight (!) times, killing her.  The town’s security team had received noticed of a breach in the fence from its electronics system and began hunting for the intruder. Simultaneously they heard sounds from the Ariels’ house, and burst in. But it was too late for Hallel Hy’d. The murderer turned on one of the security team, and another member shot the terrorist dead.

A Palestinian terrorist stabbed a 13-year old to death in her bedroom on Thursday morning after he infiltrated the West Bank settlement of Kiryat Arba, which is located next to Hebron.

A Magen David Adom paramedic said that when he arrived at the scene the teenage girl, Hallel Yaffa Ariel, was unconscious and was not breathing. They were able to resuscitate her at the scene, but the it was touch-and-go during the whole journey to Sha’are Tzedek Hospital, as they continuously fought to keep her alive.

She was pronounced dead shortly after her arrival, without ever regaining consciousness.

Hallel, had been a member of a dance troop and had performed in Jerusalem the night before. Her father, Amihai, is a cousin of Agriculture Minister Uri Ariel, and runs a boutique winery.

The terrorist, believed to be 17-year old, breached the settlement’s fence and then entered the Ariel home that was located on a security road, near a yeshiva high school for boys.

The settlement’s security team responded to the incident. According to the IDF, the terrorist stabbed a member of that security team, before another member of the team shot and killed the him.

Among the Magen David paramedics who responded to the scene, was the wife of the wounded member of the security team.

She went with her husband to the Hadassah Medical Center in Ein Karem. Doctors there said that the wounded man, believed to be age 30, was suffering from gun shot wounds and that his injuries were not life threatening.

The Prime Minister reacted immediately by ordering a closure of the terrorists’ village, and the rescinding of the family’s work permits.

At the beginning of the week he wrote a post saying that “the death is a right and i am asking for my right.”

If he wanted to die so badly he could have just jumped off a bridge or a roof. Why did he have to kill an innocent child?

The answer lies partly with his “illustrious” family:

His uncle, Yousuf Tarahirah, carried out a car-ramming attack in Hebron in March.

But the main answer to the question: what would spur a 17 year old schoolboy (as the murderer will no doubt be portrayed in a sympathetic media) to jump over a security fence and hunt out a sleeping girl? and then stab her eight times. And to continue stabbing at armed security forces?

The answer of course is incitement. When Palestinian children are indoctrinated to kill, kill, kill the Jews, and when their leaders proudly proclaim that when they see an Israeli they’ll slit his throat – what result did anyone expect?

Watch this horrifying video about the indoctrination and incitement of Palestinian children educated in UNRWA schools. Yes, that’s right, schools funded and run by a UN agency (via This Ongoing War). How could those children become anything BUT Jew-haters?

The UNRWA schools are funded in part by the EU – that very European Parliament that applauded Mahmoud Abbass’s water-libels mere days ago.

And the EU helps to fund terrorist murderers even further:

@Abc11Ab reminder: the awad cousins who slayed the Fogel family in Itamar still get paid by #EU taxpayers money https://t.co/n1htexSNFy

I cannot begin to fathom the pain and horror of the family. I can barely bring myself to imagine the scene myself. I keep seeing in my mind’s eye my teenage granddaughters, the same age as Hallel Hy’d, they go to similar dance and social groups, sleep in late on summer holiday mornings, and – crucially – they too live in “settlements”.

There can be NO justification for the murder of innocents, whether they live in Tel Aviv or settlements, outposts or kibbutzim. Varda Epstein notes so pertinently that Hallel’s murder will not doubt be belittled, if not justified, because she is a “settler”.  Aussie Dave found some of these vile reactions almost immediately. Read them at your peril:

No, for being a war criminal residing in illegally occupied land. Legitimate military target & burning in hell🔥 ^_^ https://t.co/8deWeHz7JN

That’s about as much as I can stomach. There’s much more at Israellycool.

Netanyahu demands that the world not only denounce the murder, but that they take action to stop the incitement:

PM: The horrifying murder of a young girl in bed underscores the bloodlust and inhumanity of incitement-driven terrorists that we are facing

But before he makes demands of the world there is a lot more that Israel itself could be doing: closing down mosques where the imams preach incitement to murder and Jew-hatred; closing down UNRWA-run schools and appointing a panel of educators to re-educate Palestinian children into the norms of humanity; and to take IMMEDIATE action against terrorists and their families. Not to let court cases drag on through months of judicial delay. The IDF should be instructed to destroy the terrorist’s house TODAY. The family and his supporters should expelled to Gaza or Syria or Jordan, or maybe the ever-loving EU today.

There is no need to wait for approval from our “allies”. It will never be forthcoming. We have to act for ourselves, and if not now, when.

May the family of Hallel Yafa Ariel be comforted amongst the mourners of Zion and Jerusalem.