There was a time when the British Conservative Party was known as the Nasty Party.  How the wheel has turned. That derogatory title is now well-deserved by the Labour Party.  Since Jeremy Corbyn was reelected head of the Labour Party last week this position has only been further confirmed, in particular by the leadership of the Momentum grass-roots movement.  Its vice-chair, Jackie Walker, was previously suspended – and then readmitted to the party,  lays a spurious claim to being Jewish in order to cover her antisemitism. In the last week she has found another hole, reached bottom, and continued digging. 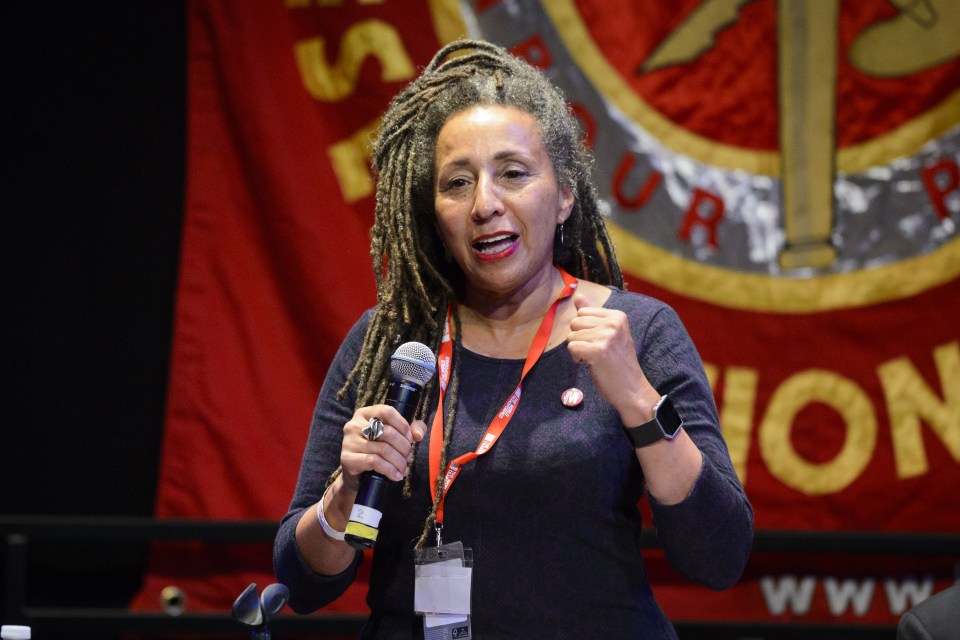 It started, or rather continued, when Jackie Walker spouted  a series of offensive comments last week as Harry’s Place reports:

Now it transpires that she came out with a series of offensive comments relating to antisemitism at a meeting on Monday. First she complained that she hasn’t been able to find a definition of antisemitism she can work with. There are many definitions – surely she can find one she can put up with, and even if she can’t, that doesn’t stop her trying to engage with the problem rather than find excuses to brush it aside.

Next she complained that Holocaust Memorial Day was too exclusive – ‘look at the website’ someone in the audience suggested.  This would have informed her that HMD is a time to remember all victims of the Nazis, for example the Roma, and victims of other genocides too.

She then sought to trivialise the way Jewish schools (and other Jewish organisations and events) rely on security, and seemed unconcerned when reminded that Jews were targets for terrorist attacks.

Finally she completely garbles ‘the Livingstone theory’ (sic) – ‘if it is an antisemitic issue, if you deny it, it’s antisemitic’. I assume she was referencing the Livingstone formulation which in fact refers to the accusation that the issue of antisemitism is being raised in bad faith to deflect criticism of Israel.

"I would never play down the significance of the Shoah" Yet this earlier today: pic.twitter.com/bImhQnkUqD

Her apology was in fact a non-apology. It was a pathetic attempt at an excuse for her antisemitism and she only compounded her sin as she responded to the accusations of antisemitism with a non-sequitur:

Breaking: Jackie Walker statement from Momentum. She says film of her at antisemitism session was leaked unethically… pic.twitter.com/iHMBWJk7uO

When she remarked the Holocaust is not solely the preserve of the Jews one has to wonder why she would want to be a victim of such a terrible genocide!

Meanwhile, Labour’s, or rather the Jewish Labour members’, woes were not over.  The Jewish Labour Movement representative was heckled during his speech at the Labour Party Conference.

Jewish groups condemned Walker’s comments and the Labour cover up. Non-Jewish members, including even Momentum members, also issued condemnations and demanded her resignation.

Momentum Chairman Jon Lansman was appalled by Walker’s behaviour and was said to be seeking her resignation.

The Guardian’s Marina Hyde (Via Harry’s Place) wrote a damning report which perfectly encapsulated the absurdities at the Labour Conference, “Bending reality like a spoon“. I’m still not sure whether to laugh or cry: (emphases added):

By way of illustration, consider this snapshot of about three hours on the first evening of the conference. At 7.15, there was a Jewish Labour Movement rally against racism and antisemitism. At 7.30, there was an event organised by Jewish Socialists for Justice, entitled Anti-Zionism is not Anti-Semitism. By this stage, a chap manning the Labour Friends of Israel stand in the conference auditorium had revealed that he had been approached by another chap asking, rhetorically, “But wasn’t there a Jewish plot to oust Jeremy Corbyn?”, following up with the inquiry, “But it was organised by Jewish MPs, wasn’t it?” and continuing in this vein until his attempt to confirm that Angela Eagle’s “husband” is Jewish caused the LFI volunteer to curtail the discussion.

A few minutes’ walk away, at Momentum’s concurrent conference, the hours between 5pm and 7pm were given over to a debate featuring the movement’s vice chair, one Jackie Walker, whose chief claim to fame was previously being briefly suspended from the Labour party for an allegedly antisemitic social media post (though today it was revealed she had enlivened a conference antisemitism training session by declaring it would be “wonderful” if Holocaust Memorial Day was not just for the Jews). On Sunday, however, she took the opportunity to judge that her claim to Jewish identity had been questioned by Jewish publications, “because I’m a black person and that’s it”.

Fellow panellist and Jewish Labour chair Jeremy Newmark was rebuked from the floor for comments about the Holocaust, the speaker referencing the current “police holocaust” against black people. Newmark cited a poll showing just 8% of British Jews supported Labour; an audience member demanded: “Whose fault is that!” The event’s title: Does Labour have an Antisemitism Problem?

To which the only possible answer seems to be: what does it effing look like? I’m sure there were party conferences in the year 1933 at which the Jews were this much discussed. But not, perhaps, in this country.

Finally, it all got too much even for Momentum who could not help but realise that Walker had become a liability, and yesterday we were informed that Jackie Walker has been dismissed from her position.

Whether this will translate into a dismissal from the Labour Party itself remains to be seen.  If she is not, this will only confirm the epithet bestowed upon it by Theresa May.

British Prime Minister Theresa May blasted the Labour Party at the Conservative Party Conference yesterday, calling it “the nasty party“:

British Prime Minister Theresa May on Wednesday accused the UK’s opposition Labour Party of “tolerating anti-Semitism and supporting voices of hate,” after a string of its members were suspended for making anti-Jewish and anti-Israel comments.

“You know what some people call them — the nasty party,” May told the final session of the Conservative Party’s conference in Birmingham, the Daily Telegraph reported.

British PM Theresa May at the Conservative Party Conference

Labour, she said, is “not just divided but divisive,” and “determined to pit one against another. To pursue vendettas and settle scores. And to embrace the politics of pointless protest that simply pulls people further apart.”

“That’s what Labour stands for today. Fighting among themselves. Abusing their own MPs. Threatening to end their careers. Tolerating anti-Semitism and supporting voices of hate,” she continued.

Labour, she said, had given up the right to present itself as the party of the worker.

“Let’s put an end to their sanctimonious pretense of moral superiority,” she said, because Labour’s “extreme ideological fixations” had lead them to “simply stop listening to the country, when they abandoned the center ground.”

Certainly Labour is no party for Jews at the moment. The only good thing to be said is that their behaviour is making it almost sure that they will not win the next general election under the current leadership.

13 Responses to Labour – the Nasty Party