UNESCO Shmunesco: denying history one fact at a time 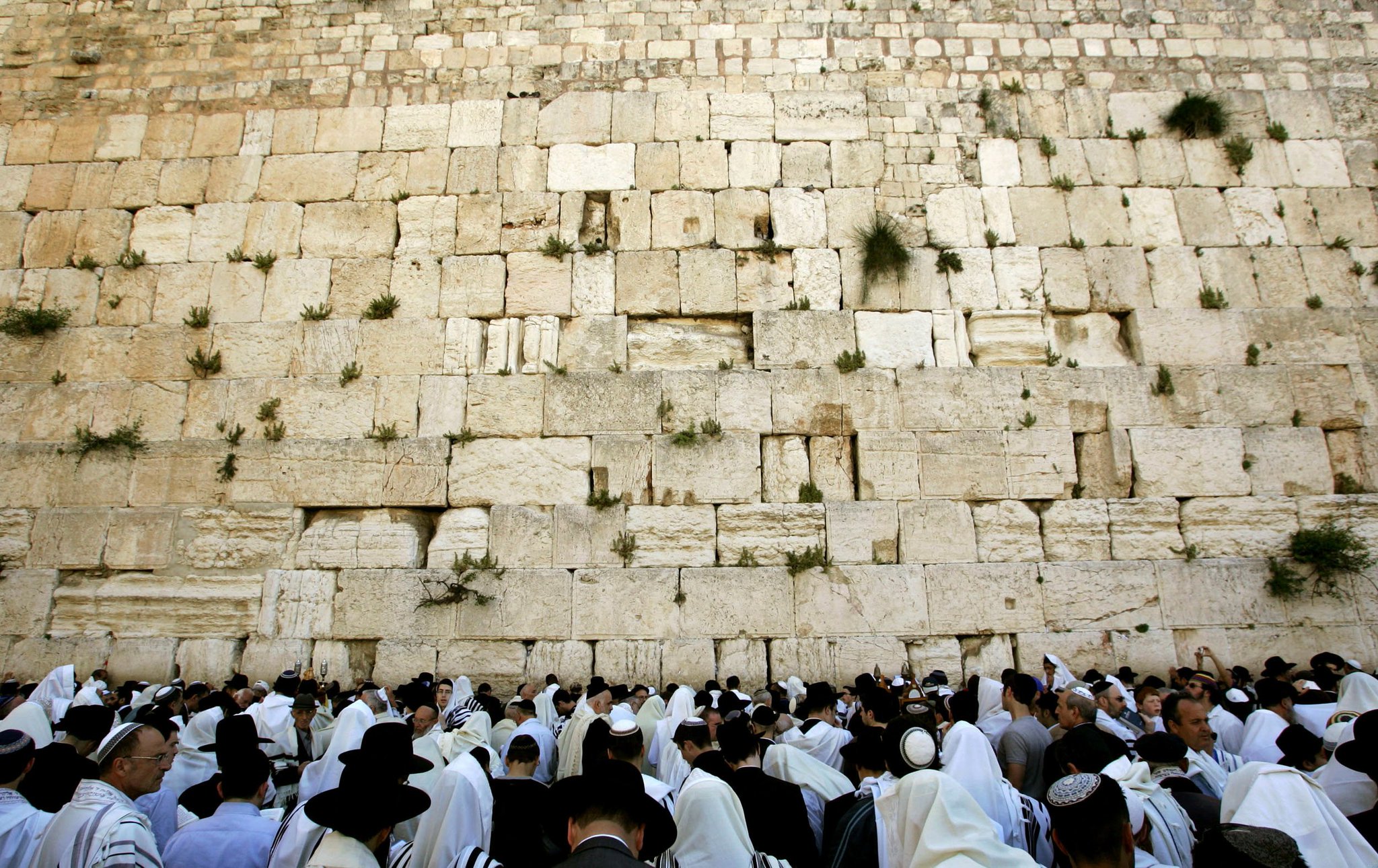 It looks like Yom Kippur came a day too early for the UN, who have yet more apologizing and atoning to do. UNESCO voted today to deny any Jewish connection to Jerusalem. Yes, you read that right.

The resolution was supported by 24 states, including Russia and China. 6 countries opposed and 26 abstained.

The resolution maintains that the Western Wall and Temple Mount will be referred to by their Arabic names and the Hebrew terms for the sites will only appear in quotation marks in UN references.

Earlier Israel had tried to prevent the decision, even asking the Vatican to help prevent the resolution. The Vatican enjoys observer status in UNESCO.

This vote differs only marginally, and more egregiously, from a previous vote taken in April: From the first link:

In a recent UNESCO meeting, Arab states and the Palestinian Authority have pushed a new resolution, explicitly describing the Temple Mount as an exclusively Muslim holy site, referring to the site of both ancient Jewish temples by its Arabic name: Haram a-Sharif.

Israeli diplomats called the move an attempt to discredit the ancient Jewish connection to the Western Wall in the eyes of the international community.

The resolution does recognize the importance of Jerusalem in general to the three major Abrahamic faiths, but observers noted that this was likely an attempt to make an otherwise transparently anti-Israel measure appear more balanced. The order of faiths mentioned in connection to Jerusalem is Islam, Christianity, and Judaism last.

It seems that UNESCO just can’t get enough of denying Judaism’s connection to its holiest site and capital city.

If you want to get a glimpse of the insanity, take a look at Israellycool who posts the draft resolution – which in my anger I read as “daft resolution” which is surely a better descriptor. Some of the highlights:

Deeply deplores the failure of Israel, the occupying Power, to cease the persistent excavations and works in East Jerusalem particularly in and around the Old City, and reiterates its request to Israel, the occupying Power, to prohibit all such works in conformity with its obligations under the provisions of the relevant UNESCO conventions, resolutions and decisions;

Excuse me? Who is illegally excavating and destroying priceless artefacts from the First and Second Temple period? The Waqf, on the Temple Mount, that’s who! If Israel is responsible for any failure, it is of failing to stop the Waqf and throw them out for destroying our heritage and that of Christianity.

Calls on Israel, the occupying Power, to allow for the restoration of the historic status quo that prevailed until September 2000, under which the Jordanian Awqaf (Religious Foundation) Department exercised exclusive authority on Al-Aqṣa Mosque/Al-Ḥaram Al-Sharif, and its mandate extended to all affairs relating to the unimpeded administration of Al-Aqṣa Mosque/Al-Ḥaram Al-Sharif, including maintenance, restoration and regulating access;

I was not aware that the status quo had been changed. In fact the only people changing the status quo are the Waqf themselves who refuse to allow the slightest sign of Jewish prayer, and hardly a Jewish presence at all, on the Temple Mount. Again the Israeli police and government are complicit in this Waqf denial of religious rights, but since it is anti-Jewish denial I am surprised that UNESCO are objecting! (I am being sarcastic here in case anyone misses my British sense of humour).

Let’s have a look at those storming Jews:

“Storming” Jews on the Temple Mount. Some storm!

I do not think “storming” means what you think it means.

Deprecates the continuing Israeli unilateral measures and decisions regarding the Ascent to the Mughrabi Gate, including the latest works conducted at the Mughrabi Gate entrance in February 2015, the instalment of an umbrella at that entrance as well as the enforced creation of a new Jewish prayer platform south of the Mughrabi Ascent in Al-Buraq Plaza “Western Wall Plaza”, and the removal of the Islamic remains at the site, and reaffirms that no Israeli unilateral measures, shall be taken in conformity with its status and obligations under the 1954 Hague Convention for the Protection of Cultural Property in the Event of Armed Conflict;

OK, as soon as I saw the words “Al Buraq” I stopped reading. Anyone who believes in a flying horse but not in the retaining wall of Solomon’s Temple needs their head examined.

For our part, Israel’s Mission to UNESCO in Paris has given board members and international diplomats a brochure detailing the deep historical connections Judaism has to those sites. You can see the brochure here.

“These facts and evidence will leave no doubt, and without undermining other connection of other religions to the holy places in Jerusalem, of the deepest and longest Jewish presence in Jerusalem since ancient times,” Ambassador to UNESCO Carmel Shama-Hacohen wrote.

It has come to this, Israel having to send out brochures to somehow prove our connection to sites Jews have been praying, crying and mourning at for thousands of years? I doubt a glossy brochure will convince anyone who does not already see the truth.

I think it is pathetic that Israel has to give out brochures to explain the Jewish connection to Jerusalem and the Temple Mount.  Since this connection forms the core basis of Judaeo-Christian Western civilization, anyone who does not know is not interested in knowing, and no amount of propaganda or educational leaflets will change their minds.

In my opinion Israel should make a dignified withdrawal from UNESCO and cut off all contact with that corrupt, absurd, ridiculous and shameful organization. When they come to their senses, maybe we can consider returning. I can see absolutely no upside to belonging to an institution that not only denies history, but denies current events that are taking place in full view of the international media in real time.

As I type these words I can hear the banging and clanging of Sukkot being built in our parking lot, as well as in neighbours’ gardens. On Sunday night the festival of Sukkot will begin, one of the three pilgrimage festivals when the ancient Jews made their way to – gasp – Jerusalem! To – gasp! – The Temple! Not to Haram al Sharif. Not to Al Aqsa. The Temple.

Their they brought offerings from their harvest to give thanks to G-d for His bounty. The offerings were presented, not to Sheikhs and Imams at the al Aqsa Mosque but to the Priests, the Cohanim, in the Temple, there on that very same Temple Mount, the Har Habayit.

No amount of renaming sites and rewriting history will change those facts.

Shame on the UN, shame on UNESCO and shame on every one of those countries who voted yes and even those who abstained. (What? They couldn’t make up their minds? My mind boggles).

My mother had a good suggestion: Let us present a draft resolution that Mecca is a holiday spa in Arabia. Let’s see how they like that!

What's next? A UNESCO decision denying the connection between peanut butter and jelly? Batman and Robin? Rock and roll?

UNESCO: There's no Jewish history in Jerusalem. Also, the earth is flat.

Wow. @UNESCO has just denied any #Jewish link to #Jerusalem. A city that in 1000BCE was declared by King David as capital of the Jews. SHAME

So #UNESCO has denied #Jewish ties to #Jerusalem and in so doing has pushed itself further into irrelevance.

#UNESCO go full #retard say #Jerusalem (made by king David ) is a #muslim site not related to #Israel https://t.co/lFzVm4RHiJ

I’ll let the final word go to the Board of Deputies of British Jews:

No anti-Israel motion tabled @UNESCO will ever change the reality of the Jewish heritage of Jerusalem – shame on those countries backing it! pic.twitter.com/bhfkE2qTTF

18 Responses to UNESCO Shmunesco: denying history one fact at a time