John Kerry delivers his speech on Israel and the peace process at the State Dept. on 28 Dec. 2016

The Obama Administration’s “January surprise” took its next steps today with John Kerry’s absurd and outrageous speech on Israel, in which he claimed to lay out his vision of Middle East peace but which in practice was simply a screed attacking the settlements as he accused the Israeli government of being led by the most extreme elements:

US secretary of state John Kerry on Wednesday laid out his “comprehensive vision” for the future of Middle East peacemaking, saying that a two-state solution was the “only way to ensure Israel’s future as a Jewish and democratic state,” but promising that the US would not seek further UN action on the conflict.

Can we trust him and his boss on that promise that they won’t seek further UN action? I’m not willing to bet on it.

In a speech that lasted well over an hour, Kerry described settlements as a central obstacle to achieving an agreement between the sides and declared that Israeli actions in the West Bank were putting the two-state solution, which he said was the sole path to peace, “in serious jeopardy.”

Kerry argued that settlement construction in the West Bank was being “strategically placed in locations that make two states impossible” and said the “the status quo is leading toward one state, or perpetual occupation.”

Settlement expansion, he declared, “has nothing to do with Israel’s security.”

Castigating the coalition of Prime Minister Benjamin Netanyahu, he said it was “the most right-wing in Israel history with an agenda driven by the most extreme elements. The result is that policies of this government, which the prime minister himself just described as more committed to settlements than any in Israel’s history, are leading … towards one state. In fact,” he added, “Israel has increasingly consolidated control over much of the West Bank for its own purposes.

With less than a month as secretary of state, Kerry sought to champion the two-state outcome he worked to achieve throughout the last four years, saying it was the only path forward. Incoming president Donald Trump has signaled he may not be committed to the two-state framework.

He rambled on in this vein for the rest of his speech. You can read more at the link, and the entire text is here.

What is much more worthwhile is to watch and listen to Netanyahu’s blistering counter-attack:

David Horovitz of the Times of Israel blasted Kerry, saying that he did everything but call Israel apartheid.

About half an hour into John Kerry’s valedictory lecture from the State Department on Wednesday evening, Israel’s most popular television station, Channel 2, stopped broadcasting it live and switched to other programming. The country’s two other main TV stations, Channels 1 and 10, had already electronically left the building. Given that Kerry’s anti-settlement and anti-occupation address was primarily directed at the Israeli public, the ratings-conscious schedulers’ impatient transition to other material rather encapsulates the climate in which the secretary’s extensive remarks were being received here.

Many in the Israel of 2016 would share some of the arguments they largely didn’t hear Kerry deliver on Wednesday evening. Many recognize the dangers of being permanently intertwined with millions of hostile Palestinians, and fear that the expansion especially of those settlements and outposts that lie to the east of the security barrier increases that risk, and thus puts a two-state solution in danger, threatening Israel’s Jewish character, or its democracy, or both. Kerry’s was a fiery critique, indeed, marked by the allegation that the settlement movement is driving the agenda of the Israeli government, and that Netanyahu has been allowing some of the most extreme voices to draw Israel closer to the Zionist nightmare of a single bi-national state between the Mediterranean Sea and the Jordan River. Just about the only charge Kerry didn’t lob, this time, was apartheid.

But the secretary and his president long ago lost much of the Israeli public, even many of the settlement critics, by underestimating the depth of Palestinian opposition to the very fact of the Jewish state’s existence. The president and his secretary have underestimated, too, the consequent scarring — physical and psychological — that the Israeli public has accumulated over decades of war, terrorism, and demonization as the Palestinians and those who championed their cause have sought Israel’s obliteration.

… He mentioned terrorism and incitement. But the Obama administration never truly internalized the impact of these endless decades fighting off attempted destruction. And Kerry has self-evidently never been willing to internalize that in the vicious Middle East of the past few years, talking up the possibility of relinquishing control over adjacent West Bank history — with its recent history of suicide bomb factories, with Hamas angling to take control, with a hostile Iran emboldened to the east by the Obama Administration’s own nuclear deal — is just that for most Israelis: talk.

We left south Lebanon. Hezbollah took over. We left Gaza. Now it’s ruled by Hamas. When the secretary expresses his “total confidence” that Israel’s security requirements in the West Bank can be met via sophisticated multi-layered border defenses and such, he quite simply loses Israel.

We left south Lebanon. Hezbollah took over. We left Gaza. Now it’s ruled by Hamas. When the secretary expresses his “total confidence” that Israel’s security requirements in the West Bank can be met via sophisticated multi-layered border defenses and such, he quite simply loses Israel.

He would have had more chance of success — or at least of creating a climate in which prospects of progress would be brighter — had he focused more of his attentions on the toxic climate among Palestinians. They are relentlessly educated on the illegitimacy of Israel, with that narrative hammered home over social media, by their political and spiritual leadership, sometimes in their schools. He never strategically attempted to tackle that process of indoctrination.

Easier to place overwhelming blame on the settlers rather than the Palestinians. Or, heaven forbid, on yourself.

Herb Keinon at the Jerusalem Post had similar harsh criticisms of Kerry’s viewpoint:

Long, and without many new elements in it. What a tired-looking, hoarse Kerry did for more than an hour was pretty much compile the “greatest hits” from numerous speeches he and US President Barack Obama have given over the last number of years on the Mideast.

Nevertheless, two elements of the speech were striking.

The first was the insistence that the only solution to the conflict is either two-states,  or one. This is the mantra that has been repeated for so long, that it has become axiomatic. But it also drowns out any possibility of creatively looking at other options, a different way.

If the efforts to negotiate two states has failed for so long, perhaps it is time to consider whether there may be other options that might bring Egypt and Jordan into the equation. Perhaps what is needed is a reassessment of all the the assumptions over the last 23 years that have ended in the current stalemate — first and foremost that the only option is two states from the Mediterranean to the Jordan River.

For instance, in 2010 former National Security Council Giora Eiland spelled out a plan for a Jordanian-Palestinian federation, in which the West Bank and Gaza would be states in an expanded Jordanian kingdom.

Another idea would see the establishment of a Palestinian state, but it would be based on land swaps between Egypt, Israel and a future Palestinian entity that would significantly expand the size of Gaza, allow Israel to retain a good percentage of the the West Bank, and provide Egypt with a land link to Jordan.

These ideas are too often dismissed as unrealistic, something that the Palestinians would never accept. Kerry reinforces that way of thinking with his stating as truth that it is either two states or one state.

The Kerry speech was also telling in that it included a call for Israel to withdraw from the territories and uproot settlements. This is a demand for Israel to make huge compromises.  There was, however, no comparable demand for compromise on the Palestinian side.

Kerry called, and says that the US has done so on innumerable occasions,  for the Palestinians to stop the terrorism and the incitement, and to build up good governing institutions. But those are not compromises.

Throughout his career, both in the senate and as secretary of state, Kerry’s speeches on Israel give the listener a sense that he knows what is better for Israel, its future, and security than the Israelis themselves. His speech Wednesday night was true to that rather patronizing form.

The reactions to Kerry’s speech in the United States were similarly scathing. First we have the heart-warming supportive statement from President-elect Donald Trump:

We cannot continue to let Israel be treated with such total disdain and disrespect. They used to have a great friend in the U.S., but…….

not anymore. The beginning of the end was the horrible Iran deal, and now this (U.N.)! Stay strong Israel, January 20th is fast approaching!

But it’s not only the Republicans who have rejected the Obama regime’s direction. Below is the statement by the House Democratic Whip Steny Hoyer: 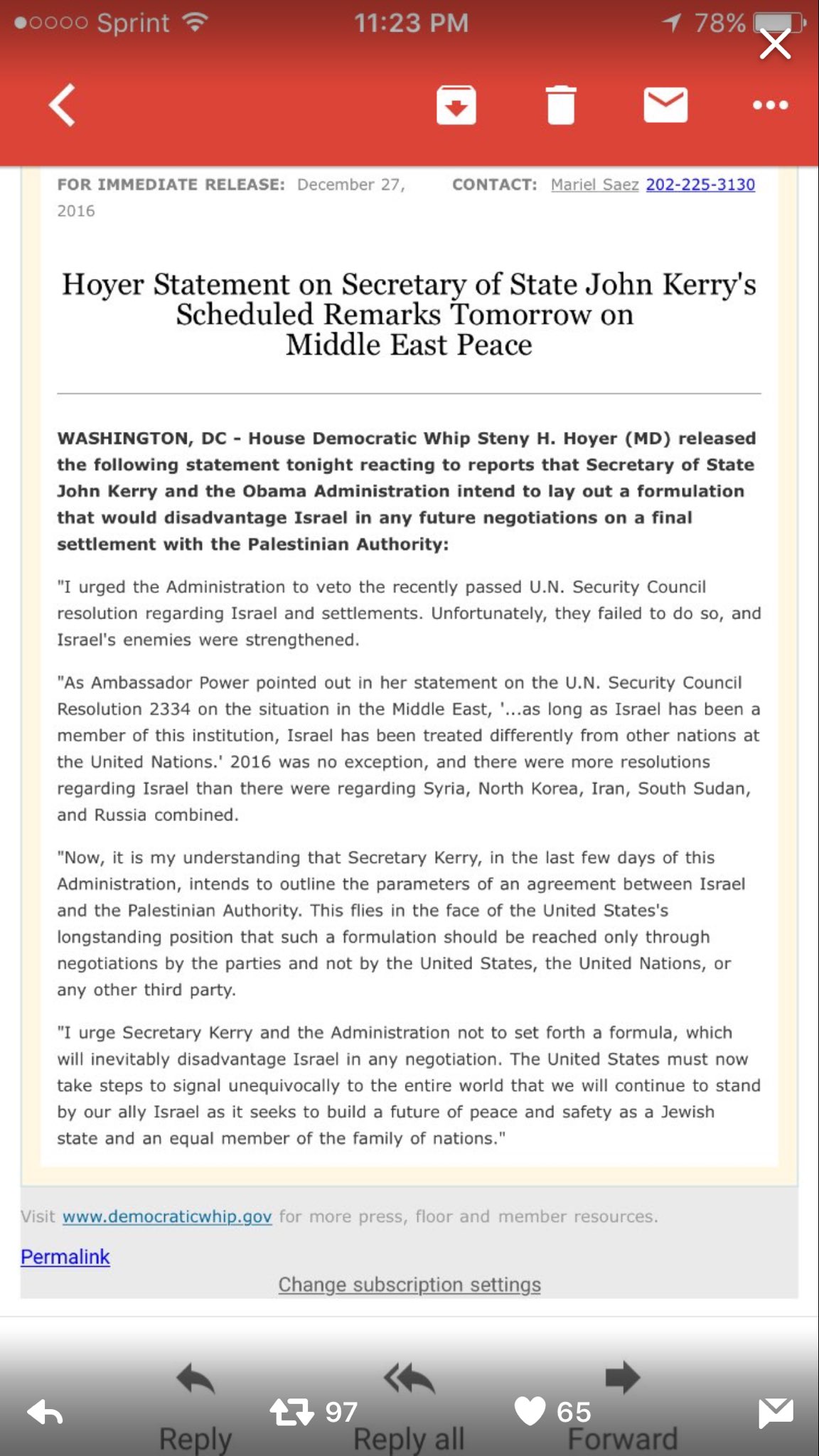 Thank you for your support, Mr. Hoyer. You are on the right path towards restoring Israelis’ and Jews’ trust in the Democratic Party.

Here is a selection of other reactions via Twitter:

If settlements are an obstacle to peace why was there no peace before 1967?Not a single "settlement" in Judea Samaria before 67. @JohnKerry

Kerry: "Arab countries won't make peace with Israel without Pal peace." Um, Jordan and Egypt? And unofficially Morocco and others?

Kerry says crossings into Gaza are closed. Flagrantly false. Many tons of goods are transported from Israel into Gaza every day.

Kerry really sticking on this lie that Israel cannot be both Jewish and democratic without a two-state solution. This is, again, a lie.

Kerry: "I have total confidence Israel's security can be met by doing what I say." Most delusional Secy of State ever.

Dear John Kerry,
I'm an Israeli Dad of 5 kids.
Please don't presume that you value peace anymore than we do.
But we value our lives too.

If you truly believe that Jews building houses is as much a threat to peace as Palestinian terrorism, then you're morally blind. @johnkerry

And one final tweet which includes a map that encapsulates the entire Middle East problem, and at the same time clearly demonstrates Kerry’s (and his boss’s) blindness when it comes to Israel:

Yes John Kerry, if only this orange sliver was smaller there would be peace. pic.twitter.com/afvRO0O9Kq

23 Responses to John Kerry’s speech on Israel: delusional and disgraceful