On Wednesday Israel and the Jewish world will be celebrating the 50th anniversary of our miraculous victory in the Six Day War of 1967. Jerusalem has gone into high gear for the extraordinary anniversary (though this has been somewhat complicated by the upcoming visit by Donald Trump on Tuesday) with concerts and shows and tours and other celebratory events.

Yesterday I kicked off my own personal Yom Yerushalayim celebrations by going on an organized trip with my shul to Jerusalem.

We went first to Har Hatzofim (Mount Scopus) where our guide Achikam explained the history of the site, particularly how it became an isolated Jewish enclave surrounded by a sea of hostile Arabs during the British Mandate period until June 1967. We were told how a small garrison of Jewish soldiers remained on the mountain, being rotated and supplied every two weeks by convoys guarded and checked by an Arab policeman, a Jewish policeman and a UN observer. The Jewish enclave was not allowed to be manned by soldiers, only policemen, and they were allowed to be armed only with pistols. Of course they managed to get around these restrictions somehow. Nevertheless it was a very precarious situation.

We were lucky enough to have amongst us an elderly haredi-looking man who, it turned out, had been a soldier on Har Hatzofim during that period! He regaled us with his stories, some were terrifying and some were very entertaining.

We entered the main lobby of the Hebrew University campus where we saw a huge painting of the cornerstone-laying ceremony in 1925. In the background you can see the fabulous view for which Har Hatzofim is famous. After all, the name (also in English) implies it is looking over something – and that something is the view of Jerusalem, the surrounding hills and communities, the Dead Sea, and the mountains of Moav (Jordan).

Painting of the cornerstone-laying ceremony of Hebrew University on Mt. Scopus in 1925 (click to enlarge)

The same view from Mt. Scopus today (click to enlarge)

In the second view above, taken from the same spot where the artist sat in 1925, one can see how the area has developed: in the foreground is the Arab town of El Azariya, and further back is the Israeli town of Maaleh Adumim. The blue patches on the horizon are the Dead Sea and shrouded in mist are the mountains of Moav.

We continued on to the Botanical Gardens within the Hebrew University campus on Har Hatzofim. These gardens were established in the 1930s to preserve the flora of the Land of Israel because of encroaching urbanization. Remember, this was the 1930s! What would the founders have made of modern Israel? 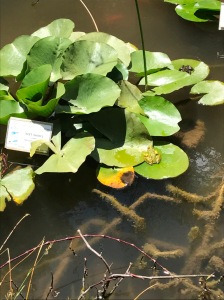 The gardens are a beautiful serene setting, laid out by climate (mountainous, rivers, swamps, desert), and within the mountain area there is a small seating area created in memory of a soldier, Shmuel Zvi Toder, who was killed defending Har Hatzofim. He was the uncle of our very own guide, Achikam, who explained that his name means “my brother lives” – he was named by his mother in memory of her brother. There is also a botanical library on campus in memory of his uncle. 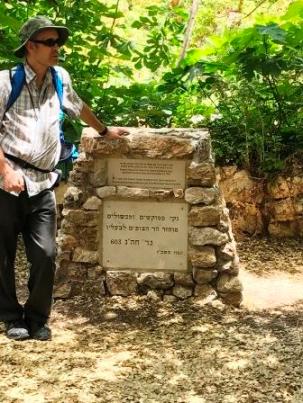 Achikam next to the memorial

As we wove our way through the gardens we came upon the grave of Nicanor, a wealthy Jewish exile living in Egypt during the Second Temple period, who contributed the huge copper gates to the Temple. His bones were reburied on Har Hazeitim – the Mount of Olives – and nowadays two founding fathers of Israel, Menachem Ussishkin and Yehuda Leib Pinsker, are buried in the cave. 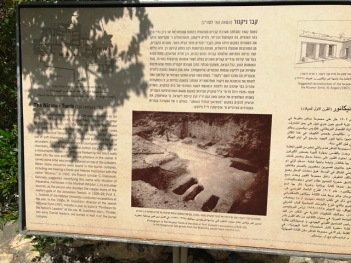 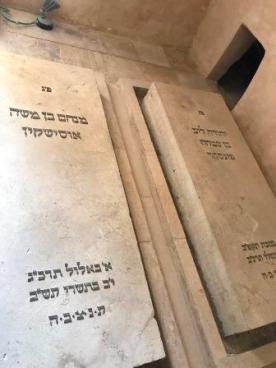 The tour was a lovely way to start our day in Jerusalem, and as we headed back to our bus we couldn’t help noticing the number of Arab students on campus. No signs of apartheid there!  (This at the same time as the University refused to play the Hatikva national anthem at the graduation ceremony for fear of upsetting those same Arab students. Something needs to be rethought here). 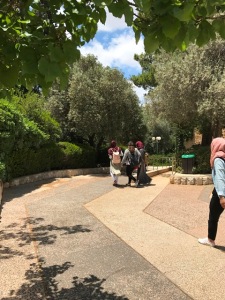 It is a short ride – or rather, it is supposed to be a short ride – from Har Hatzofim to the Shaar Ashpot (Dung Gate) of the Old City. However, with Jerusalem traffic jams exacerbated by Donald Trump’s impending visit, the journey took the better part of half an hour. This enabled us at least to get a good view of the ancient Jewish cemetery on Har Hazeitim (Mt. of Olives).

The ancient Jewish cemetery on Har Hazeitim (click to enlarge) 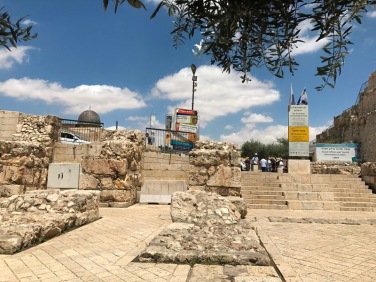 After a quick lunch break in the shadow of the Al Aqsa (how irreverent of us!) we set off to the Davidson Center – the Jerusalem Archeological Park – where Achikam guided us around the new Mikvaot Path. Dozens of ancient mikvaot – ritual baths – have been uncovered near the entrance to the Temple Mount where pilgrims would have bathed before entering the Temple to bring their sacrifices. It was a fascinating tour, where one feels one is walking on history. You can touch the ancient stones which thousands of hands from thousands of years ago have also touched, and you can almost hear the prayers and words from those times. On the way to the Mikvaot Path we stopped to look at Robinson’s Arch. This is not an arch at all, simply the very small remains of what was an enormous arch supporting a giant staircase ascending to the Temple Mount. 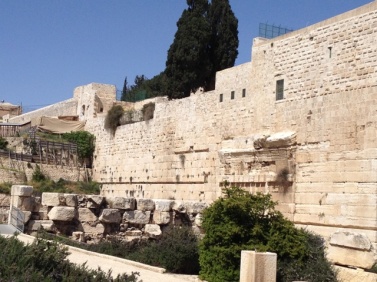 On the ground below are piles of huge stones which were pushed off the Temple Mount by the Romans as they destroyed the Temple. These stones still lie in the same place that they have lain for the last 2,000 years. The weight of the stones cracked the street floor below, and this is clearly visible. 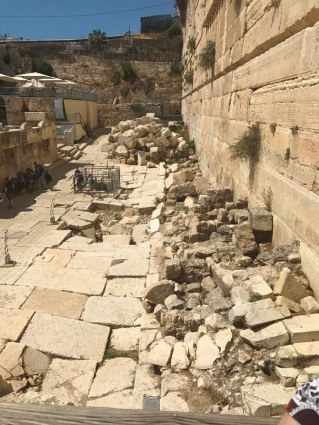 Fallen stones from the Temple Mount and the cracked street below

One of the stones is a corner piece, with the very clear Hebrew inscription on it: לבית התקיעות להכריז – translation: the place of blowing the Shofar for a declaration. This stone was situated at the corner of the walls of the Temple, and every Friday evening a Levite would stand there and blow the Shofar, signalling the beginning of Shabbat.

To this day all over Israel, a siren blares on Friday evening as Shabbat begins. Seeing this stone and the clear inscription gave me the shivers, particularly as my father is a Levi himself. He was with us on this trip and was very moved at seeing the stone.

The Mikva Path was fascinating, both for its historical interest and for the technology used at the time. We think we are so clever in the 21st century with our modern technology, but the ancients were much cleverer than us without modern aids like electricity and computers. The water storage and channeling systems were ingenious, and even their hygiene was approaching modern levels, with a row of latrines for people to use before immersing in the mikva and approaching the Holy Temple.

Here you can see some of the mikvaot and the water cisterns, though the pictures do not do justice to their huge dimensions. 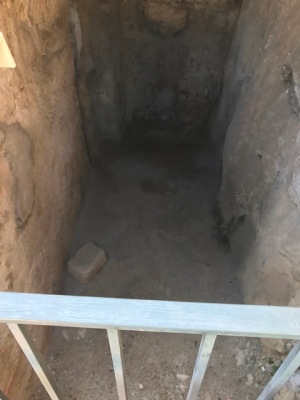 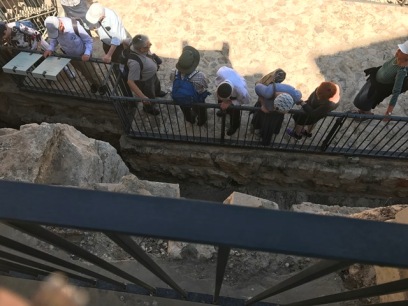 Looking down into the water channels 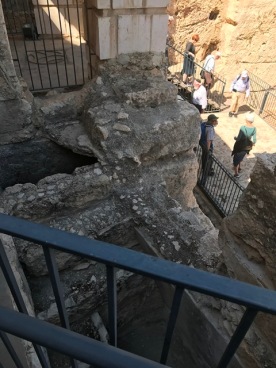 On our climb back to the top we viewed Shaar Hulda – Hulda’s Gate, a triple arched gate whose outline you can just make out in the wall.

We were disappointed that we had to then leave Jerusalem in a rush, before having time to pray at the Kotel, because the roads were beginning to close ahead of Trump’s arrival.

But please G-d, next time. Meanwhile, happy Yom Yerushalayim! Chag Same’ach to Jerusalem, to Judea and Samaria who were also liberated in ’67, and to all of Israel. Without our victory in 1967 we wouldn’t be here now.

4 Responses to #Jerusalem50: Har Hatzofim (Mt. Scopus) and the Ophel