First, a quick recap of previous days events, showing how one event led to the next:

Instead of calming the issue, the Jordanians escalated.  Rather than allowing the injured Israeli to return home, as required by all international diplomatic conventions, they surrounded the embassy, effectively holding all the diplomatic personnel hostage, and insisted the guard be handed over for interrogation. Israel refused and a stalemate ensued. Adding fuel to the fire, Jordan also threatened to arrest Israeli pilgrims to the grave of Aaron the High Priest if they so much as dared to pray or bring religious articles with them. Earlier Jordan’s parliament had also praised the terrorists who killed the policemen on the Temple Mount.

Rather than showing some courage, with Israel making threats of its own, e.g. withholding water supplies, or withholding security cooperation with Jordan which is the only thing keeping King Abdullah alive, Israel folded in the most humiliating manner. 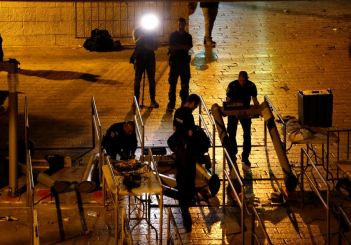 Israel removes metal detectors from the entrances to the Temple Mount

In exchange for the release of the Israeli security guard in Amman (i.e. a hostage) Binyamin Netanyahu agreed to remove the metal detectors outside the Temple Mount. Yes, the removal was covered by all kinds of “security talk”, saying they were not that effective, and that security cameras with face recognition would be installed instead. But that does not change the fact that this move was a humiliation, an act of dhimmitude in the face of extreme Muslim demands.

A statement issued after the forum of senior ministers concluded their meeting said they had decided to act on the recommendation of the security bodies and replace the metal detectors with “smart checking” means.

Until the new measures are put in place, police presence at the site will be enhanced in order to ensure security for the worshipers and visitors to the site.

The removal of the metal detectors was received with mixed emotions in the Israeli political arena. Culture Minister Miri Regev, a member of Netanyahu’s Likud party, said she was saddened by the decision. “The Cabinet’s decision form yesterday is upsetting. You don’t have to be a security expert to understand that the metal detectors have a security and deterrence effect,” Regev said.

Deputy Foreign Minister Tzipi Hotovely also spoke out against the decision, saying she didn’t understand it and that it was misguided. In an interview with Israel Public Radio, the Likud MK said “placing the metal detectors was a legitimate action. When what you want to do ignite the region, any excuse works.”

Read Arlene Kushner’s take on the whole crisis. She is worth reading in full, here is only  a small excerpt:

Bad enough that NO ONE stood up for Israel, saying that the Muslim Arabs were severely over-reacting and that Israel had every right to institute security measures after guns had been stored on the Mount.  That the Temple Mount was open and available for visitation and Muslim prayer – so what was their problem?   NO ONE pointed out that preventing terrorists from using their mosque to store weapons should be part of the Muslim agenda too.

NO ONE, including President Trump.

Bad enough that Trump sent his envoy Jason Greenblatt here yesterday to “reduce tensions.”  Greenblatt first held a meeting with Prime Minister Netanyahu and US Ambassador David Friedman, and then hopped over to Jordan for a chat with King Abdullah.

Arlene Kushner excoriates Jordan for their violation of diplomatic conventions and continues:

A statement released by the prime minister’s office very late last night said that the resolution of the crisis was possible because of talks held between Israel and Jordan “in a cooperative atmosphere.” (Jerusalem Post)

The story is not at an end, however.

With the dismantlement of the detectors also came removal of the cameras that had just been put up days before.  They were “too invasive” for the Muslim rioters.  Originally the Security Cabinet had envisioned that while replacements for the detectors (about which more following) were being considered, there would at least be the cameras.

But this will not be the case.

Yet even so, the Arab leaders and the Waqf are not recommending that people go up to the Mount yet. They want to “inspect” the situation first.

Slated to replace the metal detectors are less visible hi-tech cameras that have the capacity to detect explosives and weapons. They also have a face-recognition facility.  In the end, they are a more sophisticated and more effective solution.

There are problems, however: The cost is in the neighborhood of 100 million shekels, and it will take months to secure this equipment and place it.

And so, we have the open question of what happens between now and the time when that new equipment can be put in place.

And then, what the PA and the Waqf will say about the equipment.

We already have a pretty good idea:

The Waqf has said that its position is “to reject outright any changes, including technological measures….the gates of the mosque should be opened to Muslim worshippers in a completely free manner…” (Emphasis added)

It is not only the political classes that opposed this craven move. The average Israeli is upset, not to say furious (as I was) at this unwarranted humiliation:

The majority of Israelis think the removal of the metal detectors at the entrance to the Temple Mount constitutes a capitulation by the Israeli government, according to a Channel 2 News poll published on Tuesday.

Seventy-seven percent of participants responded “yes” to the question whether the removal of metal detectors constituted capitulation, while 17 percent said “no” and six percent said they didn’t know.

So one would think that now that the metal detectors and security cameras have all been removed, all will now be well between Israel and the Muslim world, yes?

Absolutely not! The Muslims (it is not only the Palestinians any more) are insisting that EVERYTHING be returned to the status quo ante:

Ikrema Sabri, a senior Muslim cleric, said Tuesday that Muslims should stay away from the shrine, pending a review of the new Israeli measures. The review could be complete by the end of the day, he said.

“Our position is that for now, nobody should enter,” he told The Associated Press.

Wouldn’t it be nice if the status quo ante could be restored and the two Israeli policemen and the Salomon family be brought back to life?

The writer mocks the Left for blaming Netanyahu and his moves for the present crisis, but while he holds a large measure of fault, I think the fault lies mainly with the Arabs (which includes the Palestinians) so I am going to “mistranslate” the photo, replacing the word “Left” with the word “Arabs”:

Somehow, despite rigid laws of physics, Arab claims can turn back time:

Adding insult to injury, our “peace partner” Mahmoud Abbas is calling to intensify the struggle over the Temple Mount:

alestinian Authority President Mahmoud Abbas’s Fatah faction has called for Muslims to “intensify the popular struggle” over the Temple Mount, despite the removal of metal detectors and security cameras from the holy site after a week of protests over the increased security measures.

In its Wednesday decision, the Fatah Central Committee said that it would continue protests over the security measures and called for this week’s Friday prayers to again take place outside of the compound. Last Friday saw violent protests in several Jerusalem locations at the end of prayers. 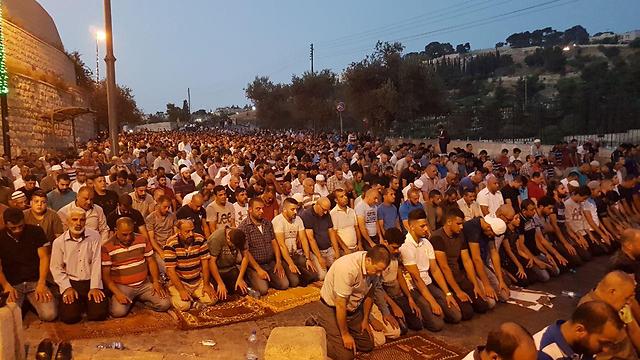 Muslims pray outside the Temple Mount on Tuesday evening

“All the new Israeli measures on the ground from that date to the present are supposed to disappear,” he said. “Then things will return to normal in Jerusalem and we will continue our work after that in relation to bilateral relations between us and them.”

After Tuesday evening prayers, violence once again broke out in East Jerusalem, with rocks thrown at police officers, who responded with tear gas and other “non-lethal crowd disposal methods,” police said in a statement.

Melanie Phillips cuts to the chase of the whole saga, in her inimitable succinct manner, defining the whole conflict as a religious war, one which Israels’ leaders prefer to deny exists, in which they act as if it is only a nationalistic war (emphases are mine):

In any event, the problem is not at root the terrorist violence around Temple Mount, nor is its solution the metal detectors. The problem is the charade of Temple Mount itself: the fact that Jordan, which has no legitimate title on Temple Mount whatsoever, is allowed not only to administer it but to prevent Jews from free access to Judaism’s own holy of holies.

This ridiculous and unjust status quo has been allowed to continue for one reason only: fear that the Muslim world will ignite if it is altered in any way. This was first displayed 50 years ago by Moshe Dayan, the general who liberated Temple Mount from its illegal Jordanian occupiers – only to hand its administration back to Jordan for fear of Islamic holy war.

Temple Mount is a symbol therefore of the enduring timidity of Israel and its consequent belief that it can only ever seek to manage, make deals with and calm down its mortal enemies rather than defeat them. It is also a symbol of Israel’s refusal to acknowledge that the violence against it is not the result of a land boundary dispute, nor a clash of rival nationalisms. It is, far more terrifyingly, the product of Islamic holy war.

It is surely about time that we Israelis too call for a day of rage:

Today Fatah and other Islamic leaders called for a “Day of Rage” due to the installation of metal detectors on the Temple Mount after a terrorist attack in which an Arab terrorist killed two Israeli policemen. This “day of rage” comes despite the fact that Muslims are free to worship today as usual at the Temple Mount.

We too call for a day of rage – rage against terror, incitement, and Palestinian corruption that continues to prevent the Palestinian people from achieving peace.

If we don’t stand up for ourselves, for our principles, our religion, our nationality, our holy sites, and – yes – our pride, no one else will. The Arab can smell our weakness and exploit it mercilessly. If our leaders feel they cannot withstand Arab or international pressure then maybe it’s time we replaced our leaders.