It’s been an exciting week for our family but you will have to wait till Motzaei Shabbat (Saturday night) to hear all about it. Meanwhile you will have to make do with another Good News Friday installment.

First we have a beautiful and inspiring project run by Israel’s Ministry for Diaspora Affairs (h/t Hadassah), which aims to bring Jewish mothers from the Diaspora to experience Israel on a similar basis to the famed Birthright tours. The hope is that this visit to Israel will strengthen these women’s Jewish roots and inspire them to pass on their experiences and warm feelings for Israel to their children and pupils. Watch the video:

What a wonderful idea! Kol hakavod to the Ministry and to all the participants of this trip. May you be inspired and inspire others on your return.

Speaking of education, the British Library has published its treasure trove of Hebrew manuscripts (via Reality): 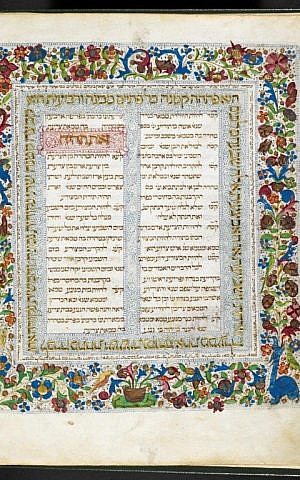 The new site is the library’s first bilingual online collection, allowing users to search for scans of the manuscripts in Hebrew and English.

“The British Library holds one of the world’s greatest collections of Hebrew manuscripts,” said Ilana Tahan, lead curator of the library’s Hebrew and Christian Orient Collections.

“Digitizing and making these beautiful and very important items available online is a huge step forward in opening them up to international scholars and a wider public audience. We hope that, by providing access to the articles and collection highlights in Hebrew as well as English, we will make them accessible to even more people, allowing them to learn more about our incredible collection of Hebrew manuscripts.”

The London-based library has been digitizing its collection of its approximately 3,000 Hebrew manuscripts, which dates back to the library’s establishment in the 18th century, since 2013. So far, about half are available for online viewing on the website, Tahan told The Times of Israel on Monday.

In addition to scans of the original manuscripts, the Polonsky Foundation Catalogue of Digitised Hebrew Manuscripts also includes several scholarly articles related to the documents, dealing with manuscript art, Jewish liturgy, digital research, Kabbalah and mysticism and other topics. The articles were commissioned and authored especially for this project.

What an amazing project and what a treasure trove for students and scholars of Jewish and Hebrew literature. Kol hakavod to the British Library on this huge project and making it available to the public.

And now a leap forward into the 21st century and beyond, as Israel prepares to join the space race, or as the blurb on the video below says:

Space: the final frontier for Israeli scientists. 21see meets the minds behind SpaceIL – Israel’s answer to Google’s Lunar X challenge. Join 21see as we hear from the remarkable group of scientists hoping to make Israel the fourth nation to land on the moon.

Watch this exciting and amusing video and be inspired by Israel’s prowess in the space sciences:

This is fantastic! I had no idea Israel was so advanced in the race to the moon. May the best team win! (And I hope it’s the Israeli team!). בהצלחה!

And one final item before Shabbat.  Here is a bittersweet video by the pro-Israel advocacy group “Boomerang”, in which activist Ezri Tubi talks to an Arab nargilah seller – and together they solve the problems of Middle East peace:

If only the simple people on the ground, the man in the street with no interest in fighting, but who only wants to make a living and support his family, could make his views influence the politicians, what a paradise we could have here!

And on that thought provoking note I wish you all Shabbat Shalom!