Trump to announce recognition of Jerusalem as Israel’s capital

Posted on 6 December 2017 by anneinpt 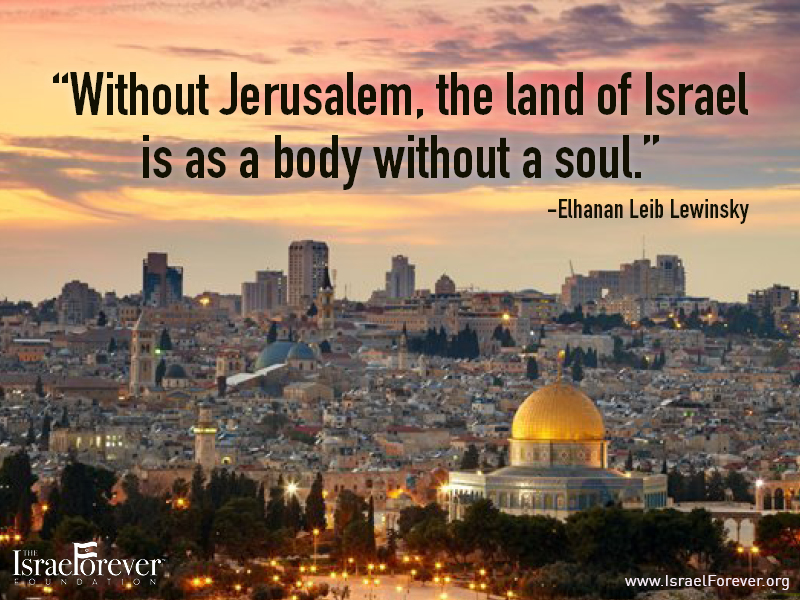 After holding our collective breath over the last couple of days, it emerged – without much fanfare from the American side – that Donald Trump has not quite refused to sign the waiver permitting the US to retain its embassy in Tel Aviv (the whole issue is terribly vague. Maybe the waters are being muddied on purpose) but he is going to make an announcement recognizing Jerusalem as Israel’s capital. Plus, he will be instructing the State Department to examine the practicalities of moving the US Embassy to Jerusalem.

WASHINGTON — US President Donald Trump will announce in a speech on Wednesday that he is formally recognizing Jerusalem as Israel’s capital, while asking the State Department to formulate a plan for moving the US embassy there from Tel Aviv, White House officials confirmed Tuesday evening.

The recognition of Jerusalem, widely expected to anger the Arab world and cast a shadow over US-led peace efforts, will also be accompanied by Trump committing to support a two-state solution should both Israel and the Palestinians back it, the officials said, in a likely bid by the administration to balance the announcement seen as heavily favoring Israel. 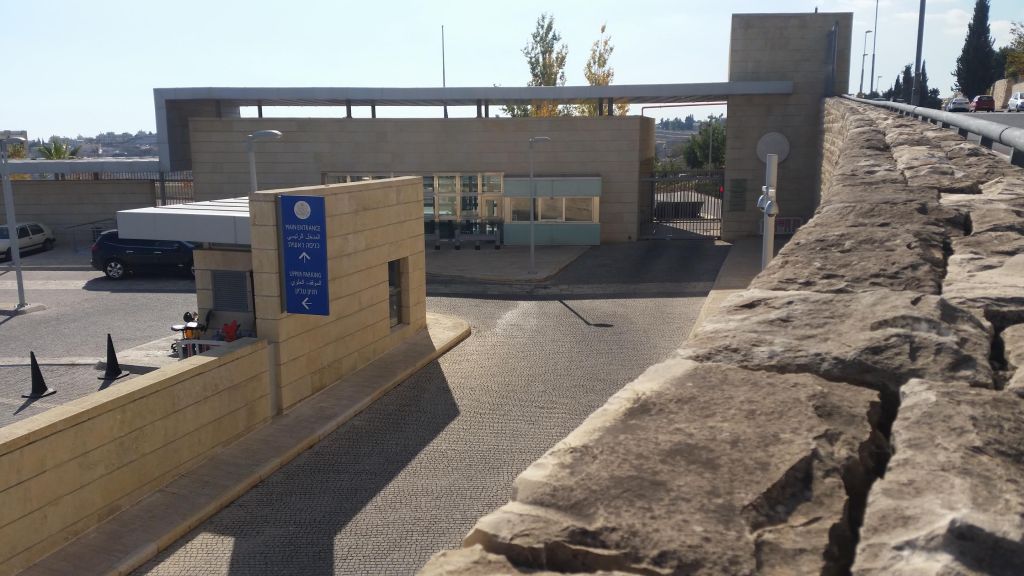 The US Consulate in Jerusalem’s Talpiot neighborhood, adjoining a possible site for the US Embassy (Raphael Ahren/Times of Israel)

Trump’s administration is certainly a reality-based one, as opposed to the Obama administration which was based on wishful thinking at best, and on an anti-Israel bias at worst:

The White House repeatedly referred to the recognition and embassy move, which will likely take years, as “acknowledging a reality,” noting the city’s role as the seat of Israel’s government but disregarding Palestinian claims there.

“He views this as a recognition of reality, both historic reality and modern reality,” one official said.

“While President Trump recognizes that the status of Jerusalem is a highly sensitive issue, he does not think it will be resolved by ignoring the truth that Jerusalem is home to Israel’s legislature, it’s Supreme Court, the Prime Minister’s residence, and as such, it is the capital of Israel,” one of the officials said.

The US now officially recognizes Jerusalem as Israel’s capital – and the world has gone into meltdown.

US officials warned Trump not to recognize Jerusalem as Israel’s capital. The reason is less ideological, more capitulation to threats of violence from the Arabs:

If Trump made such a move, it could spark demonstrations or violence by Palestinians or by Muslims around the world, in part because of the sensitivity of the Jerusalem site known to Jews as the Temple Mount and to Muslims as Haram al-Sharif.

The site includes the al Aqsa Mosque, the third-holiest site in Islam, and the golden Dome of the Rock. It was also the site of an ancient Jewish temple, the holiest place in Judaism.

The Arab threats of mayhem and violence (as any good mafiosi would do) came thick and fast, with clashes expected in Judea and Samaria after Friday prayers – or incitement – in the mosques.

Vicious incitement and antisemitism from the PLO never stops https://t.co/oYI0M4R8uy

But best of all was Turkey’s threat to cut ties with Jerusalem (or was that a promise?):

ANKARA – President Tayyip Erdogan said on Tuesday Turkey could go as far as breaking off diplomatic ties with Israel if the United States formally recognizes Jerusalem as Israel’s capital, a move he said would be a “red line” for Muslims.

Erdogan is the latest in a string of regional leaders, including Palestinian Authority President Mahmoud Abbas and Jordan’s King Hussein to warn of negative implications of the move.

“Unfortunately, Erdogan does not miss an opportunity to attack Israel. Israel must advance its goals, including the recognition of United Jerusalem as the Capital of the State of Israel,” Bennett said in a statement. “There will always be those who criticize, but at the end of the day it is better to have a united Jerusalem than Erdogan’s sympathy.”

Transportation and Intelligence Minister Yisrael Katz said that Israel “does not take directives or threats from Turkey.”

Israel is a “sovereign state, and Jerusalem is its capital,” Katz said. “There is nothing more historically just or right than to recognize Jerusalem, which has been the capital of the Jewish people for 3,000 years, as the capital of the State of Israel. The days of the Sultan and the Ottoman Empire are over.”

If @realDonaldTrump moves the embassy AND Turkey cuts diplomatic relations with Israel, can't we call that a win-win?@EVKontorovich

The Europeans, in their own weaselly way, also warned against American recognition of Jerusalem as Israel’s capital:

BRUSSELS (Reuters) – The European Union’s top diplomat, Federica Mogherini, said on Tuesday that “any action that would undermine” peace efforts to create two separate states for the Israelis and the Palestinians “must absolutely be avoided”.

Had the shoe been on the other foot the EU would have supported it willingly, as they do all the vile anti-Israel UN insults and attacks labelled "resolutions"https://t.co/f36d9M4vSu

Palestinian President-for-life Mahmoud Abbas is leading the Arab charge against recognition of Jerusalem as Israel’s capital:

Trump is expected on Wednesday to declare US recognition of Jerusalem as Israel’s capital and to order the start of work to move the embassy from Tel Aviv to Jerusalem, White House officials confirmed Tuesday.  US recognition of Jerusalem as Israel’s capital is legitimate, almost banal; the same goes for moving the embassy there. But the warnings coming from even moderate Arab states show how sensitive the Jerusalem issue is and how problematic it can be to deal with even for them.

While the embassy move is expected to take months if not years, merely the prospect of it, as well as the recognition of Jerusalem, have inspired a blizzard of warnings of possible violence in the West Bank and elsewhere.

In a series of phone calls Tuesday, Trump made clear to Arab leaders his plans to move the embassy and recognize the city as Israel’s capital. He spoke about it with Palestinian Authority President Mahmoud Abbas, Jordan’s King Abdullah, Egypt’s Abdel-Fattah el-Sissi and Saudi King Salman. The leaders of all of the Sunni Arab states considered to be “moderate,” even those that have covert security ties with Israel, warned of the grave consequences of the move and of an escalation in violence because of the disregard for Muslim sensitivities around the world.

King Mohammed VI of Morocco, the Arab League, and the top Islamic body al-Azhar also all emphasized that moving the embassy could have serious consequences.

Leading the chorus, rather than being led this time, is Abbas. He has spoken in recent days with every Arab and European leader he could and warned them that an action like this could lead to violence on the ground.

Should there be an actual increase in violence, it won’t stem from attacks by “lone wolves” or smaller Palestinian factions; rather, the descent into chaos will have been orchestrated from above, by the chairman himself, just like in the bad old days of Yasser Arafat.

Last July, amid the crisis over metal detectors at the Temple Mount, he made the unprecedented move of freezing security coordination with Israel, and now he is practically ordering his men to escalate violence. His Fatah faction published on Tuesday an official announcement calling for “days of rage” on Wednesday, Thursday and Friday, and for mass protests.

The thing is, the Palestinians are always threatening violence no matter what Israel does. And even when Israel capitulates, there is still violence and another pretext will be spun out of thin air to justify it. It’s way beyond high time that Jerusalem received the recognition it deserves. We are lucky that Donald Trump is so politically incorrect that he doesn’t pay any attention to all the nay-sayers.

But in the end, does any of this matter in the end? Will anything change on the ground for Israel and Jerusalem? (Besides the expected Palestinian violence of course).

Kay Wilson wrote an excellent post on Facebook, succinctly summarising the issue. I wish I wrote this myself:

Just like the UN acknowledged the right of the Jewish people to have a nation state in 1947, it will also be amazing if President Trump decides to recognize Jerusalem as the capital.

However, just like our own personal identity and self-worth can never be found in what other people think of us, or who they think we are, so it is with the people in power concerning Israel. Their decisions have no bearing on the fact that Jerusalem is the eternal capital of the Jewish nation State. None whatsoever.

And should anyone doubt: in addition to the land, we have centuries of history, the only language ever to have been revived, 1000’s of archaeological artifacts of numerous Biblical remains, and ancient texts stretching back millennia.

Times of Israel reporter Haviv Rettig Gur also sums up the issue in an eloquent nutshell:

And this, ladies and gentlemen, is how this all looks to Israelis. It's not about whether some western capital recognizes our capital. It's about the world continuing to validate Palestinian rejection of the legitimacy of our existence. https://t.co/iCeJHZzZ28

Here is a series of tweets demonstrating the absurdity of the situation until now, and the implications of American recognition of Jerusalem as Israel’s capital:

The Palestinian point of view. This is why there is no peace. https://t.co/xaObp4NCsm

Whether it's 'tel Aviv' or Jerusalem, both are Palestinian lands. pic.twitter.com/M9lyxqPDqv

Read it with both eyes open. Jerusalem is still Israel's capital, Arabs still try to destroy the country, waiver or no waiver. https://t.co/07YH82zqOa

Any truly serious peace agreement requires recognition of the Jewish state & its historical capital of #Jerusalem.
If that doesn't suit the Arabs after 70 years, forget about any peace process.

Although this past year Israel celebrated 50 years since the reunification of #Jerusalem, the Jewish people’s historic, legal and inextricable bond to this holy city – which has been the capital of the Jewish people and only the Jewish people – extends well over 3,000 years! pic.twitter.com/vg0l6e3CEL

Here is a witty but true observation about the Muslims’ attitude towards Jerusalem:

Man if the Palestinians are angry that the US might acknowledge Jerusalem as Israel's capital, wait till they find out which direction Jews pray to

Palestinian Officials calling for days of outrage. Previous days of rage included stabbings, bombings, and molotov cocktails. This is what they are promoting and its right out here in the open for all to see. https://t.co/MZ1uO8Uy6N

Moving the #American #embassy to #Israel´s #capital #Jerusalem carries the risk of making those who draw #Nazi #cartoons (i.e. #Nazis ) really #angry. Then again, their defeat in #WWII made them angry, too. https://t.co/84gSuaNzYk

Arabs: Declaring #Jerusalem the capital could end the peace process.
Translation: Do what we say otherwise we will murder innocent people.

Let’s finish off on a positive note: 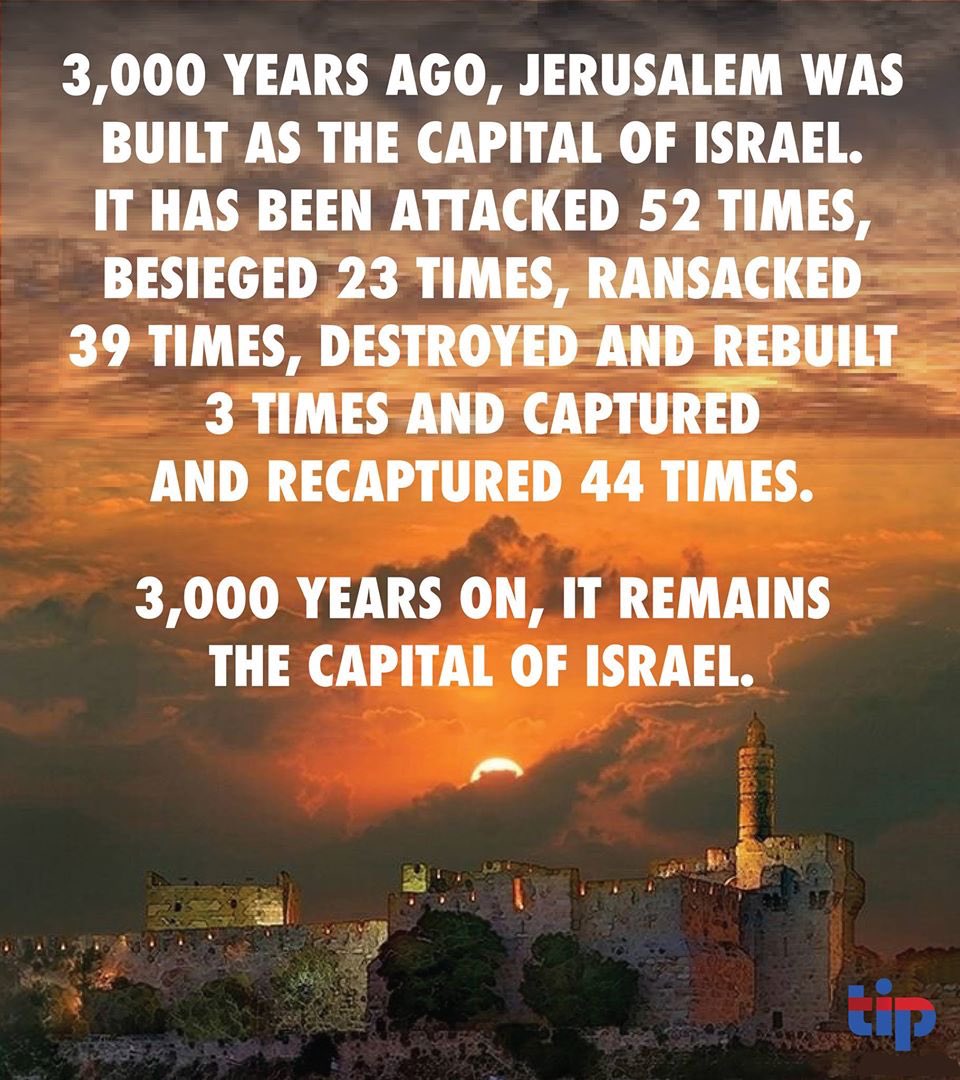