Earlier this week the American Vice President Mike Pence and his wife arrived in Israel on an official two-day visit, and it was a roaring success. 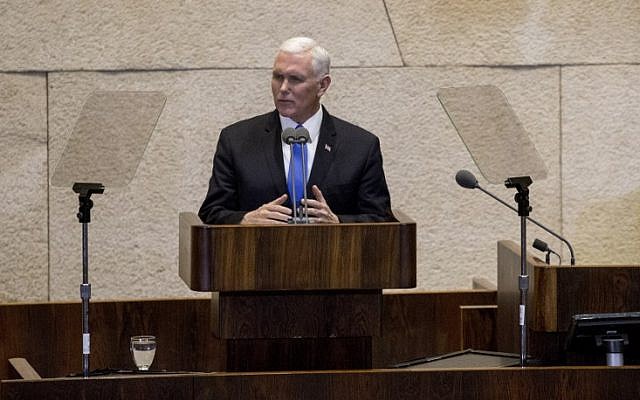 I will take the liberty of quoting from the wonderful journalist and commentator Arlene Kushner who wrote about the visit:

The vice president arrived here in Israel Sunday evening, for a two-day visit. In his press conference with Prime Minister Netanyahu yesterday, he related the fact that every time he and his wife travel to the Holy Land, they leave with “a reinvigorated faith in God…and the Jewish people.” 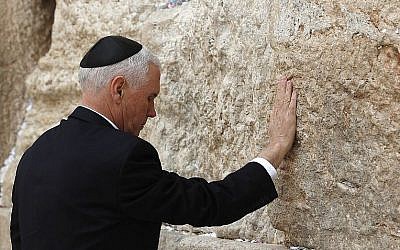 Mike Pence at the Kotel

On Monday, Pence became the first US vice president ever to address the Knesset.  His words were most welcome, starting with the fact that he said he was so glad to be in “Jerusalem, the capital of Israel.”

With regard to this, he announced that the US embassy would be located in Jerusalem before the end of 2019.
****
This is very welcome news.  The timing makes it clear that he is referring to plans to refurbish an existing facility and not build a new one from the ground up – at least as an interim step, if not permanently.

The tension inherent in deciding between building a new facility – which could take up to 10 years – and refitting an existing one has been evident for some days.  While in India, Netanyahu said he had information that the US would have an embassy in Jerusalem in about a year, to which Trump responded, no, it was going to take much longer than that.  Turns out that Netanyahu’s information was correct.

Serious speculation has it that the Diplomat Hotel in Talpiot, not far from the US Consulate, will be refitted as embassy.

But far more important than this was what Pence had to say about Iran:  The US will never allow Iran to acquire a nuclear weapon.

The Iran deal, he declared, is a disaster.  The president has waived sanctions for the last time:  Unless the deal is fixed, the US will withdraw.

The US, explained Pence, is concerned about Iran’s development of ballistic missiles and its massive involvement in promoting terrorism, as well its clandestine nuclear development.

Sounds as if the Trump administration has got it right!

You can see the vice president’s full remarks at the Knesset here:

Mike Pence’s speech was rife with Biblical references and it “rocked the Knesset”:

A devout Evangelical Christian, Pence paraphrased Psalms: “The USA is proud to stand with Israel and her people, as allies and cherished friends. And so we will pray for the peace of Jerusalem, that those who love you be secure, that there be peace within your walls and security in your citadels. And we will work and strive for that brighter future, so everyone who calls this ancient land home shall sit under their vine and fig tree, and none shall make them afraid.”

During his speech, Pence waxed poetic about Israel and Jewish history.

“As I stand in Abraham’s Promised Land, I believe that all who cherish freedom and seek a brighter future should cast their eyes here and marvel at what they behold…How unlikely is Israel’s birth; how more unlikely is her survival,” he said.

Pence said the Jewish people held on to the hope of returning to their homeland over a 2,000 year exile, “through the darkest and longest nights.”

“Tomorrow, when I stand with my wife Karen at Yad Vashem to honor the six million Jewish martyrs of the Holocaust, we will marvel at the faith and resilience of your people, who just three years after walking in the shadow of death, rose up from the ashes to resurrect yourselves, to reclaim a Jewish future and rebuild the Jewish State.”

Pence’s blessing was met with a standing ovation from nearly all of the MKs present, as were several other points in his speech. 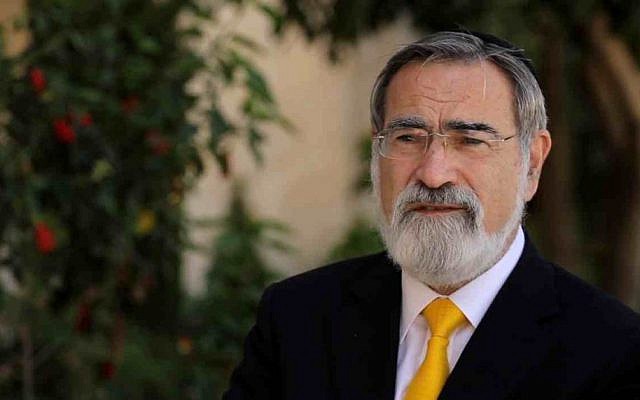 Officials said Sacks, who retains the title of emeritus chief rabbi and is an active speaker and writer, played a major role in the drafting of the speech, which was laden with both statements of policy and biblical references.

“Rabbi Sacks was an instrumental part of crafting the vice president’s speech,” a source with knowledge of the speech-writing process said. “Rabbi Sacks provided input and editorial suggestions on various drafts throughout the writing process.”

Sacks, who spent 22 years as chief rabbi of the United Kingdom, has authored 25 books, most recently “Not in God’s Name: Confronting Religious Violence.” An ardent proponent of interfaith cooperation, Sacks has advised several British prime ministers, including John Major and David Cameron. Since retiring as British chief rabbi in 2013, he has taught at American and British universities.

The vice president, for example, said that “it was the faith of the Jewish people that gathered the scattered fragments of a people and made them whole again; that took the language of the Bible and the landscape of the Psalms and made them live again.”

Unfortunately, Pence’s speech was not welcomed in certain Arab quarters. The outrageous display put on by Arab Members of the Knesset as Pence started speaking was both incredibly ill-mannered and a blatant disregard of the Knesset rules. Arlene Kushner continues:

As Pence was about to begin speaking, Arab MKs from the Joint List, who had originally said they would boycott the speech, rudely and inappropriately began a loud protest.  They were immediately hustled from the plenum by security personnel, to much applause.

Pence handled the situation with enormous aplomb, coolly commenting that it was humbling to speak before such a “vibrant democracy.”

What we need to note is that last night Pence said he had come to Israel “simply to celebrate and affirm the bond between our two peoples.”  With President Trump in the White House, he predicted, “…the best days for our most cherished ally, Israel, are yet to come.”  Let it be!

Karen & I joined Prime Minister @Netanyahu to commemorate the innocent lives lost & lay a wreath at Yad Vashem earlier today. We mourn the 6 million Jewish victims of the Holocaust & we draw inspiration from the faith & resilience of the Jewish people. Never again. #VPinIsrael pic.twitter.com/cqdnaBjapu

****
Before coming to Israel, Pence met first with Egyptian President Abdel Fattah al-Sisi, in Cairo, and then with Jordanian King Abdullah II, in Amman.  This was important for wider diplomatic reasons, particularly with regard to cooperation on issues such as terrorism and Iran.

Each leader, in turn, emphasized the importance of a “two-state solution” with eastern Jerusalem as the capital of a Palestinian state.  Pence’s unapologetic position was that this was a disagreement among friends.

What he did say to them, however and reiterated here in Israel, is that the Trump administration has not ruled out “two states” if both parties agree, has not defined the final borders of Jerusalem, and has called for maintenance of the status quo.

There remains, and I think perhaps there must be at this point, a certain diplomatic political correctness exhibited by the US that is difficult for us – in particular with regard to Jordanian Wakf control of the Temple Mount and insistence that Jews not pray there. But how far we have come.
****
The Palestinian Authority, as Abbas had predicted, refused to have any contact with the vice president.

Pence made an appeal to them, saying he hoped they would change their minds because peace can only come via dialogue.

Again, it is obvious that he must say this, and I have to think that he doesn’t really believe they will respond to his appeal. But always, I wonder about unrealistic expectations.  That he says this to show Al-Sisi and Abdullah that he’s trying is one thing, that he imagines Abbas might moderate is quite another.
****

What Abbas did instead was attempt a diplomatic end-run around the US. This is his MO, anything but sincere negotiations:

On the day that Pence addressed the Knesset, he went to Brussels to meet with European High Representative for Foreign Affairs Federica Mogherini.  His request was that the EU recognize a Palestinian state within ’67 borders (sic).

Is there anyone—anyone!—who takes this breath-taking liar at his word? Do the ministers of the EU states simply grit their teeth and nod?
****
“You’re the main partner in building a Palestinian state,” Abbas told Mogherini.  What he was seeking, of course, was a replacement for the US as negotiator.

Arlene explains that while the Europeans have agreed to step up to replace the funding to UNRWA cut by the US, this does not in fact help create a Palestinian state. On the contrary, as I have explained many times, UNRWA keeps the Palestinians in a state of refugee-ship – not exactly a building block for an independent state. Until they wean themselves (or are weaned off) the idea that they are refugees within their own country they will never be capable or willing to build and independent state.

Meanwhile thank goodness we have newly rewarmed ties with the United States under the unlikely leadership of Donald Trump and the very able and admirable Vice President Pence.