The destruction of Jerusalem which began on 17th Tammuz

The fast day of Shiva Asar b’Tammuz – 17th Tammuz – technically fell yesterday, but since it was Shabbat on which mourning is not allowed, the fast was put off until today.  The fast commemorates the following tragic events which led up to the destruction of Jerusalem and the Temples on the 9th Av (in 3 weeks time):

1. Moses smashed the Ten Commandments when he found the Jews worshiping the Golden Calf.
2. The daily sacrifices ceased during the First Temple due to a shortage of sacrificial animals.
3. The walls of Jerusalem were breached leading to the destruction of the First (actually occurred on the 9th of Tammuz) and Second Temples.
4. An idol was placed in the Temple during the First Temple era.
5. Apustamos (a Roman general) publicly burned a Torah scroll.

One could ask why we still need to fast if we have today the State of Israel, with Jewish sovereignty, the flourishing of Torah-learning centers throughout Israel, the ingathering of the Exile well under way, and our own army.  Surely the Geula, the Redemption of the Jewish People, is on its way?

The answer, as Rabbi Dr. Raymond Apple (emeritus Rabbi of the Great Synagogue, Sydney) explains, is that we still do not have the Temple, and without that, the Redemption is not complete.

Zechariah said (8:18-19) that these fasts would eventually turn into occasions of joy. He said that in an age of peace and penitence, the fasts would no longer be necessary.

Most rabbinic authorities interpret “peace” in this context as having a rebuilt Temple.

Rashi has a different view, that “peace” means that “the hand of the gentiles is not strong against Israel”, but most authorities are against him.

This certainly means that Tishah B’Av should be maintained, and rabbinic thinking is not ready to rule that the other three fasts can be allowed to lapse.

In an interesting turn of events, as so often happens in Israel, archeologists recently uncovered a coin from the era of the Jewish Revolt which shows that the rebels were aware of the impending disaster:

A rare bronze coin from the fourth year of the Great Jewish Revolt was recently discovered in excavations in the City of David National Park. A testament to the final days of the rebellion against the Romans, the coin was minted shortly before the destruction of the Second Temple in 70 CE. 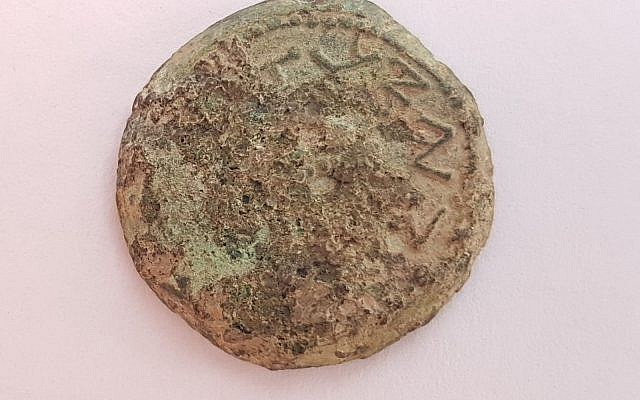 A rare bronze Year Four coin, minted in 69-70 CE during the Great Jewish Revolt, inscribed with ‘For the Redemption of Zion,’ was discovered in wet sifting of material from the City of David, June 2018. (Ilan Shilmaiv/City of David)

Symbolically, the coin was rediscovered on the eve of the 17th of Tammuz, the commencement of the three weeks commemorating the conquest of the Romans of Jerusalem and the Temple’s destruction. The three-week mourning period culminates on Tish B’av, considered the saddest day of the Jewish calendar.

In the first few years of the rebellion which lasted from 66-70 CE, coins inscribed in First Temple paleo-Hebrew lettering sounded the battle cry, “For the Freedom of Zion.” Illustrating the rebels’ waning confidence, Year Four coins (69-70 CE) are inscribed with the words, “For the Redemption of Zion.”

“The difference between ‘freedom’ and ‘redemption’ expresses the change occurring in the rebels’ subconscious, and the reality of those days,” said Israel Antiquities Authority archaeologist Eli Shukron, who is leading the City of David excavation.

Year Four coins are also decorated with Jewish symbols. In the case of this coin, the four plant species associated with the pilgrim holiday of Sukkot — palm, myrtle, citron and willow. Others depict a chalice that may have been used by priests in the temple. 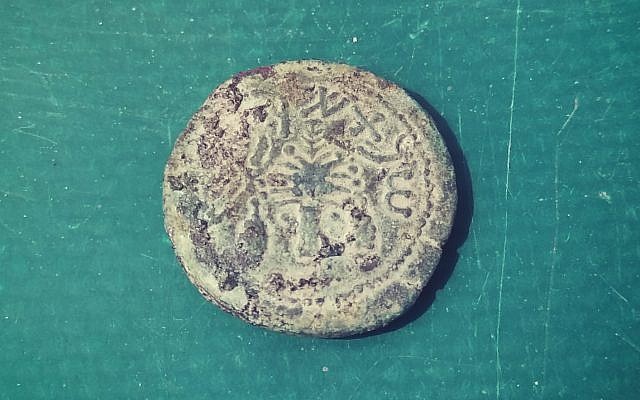 A rare bronze Year Four coin, minted in 69-70 CE during the Great Jewish Revolt, and depicting the Four Species, discovered in wet sifting of material from the City of David, June 2018. (Ilan Shilmaiv/City of David)

The coin was discovered during the recent systematic inspection of a bucket of dirt taken from a 600-meter drainage ditch which runs under Rehov Hagai, the main road for pilgrims ascending to the Second Temple.

The ditch, uncovered in 2007, is the largest in the underground system. It is currently part of the City of David National Park and runs from the Robinson’s Arch archaeological garden, under the Ophel excavations, to an area just north of the Silwan Pool, next to the valley.

According to the writings of Yosef Ben Matityahu, the Jewish historian Flavius Josephus, some 2,000 rebels were killed by Romans while hiding in drainage ditches. Archaeological finds back up Josephus’s claim: Whole cooking pots, coins, and even a Roman sword of the era have been uncovered in the system of underground drainage ditches.

Shukron suspects rebels hid in this drainage ditch in the last days prior to the fall of the city to the Romans.

“It’s possible that this coin, which was placed in the pocket of a Jerusalemite hiding from the Romans in underground warrens,” said Shukron, “or maybe it rolled into the drainage ditch while the coin’s owner walked the streets of Jerusalem 2,000 years ago.”

Until today, most discovered Jewish Revolt coins are dated to Year Two. “The small amount of coins minted in the third year, and almost a complete lack of coins from the fourth year, indicates that most of the country was re-conquered by the Roman army fairly soon after the beginning of the revolt,” writes Robert Deutsch in his 2017 “The Coinage of the First Jewish Revolt against Rome, 66-73 C.E.”

According to Deutsch, the bronze coins of the second and third years “are abundant and negligently manufactured.” The fourth year coins, however, “are of a slightly higher quality.”

What a fascinating discovery and what perfect timing! It connects us from the modern day back almost 2,000 years to the time when we were struggling (and ultimately failed) to retain our sovereignty.

What a poignant reminder of the terrible Hurban (destruction) that befell the Jewish Nation, and which presaged a 2,000 year Exile consisting of slavery, expulsions, forced conversions and massacres.

Thank G-d we now have our own country back in the State of Israel. We must look after it at all cost, both physically and spiritually.

The lessons of the Great Revolt must be not be lost upon us.