While we were all enjoying the great outdoors or family visits during the (still ongoing) Sukkot festival, the leaders of the world have been gathering at the UN for the annual General Assembly opening.

Tonight Binyamin Netanyahu proved himself to be one of the world’s most accomplished statesmen, as he delivered yet another masterpiece. He covered every point of importance to Israel – the unfairness of the UN’s microscopic focus on Israel, the bias of its various institutions, particularly the Human Rights Council and UNRWA, while it ignores real human rights abuses in dozens of countries such as Pakistan, China, and more. He strongly refuted the accusations that Israel’s new Nation State Law is effectively racist even as he rejected the persistent epithet of apartheid against Israel, giving several examples to prove his point. He demanded that Hamas release the bodies of Hadar Goldin and Oron Shaul, 2 IDF soldiers who were killed in 2014 in Gaza, as well as releasing two Israeli civilians held hostage by Hamas, Avera Mengistu and Hisham al-Sayed.

Very importantly, Netanyahu thanked President Donald Trump and Ambassador Nikki Haley for their unwavering support of Israel at the UN.

But as expected, Netanyahu reserved the focus of his speech for Iran and its now not-so-secret nuclear weapons program. He surprised us all with evidence of another nuclear site, this time using a map as his “prop”, and accused the regime of smuggling out the radioactive material within it and hiding it in sites all around Tehran, thereby endangering its own citizens. 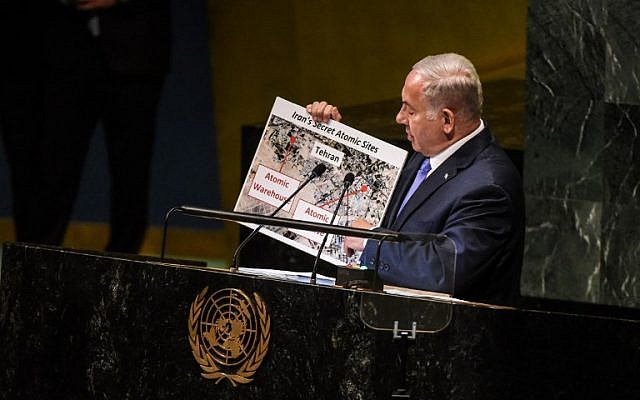 He concluded with a reminder that Israel is the Jewish homeland and there is nothing that should be controversial about that fact.

Sadly I don’t think a lot of the world agrees with him on that point, but I was pleasantly surprised by the number of ovations that Netanyahu received. I had imagined he would be met with a stony silence.

Watch his speech at the video below. It’s really worth the time.

The Times of Israel mentions that immediately following the Prime Minister’s speech, the IDF released a video with more information about Hezbollah missile sites, noting that their placement around Beirut jeopardizes Lebanese citizens, itself a war crime:

But who will remember these warnings when the next flare-up occurs and Israel will inevitably be blamed for enemy civilian casualties?

To read about Donald Trump’s speech and listen to it in full, go to this post at Legal Insurrection. It has great analysis and you can read the highlights if you don’t have the time to watch the whole speech.