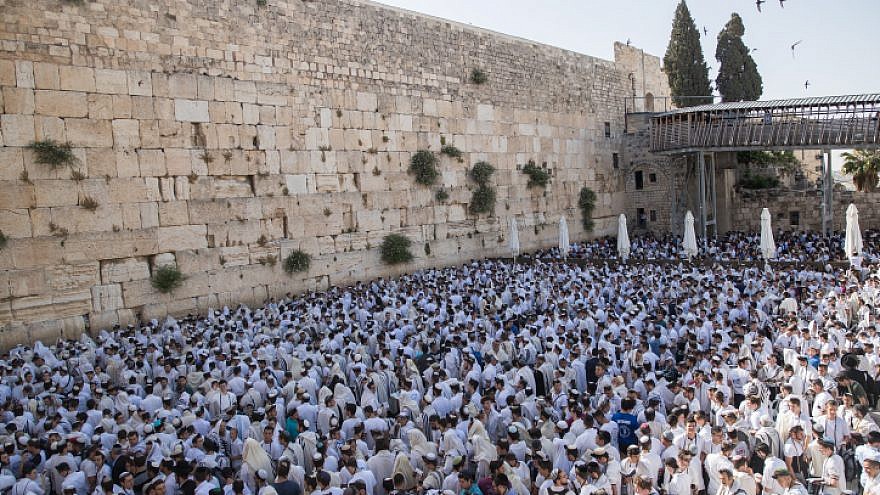 Prayers this morning at the Kotel for Yom Yerushalayim

Yom Yerushalayim, Jerusalem Day, the anniversary of Israel’s miraculous win over combined Arab forces in 1967, began last night (Saturday night) with festive prayer services in synagogues around the country. This year we mark the 52nd  anniversary of the reunification of Jerusalem, as well as the liberation of Judea, Samaria and the Golan Heights (and the Gaza Strip but that’s another story) in the Six Day War. The day is not a national holiday in Israel but it is marked with special ceremonies, prayers and celebrations in schools, municipalities, youth clubs, and of course throughout Jerusalem.

Unfortunately not everyone is happy about our celebrations – specifically the Palestinian population who have been whipped up into a nationalistic and religious fervor by their political and religious leaders, and see it as an affront to even entertain the thought of Jewish visitors on the Har Habyit – the Temple Mount, the holiest site in the world for the Jews.

This year, in a marked change from previous years, and despite many challenges, the Israel Police decided to open the Temple Mount to Jewish visitors today in honour of Yom Yerusahalyim, despite the day occurring in the final days of Ramadan, which is always a very volatile period in the calendar.

Clashes erupted between Palestinian rioters and police on Sunday morning at the Temple Mount compound in Jerusalem’s Old City, as hundreds of Jews were allowed into the holy site to celebrate Jerusalem Day — the 52nd anniversary of the unification of the capital in the Six Day War. 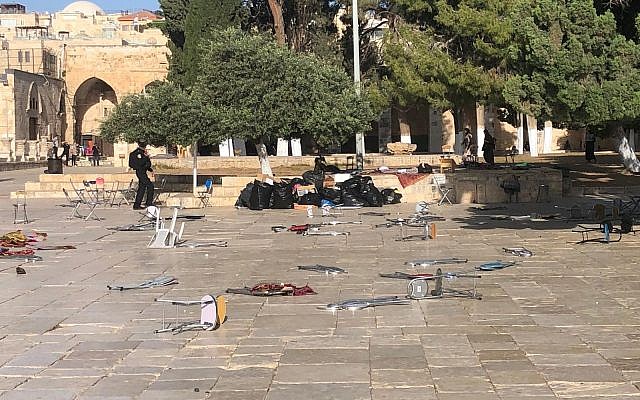 Chairs and other objects hurled at police forces by Palestinian rioters at Jerusalem’s Temple Mount compound on June 2, 2019. (Israel Police)

It was the first time in three decades that non-Muslims were let into the site during the final days of the month of Ramadan, which coincided this year with Jerusalem Day. Police had earlier announced the contested compound would be closed to Jews and tourists, with the High Court of Justice rejecting a petition against the closure and leaving the final decision up to police.

Police said in a statement that “a riot began that included the hurling of stones, chairs and various objects.”

Palestinian reports said at least one person was detained and removed from the site.

Police said later in the morning that clashes were renewed and that hundreds of rioters threw rocks and chairs at Israeli security personnel.

Watch these “peaceful Muslim worshippers” and see how they treat what they claim as their 3rd holiest site. What an utter disgrace!! It’s not as if the Jewish visitors wanted to enter the actual mosque. All they want to do is walk around the area on the outside.

I have to say, kol hakavod to the Israel Police who for the first time in a long time did the right thing. Instead of punishing the Israelis who want to visit their holiest site on Jerusalem’s celebratory day and closing the Temple Mount to them in order to “keep the peace”, the police permitted Jewish visitors to ascend, and instead confronted and arrested the Muslim rioters. There is no reason why this shouldn’t always be the case. Appeasing violence always leads to more violence.

Left-wing NGO Ir Amin said the violence was renewed after police closed the entrance to the Al Aqsa Mosque, and worshipers attempted to gain entry.

Hundreds of Jewish activists showed up early Sunday morning at the Temple Mount entrance, demanding access to the site — the holiest in Judaism and the third-holiest to Muslims, who refer to it as the Al Aqsa Mosque compound or the Noble Sanctuary. Following a security assessment, police decided to let them in after suppressing the Muslim demonstration.

Meanwhile, thousands of Jews flocked Sunday to the nearby Western Wall — the holiest site where Jews are allowed to pray — to mark the occasion.

Police were deployed in force and on heightened alert in Jerusalem Sunday, with tighter security inspections performed at checkpoints connecting the city to the West Bank in light of Friday morning’s stabbing terror attack in the capital’s Old City, in which two Israeli civilians were injured — one of them seriously.

A Palestinian teenager had stabbed two Israelis inside the Old City before being shot dead by Israeli police.

The most sensitive event is expected to be a parade that will go through the streets of the Old City in the afternoon and is frequently marked by tension with local Palestinians.

Regarding the stabbing terror attack on Friday mentioned above, both victims are thank G-d improving:

The very seriously hurt victim is now breathing on his own, though he is still in serious condition:

A man seriously injured in a stabbing attack in Jerusalem’s Old City on Friday is now breathing without the help of a respirator, according to the Shaare Zedek Medical Center.

The hospital says Gabriel Lavi’s condition has improved but he remains in intensive care.

In addition to Lavi, 16-year-old Yisrael Meir Nachumberg sustained light-to-moderate wounds in the stabbing near the Damascus Gate.

May they both have a speedy refuah shlema.

Besides the Palestinians, you know who else is angry with us? Jordan. Yes, the country that broke every rule in the international law playbook, expelled every single Jew from the Jewish Quarter in 1948 and desecrated the ancient Jewish cemetery on the Mount of olives and blew up every single synagogue in the Jewish Quarter is condemning Israel for allowing Jews (gasp!) to visit – not to pray! – their holiest site:

Jordan is condemning the “provocative Israeli policies” at the Temple Mount in Jerusalem’s Old City after clashes between police and Muslim worshipers at the holy site.

“We unequivocally condemn the continuation of Israeli violations against Al-Aqsa, by the break in of extremists [to the Temple Mount] in a defiant manner with the backing of security forces,” Jordan’s foreign ministry says in a statement, according to the Ynet news site.

The statement also warns against “the dangerous ramifications of the provocative Israeli policies, which could lead to a new escalation of violence that threatens the entire region.”

I bet you didn’t know that Chutzpah was an Arabic word.

And besides the Palestinians and Jordan? The European Union, that’s who. The very same EU which continues to pay “aid” money to the Palestinian authority who revolve it to pay salaries to terrorists or their families as a reward for killing Jews – in other words “pay for slay”. The EU don’t like that Israel is building housing in its own capital!

The European Union on Saturday criticized plans for new construction in Jewish East Jerusalem neighborhoods, saying that Israel’s policy was an “obstruction to peace.”

“The policy of settlement construction and expansion in East Jerusalem continues to undermine the possibility of a viable two state solution with Jerusalem as the future capital of both states, which is the only realistic way to achieve a just and lasting peace,” the statement read.

“The European Union is strongly opposed to Israel’s settlement policy, including in East Jerusalem, which is illegal under international law and an obstacle to peace,” it continued.

Well no, dear Euros. Jerusalem is the capital of the Jewish state only, and will never be the capital of any Palestinian state should it come into being. and building housing – what they call settlements and we call homes for Jews – are not illegal and international law has nothing to say about it. See Eugene Kontorovich for details.

So Chutzpah is now a European word as well.

But let’s not concentrate only on the bad stuff. Today is a chag, a festival, where we rejoice for Jerusalem and in Jerusalem.

The traditional annual flag dance, in which tens of thousands of Israeli youth participate, dancing through the Old City with flags in their hands until they reach the Kotel, is under way at the moment and hopefully it will continue with no unusual incidents:

Sivan Rahav Meir, as always, has some beautiful things to say;

First of all, we do not only celebrate the liberation of Jerusalem. We also celebrate the rescue of Tel Aviv. Those who were here during the days before the break of the Six Days War – can tell you. The whole existence of the young State of Israel was in danger in 1967. Our 19-year-old country was not only saved; it grew several times in size, and returned to the biblical areas of the Land of Israel.

Second, because of the fulfillment of the dream. Elie Wiesel, Nobel Prize Laureate, once said that Jerusalem connects people to each other in a mysterious, inexplicable way. When a Jew visits it for the first time, he says that this is not his first time. It is a return home. A friend of mine, a new Olah from Ethiopia, told me years ago how every time she and her siblings saw, in their childhood in Addis Ababa, a stork flying in the sky, they used to cry to it: “Stork, stork, how is Jerusalem doing?”
Natan Sharansky once said how, when he was convicted together with his friends of treason in “Mother Russia”, they were asked by the court to sum up their defense arguments. Sharansky then said: “I have nothing to say to this court, but to the People of Israel and to my wife I say: Next year in Jerusalem”. We are living within a 2,000-year-old prophecy, that is being fulfilled.

Third and most important: We are happy today because of the enormity of the present challenge, because of the great chance we received precisely in our generation, of all generations. We won the lottery, and now, what do we do with this treasure? Our mission is to turn all this energy, all the ancient oaths and yearnings and prayers, which are thousands of years old – into something practical, to make the Heavenly Jerusalem (ירושלים של מעלה) and the Earthly Jerusalem (ירושלים של מטה) united, to make sure that this place will indeed announce an alternative culture to the whole world. We’re on our way there.

Chana Zemer, editor of the Davar newspaper (a famous secular newspaper, closed in 1996), wrote in the newspaper after the arrival of our soldiers to the Western Wall: “ובא לציון גואל. Redemption came to Zion. For two thousand years – eighty generations – the Jews turned to the East: during Shacharis, Minchah and Ma’ariv. Thousands of years have not blurred the national memory with which a Jew is born, just as he is born with all of his bodily organs. All the biblical verses are coming alive in front of our very eyes.”

People do not write like this in newspapers anymore, and yet we must not forget the great great grandparents of all of us could have never imagined that they would ever merit to pay Arnona (city tax) in Jerusalem, to be stuck in traffic jams in it and also to quarrel and argue about its character. We merited to do so.

Such deep and true words which we all need to take to heart.

Keeping in mind the huge sacrifice paid by our young nation and our courageous soldiers, here is a very moving video by Yoram Zamush who was the commander of the IDF paratroopers platoon that led the breakthrough into Jerusalem in the Six Day War of 1967.

It gives me the shivers to watch and to listen to those faraway sounds, which are yet so close to our collective memory.

Wishing Jerusalem and Judea & Samaria, who were also liberated in 1967, Chag Same’ach! We continue to enjoy your reunification and rebulding!