Apologies for the long hiatus in blogging. Family life, crises and dramas keep getting in the way.

But now it’s time to catch up on some good news for a change, so here is my latest Good News Friday post.

My first item is davka related to all the bad news about the spread of the coronavirus. It has unfortunately reached Israel via travellers to the Far East as well as Italy. However these Israeli patients have helped researchers find a viable diagnostic tool and possible treatment. 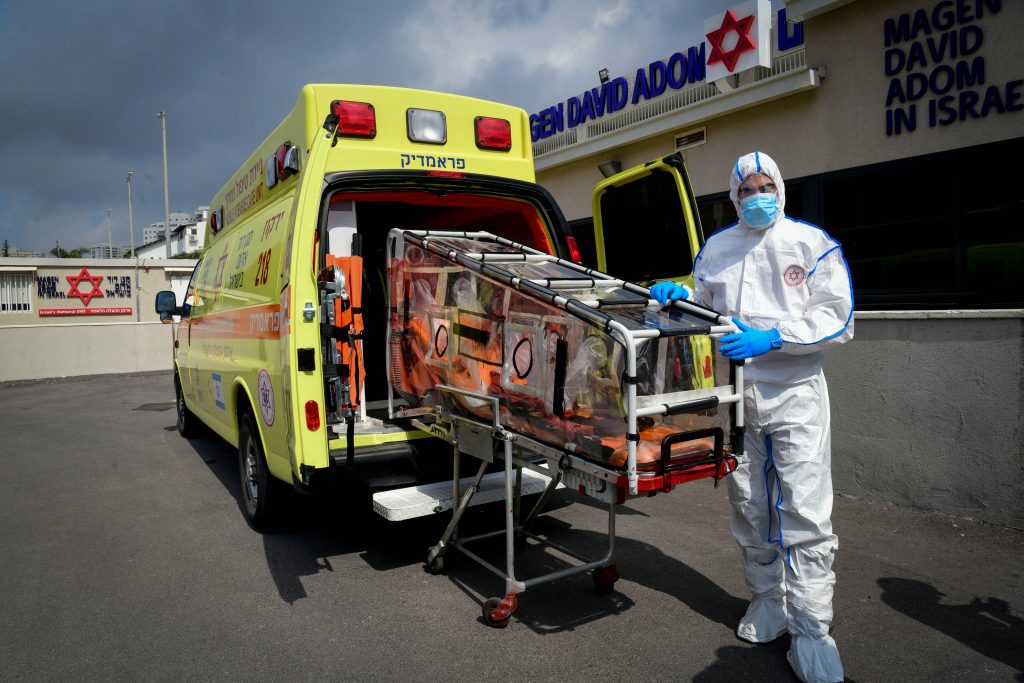 A Magen David Adom worker wears protective clothing as a preventive measure against the coronavirus, outside the special emergency call center in Kiryat Ono, on Thursday. (Flash90)

The Israeli-researched diagnostic tool for the detection of coronavirus is already being produced in Italy:

An Israeli firm said Thursday it has developed a kit to test for the coronavirus, sending its stocks soaring as the world hunts for an effective way to confirm who is carrying the fast-spreading contagion.

Hod Hasharon based BATM said production on the quick diagnostic kit was underway at a facility in Rome owned by Adaltis, which manufactures various medical testing devices.

Health officials have urged the development of rapid testing devices to screen who may have the virus, as questions have arisen about current diagnostic tools’ ability to flag carriers. Health officials have also worried about overtesting and deluging health systems with false positives that will lead to public panic.

BATM said in a statement that its test’s ability to successfully screen those carrying COVID-19 had been verified by several labs and hospitals, and that customers in several countries had expressed interest. It did not provide details.

It said the test met criteria set out by the US-based Centers of Disease Control and that it was working with European research institutions to develop “a price point suitable for large scale production.”

The company’s stock rose 16.4% on the London Stock Exchange and 9.3% in Tel Aviv’s boursa Thursday, making it one of the few winners on an otherwise brutal day on the trading floor.

As for the treatment of this deadly virus, the Israeli research firm Migal Galilee Research Institute has developed a breakthrough:

A group of researchers in northern Israel said Thursday they had achieved a “scientific breakthrough” in treating coronavirus. At a press conference, researchers of the Migal Galilee Research Institute said that the breakthrough had come while they were doing research on coronavirus in birds. A treatment had been discovered which cured the birds infected with coronavirus, and clinical trials at Israel’s Volcani Agricultural Research Institute had confirmed the treatment’s viability.

The basic coronavirus in birds is very similar in patterns of infection and effect of the virus in humans, and the genetic structure of the virus in both humans and birds is very similar, the researchers said. As a result, the treatment developed for birds could be applicable to humans – and they believed that an effective treatment could be developed for humans within three months, they said.

David Zigdon, Chief Operating Officer of the Institute, said that “there is a great need for an immediate solution to human infection of coronavirus, and we have been working to do that nonstop. The solution we are developing against COVID-19 virus has proven effective, and we believe a version for human treatment can be ready within eight to 10 weeks. That would be followed by a 90-day test period to ensure safety. The treatment we developed for birds is given orally, and the treatment we are developing for humans will also be given orally.”

Huge kol hakavod to the Israeli researchers of both the diagnostic tool and the treatment! The world community owes our little country a huge vote of thanks. What a pity the treatment is not being created in Judea and Samaria – because then all those “human rights supporters” could boycott the treatment.

Someone who most definitely appreciates Israel, and especially the prayer service which was held at the Kotel last week and was dedicated to healing those people in China afflicted by the coronavirus, is this young Chinese man who speaks perfect Hebrew (the “Chinese Itzkik”) with almost no accent at all!

Itzik, known in Israel as “Itzik HaSini” (Chinese Itzik) is a Chinese citizen living in Beijing who speaks fluent Hebrew and works for the China Radio International (CRI) in the Hebrew department and also teaches Hebrew at a university.

Recently Itzik posted a video on his YouTube channel telling viewers how people in China responded to the tefillah at the Kosel for the coronavirus crisis. He showed how the video of the tefillah was posted on various Chinese websites. On one website the post about the tefillah received 634,187 likes and over 18,000 responses.

Just watch this video, if only to appreciate his perfect Hebrew 🙂

Kol hakavod to the Rabbanim and other Israelis who organized and participated at the tefila at the Kotel, creating a great Kiddush Hashem, and thank you to “Chinese Itzik” for his beautiful video.

Another person who appreciates Israel and what our little country has accomplished is a Syrian journalist, of all people. He said “Jews ‘make miracles out of the impossible’:

The Qatar-based Al-Jazeera network recently hosted a debate about Israel and the Arab countries.

Syrian journalist Thaer Al-Nashef, who took part in the debate, said that the claim that Israel is thwarting democracy in the Arab countries is completely unfounded, arguing that all of the dictatorial and authoritarian Arab rulers had been a product of their own Arab societies.

Al-Nashef mocked the conspiracy theories that Israel grooms Arab citizens to become leaders of their countries, and said that Israel is not responsible for the progress or backwardness of Arab societies. Rather, he said that Arabs are responsible for their own development and that they might learn something from the Jews and their ability to “make miracles out of the impossible.”

Furthermore, Al-Nashef said that the often-repeated claim that Israel’s goal is to expand from the Nile River to the Euphrates River is false, and that the two blue stripes on the Israeli flag represent the Jewish prayer shawl, and not these two rivers.

Kol hakavod to MEMRI for finding this clip and translating it. But the greatest kudos go to this brave journalist. I hope he stays safe.

Despite all the tensions in this region, and the enormous balagan in our country with the upcoming THIRD round of elections on Monday (on which I will not express an opinion because I’m so fed up), these items remind us of how proud we can and should be of our crazy little country.

Shabbat Shalom everyone! May you have a warm, dry, safe and peaceful Shabbat.