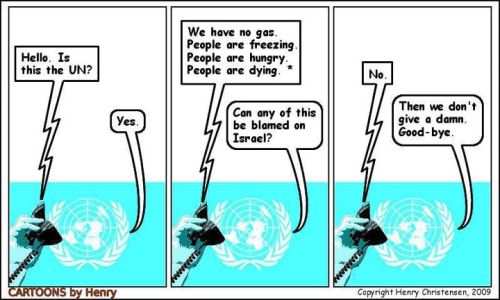 The UN Human Wrongs Council has a standing Agenda Item Number 7 in which “Israel’s human rights abuses” are discussed. The very title of the Agenda item invites the inevitable biased conclusion.

Continuing their previous approach, the United States decided to boycott the UNHRC session in which Agenda Item no. 7 was debated. The State Department’s objections read as follows:

The United States strongly and unequivocally opposes the existence of the UN Human Rights Council’s Agenda Item Seven: “Human rights situation in Palestine and other occupied Arab territories.” Today’s actions in the Council are yet another reminder of that body’s long-standing bias against Israel. No other nation has an entire agenda item dedicated to it at the Council. The continued existence of this agenda item is among the largest threats to the credibility of the Council.

As an expression of our deeply-held conviction that this bias must be addressed in order for the Council to realize its legitimate purpose, the United States decided not to attend the Council’s Item Seven General Debate session. It does not serve the interests of the Council to single out one country in an unbalanced matter. Later this week, the United States will vote against every resolution put forth under this agenda item and is encouraging other countries to do the same.

The United States envoy to the Human Rights Council, Erin Barclay, set out the US’s position already at the beginning of March:

Even more encouragingly, the United States has given warning that in the absence of reform at the HRC, they might reconsider their participation in the Council altogether:

America is one of the council’s 47 member-states, but the Trump administration has warned that it could reconsider its participation unless a number of changes are made, including changes in the UNHRC’s treatment of Israel.

The US also pledged to vote against five anti-Israel resolutions the council is expected to pass later this week. The UNHRC will also likely approve seven resolutions regarding human rights abuses in seven other countries, including Syria and Iran.

The UN Human Rights Council is mandated to dedicate Agenda Item Seven to a discussion on human rights abuses in Israel at every session.

It is the only country against which there is such a mandate; all other human rights abuses, including those by Syria and Iran, are examined under Agenda Item Four.

“Today’s actions in the council are yet another reminder of that body’s long-standing bias against Israel. No other nation has an entire agenda item dedicated to it at the council,” the State Department said. “The continued existence of this agenda item is among the largest threats to the credibility of the council. As an expression of our deeply held conviction that this bias must be addressed in order for the council to realize its legitimate purpose, the United States decided not to attend the council’s Item Seven General Debate session.”

The HRC was too much even for the Obama Administration in the end:

Under former president George W. Bush, the US refused to participate in all council debates, but former president Barack Obama believed it was important for the United States to engage the council.

The US held a UNHRC seat for six of Obama’s eight years in office.

Under his administration, the country always voted in support of Israel and in the last few years, it also refrained from participating in Agenda Item Seven debates.

The EU and most Western countries have followed suit. Israel’s Ambassador to the UN in Geneva Aviva Raz Shechter, who also boycotted the session, said: “The Human Rights Council is obsessed with Israel and continues to lose its standing.”

Standing up for Israel, in place of the Israeli envoy who was also boycotting the debate, were stalwart pro-Israel organizations.

My statement yesterday at the UNHRC on behalf of the @WorldJewishCong: End the double standards against #Israel and remove Item 7. pic.twitter.com/m1G5hyToWr

And here is UN Watch’s unrelentingly persistent Hillel Neuer, addressing those benighted dictatorships and Arab states who condemn Israel for apartheid while they themselves are the greatest perpetrators of apartheid. “Where are your Jews?” he asks them pointedly:

Kol hakavod to the WJC and UN Watch, and kudos too to the State Department as well as other Western countries who boycotted the event. It is very encouraging to note that they can see the evil bias in this permanent agenda item which exposes the ludicrous, not to say outrageous, hypocrisy of the Human Rights Council.

Which then begs the question why do these countries – and I include Israel in this – even belong to the HRC any more? Why not disband it? Or simply set up a parallel Human Rights Council which will actually concern itself with real human rights abuses. They could do worse than start with the human rights abuses of the other participating members of the HRC.