Posted on 6 November 2017 by anneinpt

Last week, as part of the celebrations marking the centenary of the Balfour Declaration, Britain’s Prime Minister Theresa May held a dinner attended by Israeli Prime Minister Binyamin Netanyahu and many other British and Jewish dignitaries.

But who was the one person who didn’t come to dinner? Why, it was no other than the Labour Party leader Jeremy Corbyn. Tim Marshall, political pundit and former Sky News diplomatic and foreign correspondent, reminds us how Corbyn has yet to meet a terrorist he does not like, yet his hostility is directed towards Jews and Israel: (emphases are mine):

Without giving a reason, Mr Corbyn declined the invitation and instead is sending his shadow foreign secretary Emily Thornberry.

As he has not given a reason for failing to engage, not only with an important event in history, but also with the leader of another country, it is left open to speculation as to his rationale.

There is not enough space here to document his five decades of opposition to Israel and support for those who oppose the country, including those who use terrorism, but any idea that the would-be Prime Minister of the UK is even-handed on the Israel/Palestine question is risible.

He has only ever been comfortable hosting groups such as Hamas and Hezbollah. Both organizations are regarded by numerous countries as terrorists, both have been called ‘friends’ by Mr Corbyn. He justified this term by saying it is important to engage with the different parties to the dispute. However, he does not extend this argument to the Prime Minister of Israel. In the event of the Palestinian President  Mahmoud Abbas coming to London it will be interesting to see if Mr Corbyn meets him.

In 2014 Mr Corbyn attended a wreath laying ceremony in Tunisia held to honour a Palestinian terrorist who helped organize the 1972 Munich massacre of Israeli athletes. He has shared platforms with rabid Islamist anti-Semites of the type who also call for homosexuals to be killed.

Tim Marshall describes how Labour has become a home for antisemites, and then turns to Corbyn’s deputy Emily Thornberry who was sent in his place:

Mrs Thornberry, who hopes to be Britain’s foreign secretary, could have used her late invitation to engage with the Israeli government and build a relationship for the future. Instead she has made a statement suggesting she regrets that the State of Israel even exists saying “I don’t think we should celebrate the Balfour declaration but I think we have to mark it because it was a turning point in the history of that area and I think probably the most important way of marking it is to recognise Palestine.”

Her tone contrasts with that of the British Foreign Secretary Boris Johnson who, in celebrating the Balfour declaration, wrote – “I see no contradiction in being a friend of Israel and a believer in that country’s destiny, while also being deeply moved by the suffering of those effectively dislodged by its birth. The vital caveat of the Balfour Declaration intended to safeguard other communities has not been fully realised.”

While I disagree with Marshall’s – and Johnson’s – caveat about the Palestinians, he does mention the egregious situation of Christians and other minorities under the Palestinians rule:

A case can be made that the only parts of the subsequently divided land where non-Jewish communities have equal rights in law (if not always in practice) is the part now renamed Israel. In Palestine, the embattled Christian Arab minority is shrinking, especially in Gaza. The Palestinian view is that no Jews whatsoever should be allowed to live in Palestinian territory.

The level of antisemitism in Labour is really serious if it is now reported on in the mainstream British press and sites like Tim Marshall’s.

For further insight, let’s have a look at a meeting which Jeremy Corbyn was happy to attend, as opposed to the Balfour dinner. In that same week he attended a meeting in Parliament of the Muslim Engagement and Development (MEND):

Jeremy Corbyn attended an event in Parliament held by a Muslim group accused of hosting preachers with extremist views.

Mend was this week accused by a think tank of being “Islamists masquerading as civil libertarians”.

Who are the people at MEND? Habibi at Harry’s Place provides an extensive backgrounder – and it is very alarming indeed:

Yes, there are some nasty attacks on Muslims these days. Look at the outrageous record of MEND, for example. It targets the liberal, secularist and anti-extremist Muslims who need and deserve support. Streeting, by contrast, is betraying them by bestowing legitimacy on their extremist tormentors.

Just one line from MEND’s founder, sole shareholder and former CEO should set you straight here, Mr Streeting. Here’s Sufyan Ismail attacking Tell Mama, the anti-Muslim hatred monitoring group which has been backed by the CST and Peter Tatchell. Note just how Ismail does it, if you don’t mind.

We don’t want the Government to fob us off with some phony thing called Tell MAMA, which has got a made pro-Zionist pretty much heading it or in a very senior capacity and is making all sorts of comments we might not agree with when it comes to homosexuality, to be recording Islamophobia.

What about “battering the 300 year-old Israeli lobby”? Is that “tackling antisemitism”?

… You see, the evidence against MEND is simply overwhelming now. Have a look at this new report by the Henry Jackson Society for yet more. The report’s executive summary is worth reproducing in full:

* Mend has regularly hosted illiberal, intolerant and extremist Islamist speakers at public events. This has included those who have promoted Jihad, homophobia and anti-Semitism, as well as those who have legitimised the killing of adulterers and “infidels”.[…]

Mend and senior figures in Mend have praised and/or partnered with other groups linked to extremism, such as iERA, Friends of Al Aqsa and, most regularly, the pro-terrorist group Cage […]

* Mend and its employees and volunteers have attacked liberal Muslim groups and Muslims engaged in counter-extremism,[…]

* A number of the figures in Mend, including senior employees and volunteers, have promoted anti-Semitism and demonisation of Israel, particularly engaging in hate speech and anti-Semitic conspiracy theories over social media, as well as at Mend events.

There is much more to say about the rising antisemitism in Labour and on the left in general. That will be addressed in another post.

Meanwhile, what to make of Emily Thornberry’s statement at the Balfour dinner? On the one hand it could be taken to mean, at face value, support for Zionism, contrary to the common party line of Labour, as Gene writes at Harry’s Place:

People who believe Israel does not have the right to exist should be drummed out of the Labour Party, Emily Thornberry said today. 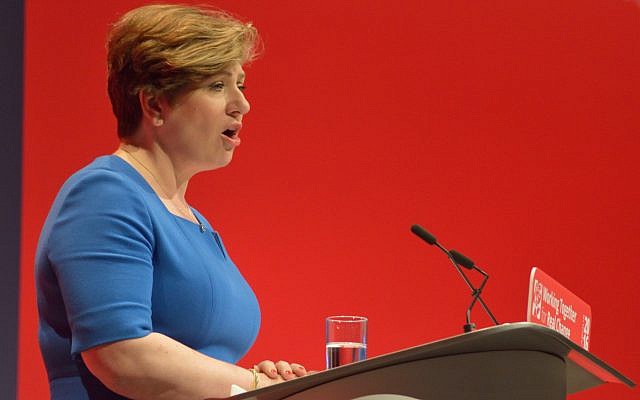 The shadow foreign secretary also used a speech to mark the centenary of the Balfour Declaration – which enshrined Britain’s support for a Jewish national homeland – to condemn the “scourge” of anti-Semitism.

Thornberry, one of Jeremy Corbyn’s closest allies, was clear to repeat Labour’s longstanding call for international recognition for a Palestinian state living alongside an Israel in “peace and security”.

“As we look back over these past 100 years, we must also salute the resilience and strength of the Israeli State and the Israeli people against all those who have sought to harm and destroy them: a resilience that has had constantly to adapt as the threats over the years have changed from the conventional warfare of 50 years ago to the ever-shifting tactics of terrorists today,” Thornberry said today.

So what does this mean? Taken at face value, Thornberry’s statement suggests she believes anti-Zionism within Labour should not be tolerated. Did Corbyn approve this welcome development? If not, how will he and his anti-Zionist supporters react? How does this fit in with the reinstatement to the party of the anti-Zionist Moshe Machover? And perhaps most important, is Thornberry willing to go to the mat on this? Beyond rhetoric, how far is she willing to take it?

Gene’s theory was thoroughly refuted in the comments to the piece, but the best rebuttal came from Melanie Phillips, who addressed Thornberry’s comments about Israel which she made to another news outlet, in her article the malevolent guest at the Balfour Dinner:

Now remarks made by Thornberry inescapably imply that, like Corbyn, she too regrets the fact that Israel was ever created. Instead she supports its mortal enemies whose agenda remains Israel’s destruction.

In an interview published today with the Middle East Eye news site, Thornberry said the UK should not celebrate the Balfour Declaration, which pledged Britain’s support for a Jewish national home, because there is not yet a Palestinian state.

“I don’t think we celebrate the Balfour Declaration but I think we have to mark it because I think it was a turning point in the history of that area and I think probably the most important way of marking it is to recognise Palestine.”

And she went on to blame Israel for the fact that there was no state of Palestine.

The fact that she paid the usual lip-service to “two viable secure safe states” cuts no ice whatsoever. If she believes that the original commitment by the British government to restoring the Jewish people to their own rightful homeland is not something to be celebrated in itself, the deep hostility to Israel as a Jewish state that this inescapably implies vitiates any pious backing for “two viable states” side by side.

Her support for the existence of Israel is, by her own lights, conditional on the existence of a state of Palestine. She thus displays her profound ignorance of Jewish, Arab and Middle Eastern history by assuming that people called the Palestinians were entitled to the same promise of a national homeland.

By wrapping herself in the Palestinian cause, Thornberry is associating her party once again with an agenda of colonialist aggression (the Palestinians remain committed to the destruction of Israel), racist ethnic cleansing (the Palestinians repeatedly declare that no Jews would be allowed to live in a state of Palestine) and antisemitism (the Palestinians attempt ceaselessly to write the Jews out of their own history and religion and use Nazi-style imagery and blood libels to incite their children to anti-Jewish hatred).

Emily Thornberry has once again revealed the vicious reality of the Labour party and the malevolent threat to the Jewish people that it has become.

The “vicious reality of the Labour party” that Melanie Phillips refers to is so depressing and so terrifying that it is almost too difficult to contemplate. But contemplate it and confront it we must.

1 Response to #Balfour100 – Look who didn’t come to dinner