Earlier this week Palestinian “President-for-Life” Mahmoud Abbas delivered an anti-Israel and anti-American tirade almost unprecedented in his career for its historical revisionism, antisemitic conspiracy theories, its ugly insults and its effect of burning all his bridges. 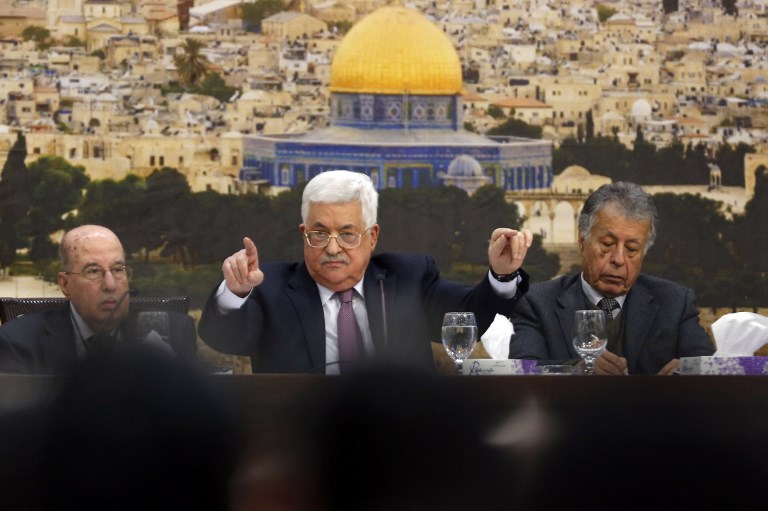 The PA leader delivered a mini-lecture on his understanding of the history of Zionism on Sunday, claiming the Jewish state deliberately stirred trouble in Arab countries in order to forcibly move Middle Eastern Jews into the sparsely populated nascent state.

Abbas, in his address, made no mention of the Jews’ historic presence and periods of sovereignty in the holy land. Israel is the only place where the Jews have ever been sovereign or sought sovereignty.

Just look at some of the other outrageous absurdities, not to mention outright lies, inventions and falsehoods in his rant (highlights are added):

“Colonialism created Israel to perform a certain function. It is a colonial project that has nothing to do with Judaism, but rather used the Jews as a tool under the slogan of the Promised Land,” said Abbas, who added that he was borrowing from the scholarly work of Egyptian intellectual Abdel-Wahab El-Messiri. El-Messiri wrote an eight-volume Encyclopedia of Jews, Judaism and Zionism.

Once the State of Israel was created, Abbas maintained, Israeli leaders were hard-pressed to get Jews to immigrate to the country.

The Palestinian leader suggested the Jews of Europe — six million of whom would be killed by the Nazis — chose to remain in their home countries during the Holocaust, rather than emigrate.

“The Jews did not want to emigrate even with murder and slaughter. Even during the Holocaust, they did not emigrate. By 1948, Jews in Palestine were no more than 640,000, most of them from Europe,” he said.

In fact, from 1939 to 1945, the British mandatory authorities prevented almost all Jewish immigration to Palestine, at the behest of the Arab states.

Next he embarks on surreal historical inversion and invention:

“Ben-Gurion did not want Middle Eastern Jews to come [to Israel]…but when he saw the vast land, he was forced to bring Middle Eastern Jews… that didn’t want to come. From Yemen they flew 50,000 Jews…They didn’t suffice with 50,000 Jews. Then they went to Iraq, which had large reserves of Jews,” said Abbas.

Some 49,000 Yemeni Jews were brought to the nascent State of Israel in Operation Magic Carpet in 1949-50.

Abbas claimed the Israelis cut deals with the Iraqi politicians “to take away the citizenship of Jews and force them to emigrate.”

“They did not suffice with this and gathered all the Jews in Arab countries, from Morocco to Algeria and Tunis, Libya, Egypt, Syria and Lebanon,” Abbas said.

The establishment of the Jewish state in 1949 was met with violent riots, looting, and attacks on local Jewish populations in countries throughout the Middle East, including Yemen, Iraq, Syria, and Egypt.

Some 900,000 Jews fled, or were forced to flee, their homelands following the creation of the State of Israel. As a result, the Jewish population of the Middle East (excluding Israel) and North Africa shrank from 856,000 to just 4,400 today.

In his remarks, Abbas reiterated his demand that Britain apologize for its 1917 Balfour Declaration, which endorsed the idea of a Jewish state.

There is much more at the link, but here is a short version of the speech in an excellent video by Stand With Us:

The reactions of the Israeli body politic were unanimous across the political spectrum.

In response to the address, Israel’s Defense Minister Avigdor Liberman said on Monday that Abbas had “lost his senses.”

While the international media for the most part reported on Abbas’ speech, they made little to no mention of the antisemitic conspiracy theories contained therein. The BBC, for example, censored its reporting of Abbas’ speech:

Unfortunately, there is also nothing novel about a BBC report on a speech made by the Palestinian president in which the parts of his remarks that do not fit the corporation’s chosen narrative are erased from audience view: only last month the BBC News website did the exact same when reporting on an address delivered by Abbas in Turkey.

Just as BBC audiences are never told about the ‘moderate’ Palestinian president’s personal role in the PA’s incitement to violence and glorification of terrorism or his refusal to recognise the Jewish state, they likewise do not hear anything about his longstanding denial of Jewish history and distortion of the origins of modern Israel.

Danny Danon, the Israeli envoy to the UN, demanded that the UN condemn Abbas’ vile fabrications – to no avail of course.

David Horovitz explains that Abbas cannot make peace with the Jews because he has come to believe his own lies: (again, highlights are mine):

The Palestinians, by contrast, have refused to acknowledge Jewish legitimacy, and convinced themselves that Israel is a transient, shallow presence that can ultimately be ousted. This, despite the spectacular evidence of our strong, resilient, thriving nation.

A century ago, it was axiomatic in Islam that there were Jewish temples atop the Temple Mount; that’s why the Muslims subsequently placed mosques there. What Abbas’s speech so dismally underlined is that the false narrative of Jewish history that has taken hold in more recent decades is not only cynically disseminated by Palestinian leaders to their people, but also thoroughly accepted by the leaders themselves.

Such crazy conspiratorial thinking, @wrmead has argued, “is the sign of profound mental/social failure – & a harbinger of more failures & errors to come.”

Ans: Cognitive dissonance – so called int'l community seems incapable of distinguishing between myths and reality. It's been 70 years and many still don't get it. @FedericaMog @margotwallstrom

The main effect of Abbas’s tirade is his exit from the peace process:

RAMALLAH, West Bank (AP) — There seems to be no going back for Mahmoud Abbas after the Palestinian leader cursed and ridiculed US President Donald Trump and his aides in a pugnacious speech — a very public break with the 82-year-old’s long-standing efforts to cultivate Washington’s goodwill as the sole pathway to Palestinian statehood.

Abbas’ pivot from quiet diplomacy to loudly challenging the US and Israel brings him in line with his aggrieved public and quashes any last expectations of a US-brokered peace deal, but could also unleash forces that might eventually bring down his self-rule government.

“Yekhreb beitak!” (literally “May your house be demolished”) Abbas exclaimed to laughter from a hall packed with Palestine Liberation Organization officials, cursing Trump as he recounted the recent US measures. Burning more bridges, Abbas also lashed out at Trump’s ambassadors to the UN and to Israel, Nikki Haley and David Friedman.

His core message was to reject pre-emptively what he fears to be an upcoming US plan for a Palestinian mini-state on only some of the lands captured by Israel in 1967 and without a foothold in Jerusalem. “We will not accept a deal America dictates,” Abbas said defiantly.

While it’s noteworthy that the recipient of $712M in US foreign aid ($350M of which was used to pay terrorists and their families) called the President a derogatory name, the more noteworthy development is that he reverted to the Palestinian trope that Israelis are European colonialists.

This is significant, not only because he is denying archaeological evidence of a 3000 year old Jewish presence in Israel & Jordan as well as the expulsion of 800,000 Jews Arab Countries when Israel was founded. This is significant because it perpetuates a Palestinian myth which rejects the basis for a two-state solution.

In the best-selling book “Catch 67,” Michah Goodman frames the two-state solution as a trade of 1967 (Israeli relinquishes control of the Judah and Samaria) in exchange for 1948 (Palestine relinquishes the right of return).

Goodman argues that the Palestinians are “trapped” because the trauma of 1948 is greater in the Palestinian psyche than the military loss in 1967, and, moreover, Islamic law prevents them from agreeing to permanent recognition of a foreign power in once-Islamic ruled territory.

Perhaps that is why Abbas never even responded to Olmert’s detailed peace maps in 2008.

By reasserting that Jews are occupiers in the region, not just in the territory conquered in 1967 (False), Abbas sows the belief that the colonialists will go back to where they came from (Where exactly? Morocco and Tunisia?), and Palestinians will one day return to Jaffa and Haifa. Moreover, he proves Goodman’s thesis that Abbas can never trade 1967 for 1948. …

Roth goes on to list all the ways in which Abbas and the Palestinians have failed in their mission:

The US plans to defund UNRWA.

The Palestinian middle class is exploding in new cities like Rawabi.

Saudia Arabia has floated the idea of Abu Dis as the capital of Palestine.

Egypt thinks it should be Ramallah.

The Arab League boycott is effectively over. They are far more concerned with Iran that Al Quds.

President Trump recognized Jerusalem as the capital of Israel.

A Palestinian leader has never been this isolated, and he has nothing to gain by moving the ball forward. He seems to have finally decided to burn it all down.

But what will come next? That is anybody’s guess. It could be a continuation of the status quo,  i.e. Israel simply managing the conflict. It could be Israeli annexation of Judea and Samaria. It could G-d forbid explode into another war. The Palestinians could melt-down into a civil war between those who advocate continued rejectionism of a Jewish presence in the Middle East and those who seek an accommodation with Israel.

We will just have to hunker down and be prepared for anything.