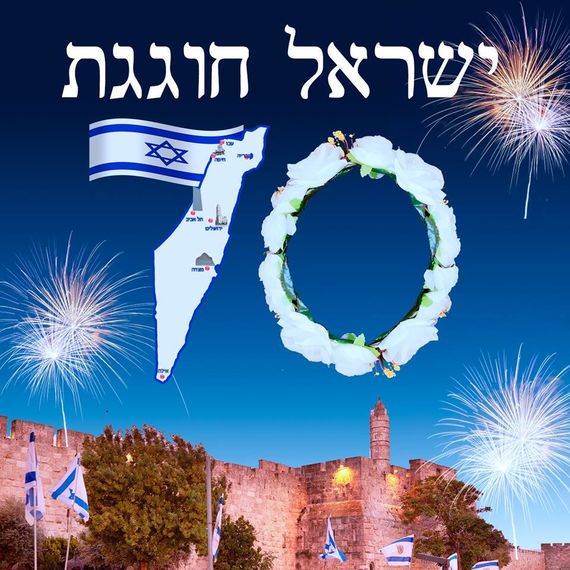 This year is no ordinary Independence Day. Israel has turned 70 tonight! Who would have thought, 70 years ago when the country was on the brink of extermination by its enemies as soon as it was born, that a mere 70 years later it would be one of the most flourishing, developed and happy countries in the world!

Our grandparents would blink in astonishment as they saw the highways, the bridges, the skyscrapers, the beautifully developed moshavim and kibbutzim, and the enormous growth of the population from a mere 600,000 to almost 8.5 million today with 43% of world Jewry living there.

Our grandparents would also be astounded to learn that Britain, Canada, Greece and Italy, together with countries such as Poland and Austria will be taking part in a fly past tomorrow as a salute to Israel. Again, a mere 70 years ago, the latter two countries were the Jews’ mortal enemies. Who can take in such developments when the wheel of history has spun so dizzyingly fast?

A while back I wrote down some of my thoughts on this amazing milestone in Israel and the Jewish People’s history:

When I first got here back in 1977,  you couldn’t find decent coffee, sellotape which stuck, tissues which could be pulled out one by one, toilet paper that actually tore on the perforations, consumer products were prohibitively expensive and polite customer service was something to be dreamed of. Soviet-style bureaucracy strangled the economy while it wrecked citizens’ nerves and wasted our time.  The national health system was OK but that was as far as it went. It was far behind other Western countries, and again, the bureaucracy was a nightmare.

Militarily, Israel was superior to the Arab states around it, but it was a precarious position where the Arabs, far more numerous than us, were backed by the Soviets, while we were supported by the Americans but not by much else. Diplomatically Israel was very isolated, with most of the vast African, Asian and Indian countries off-limits to us.

Look how far we have come today! Thanks to all the governments from Menachem Begin on down, the economy has been largely privatised, bureaucracy has been cut dramatically (still needs improvement though!), customer service has improved beyond recognition (could always do with more improvement though!), and consumer products are widely available at reasonable prices for the most part. (Unfortunately housing and food prices have risen way beyond what many Israelis can afford, and this needs to be addressed urgently by the government. But nobody said Israel is perfect. Only I do, occasionally. 😉  )

Militarily, Israel is in an incomparably better position than it was 40 years ago, let alone 70 years ago. And diplomatically our status is something that Herzl, Jabotinsky and Weizmann could only have dreamed of.  Who could have imagined that Israel would have close diplomatic and trade relations with Russia, China, the Far East, dozens of African states, as well as with Europe and the US?

Watch this video not only to understand Israel’s history, but also to realise how miraculous our rebirth as a nation has been (h/t Rifka):

Watch this brilliant timeline of Israel’s history of the last 70 years, condensed into under 3 minutes:

If you want to delve more deeply into the above developments, you can read further details at this link.

And now to the celebrations. Last night we marked the transition from the moruning of Yom Hazikaron to the joy of Yom Ha’atzmaut with festive prayers in synagogues and the traditional torch-lighting ceremony and show on Mt. Herzl, which outdid itself this year in honour of our 70th birthday. You can watch the ceremony and show below.

Tomorrow will see 120 outstanding soldiers being awarded citations at the President’s residence; the traditional Bible Quiz and the Israel Prize ceremony.

Most importantly, we will witness the opening of the long-promised and awaited US Embassy in Jerusalem!

In honour of Israel’s special birthday 40 UN Ambassadors are visiting Israel on a 5-day tour. I wonder if that will change their voting patterns…

But what Israelis love to do most, and what they do best when they want to celebrate – is sing! I have already written about Koolulam last week. Recently, in honour of Israel’s 70th birthday, Koolulam got together 12,000 Israelis and within the space of an hour or two, formed them into a fantastic choir singing that wonderful anthem by Israel’s “poet laureate” Naomi Shemer, “Al Hadvash ve’al ha’oketz” – “For the honey and the sting”. Watch below, shed a tear and smile 🙂

What a way to celebrate such an important milestone!

Happy Birthday Israel! Mazal tov and many more until way more than 120 years!