Let’s start with one of my favourite subjects, Israel’s biomedical industry. There are several great items to report this week.

A British doctor who treats cancer patients has discovered that a special Israeli honey, Life-Mel Honey, neutralizes the worst of the side-effects of chemotherapy.  You can read about it at the link but the explanation is just as clear in the video below. The doctor clearly explains the devastating effects of chemotherapy on the body and how the honey helps:

Kol hakavod to the Israeli developers of Life-Mel honey. Israel bringing sweetness to the world – what better news could there be?

Another method of treating cancer has also been discovered by Israeli researchers who have found a way to curb the growth of cancer cells:

A group of researchers at Ben-Gurion University of the Negev has developed a new molecule that they say inhibits the growth of cancer cells and also reprograms them to be noncancerous.

The new treatment is based on inhibiting the production of a protein, the voltage-dependent anion-selective channel 1 (VDAC1), highly increased levels of which are found in many solid and non-solid tumors.

The research was led by Prof. Varda Shoshan-Barmatz of the Department of Life Sciences and the National Institute for Biotechnology in the Negev Ltd. (NIBN), both of which are part of BGU. 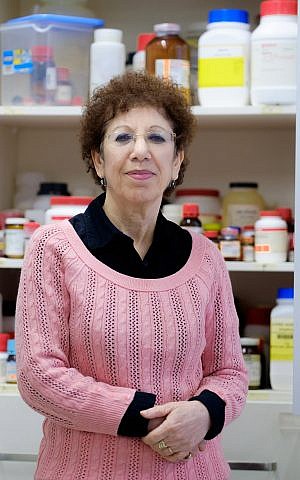 The VDAC1 protein regulates the mitochondria, which control cell metabolism. Cancer cells are known to have a very active metabolism.

The researchers thus developed a molecule called the siRNA, which when applied to the cells was found to stop the growth of cancer cells and when applied to mice with tumors, it caused the shrinking of the tumor. Not only that, explained Shoshan-Barmatz, the cells were found to go back “to their original normal-like state.”

The study was conducted on both in vitro and in mouse models of brain cancer, lung cancer and breast cancer.

Normal cells, which are not as needy of the VDAC1 protein, did not react negatively to the drop in the protein level, she said. The “treatment with siRNA against VDAC1 inhibited growth of cancer cells but not of noncancerous cells, pointing to a potentially safe treatment.”

And most significantly, she added, the siRNA treatment of various cancer types in mouse models “resulted in reprogrammed cancer cells metabolism, leading to reduced tumor growth, induced disappearance of cancer stem cells and prompted cell differentiation. Thus, we discovered a code for reprogramming cancer cells so that they lose their oncogenic features.”

“Although still in early stages, we are excited with our results that demonstrate the potential of this novel molecule for cancer treatment,” said Shoshan-Barmatz.

The potential for this new treatment is enormous. Kol hakavod to Prof. Shoshan-Barmatz and her team at BGU. May they go on to ever greater success so that so many cancer patients can benefit.

The best cure for cancer is early detection. Israeli researchers have now discovered breath and urine tests for the early detection of breast cancer:

A screening method that, more accurately and earlier, detects breast cancer by identifying biomarkers has been developed Ben-Gurion University of the Negev and Soroka-University Medical Center researchers.

The biomarkers are identified by using two electronic nose gas sensors for breath, along with gas-chromatography mass spectrometry to quantify patterns of substances in urine.

The new technology, using commercially available technology, has just been published in the journal Computers in Biology and Medicine.

“Breast cancer survival is strongly tied to the sensitivity of tumor detection; accurate methods for detecting smaller, earlier tumors remains a priority,” says Prof. Yehuda Zeiri, a member of BGU’s department of biomedical engineering. “Our new approach utilizing urine and exhaled breath samples – analyzed with inexpensive, commercially available systems – is noninvasive, accessible and may be easily implemented in a variety of settings.”

What a beautifully simple diagnostic tool. Kol hakavod to Prof. Yehuda Zeiri and the research team at Ben Gurion University which has turned into a powerhouse of biomedical research and advances.

And now for something completely different. With the violence in Gaza having died down, but the vile anti-Israel media coverage still continuing, it is both important and heartening to watch this video of Israeli Arabs of all religions talking about their pride in being Israeli. Watch and share!

I’m sure that a good part of these loyal citizens’ love for their country stems from the optimistic and hopeful nature of Israel (something which the anti-Israel media have no concept of). Watch this beautiful short video by former UK Chief Rabbi Jonathan Sacks, made in honour of Yom Haatzmaut but relevant every day of the year:

And on this hopeful and heart-warming note I wish you all Shabbat Shalom!