After this week’s difficult events, it’s with a sigh of relief that I bring you today’s Good News Friday installment (all links courtesy of  reader “Reality”).

Let’s start with some cheering international news. Despite Britain’s annoying “neutrality” on Israel’s fight with Hamas in Gaza, it is very encouraging to hear that Israel and Britain have signed a scientific cooperation agreement:

The agreement will expand scientific cooperation between Israel and Britain to promote science, technology, and innovation. The agreement was signed as part of the International Ministerial Conference, in which science ministers and senior delegations from more than 25 countries participated.

Akunis explained, “The new agreement opens additional opportunities for Israeli researchers to cooperate scientifically with their British counterparts. The British Minister’s arrival in Jerusalem attests to the great desire to cooperate with Israel and to our being a science and technology superpower with whom many seek cooperation and closer ties. This is a clear and strong message against organizations calling for academic boycott of Israel.”

The goal of the agreement is to promote scientific research exchange by expanding cooperation and research among government policy makers, authorities, research organizations, and institutions of higher education.

The sentence I highlighted is almost as important as the agreement itself. The fact that 25 countries participated in the international Ministerial Conference disproves the persistence claim that Israel is isolated. Since this conference took place in the same week as the fighting in Gaza, this shows Israel’s standing is as strong and respected as it has ever been. Kol hakavod to all those involved in this important agreement.

Staying on the scientific theme, but linking back to the Bible, here is a fascinating story at the Times of Israel on the history of the Tekhelet (or techelet) – the blue dye used for dying tzitzit, the ritual fringes on garments worn by Jewish men:

It was the color of the sea, the sky, the divine sapphire-hewn Throne of Glory, according to the Tannaite sage Rabbi Meir. It was a color used in the Jewish temples, the hue of its high priests’ robes, and the shade of the blue tassel that the Bible commands be affixed to one’s garments.

But starting in the seventh century CE, the source of the natural dye to produce the biblical tekhelet [blue] — as well as its royal purple counterpart, argaman  — faded from history for hundreds of years.

Long sought by Jews to revive the ancient practice of wearing a fringe of techelet, the revered colors were also the subject of other Ancient Near East cultures’ fascination and ritual worship and the source of a hugely prosperous ancient dyeing industry, according to a new exhibit at Jerusalem’s Bible Lands Museum, “Out of the Blue,” which is set to open on June 1.

It… underlines finds linking the elusive techelet and argaman with the Murex trunculus shellfish and notes Jewish scholarly efforts to revive the pigment based on a cryptic Talmudic description of the hilazon snail that produces the sacred ink.

Set to be exhibited for the first time, for example, are punctured, ancient Murex trunculus snail shells, excavated at the Tel Shikmona site in northern Israel and dating back to the 10th-7th centuries BCE, according to a curator at the museum, Yehuda Kaplan. 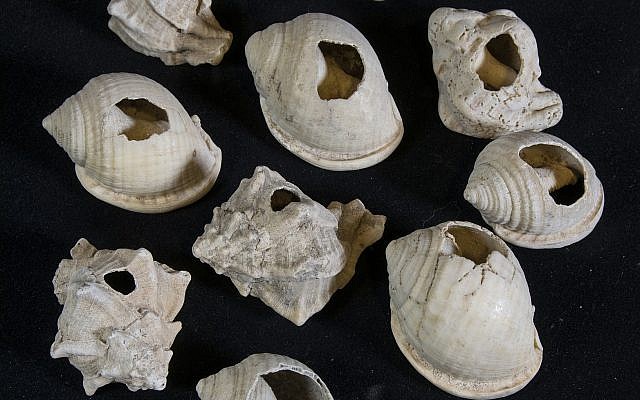 …. Since the 19th century, Jewish scholars have searched for the source of the techelet, most prominently pitting Rabbi Gershon Hanokh Leiner — the Hasidic Radzyner rebbe, who maintained it was derived from a squid — against Rabbi Isaac Herzog, who would go on to become Israel’s first chief rabbi, and who disputed Leiner’s claim in his 1914 doctoral dissertation. 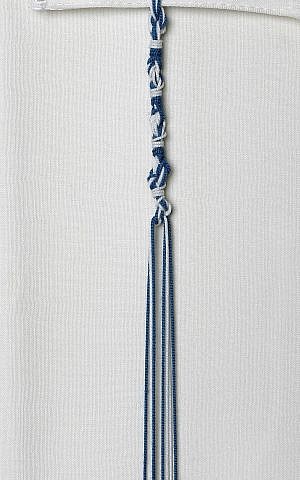 (Though the modern day ritual use of techelet drawn from the Murex trunculus has made inroads in some Orthodox circles in recent years, it remains the subject of rabbinic debate and has not been unanimously adopted.)

Herzog — the grandfather of Israel’s opposition leader Isaac Herzog — leaned toward endorsing the Murex trunculus as the source of the Biblical techelet, but was stumped by one little detail: The snail produced by the dye appeared to be strictly purple, said Sterman, who was preparing a demonstration of the dye process from the snail gland for the group of journalists at the museum.

That was a discovery that would take until 1985 to unravel, Sterman related while stirring the dye concoction, when chemist Dr. Otto Elsner of Israel’s Shenkar College of Fibers “accidentally” stumbled upon the answer: Exposed to ultraviolet light and subsequently oxidized, the color of the dye changes to blue.

Read the whole article. From the archeological search for the source of the dye, to the modern day discoveries across the entire region, it’s fascinating!

And since we’re on the subject of blue, here’s something else blue that popped up in Israel this week – a very rare blue whale paid us a visit at the Red Sea! It is the first time such a creature has ever been documented in Israel so it was greeted with huge excitement:

A blue whale, considered the largest of all whale species, was spotted in a first ever documented visit in the Gulf of Eilat and the Red Sea Tuesday, Israeli marine researchers reported. 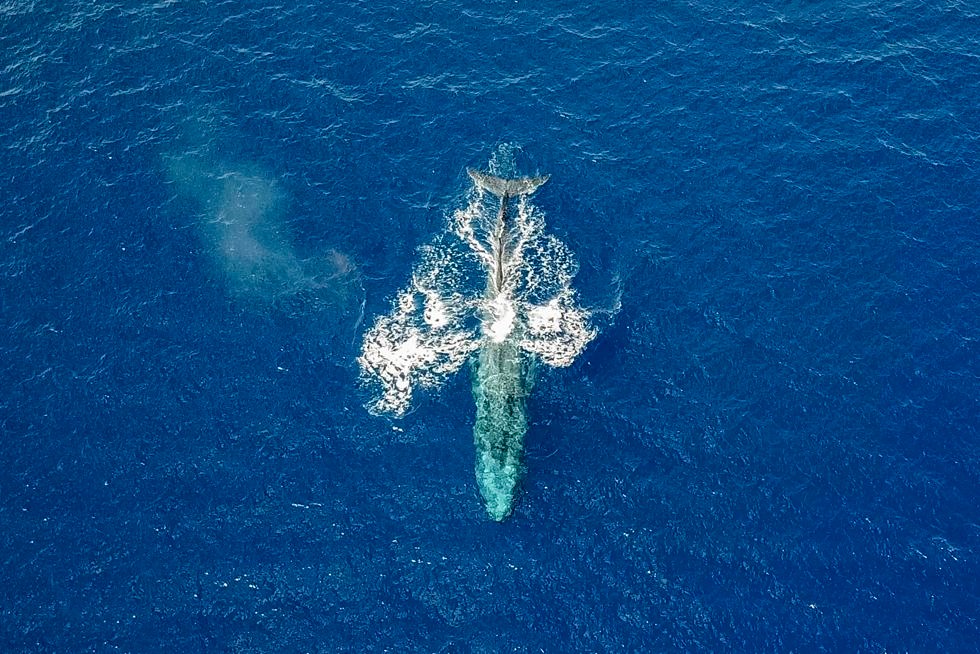 Whales of this kind can reach up to 33 meters and weigh up to 130 tons. Up until 1965, hundreds of thousands of the species’ members were hunted commercially, until a worldwide ban prevented their extinction.

Today, according to International Union for Conservation of Nature data, less than 12,000 of the endangered aquatic mammals exist in the wild.

Dafna Feingold, who coordinates aquatic mammal data for the IMMRAC, noted that, “This is the first piece of evidence of the existence of a new species in the Red Sea. It’s the first time unequivocal photographic proof of a blue whale in the Gulf of Suez and the Red Sea came to light.” 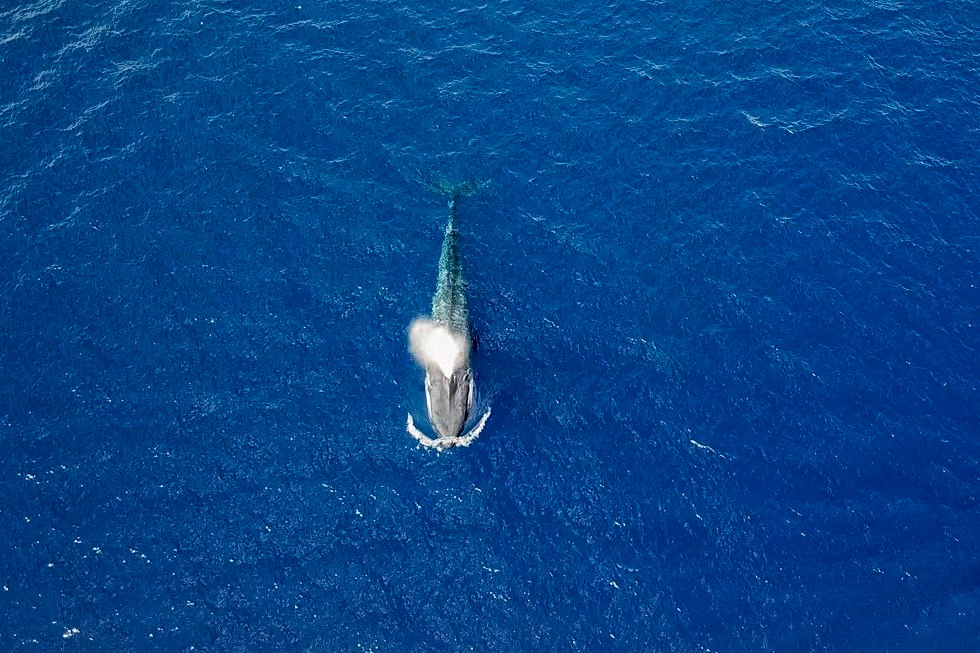 Blue whale in the Gulf of Eilat (Photo: Marcos Schönholz)

Feingold said the specimen seems to have not reached its full size yet, and that its arrival in Israel did not necessarily mean it was in poor health condition. She added that while it was possible a blue whale may have previously visited Israel’s shores, this was the first time one was actually documented.

“The reason they aren’t often seen in our region is that they don’t have enough food (here), and I imagine it will be making its way to the southern Red Sea before long,” she explained.

Dr. Assaf Zvuloni, head biologist of the national marine reserve in Eilat, added that, “Israel and the gulf of Eilat were a long way away from its area of distribution. The size of the specimen was observed to be at least 20 meters, based on measurements comparing it to IMMRAC’s pier.”

Yoav Lindman, a doctoral candidate from the Inter-University Institute for Marine Sciences in Eilat, set sail with a team from the institute to try and locate the whale.

“I watched whales abroad, but this feels infinitely lucky to see one in Israel. There aren’t immense amounts of plankton for it to eat, and we saw him continuing south until it left to search for food elsewhere,” he concluded.

Dafna Feingold added that when examining the photographs it was also apparent it was a very slim whale. “Usually a layer of fat and muscle exists around the spine. Photos, however, showed the spine protruding with a concaving towards the inside of the body on both ends. There wasn’t any fatty mass you’d expect to see,” she noted.

Members of the Nature and Parks Authority accompanied the whale as it progressed outside of Israel’s borders, and bid it farewell as it continued its travels towards Egypt.

Watch these videos of the whale swimming in the Red Sea waters.

What a beautiful, magnificent animal! I hope it made it safely to friendly waters and found enough food to keep it going back to its home territory.

Isn’t it strange that G-d provides us blue dye thruogh snails, and a beautiful blue whale to enhance our wonderful nature. We certainly are not “feeling blue” – at least not in the accepted sense of the word – but are “enjoying blue” instead.

With these fascinating pictures in mind, I wish you all a Shabbat Shalom!