Israel walks a tightrope in Syria between Iran and Russia

While rockets and flaming kites are continuing to rain down over our southern border, it’s worth a look at what has been happening on the other side of our other major border in the north.

Politics makes strange bedfellows, and enemies of our enemies make even stranger alliances. One of the most peculiar arrangements recently (it can’t really be called an alliance) is that between Israel and Russia in Syria. 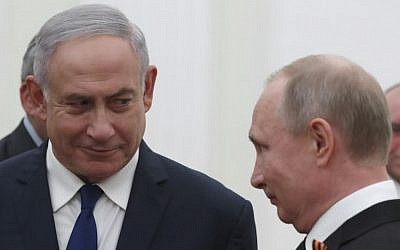 Russian President Vladimir Putin, right, meets with Prime Minister Benjamin Netanyahu at the Kremlin in Moscow on May 9, 2018. (SERGEI ILNITSKY/AFP)

Russia is determined to secure for itself a warm-water port in the Middle East and Syria looks like a likely possibility. For that reason Russia has been supporting Assad, seeing him as the most likely actor to keep control of the coastal region. Iran meanwhile has been “helping” to eradicate ISIS and other rebel forces, though some of these rebel forces are not aligned with ISIS but rather with the Western alliance. The Americans, as so often happens, have been caught in the middle.

Russia has tolerated Iranian action in Syria until now because they saw it as useful to their own aims. Lately though Russia has become wary of Iranian attempts to gain hegemony over the entire area.

In this they are joined by Israel which is determined to keep Iran out of Syria at all costs. We do not want an Iranian land-bridge stretching all the way from Iran to the Mediterranean.

This is the reason for Israel’s repeated (though mostly not confirmed) bombing expeditions of Iranian bases and weapons production or storage facilities, and convoys to and from Iranian proxies like Hezbollah. Lately these have been “upgraded” to targeting personnel as well as just buildings. On Monday night Israel allegedly killed a Hezbollah commander in an airstrike

The complexity of these operations arise from the need to walk between the raindrops with Russia, having to be careful not to tread on their toes or bomb their own facilities while making sure that Russia in turn does not attack Israeli aircraft. This is one of the prime reasons for Netanyahu’s visit to Moscow in early May, ostensibly to attend the Russian Victory Day Parade, but in reality, or in addition, to coordinate positions in Syria.

Whatever one thinks of Netanyahu, he has shown incredible statecraft in keeping Russia satisfied and quiet while being allowed almost free rein to operate in Syria.

Here are the latest headlines about what has been happening in Syria:

Obviously the primary motivation of Israel is to keep Iranian forces out of Syria in its entirety.

Prime Minister Benjamin Netanyahu said Israel rejects an Iranian military presence in any part of Syria, after Russia said only Syrian regime troops should be in the south of the country, but appeared ready to allow Iran to maintain a foothold in other parts of the country.

The Russian statement on limiting Iran and proxies loyal to it is being interpreted as a likely nod to Israeli concerns over Iran’s activity on its northern border.

“Regarding Syria, our position is clear: We believe there is no place for any Iranian military presence in any part of Syria,” Netanyahu said Monday at his Likud party’s weekly faction meeting.

This was in apparent reaction to Russia’s otherwise very welcome statement that “only the Syrian army should be present on its southern border“:

Lavrov’s comments, made at a press conference in Moscow, apparently referred to areas including the Syrian  Golan Heights region abutting the Israeli Golan Heights and the border with Jordan, and indicated that Russia was open to Israeli demands that Iranian forces should be kept far from Israel’s borders.

The area is currently held by various rebel groups and Israel has accused Iran of trying to establish a presence in the area. Israel also accused Iran of firing a salvo of rockets at Israel from the area earlier in the month.

Despite these cooperative words from Russia there was a tense moment when Russian jets reportedly intercepted Israeli planes over Lebanon. 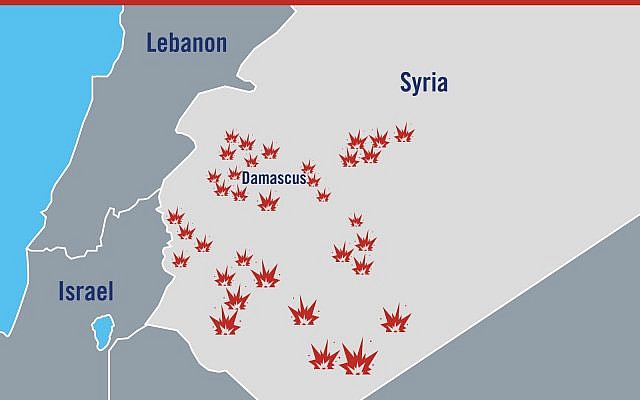 An illustrative map showing the general locations of Israeli strikes in Syria in response to a presumed Iranian attack on the Golan Heights on May 10, 2018. (Israel Defense Forces)

However, this has not prevented Israel from (allegedly, the IDF rarely confirms any activities over the border) bombing strategic targets across Syria, particularly Hezbollah and other Iranian targets (including, as I said above, killing a senior Hezbollah commander stationed in Syria).

When will we see the end game and final status in Syria, and what shape it will take, is anyone’s guess at the moment. It depends on Russia and Iran now, with Israel watching like a hawk from its borders and taking action when necessary.