Israel and its supporters are up in arms about the proposed friendly football match between Argentina (captained by Lionel Messi) and Israel being cancelled.

Tempers are fraying at thought of another high-profile boycott of Israel, particularly as we are already suffering an onslaught of hostile media attention concerning the violence from Gaza. Of course the BDS bigots have hyped up the cancellation as they jumped on the cancellation as “proof” that Argentina is disgusted at Israel’s “war crimes”.

From the above ToI link:

In the face of intense Palestinian pressure, Argentina has decided to pull out of a highly anticipated soccer match against Israel, days before Lionel Messi and co were scheduled to be take the pitch in Jerusalem, media reports said Tuesday.

The team decided to nix the game both over mounting pressure from pro-Palestinian groups and concerns over security for the Jerusalem match, the Buenos-Aires based Clarin daily reported. 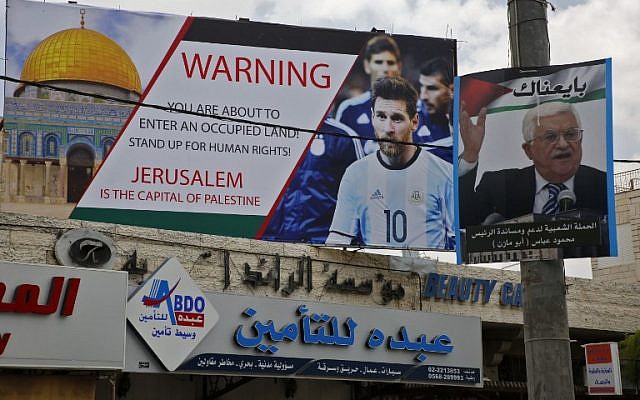 a poster erected Hebron calling for a boycott of soccer star Lionel Messi (l) next to a portrait of the Palestinian Authority President Mahmoud Abbas. (AFP PHOTO / HAZEM BADER)

If the game is canceled, it would represent one of the biggest successes of the pro Palestinian Boycott Divestment Sanctions movement in recent years.

Palestinian boycott groups welcomed the news, saying that Israel had been trying to “sports-wash its crimes against the Palestinians.”

The Palestinians did what they have always done best: threaten mayhem, violence and extortion in the best traditions of the Mafia:

The Palestinians on Monday threatened to torpedo the Latin American country’s bid to host the 2030 World Cup if the match went ahead. Last week the head of the Palestinian football association Jibril Rajoub had urged Arab fans to burn their Messi shirts and posters if the game went ahead.

“It is with regret that we hereby declare that, should the Argentinian National team continue its plans to play in Jerusalem, we will launch a worldwide campaign to question Argentina’s eligibility to host the FIFA World Cup 2030,” the Palestinian Football Association said in a statement.

On Sunday Rajoub called on Messi not to play in the match and urged fans to burn their shirts if he does.

At a news conference in the West Bank city of Ramallah he told journalists he had written to Argentina’s government asking that Messi not take part in the June 9 friendly.

“This match has become a political tool,” Rajoub said in Arabic.

Just to remind you, Jibril Rajoub is no peace-loving football official and is in no position to preach to Israel or anyone else. He has been a member of the PLO since his youth and was a major terrorist leader, spending years in prison until he was released in exchange for Israeli hostages.

As we can see from the above, even a mildly closer inspection of the facts shows that the primary reason for the cancellation is because the Argentinian team were threatened with violence and even death if they took part in the match.

Pro-Palestinian death threats "WORSE the ones they got from ISIS" says Argentinian FM @JorgeFaurie. Because nothing says, "support our peaceful cause" like "we will kill you."https://t.co/kbmJ9831Ad

Head of Argentine Football Association, Claudio Tapia, sets the record straight on threats and wish to play in Israel in the future. The Palestinians, he says, are selling the cancellation as "not coming because I support" BDS, while the truth is "not coming because I'm afraid." pic.twitter.com/jPq5HHp8cc

There were many tweets highlighting the sad capitulation of Argentina to the Palestinian threats.

Once again, palestinian threats, intimidation and bullying win out. The Argentina Football Association is just following the template of capitulation we have seen from countries around the world https://t.co/8DLZGw5dFn

First they want to cancel because there are rocket attacks on Israel and terror-security threats in Jerusalem-and then they cancel to stand in solidarity with these same terror threats and rocket launching people..

However, I can’t honestly say I blame Argentina. Why should they take the risk of violence and death in order to play in a friendly match halfway round the world on the eve of the World Cup? After all, they know full well the danger of Palestinian terrorism, having seen it on their own soil in the bombing of the Jewish AMIA cultural center in Buenos Aires in 1994. This act itself was covered up by the Argentinian President Kirchner, which, when revealed, led to the murder of the Jewish prosecutor Alberto Nisman.

As a family member remarked, “Now we are shunned by the Argentinian football team, the same Argentina who sheltered Eichmann & co, who have never truly investigated the Hezbollah bombing of the Jewish Cultural Center in Buenos Aires, and who invaded The Falklands while attacking civilians without discrimination”.

Indeed, and yet, we are not so much being shunned as being the collateral damage from Argentina’s capitulation (justified or not) to the Palestinians’ threatening behaviour.

Interestingly, and encouragingly, the Argentinian press have been scathing about the cancellation of the match for political reasons: (this and the next link via DavidinPT):

In an opinion piece published in Clarin and featured at the top of the publication’s website, journalist Miguel Winazki suggested it was time to “abolish soccer and lift the World Cup in hypocrisy.”

In order to be consistent in its decision to avoid controversy abroad, Winazki wrote, the national team should also “not play in Russia, because the Kremlin was behind the decision to launch military incursions in Syria in complicity with the tyrant Bashar Assad, causing the deaths of thousands of citizens of that country.”

“Strictly speaking, and of course according to this line of conduct, neither should the national team ever appear to play in Palestine — the Gaza Strip is dominated by the terrorist group Hamas, and at war with the Palestinian Authority that rules the West Bank.”

Winazki finally offered: “Let’s not play with anyone. Nor against ourselves, since we cannot even deal with our cases of corruption. We can abolish soccer, become a moral beacon, and raise the world cup of universal hypocrisy.”

Another leading piece in the paper titled “World Champions in the Absurd” mocked the team for “only now” finding out about the problems of the Middle East conflict.

Other Argentine team members play in England “where just a year ago a bomb exploded on the London Bridge,” he said, and in Paris, where the Stade de France soccer stadium was one of the targets in the November 2015 terror attacks on the city.

“Now they’ve been warned that Jerusalem is dangerous? Is it more dangerous than other cities? By how much?” Lagares mused.

Michael Freedman, a blogger in the Times of Israel also urges us not to cry for Argentina:

The coach has repeatedly stated that he did not want to travel to Israel to play this game, for reasons of logistics and exhausting his players right before the World Cup. He wanted to host it in Barcelona, where the team are training, instead of having to fly to Russia via Israel for this game.

Higuain and the other Argentine players have never called for this game to be cancelled or boycotted on political grounds as far as I can tell. Their statements relate to the direct threat level by Palestinians towards them and their families, and the same footballing reasons as the coach.

The Palestinian FA resorted to blackmail against Argentina by threatening to undermine their bid for the 2030 World Cup if the game went ahead.

The head of the Palestinian FA is Jibril Rajoub, a multiple-convicted violent terrorist who is on record as having said that if the Arabs had nuclear weapons, they would use them right away — a direct threat of genocide. He is rumoured to have personally summarily executed Hamas members in the West Bank in the 1990s (not that I’m shedding too much of a tear for that). And they accuse Israel of “sportwashing”!

My analysis: if this is the kind of “victory” that the Palestinians and the BDS movement have to resort to, it demonstrates their frustration and desperation.

The world has moved on.

Threatening acts of violence against players and their families, holding a World Cup bid to ransom, repeated attempts to have Israeli sporting institutions thrown out of global bodies, hot on the heels of similar efforts to derail hosting next year’s Eurovision — this is a desperate attempt at a cultural intifada, and it’s a sign of a movement that has lost its core arguments, and would rather continue to evade taking responsibility for the welfare of its own people by deflecting criticism with cheap publicity stunts at the expense of a third country.

Macri’s Argentina sees Israel as an ally and a strategic partner for economic development. Once the fuss dies down, Argentina-Israel bilateral trade will carry on growing from last year’s $300m, and the citizens of both countries will enjoy reaping the benefits of this relationship.

BDS can rant and rave like Rumpelstiltskin but they can’t change the fact that they have had almost zero impact on Israel’s economy or on Israel’s international standing. They jump onto any bandwagon in order to achieve their racist aims of destroying Israel, and the fact that they see nothing wrong with allying themselves with terrorists speaks more about themselves and their nefarious character than any public diplomacy effort from Israel.