While those of us lucky enough to live in the centre or north of the country enjoyed a pleasant Shabbat, other Israelis were not so lucky. The residents of the south, in the Gaza “envelope”, spent most of Friday night and Shabbat running in and out of their bomb shelters as Hamas dramatically escalated the violence, firing almost 200 rockets and mortars at Israel. Among other targets, a children’s playground, a home and a synagogue were hit in Sderot. Three civilians were injured in the house and several more suffered shock.

It all began when an IDF officer was injured by a grenade thrown over the Gaza border fence on Friday, for which the IDF retaliated. That is when Hamas upped the ante:

Terrorist groups in the Gaza Strip launched over 174 rockets and mortar shells at southern Israel throughout Saturday, the majority of them exploding in open fields, but with some landing inside Israeli communities, injuring three people and damaging buildings, officials said.

In response, the Israel Defense Forces launched its largest bombing campaign against Hamas targets in the Strip since the 2014 Gaza war, hitting dozens of targets, including two border-crossing attack tunnels and an urban combat training facility, the military said. 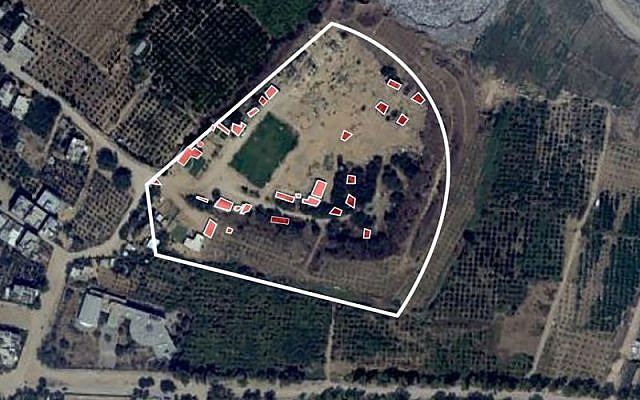 An aerial illustration of the Hamas Battalion headquarters in Beit Lahia. (IDF Spokesperson)

According to the Hamas-run Gaza health ministry, two Palestinian teenagers were killed in the Israeli strikes — in a building over a Hamas tunnel — and 25 others were injured by shrapnel.

From 1:30 a.m., over 174 rockets and mortar shells were fired at southern Israel from Gaza. The majority of them, well over 100, landed in open fields. Over 30 of them were intercepted by the Iron Dome missile defense system. A number landed within the fences of communities in southern Israel.

The three Israelis were wounded when rockets hit a home and a synagogue in the border town of Sderot. They were evacuated to the hospital in moderate condition.

A number of other projectiles that landed inside communities in the Eshkol region of southern Israel caused light damage to buildings and infrastructure. In some communities, the mortar shells knocked down power lines, causing temporary outages, a spokesperson for the regional council said.

“A team from the regional council and the electric company fixed the damage immediately, under continued mortar fire,” the Eshkol region spokesperson said.

Here are some tweets detailing the rocket attacks:

3 people were injured when a rocket from Gaza hit this home.
Credit @israelpolice pic.twitter.com/dAOG8WoGcl

Major Keren Hajioff reporting from a synagogue hit by a Hamas rocket.
Yes, you read that correctly. pic.twitter.com/GcUuLSeIGs

StandWithUs have a short video which summarizes the weekend’s events:

Unbelievably, or rather I should say following the usual pathetic pattern, instead of continuing to pound Hamas into the ground, the Israeli government began negotiating with mediators to get Hamas to stop its rockets and incendiary kites and balloons. As I commented on my earlier post, I can’t even begin to tell you how furious I am at our leaders who at the moment couldn’t lead us out of a paper bag. Hamas have been bombarding Israel with over 200 rockets over Shabbat and what have our leaders done?? Negotiated a ceasefire, that’s what!!! With bloody terrorists!!! What the HELL are they thinking? The IDF has been bombing empty buildings and tunnels instead of assassinating the entire Hamas leadership. They KNOW where they are and where they’re hiding the cowards, why the HELL are we not killing them?

What is the point of a ceasefire?? So they can go back to flying incendiary kites and balloons and burn the last bits of Israel that they haven’t burnt already?

In answer to my furious but impotent ranting, the Times of Israel’s Avi Issacharoff explains that it is all realpolitik. Israel has Iran on its mind, and the Gaza kites won’t change that:

But in practice, the IDF bombardment was an opportunity for Israel to destroy Hamas’s cross border tunnels it has long known about, and an effort to change the status quo with the Strip’s rulers regarding the increasing arson balloon and kite attacks.

There were those in Israel and in the IDF who believed that bombing empty Hamas facilities would cause the organization to panic and order its members to stop flying incendiary devices over the border that have burned thousands of acres of forests and agricultural fields in recent months. In addition, Israel hoped the strikes would appease residents of southern Israel and right-wing politicians who have been demanding a heavier response to the increasing arson attacks.

It’s doubtful the arson kite phenomenon will be stemmed, however, and thus the demands for action will only intensify.

Hamas was less than enthusiastic about the Egyptian-brokered ceasefire deal reached on Saturday. When it was informed the deal was going into effect, the terror group launched dozens of rockets at Israeli communities on the other side of the border to register its discontent without completely refusing to accept it.

And everyone knows — Israel, Hamas and Egypt — that the next round of fighting is on the horizon, and that the reality in Gaza is unlikely to change significantly in the wake of the weekend violence.

The Israeli politicians who are quick to announce the government must not tolerate the ongoing “kite terrorism” are not telling the public the truth.

Firstly, the kites are not the most urgent security threat facing Israel but more like third or fourth down that list. Gaza has been downgraded, and is now regarded to be a less critical threat to Israel than the one posed by the Iranian military along the northern border in the sunset of the Syrian war.

So long as Iran is trying to entrench itself near the Golan border, it’s doubtful the reality for the Israeli residents living near the Gaza border — where kites are sparking multiple fires every day — will radically change in the near future.

Secondly, Israel — though politicians from Prime Minister Benjamin Netanyahu’s government generally refrain from saying this in public — wants to ensure the survival of Hamas in Gaza. Not out of affection for the organization, but because the alternatives to that terrorist group ruling the Strip are either complete chaos or Israel re-occupying Gaza and ruling over its 2 million residents.

This may very well be true, I have no reason to doubt it. Nevertheless it is very bad politics from Netanyahu and his officials to a) not explain the situation to the citizens of the country, and b) most important, that he has not seen fit to even visit the south to express his sympathy. He is antagonizing his core voters by not showing any empathy beyond bombastic statements from the safety of Jerusalem, and all the realpolitik in the world will not help him if he is not voted in in the next general elections.

He should listen to the mayor of Sderot who called on Netanyahu to visit the south: and watch out for his political rivals who have been doing just that:

“I call, from here on, the prime minister and the cabinet ministers to be with the residents, to go down to the South and hear the sounds of their hearts at the end of the most difficult week that has been here since Operation Protective Edge,” Davidi said.

“Our feelings about the cease-fire are very difficult. It is Hamas who decides whether to open fire or to cease fire and not the State of Israel,” he said.

Zionist Union Leader Avi Gabbay also visited Sderot and spoke with the chairman of Sderot’s youth council Dvir Sasi, who told him that his seven-year-old neighbor was screaming that he didn’t want do die. “This is what the prime minister would have heard if he had bothered to come,” Gabbay said.

Agriculture and Rural Development Minister Uri Ariel visited the family’s house in Sderot on Sunday morning and sent his well wishes to the family. “I call from here to the prime minister to take serious steps and not to let Hamas dictate the agenda,” he said.

Knesset Speaker Yuli Edlestein visited the home of the Buchris family, as well as the Rosenfeld family home, which was also harmed by projectiles.

“Hamas must not be allowed to change the rules in the region. We must act decisively against the heads of the organization, whose sole purpose is to harm us,” he said. “The solidarity between the residents here in Sderot is admirable, and it is even more evident in the difficult events we experienced over the weekend. I thank Mayor Alon Davidi for the spirit and the support he and his team give to the residents.”

Later, Edelstein visited the Sderot Trauma Center, which was established in the city after Operation Protective Edge.

Education Minister Naftali Bennnett also visited Sderot, and said: “Residents of Sderot and the Gaza envelope are entitled to security like any citizen of the State of Israel. We will oppose any cease-fire that allows Hamas to rearm for another round. This is not a cease-fire, it is a free pass for more rounds.”

“The residents of Sderot and the surrounding area tell us: ‘We are prepared to take it if you solve the problem.’ Therefore, all kinds of temporary truces on behalf of Hamas are unacceptable to us. This is not the way. The way is only through force, only through a thorough treatment of Hamas,” Bennett concluded.

Maybe this is why earleir today, after the ceasefire had a chance to take hold (sort of) the security cabinet decided – FINALLY – that the IDF should respond to all incendiary kites and balloons rather than simply sending warning shots. I simply cannot understand why this was not done right from the start:

#Breaking: At least one casualty after an Israeli drone fired a missile at a group of kite launchers at the fence near Beit Hanoun moments ago #Gaza

There are two injuries from the incident and each were evacuated to the Indonesian hospital in northern Gaza.

There was an added bonus as a rocket launching terrorist blew himself and his son up without the aid of the IAF:

The 35 yr-old commander of an Al-Aqsa Marty’r Brigade missile unit blew himself up, and killed his son while assembling a terror-rocket meant to have been launched at Israel. https://t.co/U4suJ9tg7y

However, with the escalation of tensions, the army is not taking any chances and has moved an Iron Dome battery into Gush Dan (the Tel Aviv region) in the center of the country, reinforced batteries in the south as well as calling up some reserves.

Realpolitik aside, I am still of the opinion that if the IDF had been permitted to fire back with deadly force at the incendiary balloon and kite launchers right at the beginning, we would never have reached this perilous situation, and the government could have continued devoting its full attention to Iran.

I am sorely disappointed at our leaders’ short-sightedness.