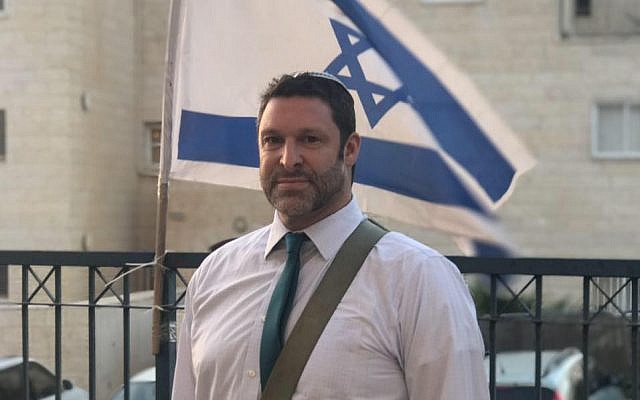 The most dreadful news reached us earlier today when we learned that Ari Fuld, the gregarious, prolific and always energetic blogger and pro-Israel advocate Ari Fuld was murdered by a low-down terrorist at Gush Etzion junction today.

Although I never had the privilege of meeting Ari, I followed him closely on social media and hoped to meet up with him one day and maybe join in one of his famous tours fo the Shomron. Sadly this will now never come to pass.

The media, mainstream and social, are full of eulogies and reports abotu Ari’s life. For the sake of brevity and clarity I will post just a couple here.

The Times of Israel: Ari Fuld mourned as a larger than life hero, champion for Israel:

Ari Fuld, the American Israeli man who was stabbed to death in a terror attack on Sunday, was mourned in an outpouring of social media tributes throughout the day, with friends and ideological opponents alike eulogizing the Israel advocate and former karate instructor as an unflinching champion of the Jewish state and fearless fighter to the end.

Fuld, a 45-year-old American-Israeli father of four from the Efrat settlement, was stabbed in the back by a Palestinian terrorist shortly before noon on Sunday outside a shopping mall at the nearby Gush Etzion Junction. Despite his wounds, Fuld pursued and shot his attacker before collapsing to the ground.

Fuld worked at Standing Together, a non-governmental organization that provides support to Israeli soldiers. He also described himself on his website as an “advocate for Israel, [who] speaks to communities throughout the globe.”

Fuld was well known for his social media posts defending Israel and its military. He was scheduled to leave in the coming weeks on a speaking tour in the United States. In addition, he reportedly was about to launch a new Israel advocacy website in English.

Heartbroken by the news of the murder of a true patriot, friend & Israel advocate Ari Fuld, in Gush Etzion this morning. Ari was stabbed by a Palestinian terrorist and succumbed to his wounds. Thoughts are with the Fuld clan and especially his brother @HilzFuld pic.twitter.com/eEUbnR1pMJ

Very sorry to hear that my friend and IDF Paratrooper Ari Fuld was murdered today in Gush Etzion. A soldier to the last he shot the Islamic terrorist that stabbed him in the back before succumbing to his wounds. pic.twitter.com/rWapRflwEr

Fuld’s killing pierced the community of pro-Israel advocates and other online activists, who recalled him as dogged in his support for the Jewish state.

Journalist and political consultant Annika H Rothstein described Fuld as “a lion, soldier of Israel and a man who was always the first to support his fellow Jews around the world, be it practically or spiritually.”

Laura Ben-David wrote that she “disagreed often and publicly” with Fuld. But, she added, “I know it was only his incredibly deep caring for Israel and the Jewish people that made him so determined.”

Activist Shoshanna Keats-Jaskoll said she was “utterly devastated” by the news.

“I argued with Ari, but, I also laughed with him,” she wrote on Facebook. “I shared his passion for Israel, for helping agunot [women who are denied a religious divorce by their husbands], and for family. We had numerous chats on these topics and while he could be tough online, he was a real mensch one on one.”

“Oh my Allah, I can’t believe the news, my Facebook friend, whom I chatted last month Ari Fuld, an Israeli hero, is no more with us,” he wrote.

Fuld was also a prominent member of the National Union party, and served on its Central Committee. National Union is part of the Jewish Home faction in the Knesset. Ari’s brother Eitan is the spokesman for Jewish Home MK Betzalel Smotrich.

Watch this shocking (and slightly graphic) video to see Ari Fuld Hy’d stagger, then regain his balance after being shot, and then aim and shoot the terrorist. What a hero! And what a shame his aim was off and the terrorist is still alive:

A 17 y/o Palestinian terrorist, brainwashed to murder Israelis since he was a child, stabbed today Ari Fuld, a father of 4, to death.

Although he was stabbed from behind, Ari (lion in Hebrew) fought like a lion. He chased the terrorist & shot him before collapsing. He was a hero pic.twitter.com/7Mj5UxmW76

Israeli-Australian blogger Israellycool was a close friend of Ari Fuld and his brother Hillel, and he has written a very moving post:

It is with a heavy heart that I post this: my good friend Ari Fuld was today murdered by a palestinian terrorist.

He was stabbed by the terrorist, yet managed to chase and shoot him, before collapsing to the ground.

Typical Ari, a true hero of the Jewish people. Not coincidentally, his name Ari means “Lion.”

Ari and I connected through our shared love of Israel and our fellow Jews. He was a passionate advocate who loved debating those who seek to undermine us, and would always be beholden to the truth – political correctness be darned! And while my approach is slightly different (I prefer to be a bit gentler with my messaging), I always respected Ari and his devotion to the facts.

What gets swallowed up in all the news reports is the altruism, idealism and patriotism of Ari Fuld. Israellycool writes:

Until recently, Ari was a director of Standing Together, a non-profit catering to the different needs of soldiers, sending drinks, food, clothes, undergarments, and more to our soldiers in the field. When that ended, he started this Cool-a-Chayal campaign.

Ari was very excited about his plans to take his advocacy to the next level – which he shared with me – and expressed his desire to collaborate with me more in future. He would always offer to take me out for a beer – whenever I felt like it – knowing the difficult times I have been going through with my wife’s illness.

Unfortunately, I will never get to have that beer with Ari Fuld, the lion and hero.

Aussie Dave then added a video by Avi Abelow, another advocate for Israel and Ari Fuld’s partner in his Facebook page. Watch this wrenching video below (and get out your tissues):

Not only the blogging community is mourning Ari Fuld Hy’d. The Prime Minister and US Ambassador have also expressed their sorrow and shock at his murder:

Prime Minister Netanyahu lauded Fuld, a pro-Israel activist and member of the Efrat rapid response team, calling him an “advocate for Israel”.

“In the name of every citizen of Israel, I send my condolences to the family of Ari Fuld, who was murdered today in a terrorist attack in Gush Etzion,” Netanyahu wrote in a Facebook post Sunday.

“With his last strength, Ari fought heroically against the terrorist and prevented a greater tragedy. Ari was a wonderful father to four children. He was an advocate for Israel who fought to spread the truth about Israel. May his memory be a blessing.”

US Ambassador to Israel David Friedman issued a condemnation of the attack Sunday, and called Fuld an “American patriot”.

“America grieves as one of its citizens was brutally murdered by a Palestinian terrorist,” Friedman tweeted Sunday.

“Ari Fuld was a passionate defender of Israel & an American patriot. He represented the best of both countries & will be deeply missed. May his family be comforted & his memory be blessed.”

Fuld will be laid to rest Sunday night at 11:30 p.m. in the Kfar Etzion cemetery. He is survived by his wife, Miriam, and their four children.

Ryan Bellerose, the wonderfully outspoken Canadian Metis advocate for Israel, posted a notice for a Go Fund Me fundraiser for Ari Fuld’s family (his widow and four children). Please consider giving some of your Yom Kippur charity to this very important fundraiser.

May the heroic memory of Ari Fuld Hy’d be for a blessing. May Hashem avenge his death. May his family be comforted amongst the mourners of Zion and Jerusalem and may they know no more sorrow.

This Yom Kippur there will be another melitz yosher (pleader in our defence) in Heaven, but we would so much have preferred to keep Ari Fuld down here with us for longer.