The British Labour Party finally went off the deep end altogether during its annual conference in Liverpool a couple of weeks ago. From the reports coming out from certain sessions it is now clear that “Palestinianism” – the obsession about “Palestine”, a non-existent country with no connection whatsoever to Britain – is more important to Labour members than the more usual themes which are discussed in political conferences such as education, welfare, the National Health Service and Brexit.

Actually I’m not being completely fair. It was not the entire Labour Party which went off the deep end. It was one faction of the party, but which unfortunately has come to dominate the party as a whole. British Jewish activist Jonathan Hoffman explains in his blog about “The Lynching”:

The Palestine Solidarity Campaign has hijacked the Labour Party and the TUC. Its Chair, Hugh Lanning, was Deputy General Secretary of the Public and Commercial Services Union (PCS), one of the largest trade unions. With many Jewish members having quit Labour and many who remain choosing to stay away from Conference, there was no-one to speak yesterday to expose the lies. Israel hate has become the glue that keeps the Corbynite left together, the totem pole around which it rallies, orchestrated by 50+ year olds who remember the campaign against apartheid and make entirely false comparisons with it.

If you want to see this manipulation illustrated, look no further than the two photos below.

The first one shows the Israel lynching sessions yesterday (well done to Paul Wilkinson who pointed out from the podium that it was against the rules to bring the flags into the hall, especially when he wasn’t allowed to unfurl an EU flag earlier in the day). Contrast it with the second one, which shows the attendance at the International Briefing on Monday morning, with at least two Shadow Cabinet members on the podium to answer questions (Emily Thornberry and Kate Osamor – does anyone know who the other two are? Nia Griffith?). The hall is virtually empty.

The political blog Guido Fawkes illustrates the hypocrisy of the sea of Palestinian flags being waved during the debate on Israel, while European Union flags were banned at another event:

Earlier today stewards at Labour Party Conference told a delegate to stop waving an EU flag because “banners are not allowed on the conference floor.”

There were other horrific demonstrations of antisemitism, whether disguised as anti-Israelism, anti-Zionism, or outright Jew-hatred:

WATCH: Applause for member who blames "campaign of slurs and accusations of antisemitism" on "The Lobby" as depicted by the Al Jazeera documentary of the same name. #Lab18 pic.twitter.com/6sPfGVW8Ih

It must be noted that the TV documentary “The Lobby” (i.e. The Israel or Jewish lobby) mentioned by the antisemite in the video above was thoroughly debunked at the time as a piece of classic Jew-baiting by the British Press watchdog Ofcom and UK Media Watch amongst others.

Matters have reached such a head that Jewish Labour MP Luciana Berger needed a police escort at the conference because of death threats she has received:

A Jewish Labour MP was forced to rely on police protection at her party’s conference yesterday – as a colleague warned the anti-Semitism crisis could fuel the rise of Nazism in Britain.

Luciana Berger was accompanied by two police officers as she attended an anti-Semitism rally in Liverpool. Moderate Labour MPs lined up at the fringe event to demand that Jeremy Corbyn and senior union leaders take serious action to ‘drain the swamp’ in the party. 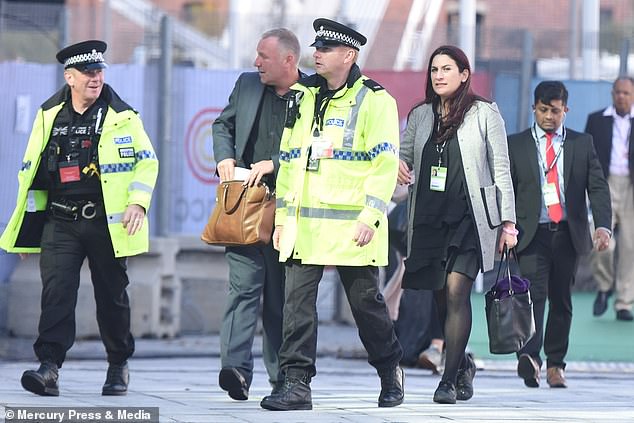 It came after the Labour leader refused to apologise for a series of controversial statements he has made about Jews and for his failure to clamp down on anti-Semitism.

On another day of shame for Labour:

Stella Creasy, the Labour MP for Walthamstow in East London, warned that unless the issue of anti-Semitism in the Labour ranks was properly tackled by the leadership, racism will fester.

Yet despite Ms Berger’s need for police protection, even that was mocked and denied by Labour “activists” (or should I say “fascists?):

Jewish Voice for Labour, which is most likely not Jewish and certainly does not act in favour of the Jewish community, also made fun of Jewish fears:

Jewish Voice for Labour reassures Jewish members that they are quite safe at conference by… secretly photographing them and uploading their pictures to Twitter. pic.twitter.com/zNb8wYTFLX

There has been quite a bit of push-back from both Jewish activists and the mainstream British press against the vile Jew-baiting on display at the Labour Conference.

Listen to what British Jewish journalist and political analyst Tom Gross has to say about the Labour Party conference and its Palestinian obsession:

Here is a nice graphic summary of his words:

And it was a pleasure to listen to Conservative MP Dominic Raab (who has a Jewish father) as he spoke at the Conservative Party Conference about the root of the trouble with Labour and its attitudes towards Israel and the Jewish People:

But at the end of all the discussions we still come back to the original question, what is it with Labour and the Jews? We can depend on Melanie Phillips to get to the crux of the matter as she posits that the destruction of Israel si the signature cause of the Labour Party:

The leader of Britain’s Labour Party, Jeremy Corbyn, has told his party’s annual conference that if he becomes Prime Minister he will immediately recognise a Palestinian state. Immediately. Why? What kind of priority is this for a British Prime Minister?

Labour delegates also voted to condemn Israel’s use of force against violent riots on the Gaza border, urge more UK funding for UNWRA, the UN agency for Palestinians, and back a freeze on British arms sales to Israel. And in a veritable sea of hatred of the Jewish state, they waved Palestinian flags provided for their debate on “Palestine”, which delegates had voted was a priority issue ahead of the NHS, Brexit, social care and welfare.

How come that’s such a priority?

So why has Palestinianism become the cause of causes? The answer is that the obsession is not with the fate of the “Palestinians”, whose lives in fact have been made wretched by their own leaders and the Arab world in general. The obsession is with the Jews.

The foundational aim of Palestinianism is to destroy the state of Israel and deny the historic right of the Jewish people to their homeland. That is what the “Palestinians” constantly proclaim in their speeches, maps and insignia, educational materials and media, and in their rejection of every single attempt to provide them with a “two-state solution” and their resort instead to terrorism and war.

In Judaism the people, the religion and the land are inextricably fused. The signature cause of the Labour party is therefore, in effect and despite the pious espousal of a “two-state solution”, the destruction of Israel and the denial of Judaism itself. This is the core reason why the party is unable to purge itself of the poison of antisemitism.

In a disgusting conference speech, Corbyn further protested “the ongoing denial of justice and rights to the Palestinian people”, declared Labour was “united in condemning the shooting of hundreds of unarmed demonstrators in Gaza by Israeli forces and the passing of Israel’s discriminatory nation-state law” and that “the continuing occupation, the expansion of illegal settlements and the imprisonment of Palestinian children are an outrage”.

No. The true outrage is the distortion, twisted thinking, selective reporting, blood libels and malevolence in those statements, and their consequent incitement to hatred not just of Israel but of its supporters too. The obsession, the falsehoods, the double standards, the singling out of Israel alone for this kind of malice, the denial to the Jewish people alone the right of national self-self-determination in their own historic national homeland (for that is the import of the attack on the “nation-state law”) – this is the “new” antisemitism, the application to Israel of the same techniques of vilification that have been applied to the Jewish people without remission down through the centuries.

In the light of all this, Corbyn’s professed hatred of antisemitism and his acknowledgement of the Jewish people’s “long and terrible history of persecution and genocide” culminating in the Nazi Holocaust was sickening.

This was waving the shroud of the Holocaust to sanitise his onslaught on Israel and Judaism. He ramps up his solidarity with dead Jews in order to mask the agenda of disempowerment, death and destruction embodied in the agenda of Palestinianism that he supports for the living Jews in Israel.

Read it all. It is depressing and alarming.

We can only hope that the British public have more common sense than what has been shown by Jeremy Corbyn’s acolytes, and that when it comes to election day, whenever that may be, Labour as it is now constituted, with Jeremy Corbyn at its head and steered by Momentum and Unite, will not come near to No. 10 Downing Street.