For months, along with dozens of other Israeli bloggers and advocates, I have been writing about the incessant arson attacks via incendiary kites and balloons by Hamas and its terrorist proxies on the south of Israel, which have led to 10,000 dunams of nature reserves, agricultural land, wildlife, and plant life being burnt to a cinder. In fact,according to this Israel Hayom report:

More than half of the Jewish National Fund forests in the western Negev have been reduced to ash as a result of the past six months of arson terrorism by Hamas operatives in the Gaza Strip, the JNF said Tuesday.

The arson attacks have lately escalated from weekly attacks which accompanied the murderous attempts to breach the Israeli border to several times daily attacks. The terrorists also burn masses of tires and use other smoke machines which are literally sickening Israeli citizens along the border, making their lives a dangerous misery.

Watching carefully, and learning from the government’s non-response, terrorists in central Israel have started launching similar balloons in the Modiin and Ramla areas. How long before such arson balloons start landing in downtown Tel Aviv and Jerusalem? On the other hand, maybe that would be no bad thing as it would (almost literally( light a fire under the seat of this government and force them to act.

Meanwhile, Hamas not having achieved its aim of provoking Israel into a full-blown attack, launched a couple of rockets, or rather missiles, at Israel last night. One of those rockets made a direct hit on a residential house in Beer Sheva, leaving the mother and three children in shock after they barely managed to run to their safe room. 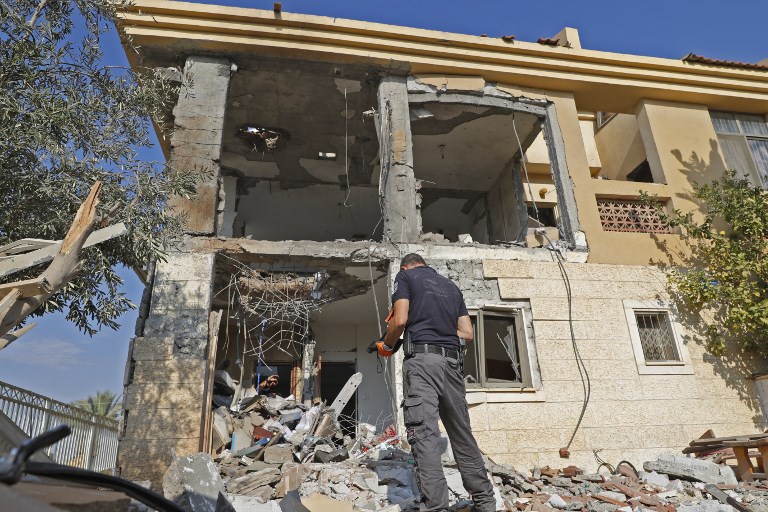 The Tamano family home in Beer Sheva, destroyed by a Hamas missile

The family are now temporarily homeless as everything they owned has been destroyed and have appealed for help. The government is stepping in with immediate assistance too:

I don’t have a home now,” said Miri Tamano, who managed to pull her three sons, ages 8, 9 and 12, into the apartment’s bomb shelter moments before the rocket struck. “[But] I have three children, and each one is the whole world,” said Tamano, a single mother who is raising the boys alone.

The explosion, which took place shortly before 4 a.m., knocked over several of the home’s walls and destroyed most of its contents.

“Because of her quick wits, only property was harmed,” Miri’s sister Ora told reporters Wednesday morning.

“My sister is a lioness,” Ora said. When the rocket sirens went off in the middle of the night, “she just grabbed the kids by force and dragged them to the shelter. That’s why they’re alive.”

The Prime Minister vowed all sorts of revenge and retaliation but beyond the usual air strikes it appears to be business as usual. Of more concern, the rockets in last night’s attack were bigger and heavier than what we have seen in the past. From the first link above:

In the predawn hours of Wednesday morning, a mid-range rocket from the Gaza Strip bearing a heavy 20 kilogram (44 pound) warhead struck a house in the southern city of Beersheba, causing significant damage to the structure.

The residents were spared injury as they had rushed into their bomb shelter after the incoming rocket siren sounded in the city.

A second rocket was also fired from the Gaza Strip on Thursday morning. It landed off the coast of the greater Tel Aviv area, known in Israel as Gush Dan.

How did Hamas get hold of the advanced Tornado-G Grad missiles aimed at Beersheba and Greater Tel Aviv early Wednesday, Oct. 17? Serious casualties and more extensive damage were only avoided by good luck when one of the missiles wrecked a home in Beersheba and the second landed in the sea. These improved Grad types are serious deadly weapons, carrying boosted warheads containing 70-80 kilos of explosives to a distance of 40-60km. They are copies of the high-explosive fragmentation of HE-FRAG  warheads, and made their first appearance in Palestinian terrorist hand in Gaza on Wednesday.

Were Israel’s government heads and security chiefs over-preoccupied with the never-ending Egyptian efforts to mediate a truce? Is that why they missed Hamas’ and the pro-Iranian Islamic Jihad’s preparations in Gaza to catch the IDF off guard, trusting Israeli officers to obey official directives to avoid any major escalation.

The IDF and defense ministry spokesman claim this missile is the product of Palestinian workshops in Gaza. This is highly unlikely. The two missiles fired Wednesday were fitted with sophisticated automatic positioning navigation, a capability which neither Hamas nor Jihad has been able to manufacture unaided. They were most likely smuggled into the Gaza Strip through Sinai and supplied by Iran or fellow terrorist groups in eastern Libya. The synchronized launch of two advanced missiles in opposite directions – east to Beersheba and north to the Tel Aviv district – called for professional preparation, advanced training and precise coordination between two missile teams. How come all this was missed by the IDF’s intelligence watchers and the country was left to be caught by surprise?

After the event, a senior IDF officer admitted when asked why Iron Dome did not respond, that even that wonder system is “not hermetic.” But he did not explain how one of the Palestinian missiles missed buildings in the Tel Aviv district – not because it was intercepted , but because it was mis-aimed and fell in the sea, nor how all the city’s alert sirens were silent.

These are extremely worrying questions and the citizens of Israel deserve, and should demand, a clear answer from the authorities. As I look back through my blog I find we have been through this same scenario, of Hamas escalation and Israeli dithering, and finally hitting back, but never with enough force to delivery a fatal blow, and then the whole merry-go-round starts up again.  We did this in 2012 and 2014 and most likely in 2009 and 2006 too, though my blog doesn’t go back that far.

In this respect, and also in respect of the non-response to the terrible arson caused by Hamas in Israel’s southern communities, the blogger Vic Rosenthal, aka Abu Yehuda, writes a very pertinent column on fulfilling the social contract:

Some of the minimal benefits that a population expects from its government include enforcement of the laws (which must be chosen by the people), provision of services that don’t lend themselves to private enterprise, and protection from attacks from outside the community. In return, the population usually agrees to give up the option of using force or taking the law into its own hands, and agrees to support the government by paying taxes.

Here in Israel the administration is not quite as incompetent (or treasonous) as Obama’s, but is still failing to hold up its side of the social contract. In particular, segments of Israel’s population are being exposed to carefully calibrated terrorism short of war, and the government and the army that it commands are not taking actions adequate to protect them.

The communities located near the border with the Gaza Strip are being attacked with dozens of incendiary and explosive devices attached to balloons launched every day from Gaza. These devices have already burned hundreds of acres of land which is used by farmers or which is part of nature reserves – that is, the property of the people of Israel – and have endangered the communities, many of which are only a few hundred meters from the border. The residents are being sickened by the smoke from tires burned continuously by the Gazans. Incendiary or explosive balloons from Gaza have been found as far north as Givat Brenner, not far from Rehovot. In a worrisome development, there are now almost nightly incursions of armed Palestinian guerrillas through the border fence. So far the army has stopped them, but they would not have to get very far for the consequences to be tragic.

The Gazans have put teenagers and even younger children in their teams that launch the balloons, and the IDF will not shoot at them (IAF helicopters or drones have fired missiles nearby to scare them, but since they understand that they are not actually targeted, it just increases the fun).

There are lots of reasons – that is, excuses – for why the government and the army is unable or unwilling to put an end to the terrorism that is hurting its people. But the job of finding solutions is not the job of the people; it belongs to government officials and military officers, and the people have a right to expect that the political/military establishment that it is paying so generously do its job and eliminate the threat. That is, after all, in the social contract.

Read the whole article. Vic hits the nail right on the head with this article.

And just to bring the whole scenario into stark focus, here is Israeli journalist and social commentator Sivan Rahav Meir talking about Beer Sheva which just happens to feature in this week’s Parshat shavua (Torah portion):

Be’er Sheva. Avraham Avinu plants an ESHEL (אשל; a Tamarisk tree) in the Book of Genesis, and our commentators explain: ESHEL in Hebrew is an acronym of eating, drinking, accompanying (אכילה, שתייה, לוויה). Avraham is founding a new model there, that of life and chessed (charitable acts). Giving another person something to eat and something to drink, and accompanying guests when they leave. This is how he started spreading his revolutionary worldview to the world. Not with scholarly lectures about faith in One G-d, but with impressive behavior which stems from this faith. As opposed to the attempt to build the strong, tall Tower of Babel, which would reach the heavens, Avraham built a simple, modest tent, which was open on all directions, to whomever needed something. In the end, his tent is much more enduring – it’s eternal.
The first Shabbats I ever observed in my life were in Be’er Sheva, with beautiful, hospitable families. And this morning – a direct rocket hit on a house in Be’er Sheva. Baruch HaShem, there were no casualties, but property was damaged and of course, a lot of panic ensued.
In the ongoing conflict, the same question reverberates since those days until now: How do you live in this Land? Do you run after three strangers in order to cordially welcome them to your home, or do you shoot a rocket in the middle of the night, intentionally, towards a civilian population?

We know what our answer would be. And unfortunately we know what the answer of our enemies would be. We saw it last night and I’m afraid we shall keep seeing it until they are finally and totally defeated. And I do not believe that is going to happen any time soon.