The insane lunacy of the anti-Zionist Left

In their zeal to avoid accepting any kind of Zionism ever, anywhere, any time or any place, the anti-Zionists (yeah, lets call them antisemites for short) are turning themselves inside out and devouring their own in their desperate attempt to not only deny any legitimacy to Zionism, but to avoid even minimal contact with Zionists so as not to be “contaminated” by them. Sounds like classic antisemitism? It is exactly that, in a new dressing.

A classic example of this lunacy was demonstrated just this past week. First look at this amazing post by Joseph Cohen of the Israel Advocacy Movement, about the person he met at the Al Quds March in London two weeks ago:

Found a Spurs fan at the al-Quds march 😮😉#YidArmy

This time a courageous woman whose Muslim father was born in Jerusalem spent 40 mime discussing how we could find peace.

Such a surprisingly positive experience.

The woman he met, Zena Abdullatif, herself posted about the meeting on her Facebook page:

And then the trouble began.

The reaction of the Jews and Israel supporters? “What a great meeting!”. “Nice surprise!”. In short, the Jews and their supporters approved of this civilised meeting between a British Palestinian and a British Jew, and the fact they could talk to each other in a polite and unthreatening manner despite not agreeing with each others’ positions.

The reaction of the Palestinian supporters however? Terrifying, especially for Zina, the brave lady who talked to Joseph Cohen. David Collier wrote about the initial blowback that Zena received from her erstwhile supporters, which entailed severe condemnation for her having the gall to speak to a Zionist. As if just speaking to a Zionist contaminates her for life:

What happens when an anti-Israel activist takes a leap of faith and opens a positive dialogue with a Zionist? Well – here is one story.

Seeing a ‘Zionist’ as anything other than the ‘devil’ is anathema to the anti-Israel movement. Zena had made a mistake, she had painted a ‘Zionist’ as human and then publicly shared this with her friends. In their eyes she may as well have become an IDF soldier. The response to her Facebook post was swift and vicious. One of the first to comment was Kevin Stead:

But much of the attack focused on Zina. She was told she was stupid, easily manipulated and what she was saying would ‘disgust’ and ‘shame’ real activists. ‘Brainwashed’ was a word floated around a lot and she was openly ridiculed. Dozens and dozens of posts calling her out. Eventually, battered and bruised, Zina opened another post trying to explain herself – and the attacks continued there. Several of those who were attacking her are known to me through my research into antisemitism. Some of the messages directly contained pure antisemitism – like this ‘star of satanism’ post:

What was visible on Facebook is of course only part of the story. It was clear that Zina was receiving private messages too. Only she knows how many. Her response on Facebook began as defiant, but little by little she was worn down by some of the hundreds of negative responses she received. She deleted the original post and the others where she had stood defiant. There was partial retraction, talk about ‘making mistakes’ and eventually she broke.

The truth is that I do not know a single Zionist, that would attack me for opening dialogue with the ‘other side’. Building bridges, having dialogue is a central part of our ideology. If you are telling the truth, if you are on the side of ‘right’, then speaking about it with those who disagree with you is always going to be a basic part of your strategy. The only ones who are afraid of talking are those who have an ideology built on shaky pillars.

Zina’s crime was that she spoke to a Zionist. She didn’t agree with him, she held her ground and did no more than see positive in the dialogue itself. For one brief moment she showed the courage to question and for anti-Israel activism this is an unspeakable crime. Any attempt by ‘our side’ to reach out to her, will be seen as a further attempt to brainwash. The only change can come from within and all dissent is instantly silenced.

How on earth is it possible to build bridges with such a twisted ideology of blind hate? The answer of course is that it isn’t possible. Zina and people like her are locked inside the bubble unable to get out. The mid-way point does not exist. They are caught in a pincer movement between Islamic antisemitism and western antisemitism. You either see Zionists as inhumane or you cannot stand with ‘the cause’. When courage speaks up – it is vilified. This is why even after seventy years there is no peace, nor any sign of it on the horizon.

Make no mistake. Zena is no proto-Zionist. She is a hard-core Palestine-supporter, as David Collier notes:

Zina is no half-hearted activist. She manages the ‘Palestine Issue Magazine’ on Facebook, which has over 19000 followers. The page regularly uses terms like ‘Apartheid’ and ‘Genocide’, as it pushes an ‘Electronic Intifada’ version of politics and history. Shortly before she had uploaded the positive message about Joseph, Zina had posted a ‘love this’ comment alongside a video of the Neturei Karta burning an Israeli flag. As for antisemitism, her own page is devoid of Mossad or Rothschild conspiracy. Having said that, in her world, Israel is a racist endeavour and the word ‘Zionist’ is clearly a ‘curse word’.

But that pro-Palestine CV is not enough to save Zena from the hatred of the anti-Israel lunatics. In his follow-up post David Collier documents Zina’s hounding by her erstwhile “friends”, to the extent that she had to call in the police. David compiled a YouTube video based on a Facebook video in which Zena described the harrassment:

Yet more anti-Jewish hatred and lunacy was on display at the Washington “Dyke March” (how I hate that title). Just like in previous years, Jewish Pride flags were disallowed because they displayed the Magen David! How is that a sign of hate? Well, the Israeli flag has a Magen David, so a Magen David appearing anywhere at all – even on a necklace, or maybe a tombstone, or a synagogue, would be a hate symbol…. or something like that (roll eyes here).

The anti-Israel left is so insane that they cannot separate a Jewish symbol from an Israeli symbol – which in any event does not represent hatred at all. Moreover hundreds of other countries have religious symbols on their flags. Think of any Muslim country, or Switzerland or England with their crosses…. you get the picture.

Israellycool has the story:

The flag was not the flag of Israel, but only a flag with the Star of David, the religious symbol of Judaism. Had a Muslim dyke carried a flag with the Crescent Moon on it, do you think anyone would have dared demand it be removed (despite the fact most of the countries with that symbol on it treat gay people abominably)?

It’s not just the lunatic left however. The equally lunatic evil far right were caught desecrating an Israeli flag at the Detroit pride rally.

As Dave of Israellycool notes,

Jews continue to be the whipping boys and girls, even within already marginalized communities.

Another example of the insane conspiratorial way of thinking is the way presenter Adam McKola talked about Israeli star actress Gal Gadot: 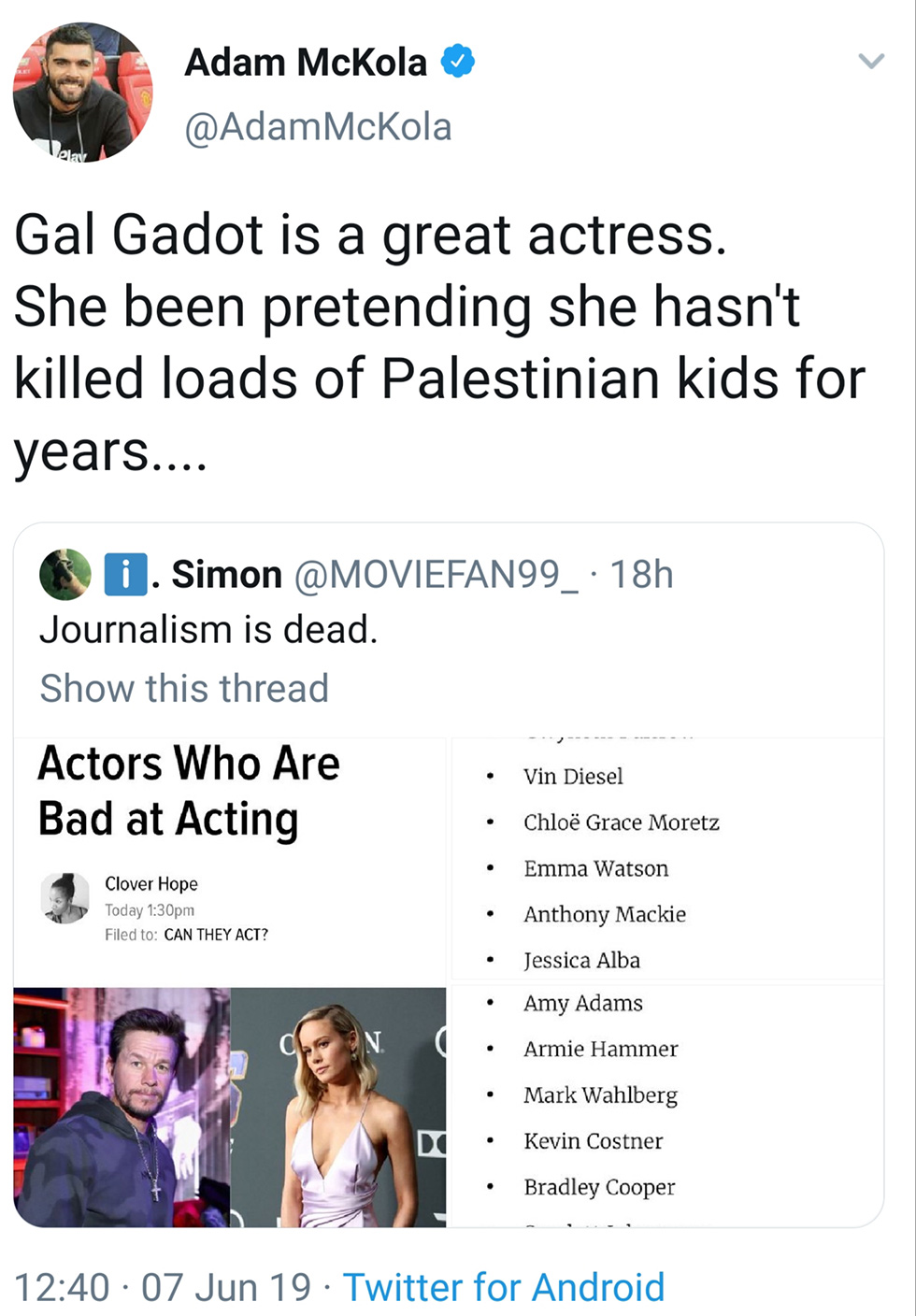 What a disgusting thing to say, all because Gal Gadot fulfilled her civic duty and served – in a non-combat role – in the IDF.  The Israel haters simply cannot help themselves and go into a Pavlovian response at the mere sound of the word “Israel”.

Thankfully today the Jewish community no longer takes these insults lying down, and protested the slander to McKola’s employer:

As soon as we were made aware of the tweets, we informed the agency we use that Adam Mckola was to no longer represent JD and we asked that he remove any association with us from his profile. We will be no longer working with him.

And all this is without mentioning the Jew-hatred that has now thoroughly infiltrated the British Labour Party, to the extent that an antisemite was elected this week to represent Peterborough in Parliament:

British Jews are protesting the election to Parliament of a candidate for the Labour party who “liked” a Facebook post saying Prime Minister Theresa May has a “Zionist Slave Masters agenda”, JTA reports.

The lawmaker, Lisa Forbes, on Thursday won a special election in the eastern English city of Peterborough, defeating a Brexit Party candidate and leaving the Conservative Party candidate far behind.

The Peterborough vote was held after the constituency’s former representative in the House of Common was jailed for lying over a speeding offence.

After Forbes was nominated the Labour candidate, it emerged that in April she had “liked” a post making the assertion about May. In 2014, she praised a post that repeated the conspiracy theory that the Mossad and CIA are behind the Islamic State terror group.

“I have enjoyed reading this thread so much,” she wrote about the 2014 post.

In a statement on Friday, the Board of Deputies of British Jews wrote the case typifies Labour’s spiraling anti-Semitism problem, which last month led the country’s foremost government watchdog on racism to initiate an official probe of Labour.

Forbes said the controversy over the “Zionist Slave Masters” was the result of a misunderstanding.

“I actually liked a video of children praying about what had happened in New Zealand and hadn’t paid much attention to the text above,” she wrote in a statement.

She did not address the 2014 post, which had no video.

“I’m really sorry. I just hope that people will understand that I don’t have a bad bone in my body towards any race of people and anti-Semitism is just something I condemn completely,” she added, according to JTA.

It’s a very strange situation that we Jews are in. On the one hand, outside of Israel, Jews are mocked, villified, harrassed and attacked. Jewish institutions everywhere need strong security including security guards, bars on windows, alarms, metal detectors, bullet-proof windows and doors and more. Yet Israel’s position in the world has never been better in the past 2,000 years! Yes, we are surrounded by murderous enemies and in international forums we are constantly attacked. And yes, we have our internal problems like any other country. But our economy is thriving, our army is strong and our population is for the most part happy and thriving.

Maybe that is the lesson that we need to learn.

5 Responses to The insane lunacy of the anti-Zionist Left