There has been terrible news today. Rina Schnerb, age 17, was killed today by a Palestinian terrorist explosive device as she, her father and her brother were hiking next to a natural spring in Dolev, in the Binyamin region. 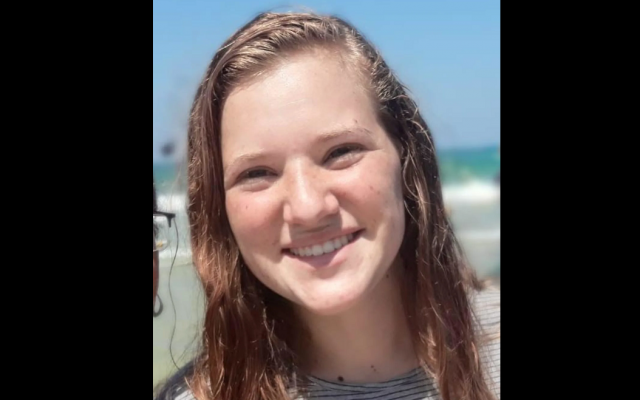 Her father has been moderately injured but her brother is very severely injured. Rina’s funeral is taking place right now in her hometown of Lod, next to Tel Aviv.

A teenage girl was killed and her father and brother were seriously injured in a terrorist bombing at a natural spring outside the central West Bank settlement of Dolev on Friday morning, Israeli officials said.

Rina Shnerb, 17, of Lod, was critically wounded in the attack and received treatment at the scene from civilian and military medics before being pronounced dead of her injuries. Her father Eitan, a rabbi in Lod, and brother Dvir, 19, were taken by military helicopter to a Jerusalem hospital in serious condition, the Magen David Adom ambulance service said.

The army said an improvised explosive device was used in the attack. Police sappers determined that the bomb had been planted earlier at the spring and was triggered remotely when the family approached it.

Troops were working to find the terrorists behind the attack as quickly as possible, under the general understanding that the more time they have to flee, the more difficult the search effort becomes.

“Security force are in pursuit of the vile terrorists. We will reach them. Our long arm will pay them their dues,” Netanyahu said.

The explosion occurred at the Bubin spring — a popular hiking spot — approximately 10 kilometers east of the city of Modiin.

“Our surroundings are full of natural springs and hiking to them is an inseparable part of residents’ lives,” Yael, a resident of Dolev, told Channel 12 news. “There is a difficult feeling.”

She said a bomb attack was “a severe escalation” the likes of which the community had not encountered “in over 20 years.”

The father and son were taken to Jerusalem’s Hadassah Hospital Ein Kerem for treatment, MDA said.

A hospital spokesperson said the father was now considered to be in moderate, stable condition. The 19-year-old son sustained injuries throughout his body, including to his stomach, from the blast. He was unconscious and connected to a respirator.

Rina Hy’d was laid to rest this afternoon in Lod: (there is a heartrending video at the link):

Rabbi Eitan told Netanyahu that his message is to strengthen the Torah and the Land of Israel: “We are here two thousand years, we will come out of this stronger.” His murdered daughter, he said, is “one of those killed for the kingdom of Israel.”

Netanyahu wished Rabbi Eitan much strength and deep condolences, and wished him and his injured son speedy recoveries. Netanyahu also said that security forces are working hard to hunt down the terrorists, promising that the terrorists would be caught.

Earlier on Friday, it was reported that Rabbi Eitan, 46, attempted to save his daughter and resuscitate her. Afterwards, he used his tzitzit (four-cornered religious garment) to create a makeshift tourniquet for his 19-year-old son, Dvir Haim, who suffered serious injuries in the attack.

Shmulik Shenhav, Shnerb’s uncle, spoke of the attack: “Eitan is also a paramedic, and he attempted to revive and aid Rina, but it was too late. He took off his tzitzit, and with the tzitzit he created a tourniquet for Dvir, to stop the bleeding from shrapnel which had entered his arm.”

Dr. Abed Khaleila, a senior surgeon at Hadassah Ein Kerem Hospital, operated on Dvir Haim and reported that the surgery was successful. Dvir is in serious condition, but he is stable and there is no immediate threat to his life. He was transferred to the intensive care unit for observation and treatment.

May the family be comforted among the mourners of Zion and Jerusalem. Wishing refuah shlema to Rabbi Eitan Schnerb and his son Dvir Chaim ben Shira Esther.

Last Friday there was another terror attack, a car ramming in which here too, a brother and sister were severely injured. This took place outside Elazar in Gush Etzion. The siblings are still hospitalized in serious condition.

Nahum Nevis, 17, and his 19-year-old sister Noam were hit by a car Friday as they waited for a bus outside the Elazar settlement.

The car rolled over after the terror attack, and when the assailant tried to emerge from it, he was shot dead by an off duty police officer who was driving behind him.

While Nahum remained sedated and hooked up to a respirator, the Walla news site reported a slight improvement in Noam’s condition as she was transferred from Shaare Zedek Medical Center to Hadassah Ein Kerem Hospital, where her brother is.

The director of Hadassah, prof. Yoram Weiss said Friday Nahum had suffered a skull fracture and a brain injury. Doctors at Shaare Zedek said Noam had injuries to her limbs.

The siblings are residents of Elazar.

Elazar is a settlement adjacent to Migdal Oz in the Etzion Bloc, where yeshiva student Dvir Sorek was stabbed to death last week in a suspected terror attack. Also nearby is the Etzion Junction, which has seen multiple fatal terror attacks in recent years.

The assailants were shot by security forces. One of them was pronounced dead at the scene; the second was critically wounded and taken to the hospital.

On Friday, Shaare Zedek, where the officer was being treated, said his condition had improved.

With all these incidents weighing on my mind I simply cannot bring myself to write any good news. Contrary to my usual habit, the good news post will wait till after Shabbat. Instead, I will simply bring you this beautiful video of “Nachamu” – Comfort ye my people. The words are the first words of last week’s Haftara, read in the synagogue after Tisha B’Av.

Comfort ye, Comfort ye My People, your G-d will tell you
Speak to the heart of Jerusalem and call to her.

May we all have a quiet safe Shabbat, and may the coming week bring only good news.