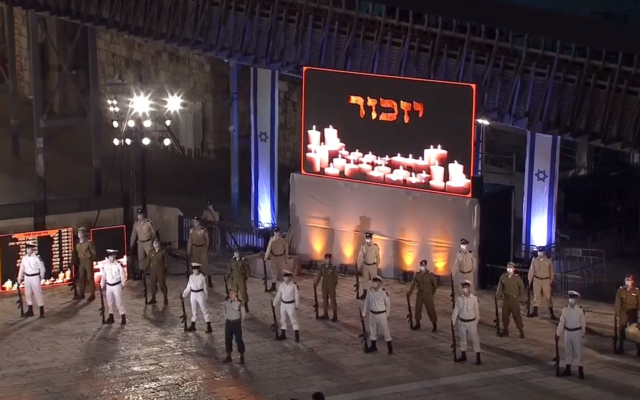 Soldiers wearing masks stand at attention at the national opening ceremony for Israel’s Memorial Day for fallen soldiers and victims of terror, at the Western Wall in Jerusalem, April 27, 2020, (video screenshot)

Yom Hazikaron, Israel’s Memorial Day for fallen soldiers and victims of terror, began last night at sundown with the sound of the siren, as Israel commemorated its fallen with a one minute siren at 8 pm and a surreal ceremony at the Kotel, where – due to the constraints of the coronavirus – all the participants wore face-masks and there was no audience. Instead, the ceremony was broadcast live and livestreamed on all media.

The extraordinary circumstances made for some stark imagery, with soldiers wearing protective face masks standing at attention in the nearly empty plaza. 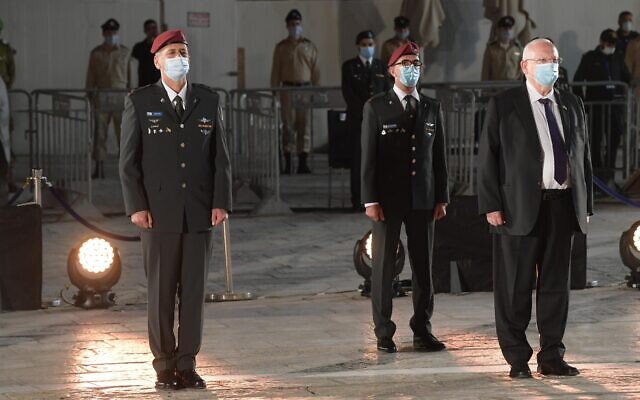 As he began his televised speech, President Reuven Rivlin’s voice cracked as he addressed bereaved families unable to attend.

“This year, you are alone in your rooms, listening to the echoes of their voices. We cannot come to your homes, we cannot stand alongside you at the military cemeteries. We cannot embrace you,” he said.

The siren “shatters the silence and breaks our hearts,” he added.

Rivlin acknowledged the difficulty for families after losing their loved ones, with many asking themselves why carry on.

“You battle every day for life… And now comes this disease, and it suddenly feels as if the world is turning more slowly,” he said.

“I know, dear families, you don’t need Memorial Day to remember… Today is for us, so that we can — even for a moment — get to know the names and the faces, the lives and the stories of the sons and daughters of this country, of your beloveds, which will become ours.

But Israel will remember “the unfathomable price” that was paid in human lives for Israel to exist, Rivlin vowed. 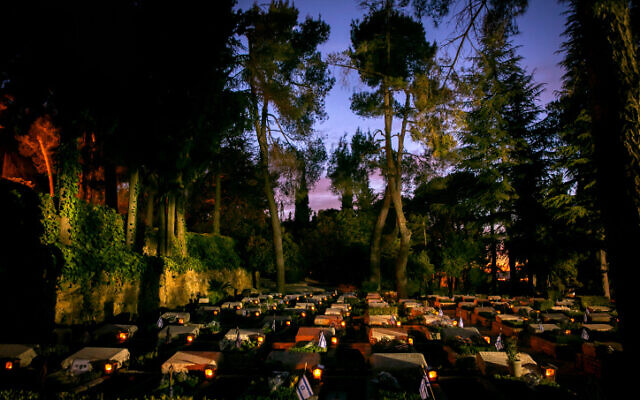 Candles are seen at the graves of fallen soldiers, at the Mount Herzl Military Cemetery on April 27, 2020. Cemeteries were shut Monday to prevent the spread of coronavirus (Olivier Fitoussi/Flash90)

Speaking after Rivlin, IDF Chief of Staff Aviv Kohavi noted the difficulty of commemorating Memorial Day in the time of coronavirus.

“Bereaved families, even now, despite the distance, all of Israel is with you, through all kinds of screens. Every person in their home is stopping, is sympathizing, is dedicating time to the memory of your sons and daughters,” Kohavi said.

“These are complicated times, which bring worry and concern from the lingering danger. A time of crisis is like a time of war, it pushes aside the trivial and minor and makes the important things, the ethical things and the sanctity of life stand out,” he said.

In his speech, Kohavi also warned Israel’s enemies that the military would be there to confront them.

“Against enemies and armies of terror who don’t stop harming the citizens of the State of Israel — the IDF is there: ready, powerful and aggressive. We will be there for every mission, prepared and determined, and we see victory as the only way to achieve our goal,” the army chief said.

Earlier Monday, military cemeteries were shut to bereaved families, for the first time on Memorial day, to prevent the spread of the coronavirus..

Because the cemeteries were to be closed on Memorial Day today new traditions had to be invented or adopted, as bereaved families went earlier to visit the graves of their loved ones.

Another new corona-era tradition has been singing on balconies. Last night Israelis were urged to go out on their balconies or stand by their windows and sing the Hatikva, Israel’s national anthem, along with the Chief Cantor of the IDF. Here is the beautiful result, each clip being from another town across the country:

On Yom Hazikaron we must remember not only those who fell, but those who are still missing. Tzur Goldin, the twin brother of Hadar Goldin Hy’d who fell in battle in Gaza in 2014, and whose body is still being held by Hamas, pleads that his brother’s body, and those of other MIA, should not be left behind:

In 2014, a UN-US brokered ceasefire brought a pause to the fighting in Operation Protective Edge. During that ceasefire, my twin brother, Hadar, of blessed memory, a lieutenant operating inside Gaza at the time, was ambushed, killed and kidnapped by Hamas terrorists. His body is yet to be returned to Israel for burial. 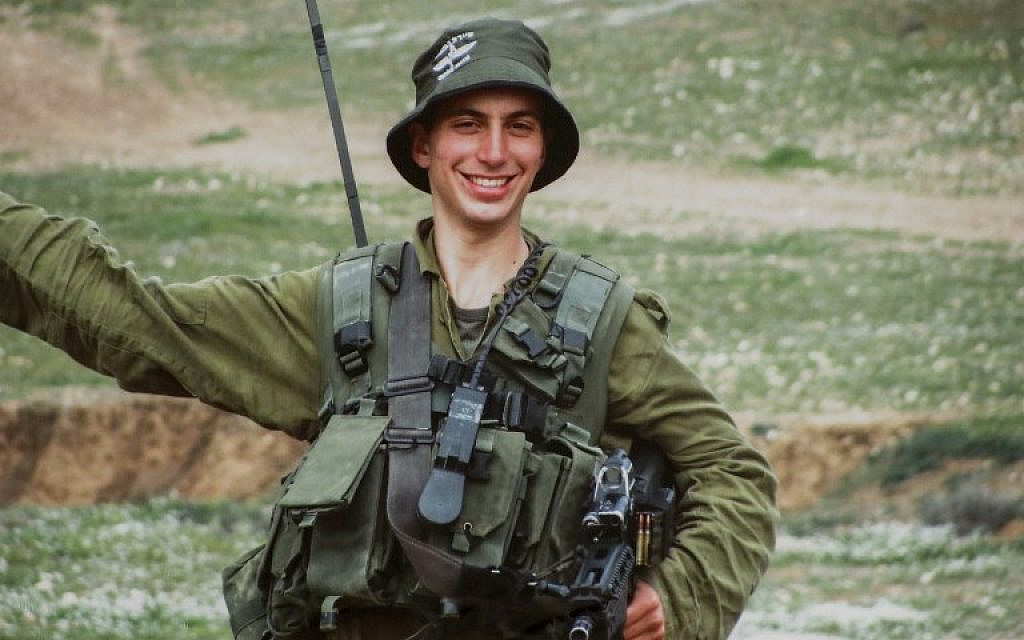 This picture taken on August 29, 2018 shows a photo of Lieutenant Hadar Goldin taken while on army duty, as shown by his parents at their family home in Kfar Saba. (AFP PHOTO / JACK GUEZ)

Hamas also still holds the body of Oron Shaul, another soldier from the same operation, along with living Israeli citizens, who are held captive by this terror organization.

Those realities shape what Israeli Remembrance Day means to me.

I never imagined becoming one of the community of bereaved families; a community made up of those who never sought to become members. The years since Hadar was killed and kidnapped have been years of pain for me. Yet our family is not only bereaved. We are also captive to a dreadful limbo as we wait for Hadar to be returned home.

We will forever be bereaved. Our mission is to cease being captives.

On Memorial Day, the value we must recall above all others, is that of our common duty to fight for the return of every soldier and civilian in captivity, dead or alive.

I too fought in Operation Protective Edge. Hadar and I were operating a mere 500 meters from one another during the fighting. I know the mindset of a soldier. Soldiers go into battle, knowingly endangering their lives, and they think of their families at home and wonder how they would cope if something were to happen. Yet soldiers also derive strength from the knowledge that their brothers in arms will do all it takes in order to bring them back to Israel if they are injured, or if the worst should happen.

Since the storied Entebbe raid of 1976, the State of Israel has been in a fight against the terrorism of kidnapping. Terror organizations have created an equation: they kidnap soldiers and civilians and exploit them as an asset and Israel pays a pyrrhic price, time and again, in order to gain their release.

They also force Israel to choose between two types of moral injustice: leave soldiers on the battlefield – effectively the case for Hadar – or release thousands of terrorists in exchange for the return of our soldiers.

My family and I believe in a third way.

Terror organizations must be made to realize that the kidnapping of soldiers or civilians is a liability for them, not an asset. We must make them understand that it is they who will pay a price, not us. In order to shift the paradigm, measures to improve the humanitarian situation inside Gaza must not be undertaken until our captives are returned.

The mission of my family is to ensure that the national sacrifice – the one we speak of during Israeli Remembrance Day – remains tied to national solidarity. My brother, Hadar, and Oron Shaul, and all other captives, must come home, and no terrorists must be exchanged for their release. Achieving that goal, which is possible, will save a great many lives in the future.

Hamas cannot have it both ways. It cannot be the beneficiary of humanitarian solutions while simultaneously engaging in acts of terrorism.

On this day, I think about my brother Hadar. I think about Oron Shaul. I think of the soldiers who never returned from Gaza and the Israeli civilians being held captive there. I think of Ron Arad and every one of our MIAs, and I think of how important it is that the principle of no soldier being left behind is a principle we must not leave behind, for the good of the rest of the world and for all future generations of Israel’s soldiers.

May the memory of Israel’s fallen be a blessing.

The pain of the Goldin family and of the families of the other MIA’s is unfathomable to us. Not only have they lost their loved one, but they have no closure, no grave to visit or to mourn at.  It is high time our leaders stopped playing games with terrorist organizations.

There are many sites, some official and some grassroots initiatives, to commemorate the fallen soldiers. Here is also a government-run Yizkor page where you can light a virtual candle in memory of fallen soldiers and victims of terrorism.

In these days of mutual acrimony, when we are trying so hard to unite the different sectors of our nation, there is also a wonderful initiative, called Pray and Remember, set up by Haredim who are saying Tehillim (Psalms) in memory of the fallen soldiers.  We can pray at the same time that this will help heal the rifts in our society.

Let me conclude with some words of hope and optimism from the wonderful, inspirational Rabbi Jonathan Sacks, words which clarify so sharply that our soldiers and terror victims did not die in vain.

As we approach #YomHaZikaron & #YomHaAtzmaut here is a trailer for a double CD of words & music about #Israel that my office produced in 2008 called #IsraelHomeOfHope. Downloaded now (money goes to tzedakah) -> https://t.co/ihY0f9wSEr. More details -> https://t.co/w34ASrEhdj. pic.twitter.com/I1NhcrTJ10