Some good news for Lag Ba’Omer

Today is Lag Ba”Omer, the 33rd day of the Omer, a semi-holiday marked by bonfires in the night, music and a popular day for weddings. This year, because of the coronavirus restrictions, bonfires were banned except in a very few specified places with a minimal number of participants, and weddings have only just been permitted again by the authorities, also with a very small number of participants and held outdoors.

However since this is a happy day I thought it would be appropriate to post some good news (which I haven’t done for quite a while now).

First some good news concerning corona: not only are Israel’s statistics in fighting the virus extremely good, enabling a slow (or maybe not slow enough) “exit” from the lockdown, but Israel is at the forefront of fighting methods to combat the disease (via Reality):

An Israeli air-filter could help capture and destroy corona particles:

A team of scientists and engineers in Israel have developed a carbon-based filter that can capture and destroy a strain of animal coronavirus, the Cambridge Independent news site reported.

…
Called TorStran, the thin carbon nanotube mat has the properties of filtration and air permeability that allow it to capture molecules in airborne droplets. The fact that it can filter and disrupt the virus at the same time can potentially make it an effective tool to reduce the risk of infection by removing contamination from the air.

The company, Maalot Tarshiha-based Tortech Nano Fibers, said it plans to rapidly prototype and test the product to help with shortages of protective equipment due to the coronavirus pandemic, the report said.

Similarly, an Israeli mask with a unique anti-pathogen fabric has entered the US market:

The Israeli startup Sonovia, which sped up efforts to manufacture masks using its anti-pathogen fabric at the start of the coronavirus crisis in Israel, has launched commercial sales.

The company’s technology is based on a lab-scale sonochemical process that was developed at Bar-Ilan University. Sonovia started manufacturing its product in March at a plant near Nahariya when Israel had only 200 patients, and has sold 30,000 masks. Most of its clients are distributors and nonprofits in the United States.

“The technology is based upon a physical phenomenon called cavitation,” said Migdal. “Sound waves are used to physically infuse desired chemicals onto the structure area of materials, enhancing them with clinically proven antiviral and antibacterial properties.”

Sonovia uses lower-cost, metal-oxide nanoparticles, including zinc oxide and copper oxide, to impart antibacterial protection. Research conducted through a grant by the European Union, in conjunction with 16 partners from 10 European countries, found the one-step process to be effective. Ultrasonic irradiation causes the formation of antimicrobial metal-oxide nanoparticles and actively impregnates them into textile fibers. Moreover, those fabrics impregnated with the zinc and copper oxides were shown to retain significant antibacterial activity even after 100 wash cycles at 75ºC or 65 wash cycles at 92ºC.

Kol hakavod to these two companies! May their inventions prove to be successful and thus help save countless lives.

Israel has every reason to be proud of the way it has handled the corona crisis, from the intial quarantining of travellers, to contact tracing, tracing the movements of infected people to prevent further infections, isolation of infected people in “coronal hotels” and the general obedience of the Israeli public (not a given at any time!) to the rules including wearing masks and social distancing.

So it is gratifying for us to be included in a potential “first movers” club, a group of seven nations that have largely overcome the virus and wish to cooperate on travel, trade and other international cooperations:

Australia now has a roadmap out of the COVID-19 crisis, but helping guide the way is input from a group of nations across the world that have been dubbed the “first movers”.

The eclectic group of countries — which counts Israel, Greece, Denmark, and New Zealand among its members — is swapping tips along the path out of the crisis.

See this short video on this subject:

And now, to return to this special day, here is some very timely good news: a rare Bar Kochba Revolt* coin has been found at the foot of the Temple Mount: (* An explanation of the Revolt is at the end of this excerpt):

In honor of Lag B’Omer, the Israel Antiquities Authority presents this rare bronze coin from the period of the Bar Kokhva revolt (circa 132 CE), which was discovered in archaeological excavations of the IAA in the William Davidson Archaeological Park, under the supervision of the Company for the Reconstruction and Development of the Jewish Quarter in the Old City of Jerusalem, Ltd. located between the Temple Mount and the City of David. The excavations are conducted by the IAA and funded by the Ir David Foundation (Elad), which operates the site. 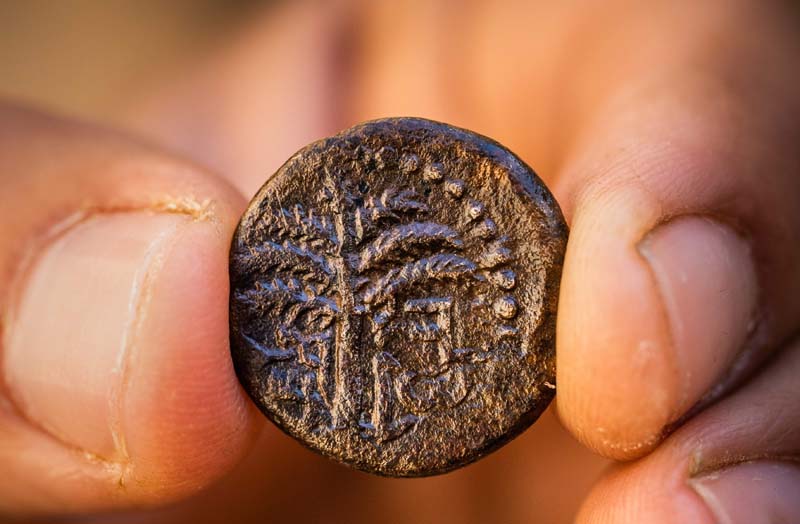 Coins from the period of the Bar Kokhva revolt, declaring the rebels’ goal of liberating Jerusalem from Roman occupation after the destruction of the city, are relatively common. The discovery of these coins helps researchers map out the revolt, which took place approximately 1,890 years ago. It is interesting to note that the rebels minted these revolt coins on Roman coins with stripped or damaged faces. The revolt coins featured the Temple facade, trumpets, a harp, as well as the inscriptions: “Redemption of Israel” and “Freedom of Israel.”

In the archaeological and historical research based on the testimony of the Roman historian Cassius Dio, it is accepted that the Bar Kokhva revolt broke out in 132 CE, after Emperor Hadrian declared the establishment of a Roman colony called “Aelia Capitolina” in Judea. This colony was built on the ruins of Jewish Jerusalem and began with the construction of a temple dedicated to the god Jupiter on the Temple Mount. The establishment of the Roman city and the construction of an idolatrous temple in place of the Jewish Temple, in addition to restrictive religious decrees, distressed the Jewish population that had remained in Judea. They launched a widespread revolt against the Roman government under the leadership of Shimon Ben-Koziva, known as “Bar Kokhva.” The revolt lasted about five years, causing heavy casualties among the Roman legions – so much so that they had to deploy large military units from around the Roman Empire to complete their ranks. The revolt ended with the destruction of hundreds of Jewish communities and villages. However, Bar Kokhva remains etched in the memory of the Jewish nation as a historical hero.

Sadly today another Jewish hero fell in battle: Sgt. Amit Ben Yigal was killed by a rock thrown at his head by a terrorist during an arrest in a Palestinian village. May Hashem avenge his blood and may his family be comforted amongst the mourners of Zion and Jerusalem.

Just as the Bar Kochba Revolt ultimately failed, the Jewish people were not vanquished, and we have lived to rebuild our home in our holy Land of Israel. May the death of Sgt. Amit Ben Yigal Hy’d also not be in vain, and may we merit to see the final Redemption.

2 Responses to Some good news for Lag Ba’Omer