Yom Hazikaron Service at the Kotel

Yom Hazikaron has begun just a short while ago, and with it the usual mix of sadness leading to joy a day later on Yom Haatzmaut (Independence Day).

Here are a few links to bring the atmosphere over to you.

The IDF blog has a beautiful article entitled “Mourning and Joy – the Israel Experience in 48 hours“.  Here is just a small excerpt but read the rest:

In a small country such as Israel, with a population of fewer than eight million people, a high percentage of families acutely feel the pain of Memorial Day. For example, in just one war, the War of Independence, Israel lost one percent of its population at the time. Everybody felt the loss in some way.

The Prime Minister, from a bereaved family himself, voiced his personal grief and called for national unity on Memorial Day.

President Shimon Peres and IDF Chief of Staff Benny Gantz addressed the audience at the ceremony at the Kotel:

Peres said that Israel’s amazing achievements have been made because of the sacrifices of the dead.

“Your sons and daughters will not return to you… Their bravery has left us alive, but their deaths have left us broken,” he said in his opening speech.

“The state of Israel, for which your children sacrificed their lives… is still threatened,” he said, adding that the IDF is more prepared than ever to defend Israeli citizens from any and all threats.

Speaking after Peres, IDF Chief of Staff Lt.-Gen. Benny Gantz called the IDF Israel’s wall of defense. “We live in a different Middle East than the one we used to,” he said, adding that “threats are rising all around us. In this precarious situation, we are witness to attempts by our enemies, near and far, to hurt us.

That said, Gantz praised his soldiers, saying that “while we are here, the IDF is out in the field, united around its goal to protect us.”

“The IDF is ready for every battle and every mission,” he stated.

The ceremony ended with a Jewish prayer for the fallen soldiers and the singing of Israel’s national anthem, Hatikva.

Taking us back to the origins of Yom Hazikaron, The Times of Israel has published an extraordinary 2-part series of the diary of a British clergyman who was caught in Jerusalem during the fierce fighting in May 1948 during Israel’s War of Independence.

The diary starts ominously with the words:

So much for foreign protection of civilians in Israel.

There are many references to Jewish “settlements”, aka  towns and villages existing in pre-state Israel, with no one claiming they were Palestinian territory. In fact they became known as “Palestinian” only after 1967 when the Israelis recaptured the territory.  As I have stated over and over on this blog, the Arabs and their supporters simply reverse chronology.

Another point that caught my attention was that there was no mention at all of “Palestine” or “Palestinians” unless referring to Israel and Israeli Jews.  Israel’s adversaries were simply called “Arabs”.  The Palestinian nation was only invented in the 1960s.  We must keep reminding ourselves, and more importantly the outside world, of this fact.  The Palestinians were invented purely to subvert Israel’s historical and legal status in the Land of Israel.

The full diary can be read here. Some more excerpts from the diary (with comments from the ToI’s story):

…  Reports of developments during the day outside the Compound included
the occupation of Allenby Square and the German Colony by the Jews, the
shelling of the Power Station in Tel Aviv by Egyptian aircraft and the
shelling of the Jewish Quarters in new Jerusalem by heavy guns, and the
fall of Jewish colonies near Hebron.

That day, Jones also reported hearing that the German Colony, outside the walls, had fallen to Jewish forces and that “Jewish colonies near Hebron” — the settlements of the Etzion Bloc — had been taken by Jordan’s Arab Legion, a major blow to the Jewish war effort.

The Etzion Bloc includes the present-day towns of Efrat, Kfar Etzion, Migdal Oz and Ein Tzurim. These are internationally derided as “occupied territory”, “land theft” etc.  The notes from this diary prove – as if further proof were necessary – that these towns were Israeli Jewish towns long before the Arabs appeared on the scene. The same story is repeated throughout Judea and Samaria (the West Bank).

Back to the diary:

Another very noisy night with the Arab Legion continuing mopping-up operations in the Old City. Considerable damage was done to the large Synagogue, the dome of which was practically demolished.

The “large Synagogue” was the Hurva, the most prominent landmark in the Jewish Quarter. Badly damaged in this attack, it would be finished off six days later. The Hurva would be rebuilt and reopened only 62 years later.

I will post pictures at the end of what the Hurva shul looked like before and after 1948, and how it looks today.

Back to Part II of the diary:

A very heavy explosion in the evening marked the end of the big Synagogue in the Old City, which completely disappeared.

The sound of distant heavy artillery was heard for many hours during the night.

King Abdullah visited Jerusalem today; entered the Tomb of Christ in the Church of the Holy Sepulchre, knelt inside and offered up the following prayer: “Lord Jesus, in the Name of all your prophets, Abraham, Isaac… give us the victory over the Jews, who have forsaken their religion.”

The chutzpah of King Abdullah is quite breathtaking – calling upon the Christian deity to assist the Muslims to kill the Jews because the Jews have sinned. I know I shouldn’t be shocked but I can’t help it.

Read the whole diary. It’s a fascinating piece of “live” history and puts the lie to so many myths.

And now for the photos of “the large synagogue”, aka the Hurva shul. The synagogue has a long and colourful, not to say chequered, history. These pictures represent the more modern stages: Note the facade – you will see it soon repeated today. Commemorative arch of the Hurva built after 1967

The above picture is all I ever knew or saw of the Hurva synagogue until last year. The following pictures were taken by me last year, except for the last one which was taken just a couple of weeks ago on Pesach.

Interior of the Hurva, the gallery inside the dome

Note the beautiful filigree railings and delicate paintings on the walls.

View from above, from inside the dome, of the Bima 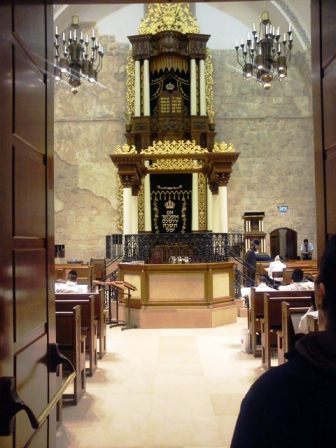 The Aron Hakodesh (Holy Ark) in the Hurva shul

And finally, an exterior view, taken 2 weeks ago. Note the same shape of the window as that of the building in the 1930s.

Exterior of the Hurva shul, April 2012

I apologize if I drifted off-topic somewhat here, but I feel that these pictures of the renewal of the Hurva synagogue symbolise everything that is Israel today, especially today of all days, Yom Hazikaron.

They destroy. We will build. And rebuild.

May the memory of our fallen be for a blessing for all of Am Yisrael. Yehi zichram baruch.